Pound Sterling had stabilised against the Euro by the close on Friday after retracing an earlier rally from 1.1557 around the open on Sunday to 1.1699 in the early hours of Wednesday morning and during the Asia session, until the bond market unravelled.

That was just shy of Pound Sterling Live’s armchair projection from last week, although GBP/EUR was undone mid-week when the Euro appeared to benefit from a capitulation of emerging market “carry trades,” prompted by the crescendo of a violent sell-off in bonds.

Emerging markets had been reinflated in recent weeks by Euro-funded and yield-hunting “carry trades,” closure of which asks Euro buying by default.

“This backup in yields is likely a speedbump rather than a roadblock,” says Mark McCormick, global head of FX strategy at TD Securities. “Markets will focus on Chair Powell's remarks on Thursday and top-tier data, including payrolls.”

Bond market upset left stocks and risk currencies under pressure ahead of the weekend even as the policy-important two-year segment of the U.S. ‘yield curve,’ a duration over which the Federal Reserve (Fed) likes to carefully calibrate borrowing costs, lost altitude.

Pound Sterling Live has its own theory about recent price action in Pound, which would imply that exaggerated bond market moves are to be expected, especially in a reflation minded environment where questions are being asked of policymakers’ commitments to propping up markets.

But with two-year U.S. yields back at the midpoint of the 0% to 0.25% Federal Funds rate by the close on Friday, and a host of Fed policymakers including Chairman Jerome Powell expected to speak later this week, Sterling is well positioned to benefit from any recovery among risk currencies.

"For now, we stay long Sterling vs both the EUR and CHF, while anticipating gains against the USD to 1.45," says Paul Robson, head of G10 FX strategy at Natwest Markets. “We closed our EUR/USD long position a few weeks ago in part because we felt that EUR would become a preferred funder for EMFX longs – to the extent that this has been occurring, EMFX positioning clearing may also be helping support the EUR and EUR crosses." 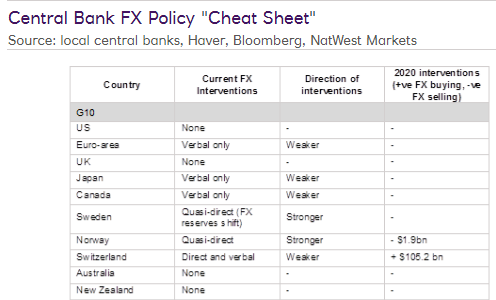 "Central banks stepped in to counter an aggressive selloff on bond markets but with mixed results," says Mathias Van der Jeugt, head of research at KBC Markets. "EUR/GBP rebounded from the 0.86 area yesterday and initially rallied further to trade north of 0.87. The Schnabel and Lane comments dented the pair, currently at 0.869, however. For EUR/GBP’s rebound to continue, it should at least close above 0.87 to break the downward trend channel. Bank of England chief economist Haldane thinks that there is a tangible risk that inflation proves more difficult to tame, requiring monetary policy makers to act more assertively than is currently priced into financial markets."

Pound Sterling remained a comparative outperformer even amid volatility in risk assets, having followed closely behind the U.S. Dollar, Euro and Chinese Yuan in the rankings for the week. This might remain the case if the Pound is at all interested in acting as a pressure release valve for the trade-weighted Euro, as it harries the upside risks to the Bank of England’s inflation target outlined by BoE chief economist Andy Haldane last week.

“This was as hawkish a speech as one could expect at this stage of the pandemic,” says Sanjay Raja, an economist at Deutsche Bank. “A successful recovery budget will be based on three pillars. The first is avoiding a jobs cliff-edge. The second is extending adequate household and business support. And the third is delivering structural reform via higher investment. Our best guess – at this stage – is that the Chancellor largely delivers on employment, household and business support, but falls short on the investment side.” 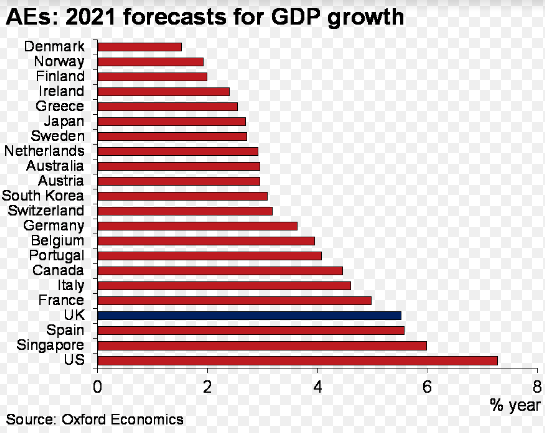 BoE rate setters are increasingly conscious of upside risks to their inflation target rather than those on the downside, a policy predicament where a rally in its exchange rates could serve a virtuous purpose by eating at import costs. Meanwhile, the opposite is true with the European Central Bank (ECB), which has recently aired concerns about too high exchange rates and bond yields.

In a market that is underwritten and administered by an inflation-targeting regime the relative stances of the BoE and ECB might mean the path of least resistance for the Pound-to-Euro rate is to the upside even without nascent upbeat sentiment toward the UK economy.

"The roadmap for relaxing restrictions has reinforced our view that the UK will be one of the strongest performers among advanced economies," says Andrew Gooodwin, chief UK economist at Oxford Economics. "Structural characteristics of the economy and the prospect of further fiscal stimulus in next week’s Budget mean that the UK should be one of the strongest performers of the major economies this year. Our most recent forecast is broadly consistent with the roadmap and shows GDP rising by 5.5% in 2021, a performance we expect to be bettered by only the US, Singapore and Spain."

This comes ahead of the budget from Chancellor Rishi Sunak on Wednesday which is the highlight of the domestic calendar. Speculation suggesting a cocktail of fiscal support and possible tax rises will be announced may be politically contentious but isn’t necessarily likely to face objection from markets. 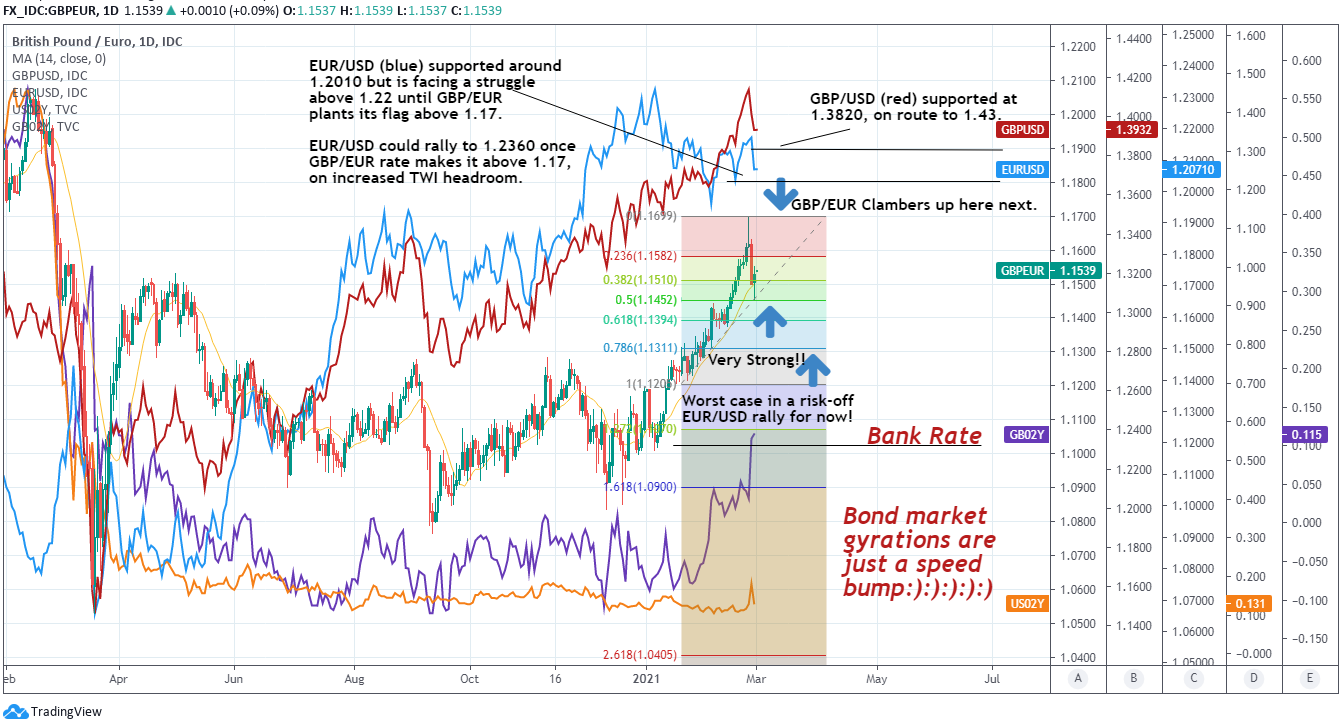 This member of the Pound Sterling Live team has been preoccupied with something since month-end last and has a theory that appears to be absolutely in play, which implies that Sterling and the Pound-to-Euro rate will remain at the vanguard major risk currencies in any renewed expression of the reflation trade, as it’s playing an important role in facilitating a further pending Dollar depreciation by taking hot air out of the trade-weighted Euro.

The idea is that the inflation-targeting 2021 market is compelled to lift GBP/EUR to within a 1.17-to-1.20 range so, through its 15% weighting in the Euro TWI, it creates headroom for EUR/USD to accomodate a further Dollar depreciation without jeopardising the ECB’s inflation target too egregiously for Frankfurt. This necessitates a GBP/USD rise to 1.43 over the weeks if not days.

There is an assumption that Dollar depreciation pressure results from a meaningful shift in a certain foriegn exchange reserve basket which at least downsizes the greenback’s overall slice of cake. Pound Sterling Live was heartened to read in a January note from HSBC  of the Dollar and EUR/USD’s negative correlations with the trajectory of central bank reserve flows.

"There is still little evidence of reserve managers fleeing the USD as the major reserve currency of choice. The EUR is struggling to gain from the USD’s modest demise," writes Dominic Bunning, head of European FX research at HSBC in an early January review of International Monetary Fund (IMF) data for the third-quarter 2020. "While the USD’s share is now down around 1.1ppt in the last four quarters, the EUR’s share is only up by 0.3ppt. This is even after the announcement of the Next Generation EU fund, which was deemed by many as a game changer in terms of the perceived mutualisation of Eurozone sovereign risk. In the last year, the biggest “gains” in share of reserves held does not really come from any of the usual suspects."

The Dollar Index fell in the third-quarter of 2020 while Euro-Dollar rose and both are negatively correlated with the direction of their overall share in central banks’ foreign exchange reserve baskets. This indicates the Dollar grew its share of the basket in the third quarter last year while the Euro saw its slice fall.

HSBC has a bearish view on Sterling for 2021, although since around January 13 and period that came after the above review was carried out, Euro-Dollar  has fallen for the year-to-date and the Dollar Index has risen. The Dollar Index was up 1.12% for the year on Friday and Euro-Dollar was down -1.05%. This is consistent with Pound Sterling Live’s speculative theory. 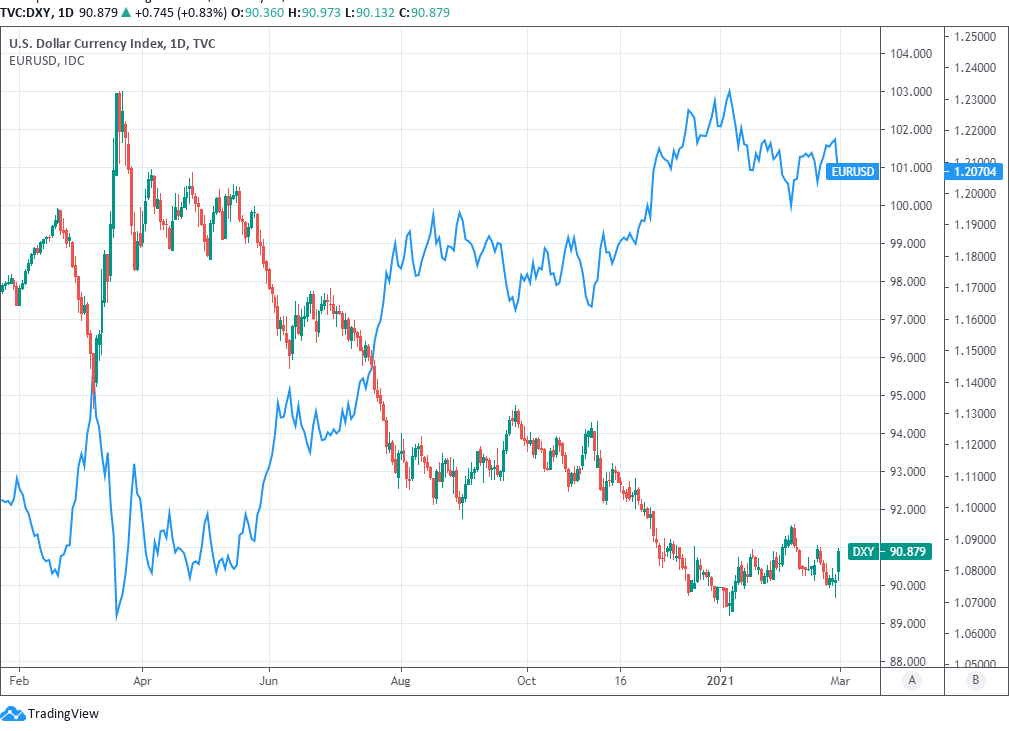 Above: Dollar Index shown at daily intervals alongside EUR/USD (blue).