The Pound-to-Euro exchange rate took the market by storm having risen to nine-month peaks last week but could continue steamrolling higher into month-end, leading to a test of 1.17 in the process, as the UK economic backdrop brightens and Sterling proves popular among central bank reserve managers.

Pound Sterling was the best performing major currency again last week despite already having advanced strongly in February against all nine of its largest counterparts, as the British currency continued to be recognised for its improved economic prospects in light of an almost best-in-class vaccine rollout.

The Pound-to-Euro exchange rate has convincingly reclaimed the 1.15 handle in the process but could be bolstered further as soon as Monday when Prime Minister Boris Johnson is expected to set out before parliament a plan for enabling residents and the economy to exit 'lockdown'.

"While GBP is now trading in a modestly overvalued territory based on our short-term financial fair value model (though still remaining cheap on a medium-term BEER valuation basis), this should now be considered as a new normal as the switch from Brexit-related uncertainty to the vaccine rollout-related upside to the UK growth outlook argues for more frequent periods of GBP valuation overshoots," says Petr Krpata, chief EMEA strategist at ING.

Confirmation of a reopening as soon as quarter-end would put the UK on course for a return to normal months ahead of some European economies, which is supportive of the relative growth outlook as well as the Pound-to-Euro rate.

However, any emphasis on Monday's appearance from Johnson would be to risk overlooking the role played by the Pound in resolving bigger problems beyond Britain's shores. Sterling, in its rise against the Euro, is proving instrumental in facilitating a broader uplift of European currencies by creating headroom in the trade-weighted Euro so that Euro-Dollar's potential to appreciate further is growing by the day. This is necessary for the U.S. Dollar to have scope to extend its depreciation in a meaningful way this year.

"While cable has risen by around 2.5% year to date, the GBP has strengthened by even more against the EUR by around 3.3%. It has helped to lift the GBP close to the post-Brexit referendum highs against an equally-weighted basket of the EUR and USD and extending gains to around 8% since last September’s lows. The GBP is now approaching an important technical juncture," says Lee Hardman, a currency analyst at MUFG. "GBP’s current strong bullish momentum suggests further near-term gains."

Objections from the European Central Bank (ECB) to too rapid an appreciation have acted as a roadblock for EUR/USD of late, and could continue to do so without an extended rally by Sterling. Pound Sterling Live suspects the Pound-Euro rate is on course to establish itself in a 1.17-to-1.20 range imminently so as to enable EUR/USD to rise further and as far as 1.27 in the second and third quarters without lifting the trade-weighted Euro too far for the ECB's liking.

EUR/USD has a 20% weighting in the TWI, although the Pound would create almost one percent worth of headroom in the latter when trading at the top of that 1.17-to-1.20 range, given that Sterling had a 15% weighting in the most concentrated version of the Eurozone TWI as recently as 2018. That means any subsequent EUR/USD rally would be unlikely to upset the ECB in the same way as last year's, and would also facilitate a consensus Dollar depreciation that's widely expected later in 2021. 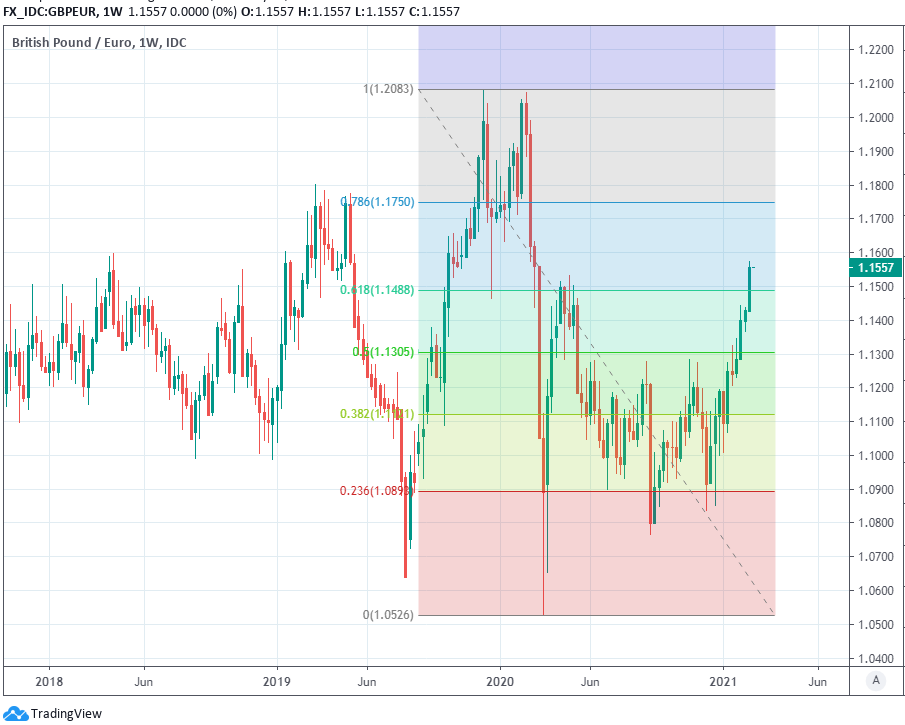 Above: Pound-to-Euro rate at daily intervals with Fibonacci retracements of 2020 fall indicating resistance at 1.1750.

"As portfolio capital flows return to emerging markets and commodity prices continue to firm, further reserve accumulation seems very likely, even as the new US administration steps up surveillance of FX practices among trading partners," says Richard Franulovich, head of FX strategy at Westpac. "A wide range of currencies are likely among the beneficiaries. GBP could see its fair share of renewed reserve manager interest now that hard Brexit risk is in the rear view mirror. China’s Covid resilience and strong recovery could entice flows to CNY. EUR seems ripe for a higher allocation as well."

This, and the idea that Sterling is benefiting from a central bank bid that comes as Asian and emerging market central banks both build as well as diversify their foreign exchange reserves, was the assumption behind last week's forecast for the Pound-to-Euro rate to reclaim 1.15. The Pound entered 2021 with the market looking for it to underperform following the UK's exit from the Brexit transition, but it saw the "strongest real money buying ever" in February.

Earlier bearishness among analysts and investors as well as with the breadth and pace of Sterling's recent gains all suggest that it's among the currencies to be benefiting from a spate of accumulation by FX reserve managers, which has been noted by analysts recently. Reserves have been growing at their fastest pace for seven years as countries seek to slow the pace of the Dollar's depreciation in order to prevent their own currencies rising too fast.

"During the last 5-year period, the GBP has not been a key beneficiary of the steady decline in the USD’s share of global FX reserves. There is scope for this to change, particularly if the USD’s share continues to drop, or if reserve managers reduce their allocations to ultra-low-rate currencies such as the JPY or the EUR," says Stephen Gallo, European head of FX strategy at BMO Capital Markets. "We target an eventual move into the 0.830s [GBP/EUR: 1.20+]." 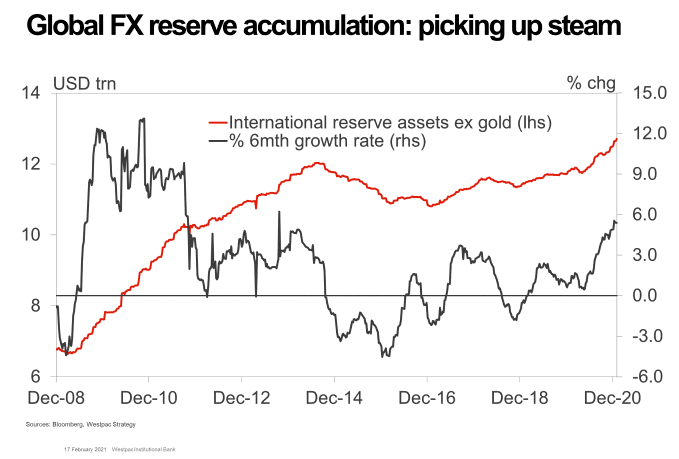 Reserve accumulation involves selling domestic currency in exchange for Dollars, but in an environment where the U.S. Treasury is looking for the market-determined exchange rates, it's less feasible than in the past for reserve managers to keep hold of any newly accumulated Dollars. New reserves need to be recycled for their accumulation to be prevented from inhibiting the Dollar's depreciation, and the Pound is one of the few major currencies that could accommodate such demand.

This is certainly the case if the resulting exchange rate moves are to be prevented from placing in jeopardy a central bank inflation target, given that Sterling is still down against most major rivals over a one-year lookback window and market expectations of UK inflation continue to suggest the Bank of England (BoE) will meet its inflation target in two years. Many other major economy central banks have complained in the last year about the pace of appreciation seen by their currencies.

GBP/EUR would rise above 1.17 this week, even if EUR/USD was to continue its approach of 1.22, if the main Sterling exchange rate GBP/USD succeeds in claiming the 1.43 handle in line with the improved outlooks of many analysts.

"GBP has quickly become a market favourite owing to the UK’s quick pace of inoculations, and we believe that is a fair assessment, but the speed with which Cable has risen to 1.40 may warrant some prudence," says Shaun Osborne, chief FX strategist at Scotiabank. "Attention may eventually turn toward other currencies (the EUR and CAD, for instance) as laggard countries accelerate their vaccination drive. For now, Cable will aim for its April 2018 high of 1.4377." 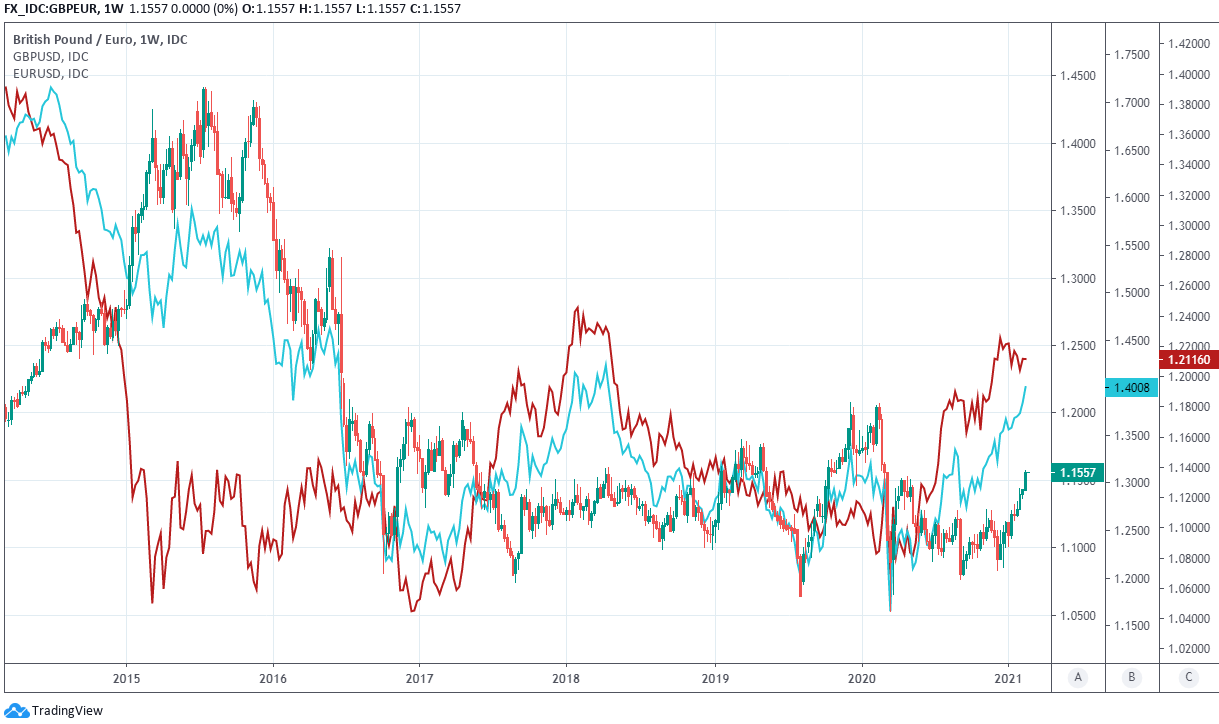 Above: Pound-to-Euro rate at weekly intervals, with GBP/USD (blue) and EUR/USD (red).