The Dollar rose against the Euro, Pound, commodity and other risk currencies after the latter capitulated alongside stock markets at the North American open on Thursday, which subsequently gave way to much crashing and banging in Asian financial markets overnight as traders there departed for the weekend.

Crashing and banging followed a surge in U.S. government bond yields throughout the week, and appeared on Friday to be the price tag for stabilising those yields and latterly, U.S. stock markets that often act as a bellwether for broader financial market sentiment.

"Bond markets and equity futures have regained some poise after yesterday’s rout but G10 FX retains a decidedly “risk off” tone," says Daragh Maher, Americas head of FX strategy at HSBC. "The USD bounce is a reminder that the currency’s interplay with the global reflation theme is not straightforward. History shows the USD typically weakens during global economic upswings, presumably the victim of its safe haven flipside to flows into risk assets. It forms the basis of our USD bearish view."

Bond yields were down on Friday, and most notably the very same U.S. yields that had led the sell-off, while stock market futures were climbing in North America despite widespread losses elsewhere.

Remember everybody has a plan until they get punched in the yield...

"This week’s surge in the real yields of Treasuries is hard to square with the prospects for US monetary policy. One suggestion is that the surge reflects a view that the Fed will have to tighten much more aggressively down the road if it keeps real interest rates very low in the next few years in line with its revised goals for inflation and employment. In apparent support of this hypothesis, the yield curve has steepened," says John Higgins, chief markets economist at Capital Economics. "Yet if this were the reason, why have real yields also risen significantly at the shorter end of the curve, even if by less than those at the longer end? And if investors really are worried that the Fed is going to let inflation run out of control, why have measures of inflation compensation dropped?...the recent surge in real yields [is] hard to fathom." 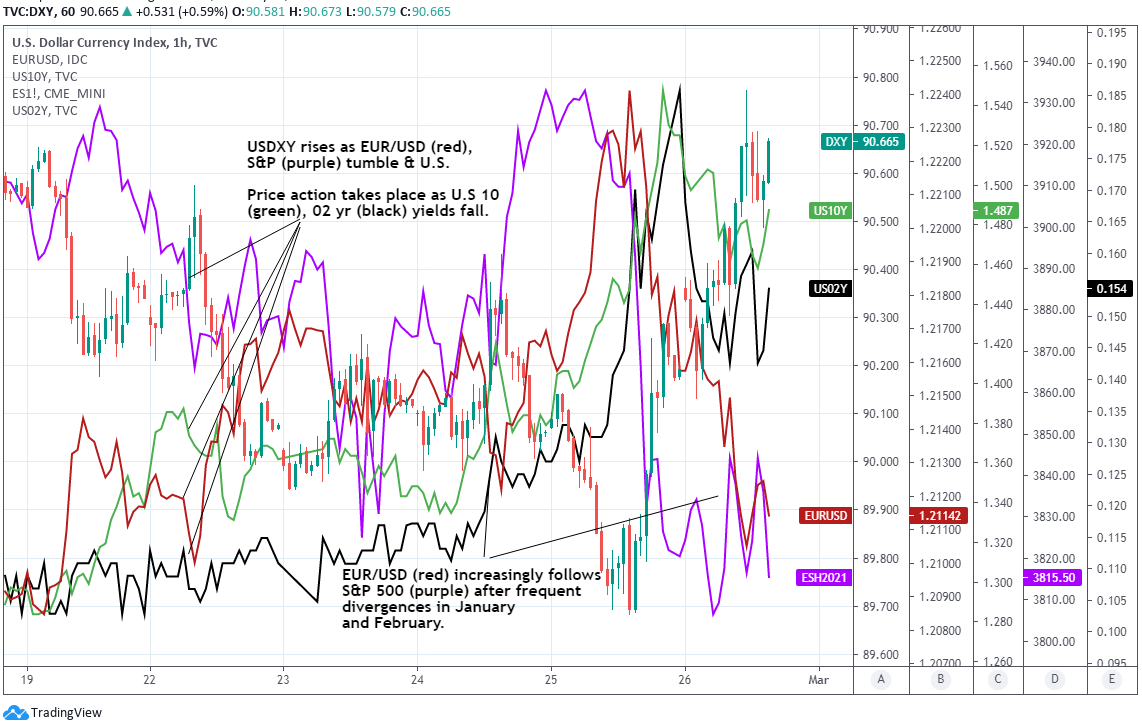 Casual fans would have little choice but to conclude that the final session of the week was one of broad Dollar strength, but beneath the surface, the U.S. Dollar often seemed resistant to any upside correction from a trade-weighted perspective - following earlier increases this week.

The "trade-weighted Dollar" is the U.S. currency measured against a basket of its main trading partners in accordance with their contribution to or share in the overall goods and services trade of the U.S. economy. It's an important measure of the currency's overall performance and a consideration for central banks when judging the outlook for inflation and GDP growth.

The Canadian Dollar has a 13.3% share of the trade-weighted greenback and was resilient until after the North American open on Friday, after which a 0.68% increase in USD/CAD put it on course to end the week with a 0.11% gain.

"After volatility recedes in fixed income, we would expect other asset classes to recover, which should push the USD back down toward its cycle lows. This process may take several sessions to completely trickle through," says Stephen Gallo, European head of FX strategy at BMO Capital Markets. "The stabilizing hand of the PBoC has continued to prevent the RMB from declining more abruptly, notwithstanding the general weakness in risk assets."

The Chinese Yuan has a further 13.7% and strengthened alongside a range of other currencies that would typically be less likely to rise amid so-called risk-off price action. The earlier, brutal sell-off in Asia saw Chinese equity benchmarks like the Shanghai Composite and Hang Seng indices fall almost -2%.

Other risers include the Brazilian Real and Mexican Peso, which together account for around 15% of the trade-weighted U.S. Dollar. This takes some of the economic sting out of the widespread gains in almost all other Dollar rates, by sparing the U.S. export sector from all-round increases.

This is not necessarily a favourable development for the bond market, which many see as concerned about rising inflation of late, although the inflationary impulse coming from declines against major import providers was offset to some extent by other moves elsewhere in the trade-weighted complex.

"TRY has been displaced as the top currency of 2021 (by GBP) as the risk sell-off saw it reverse course. ZAR was hit, but RUB is more resilient which make sense given a 20% rise in oil price this week. The rest of the region saw tiny moves, despite worrying Covid developments in, notable, Czechia," says Kit Juckes, chief FX strategist at Societe Generale. "TWD was the only Asian currency to make headway against the dollar this week and is, indeed, a top 3 currency in 2021, along with GBP and NZD." 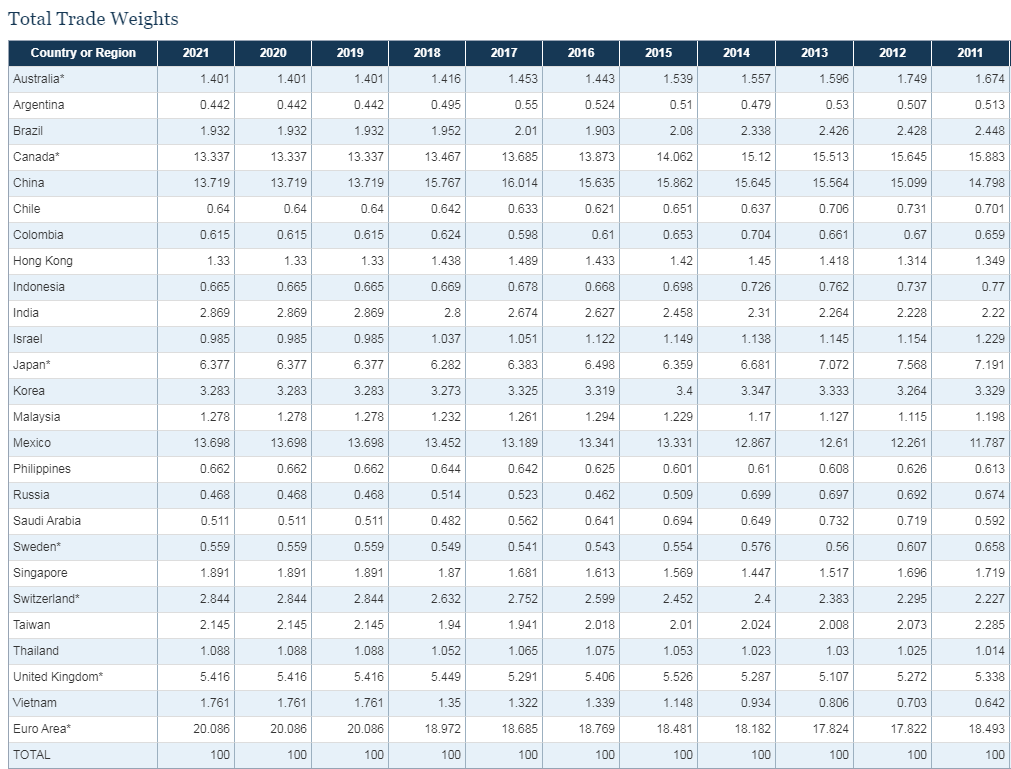 The Polish Zloty was also a relative outperformer with USD/PLN up only 0.32% and to 3.8284 during the Friday session. The Zloty was even more resilient than the Japanese Yen this week, with USD/JPY and USD/PLN up 1.12% and 1.09% respectively for the period on Friday. Similar was true of Hungary's Forint.

Many of Friday's comparative outperformers had underperformed earlier this week, meaning the trade-weighted Dollar did rise overall for the period, although Friday's price action left it appearing less inclined to do that.

The takeaway is if anything that despite widespread gains in many Dollar rates on Friday and for the week overall, they don't necessarily indicate the beginning of any trend toward renewed appreciation.

They could be indicative of an ongoing impetus to depreciate, though much depends on developments in the bond market, which have led analysts and investors to become cautious this week. Especially as, and for the time being at least, the Federal Reserve has washed its hands of any market-perceived obligation to go running after falling knives in the hope of catching them.

"This is what Fed speakers said yesterday with respect to the selloff in the long-end [of the yield curve],” says Bipan Rai, North American head of FX strategy at CIBC Capital Markets. "To summarize the message to markets – “you’re on your own”. Historically, the Fed doesn’t respond until equities are down by around 15%. As such, ‘waiting this out’ might not be the best of strategies for some of our readers that aren’t hedged appropriately." 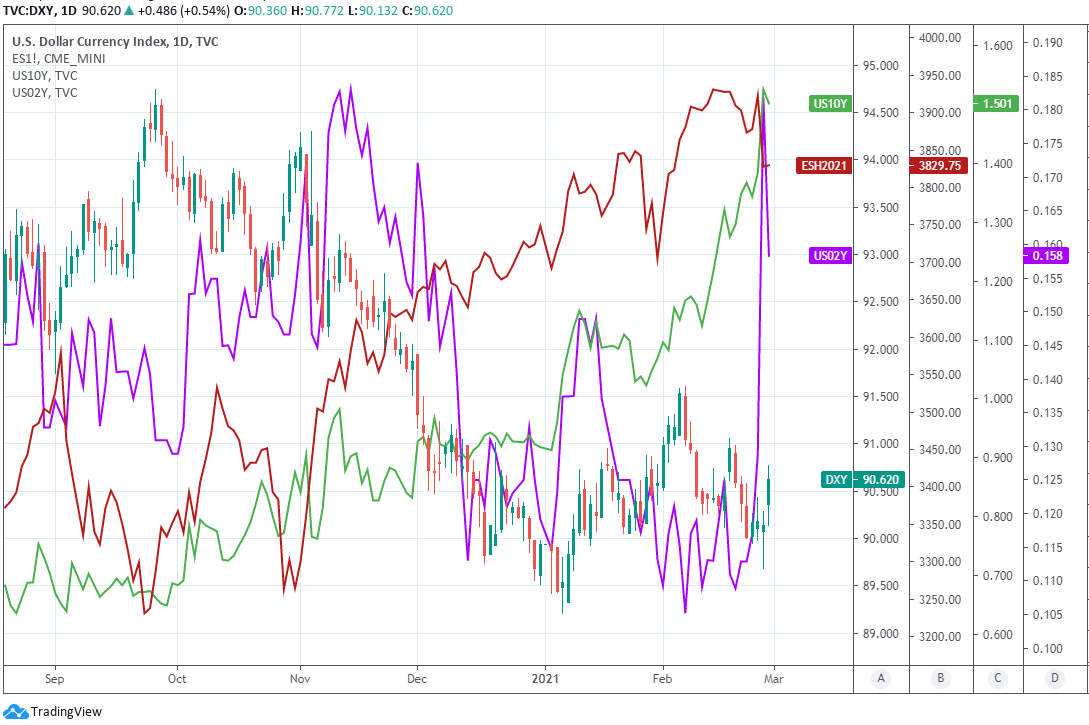