The Canadian Dollar stumbled on Friday as bad weather continued to blight many financial markets ahead of the weekend, leading to sharp gains in USD/CAD that enabled Pound Sterling to catch a previously falling GBP/CAD knife, lifting it back above 1.77 in the process.

Canada's Dollar came undone at the end of an otherwise outstanding week for the oil-linked North American currency, which enjoyed for a time the best of both worlds when Federal Reserve (Fed) officials talked up U.S. economic prospects and oil prices surged by high single digit percentages for the period.

But all that changed when a weeks-long rout in the U.S. government bond market spilled over into the all-important two-year sector of the yield curve, a duration over which the Fed likes to carefully calibrate borrowing costs so as to discharge its monetary policy obligations and meet its inflation target.

Two-year treasury yields began to take off on Wednesday, rising from 0.125% and the midpoint of the 0%-to-0.25% federal funds rate range and threatening on Thursday to test the upper boundary of it when they reached 0.187%.

The move was far larger than that seen in early January, which was the last instance in which bond markets briefly upset the order in stock, commodity and risk currency markets, and it wasn't until these moves appeared to be stemmed on Friday that USD/CAD lost upward momentum.

"Many variables at play here but the bottom line is a significant rise yields and a further pick up in market volatility would not be welcome," says Shaun Osborne, chief FX strategist at Scotiabank. "Nor would a significantly higher USD, in our opinion. Higher real and nominal yields could derail the recovery." 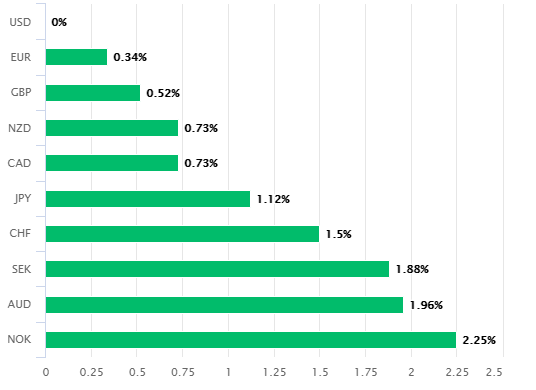 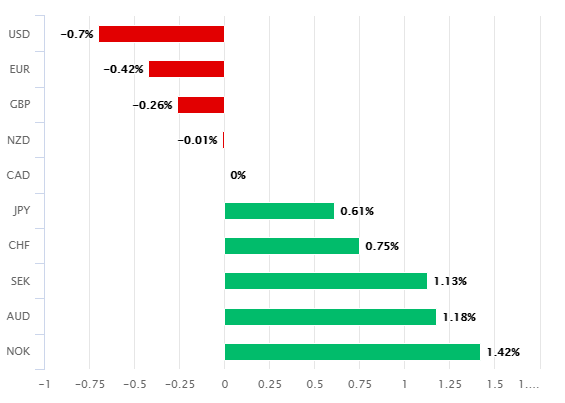 The surge in USD/CAD, which came as GBP/USD slowed in its decline following an earlier sell-off, helped drive a recovery for Sterling that took the Pound-to-Canadian Dollar rate back up above 1.77 by the weekend.

But despite that the European and North American sessions saw bond yields brought under control, global stock markets remained under pressure and key U.S. benchmarks were struggling to sustain their recovery as the proverbial weather remained rough at the close.

"We sent out a bullish note on the CAD yesterday to highlight ongoing downside risks for USDCAD in the coming months. One caveat to the upbeat CAD outlook we highlighted was a pick up in market volatility," Osborne said on Friday. "The CAD retains a defensive tone this morning as commodity prices remain on the back foot and we suspect that yesterday’s market tremors will reverberate around markets for a little longer. This risks driving USDCAD a little higher still in the short run but there is no reason to adjust our longer run views at this point as the underlying fundamental story has not changed."

The Loonie rallied previously and enough to mean that even after a 0.84% surge on Friday, USD/CAD was set to end the week only 0.30% higher. Meanwhile, the Pound's 0.39% increase saw GBP/CAD's gain for the week extending to 0.60%, leaving Sterling third placed in the week's major currency league. 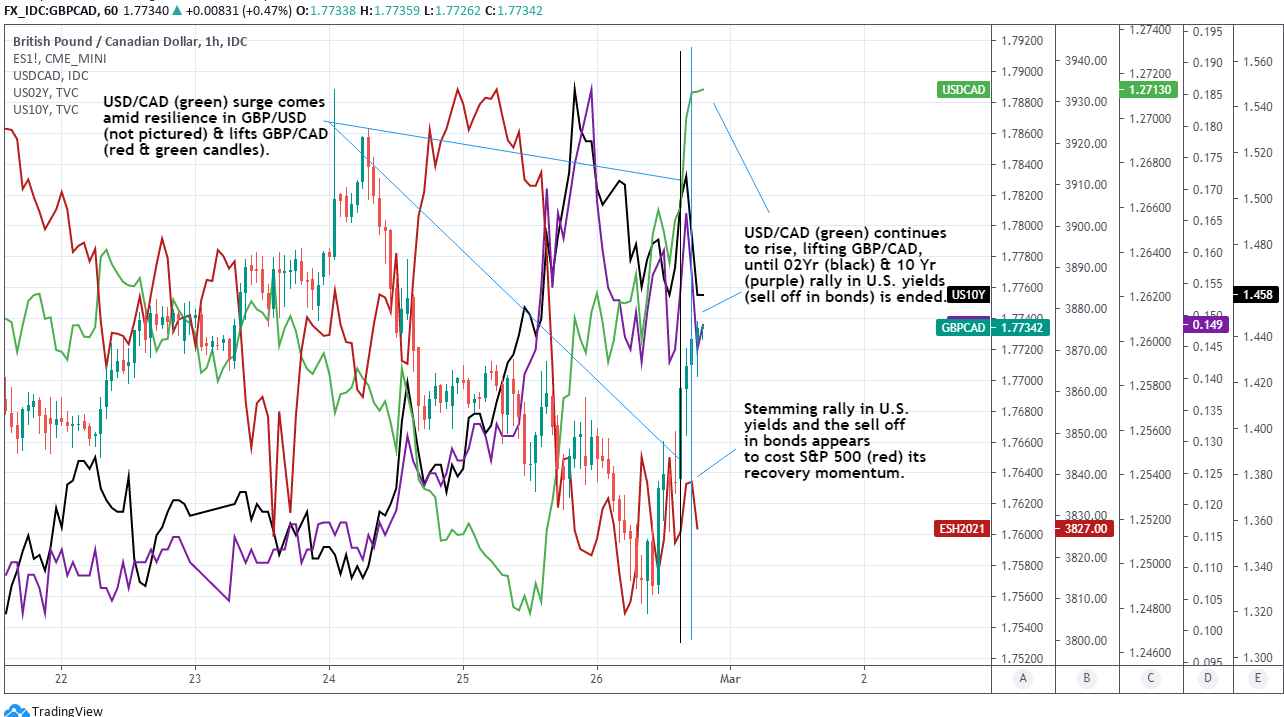 The U.S. Dollar surged Friday as widespread gains lifted most U.S. exchange rates and pushed the ICE Dollar Index sharply higher. This helped the greenback to solidify its grip on the top spot among G10 currencies for the week, although it was followed closely by the Euro and Sterling.

"This week’s surge in the real yields of Treasuries is hard to square with the prospects for US monetary policy. One suggestion is that the surge reflects a view that the Fed will have to tighten much more aggressively down the road if it keeps real interest rates very low in the next few years in line with its revised goals for inflation and employment. In apparent support of this hypothesis, the yield curve has steepened," says John Higgins, chief markets economist at Capital Economics. "Yet if this were the reason, why have real yields also risen significantly at the shorter end of the curve, even if by less than those at the longer end? And if investors really are worried that the Fed is going to let inflation run out of control, why have measures of inflation compensation dropped?...the recent surge in real yields [is] hard to fathom."

Volatility was greater and the moves in bond markets steeper, but this week wasn't the first time its price action has been seen in 2021. Notwithstanding differences in the scale of the moves concerned, a New Year bout of crashing and banging was also facilitated by Fed policymakers and their optimistic take on U.S. economic prospects, which induced financial markets to contemplate the likely timing of an eventual move to taper the bank's $120bn per month quantitative easing (QE) programme.

New Year crashing and banging did eventually resolve in a further and broad weakening of the U.S; Dollar; a major driver of Sterling's 2021 performance.

"The loonie is confirming its better resilience compared to the likes of AUD and NZD when risk sentiment takes a hit, and this should continue to be the case in the next week. The correction in oil prices has also been quite contained, which should continue to provide support," says Francesco Pesole, a strategist at ING. "Data-wise, Canadian GDP numbers for December will be released, giving markets a chance to assess the slump in 4Q20. Still, the impact on CAD should be contained considering the release is quite outdated." 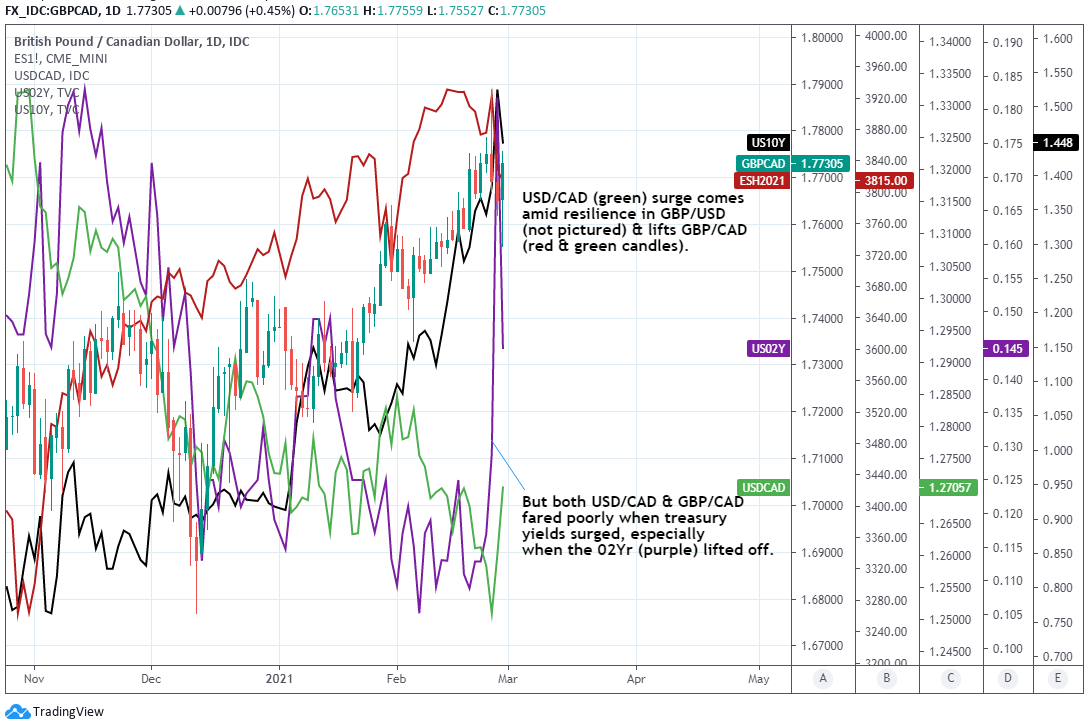