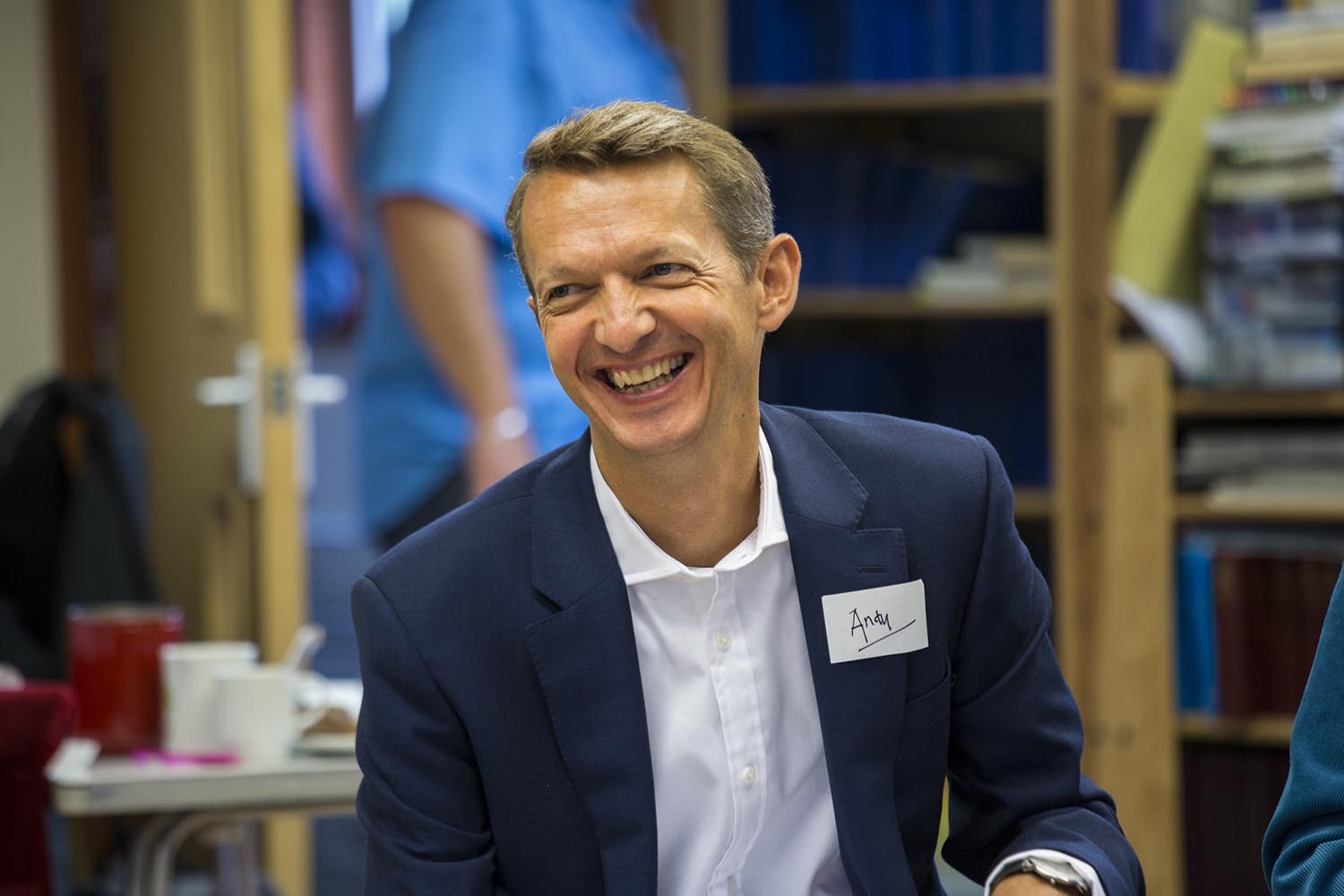 The Bank of England's Chief Economist has said UK inflation is likely to rise notably over coming months, a comment that triggered a rally in the yield on UK government yields and recovery in the value of the British Pound which has come under intense selling pressure over recent hours.

The Pound-to-Euro exchange rate bounced after Andy Haldane said that while there was a degree of uncertainty as to how inflation would proceed in the future, "my judgement is that risks to inflation in the UK are skewed to the upside, rather than balanced."

The move immediately saw investors sell UK government bonds with a ten-year lifespan, which in turn pushed up the yield paid out on those bonds. This is a sign that investors require greater compensation for holding these bonds as they anticipate their value will be eaten away by future inflation.

The rise in UK yields was aided by further comments by Haldane that there is risk of central bank complacency allowing the "inflation cat out of the bag".

"People are right to caution about risks of Central Banks acting too conservatively by tightening prematurely. But, for me, greater risk at present is of Central Bank complacency allowing inflationary (big) cat out of the bag," he said in an online speech for the Bank of England.

A side effect of a rapidly rising bond yield, relative to others, is a bid for the currency that bond is issued in.

Hence, the rise in value of the Pound at around the time of the comments: 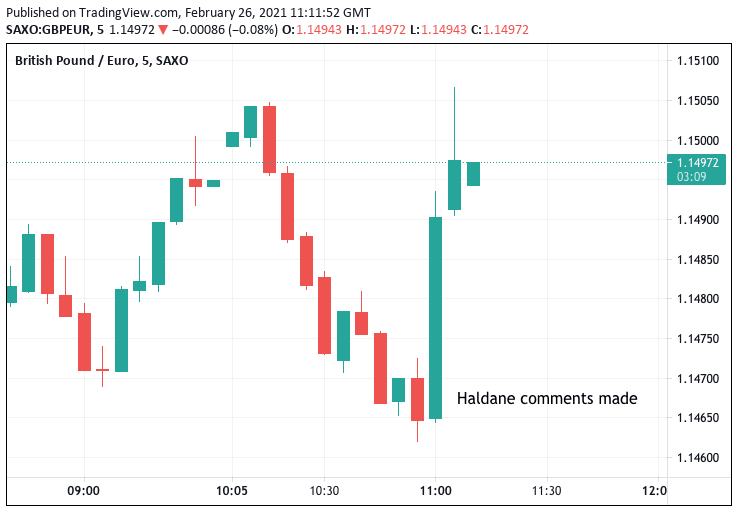 Above: GBP/EUR price action on Friday, Feb. 26 showing a pick up on Haldane's comments

"Inflation is the tiger whose tail central banks control. This tiger has been stirred by the extraordinary events and policy actions of the past 12 months. It is possible that, as vaccinations are rolled out and some degree of normality returns, inflation will return to a stable state of rest. Indeed, if risks from the virus or elsewhere prove more persistent than expected, disinflationary forces could return. But, for me, there is a tangible risk inflation proves more difficult to tame, requiring monetary policymakers to act more assertively than is currently priced into financial markets," says Haldane.

Haldane's comments come at a time of intense investor focus on bond market dynamics that have seen equities fall and bonds sold as investors prepare for a future of higher growth rates, and higher inflation.

Central banks tend to react to higher inflation by raising rates. While higher growth should be good news for markets, we are currently in a world where market valuations have largely been driven by the aggressive balance sheet expansion at the world's central banks which has created the liquidity that has found its way into stocks.

Therefore, any hints that the taps might turn off has hit market valuations.

We note Sterling suffered on a rise in U.S. bond yields over the course of recent hours, however a counter-rise in UK yields might offset some of these losses.

The British Pound rose sharply in early February after the Bank of England sent a signal that it was not considering cutting interest rates again, Haldane's comments suggest investors might need to be on the lookout for a rate rise earlier than they might have initially anticipated.

This bringing forward of rate hike expectations is a classic driver of currency demand, therefore Haldane's intervention keeps a live a bullish thesis for the Pound.

Following the comments the Pound-to-Euro exchange rate trade at 1.1494, having been as low as 1.1453 ahead of Haldane's speech.

Haldane says there is a significant amount of money sitting unused in bank accounts across the country owing to the covid-19 crisis, with households and companies now holding £400 billion of savings.

He says this money "will be seeking a new home, whether physical or financial assets or goods and services. This would provide a very significant degree of additional demand stimulus to an already rapidly-recovering economy."

"To what extent any rise in demand translates into higher inflation depends, ultimately, on the performance of the supply side of the economy," he adds. "Over recent decades supply-side improvements, including increased trade, automation and population, have tended to relax supply-side constraints, dampening inflationary pressures. But some of these global forces now seem set to slow, perhaps even to reverse." 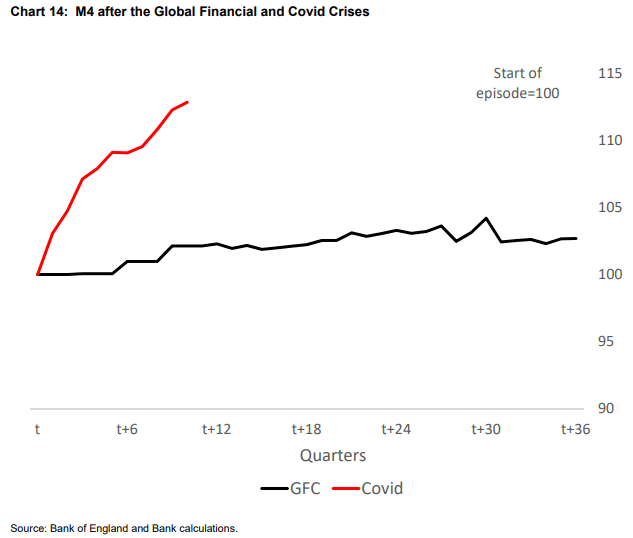 Above: There is a great deal of saved money ready to put to work, more so than was the case in the wake of the previous crisis

Another potential driver of UK inflation in the future is demographic change that will mean there are less workers chasing more jobs, which might well create wage pressures.

"The UK working age population has risen, on average, by over ½% per year over the past two decades. It has also experienced rising rates of labour market participation, in particular among older workers and women. The first, and possibly both, of those factors are now in reverse gear," he says.

"Recent estimates suggest the UK population may have shrunk by as much as 1.3 million people over the past year.17 If these demographic trends continue – a smaller population fewer of whom are in work – this would turn the demographic tailwinds of the past decade into a headwind looking ahead, constraining supply and potentially amplifying inflationary forces," says Haldane.

He says with global trade barriers tending to rise over recent years, and with Covid having provided a further impetus towards localisation, "it seems unlikely globalisation will remain as powerful a disinflationary force in the future". 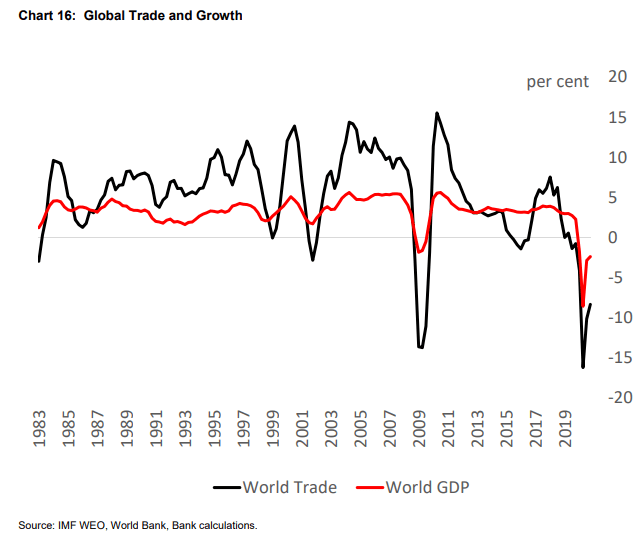 Above: Stalling global trade and rising trade barriers pose a shock to inflation from the supply side

Government fiscal support for the economy has been more generous in the current crisis was the case in the 2008 financial crisis, and given the economy is not expected to suffer the longer-term structural impacts of the previous crisis, the implication for inflation are more sizeable.

"The next 12 months will see a rapid change in measured inflation. In the UK, it is likely to return to its target by the middle of the year, as the one-off effects of Covid wash out of annual inflation rates. Thereafter, the MPC foresees UK inflation remaining around its target level. The risks around this projection are, in the MPC’s judgement, large but balanced," he adds.