The moves suggest Pound Sterling has adopted a 'risk on' status, a description for a financial asset that rises and falls in tandem with the mood of the global investor community.

Deteriorating investor sentiment is on display with global stock markets dropping sharply amidst a rally in global bond yields, with a rise in bond yields in the U.S. being of particular interest.

The yield paid on U.S. ten-year bonds has shot up sharply over the past 24 hours, but so too has the rate on 5 year and 7 year yields. In fact, a poorly subscribed auction for U.S. 7-year bonds on Thursday was cited as sign that a significant market shift is underway. (When investors sell bonds, the yield paid on that bond rises).

"Yesterday proved to be nothing short of a rout in global markets, with the selloff in sovereign bonds accelerating as investors looked forward to the prospect of a strengthening economy over the coming months," says Jim Reid, an economist at Deutsche Bank. 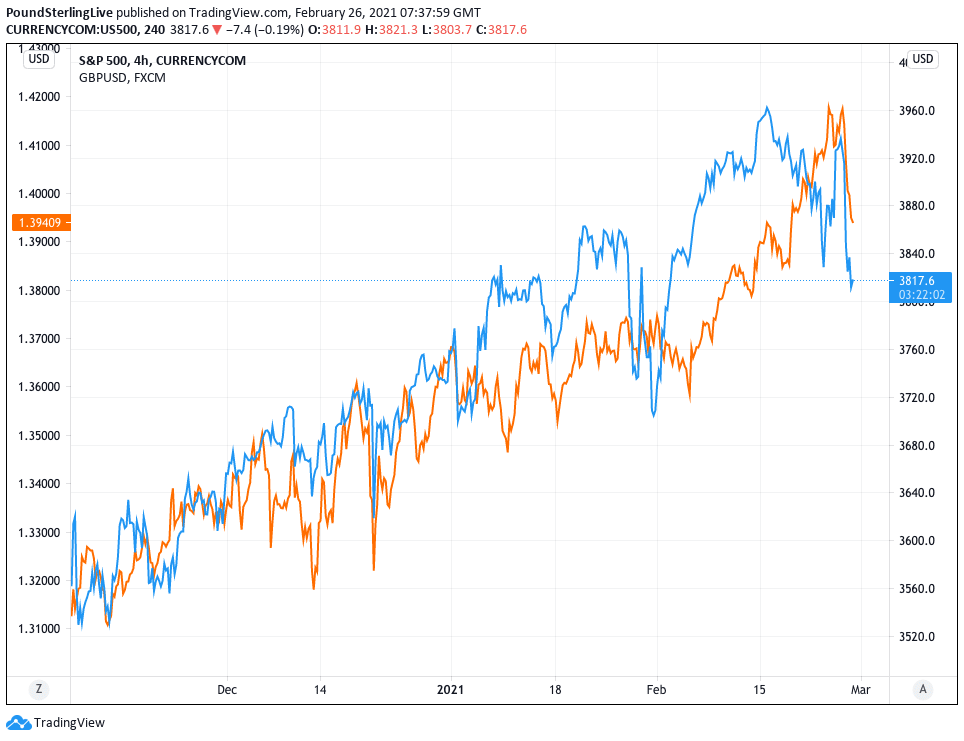 Above: The Pound-Dollar rate (orange) has tracked moves in the U.S. S&P 500 index.

The rising bond yields suggest investors are fearful that inflation will rise sharply over coming months and years as economic growth returns, which would force central banks into exiting their generous quantitative easing programmes and raise interest rates.

It is this central bank stimulus that has pumped global equity markets to current highs and fuelled strong investor returns, a trend that had helped Sterling.

"Matters weren’t helped either by stronger-than-expected economic data, which only added to the fears that the Fed could withdraw stimulus sooner than anticipated," says Reid.

"Yields on 10yr Treasuries rose an astonishing +14.4bps yesterday to 1.520%, bringing them to levels not seen for over a year now, albeit they’ve fallen back -2.6bps this morning. To demonstrate how rare daily moves of this size are, the only times in the last 5 years we’ve seen a rise in yields this large have been at the height of the coronavirus pandemic last March, and the day after President Trump’s election in 2016. So not moves you expect to see every day," he adds.

Sterling has acted like a 'risk on' / 'high beta' currency since Brexit fears faded after the signing of the December EU-UK trade deal: therefore what happens in stock and bond markets matters for the Pound at this juncture.

The current sell-off has not been kind to those betting on further advances in the UK currency: 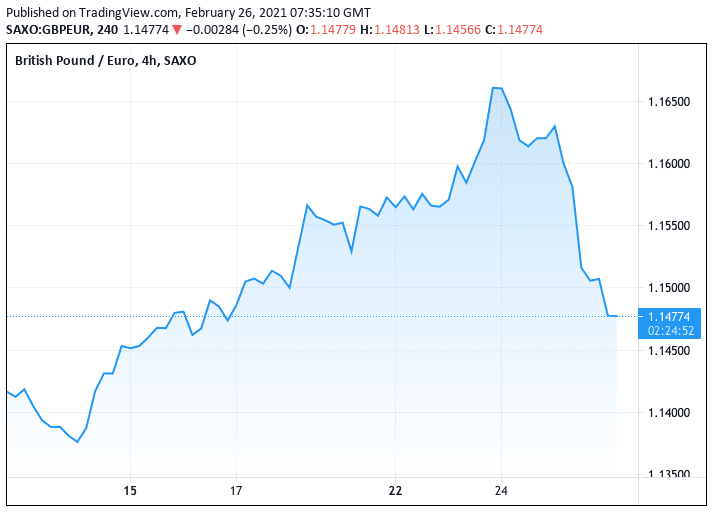 "The safe-haven USD responded as one might expect in a risk-off scenario...strongly higher across the board, with declines in the risk currencies (CAD, AUD & GBP) leading," says Eric Bregar, Head of FX Strategy at Exchange Bank of Canada. "The funders (EUR & JPY) also fell vs USD but outperformed on the crosses." (This explains why the Euro outperformed the Pound).

"The Euro is above GBP on the safe-haven currency ladder," says Robert Howard, a Reuters market analyst.

Sterling's spectacular rally, and then its sudden fall, represents extraordinary volatility for a G10 currency.

"The quid's been on quite a ride this week... and I thought the 'Great British peso' days were behind us," says Michael Brown, Senior Market Analyst at CaxtonFX.

But the declines vindicates a view held amongst some foreign exchange analysts that the Pound had been trading beyond the 'grasp of reality', and we reported on Thursday morning ahead of the rout that the UK currency might have been running too hot and the potential for a correction was brewing.

In a briefing out note this week HSBC analysts cites three factors that make the Pound potentially overvalued:

1) "The UK’s economic recovery remains lacklustre compared to others. The HSBC UK activity surprise index is one of the few trending sideways, not up, showing that the economy is not outperforming expectations in the way the US or Eurozone are."

2) "UK forward rates have risen this year with negative rates being priced out, but the move has been largely in line with what has happened in other G10 rates markets, especially the US. As rate differentials are what should matter for FX, the rate move does not justify GBP’s significant rally."

3) "UK equities remain a laggard suggesting that it is not foreign equities inflows driving GBP outperformance."

The Pound had entered the latter part of the past week looking overbought on some of its crosses, with the Pound-to-Euro exchange rate being a particular case in point.

The overbought conditions were particularly evident in the daily chart, where the Relative Strength Index (RSI) has been screaming overbought for a number of days (RSI in lower panel): 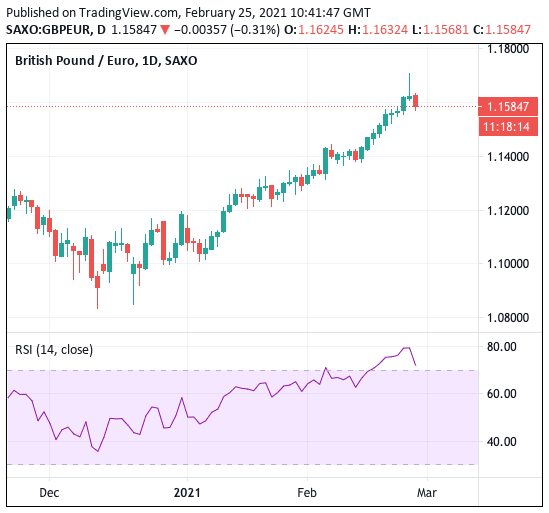 Above: Pound to Euro chart as of Thursday, showing the presence of overbought conditions.

As can be seen in the above, the RSI has moved above 70 which is unusual given the typical state of equilibrium would see it oscillate below here; a reading above 70 signifies GBP/EUR has entered overbought territory.

For the RSI to normalise a period of decline or consolidation in the exchange rate would be required.

How long any decline and/or consolidation lasts could well depend on how long it takes investors to refine their risk-taking appetite.

Despite the equity and bond market-inspired declines, analysts retain a view that Sterling will likely benefit from some fundamental developments going forward.

"GBP continues to stand out in the G10 FX space, with the vaccine dividend making it the outperformer among major currencies. Speculation about the extension of the Covid-19 support/fiscal measures are also GBP positive," says Francesco Pesole, a foreign exchange strategist at ING Bank.