The Dollar was wobbled Tuesday as the Euro and Pound, which account for nearly two thirds of flows measured by the ICE Dollar Index, rose simultaneously and put the broad measure of the greenback into retreat even as stock markets in Europe softened in the wake of Monday's rally.

But both the British and European currencies are vulnerable to a sharp turnaround in the coming weeks as the political news cycle turns against them and if some of the forecasts for the Pound-to-Dollar rate and Euro-to-Dollar rate are anything to go by then the Dollar Index could see a sharp reversal higher that might lead the White House, which has typically been hostile to the strong Dollar, to regret last week's sudden celebration of the currency's strength.

"The UK announced tariff cuts on GBP30bln worth of goods in the supply chain for when it leaves the EU at the end of this year. Around 60% of trade will become tariff free after the plan, relative to 47% currently. GBP/USD rose on the news, but we think this is just short sellers getting stopped out. We are still looking for GBP/USD to weaken below 1.2150," says Bipan Rai, North American head of FX strategy at CIBC Capital Markets. "The risk rally into the week has been driven by news that an experimental vaccine developed by Moderna Inc. shows signs of an immune-system response in early trials." 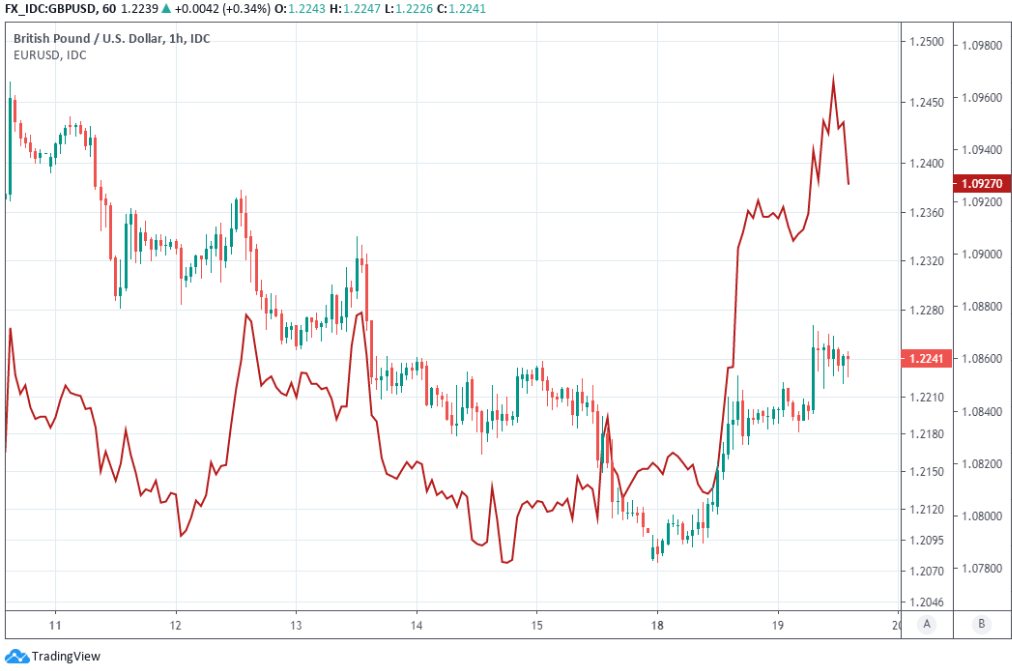 Dollar losses were added to Tuesday by gains for other risk currencies that have celebrated reports of progress in development of a coronavirus vaccine, but an actual vaccine remains a long way from production so it's not clear that it could come soon enough to make a difference to the timetable for reopening the global economy, which is a threat to the positive mood in the markets and an upside risk to the Dollar.

Meanwhile, Sterling and the Euro face a heavy slate of risks heading into June and trade tensions have continued to rise between the U.S. and China since last week's clash, which is a recipe for strength in the Dollar Index if there ever was one. The Dollar Index could see a sharp turn higher if those two European currencies were to turn lower in unison and there's no shortage of reasons for why Sterling and the single currency might come undone in the weeks ahead.

"This proposal isn't a fix of any kind yet. For now, it's just something to shake out euro shorts, against the yen as much as the dollar. We will go on bumping along the bottom of the post-2014 range, and within the post-2008 downtrend, for a while longe," says Kit Juckes, chief FX strategist at Societe Generale. "As for vaccine optimism and bouncing equities, we'll see how long it lasts. Virus experts urge caution, so I'll listen to them. Where infection rates go in the West after lockdown eases is more important than anything else, while equities may be turning already to refocus on trade tensions." 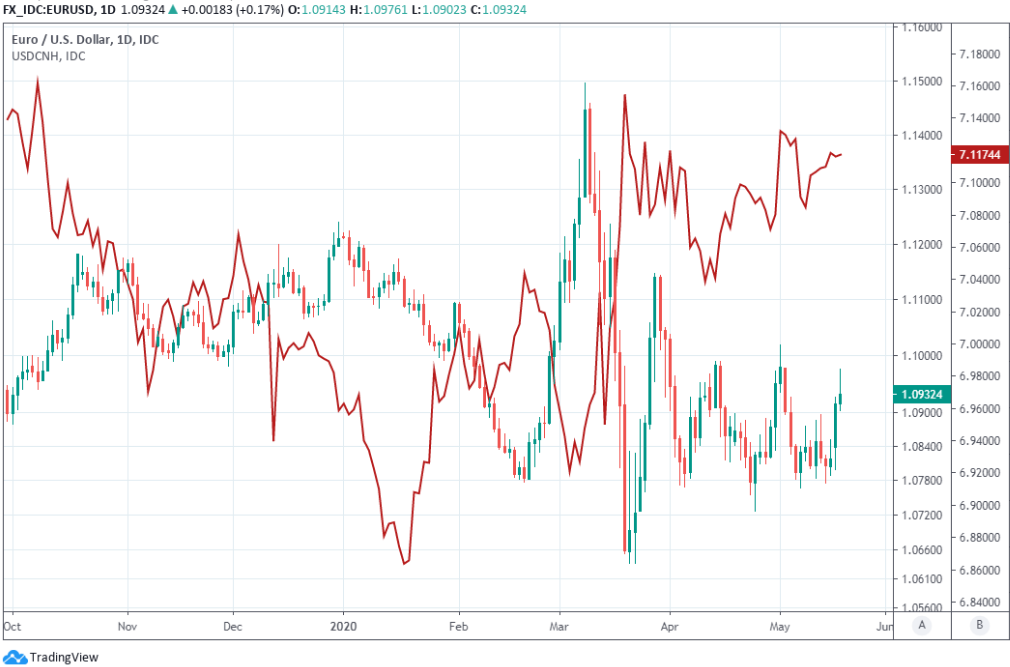 "Our focus has shifted to the 200 day ma and May high at 1.1016/19. A close above here is required to regenerated some upside interest to the 1.1240 December high.," says Karen Jones, head of technical analysis for currencies, commodities and bonds at Commerzbank. "The cross will continue to remain under pressure within its range while it stays below the 200 day moving average and the current May high at 1.1016/19."

Monday's Franco-German agreement has given the Euro-to-Dollar rate an additional tailwind that took it above the 55-day moving-average of prices on Tuesday and put it on course for a collision with its April high around 1.10 as well as the 200-day moving-average at 1.1015. But the pact is vulnerable to opposition from the Northern countries and the politics involved in setting the next seven-year EU budget that will have to be approved simultaneously.

National leaders will take up the issue in June's European Council meeting but some have already objected to some of the details and the French Finance Minister warned on Tuesday that in any case the fund won't be operational before 2021. That's a risk to sentiment and momentum behind the Euro as it approaches a resistance level it might struggle to overcome at the best of times.

"The implications for EUR/USD are not Euphoric yet – details matter, with many unanswered questions (timing of issuance could be a while, perhaps even be next year) with the risks lying towards a more nuanced positive than initial headlines may suggest," says Jordan Rochester, a strategist at Nomura. "We remain short EUR/USD as there remains a pipeline of negative asymmetrical Geo-political risks ahead. But the risks are of a short term pop higher to test the 1.08-1.10 top end of the recent range." 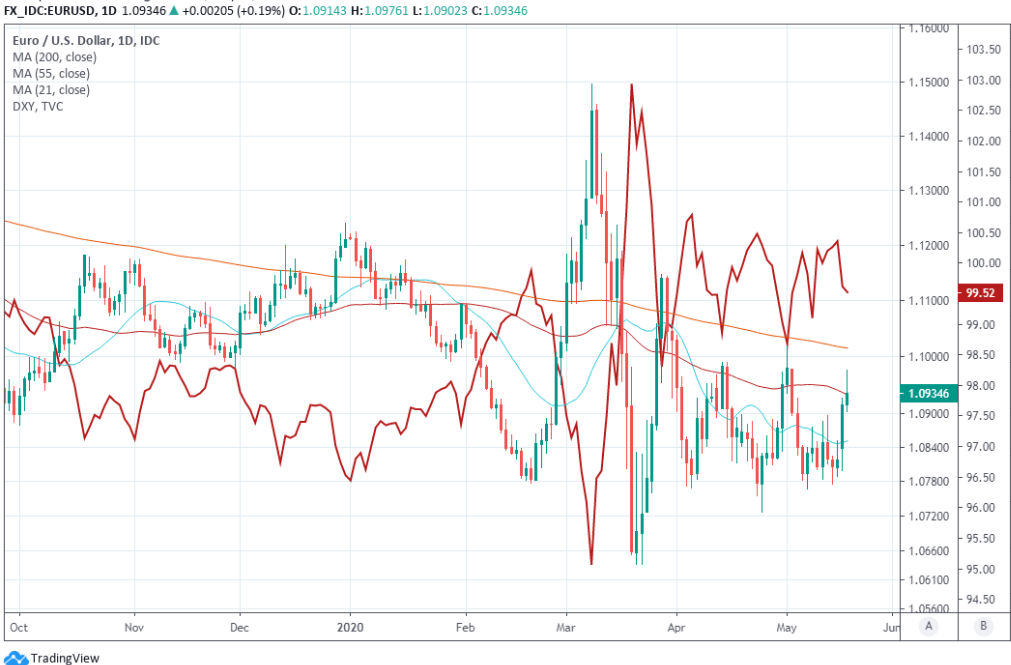 The EUR/USD rate often demonstrates a negative correlation with the USD/CNH that's expected to rise amid any second edition of the trade war, while doubts over the European recovery might weigh on the Euro if they jeopardise recent gains in 'periphery' bond markets.

But much about the outlook for the Dollar depends on the outcome for the Euro given it's lion's share of flows measured by the barometer, and there's a chance that Brexit just might sink the single currency in the instances where EU politics or increasingly acrimonious relations between the U.S. and China don't during the weeks ahead. Anything more than the most marginal loss for the Euro almost always equals a gain for the Dollar Index.

Some forecasters see the Euro-to-Dollar rate dropping to 1.02 by the end of June and if that kind of price action is combined with the heavy losses that are envisaged for the Pound-to-Dollar rate over the coming weeks then the Dollar Index could hit the roof, which make the White House eat the words that said "It's a great time to have a strong dollar."  Bank of England policy could weigh on Sterling up ahead but Brexit is also coming back into the picture and the UK remains on course to be the last major economy to actually exit the lockdown used to contain the coronavirus, which could see it left behind economically by the rest of the developed world.

Only "limited progress" has resulted from Brexit trade talks with just one more round to go before a deadline that will see Prime Minister Boris Johnson choose between requesting an extension of the transition and abandoning talks altogether in favour of renewed preparations for a 'no deal' Brexit after year-end. And with Johnson under fire over his handling of the coronavirus, much like with President Donald Trump and his pre-election tactics for dealing with China, the PM might now feel compelled to take a hardline position with the EU for domestic political reasons. An extension of the transition period, which would be counter to electoral pledges and oft repeated rhetoric, may now be even less palatable as a policy option so the risks are building for the Pound. 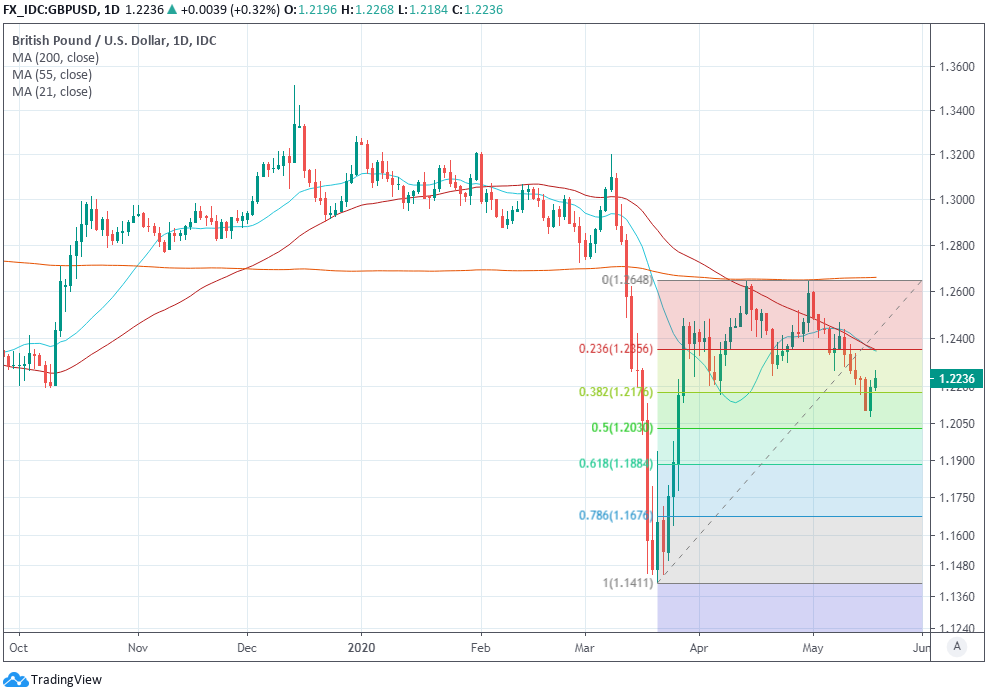 Above:Pound-to-Dollar rate at daily intervals with Fibonacci retracements of March-April rebound marked out.

"Given the scale of the economic crisis that Britain is entering into, it may be wise for investors to keep an open mind as to monetary policy developments over the next year or so in the UK and beyond. The fact that the money market continues to price in a dip into negative rates suggests they are doing just that. This factor combined with Brexit risks and criticism of the government on its handling of the Covid-19 crisis suggest the potential for further pressure on the pound. We see downside risk to our longstanding target of GBP/USD1.19,"  warns Jane Foley, a senior FX strategist at Rabobank.

Brexit 'cliff edge' risks and other factors are expected to weigh heavily on Sterling in the weeks ahead, potentially taking it beneath 1.05 against the Dollar and without an accompanying devaluation in the Euro this price action would take the GBP/EUR rate below parity and in the process, impose an 18% de facto 2020 tariff on imports from the Eurozone into the UK, one of the bloc's top export markets, at a time when demand the bloc is in ailing health and many of its other markets like China are under pressure.

A Euro-to-Dollar rate of 1.02 and a Pound-to-Dollar rate of 1.05 will see the Dollar Index hit the roof without, substantial downside in USD/JPY and USD/CHF, and even if Sterling's eventual losses aren't quite that large the barometer could still advance on earlier highs if the European currencies do come undone.

"We'll stick with EUR/JPY shorts unless we break 120, and enjoy the risk bunce through AUD/CAD and AUD/GBP. If EUR/JPY does break 120, while the UK continues to rule out any extension to Brexit negotiations, I'll be sorely tempted just to double down with fresh GBP/JPY shorts," Juckes says. 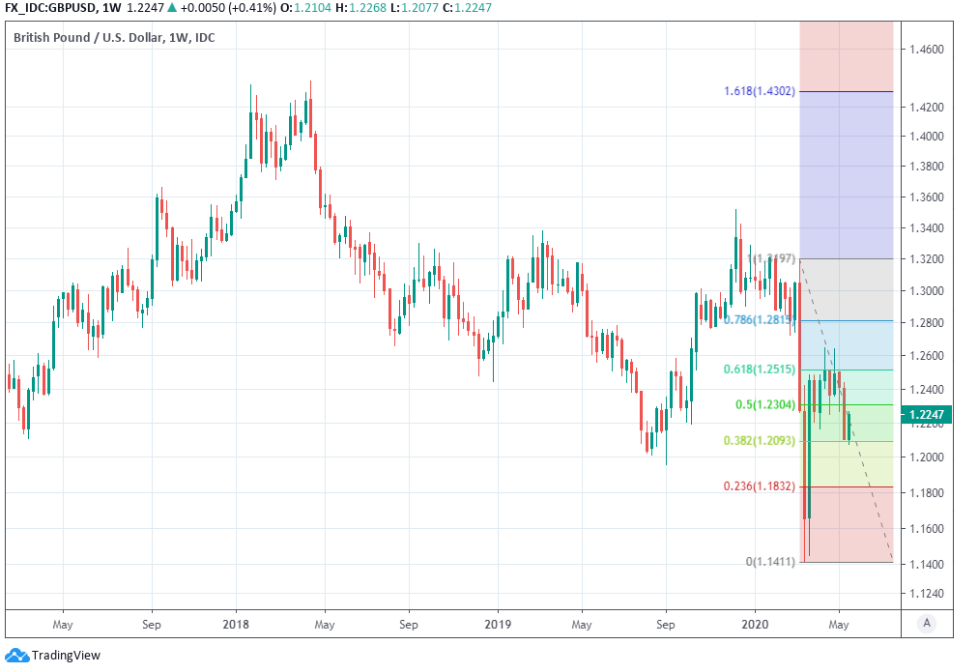 Above:Pound-to-Dollar rate at weekly intervals with Fibonacci retracements of 2020 downtrend marked out.