- As ECB QE policy at risk from constitutional lawfare in Germany.

The Euro was in retreat Wednesday and despite earlier downgrades to expectations, the market consensus was again under threat from political risk, although this time coming from Karlsruhe and Frankfurt and involving a spat that could sabotage the European Central Bank (ECB) crisis response.

Europe's single currency slipped back to the 1.08 handle Wednesday after falling from 1.10 at the open of the week, taking it further away from the 1.12 market consensus for mid-year and the envisaged 1.14 endpoint, taking the market a step closer to favouring the more bearish forecasts on the map that warn of a dip to 1.02 by the end of June. Such is the lay of the land for a Euro-to-Dollar rate that had previously been tipped to hit 1.15 by year-end.

The Euro was still reeling from Tuesday's ruling by The Federal Constitutional Court in Karlsruhe that the ECB "neither assessed nor substantiated that the measures provided for in these decisions satisfy the principle of proportionality," when launching its first quantitative easing programme in 2015. The ECB responded Tuesday by citing an earlier European Court of Justice ruling that Germany's constitutional court had already all-but tore up as a defence.

"Two of Europe's top courts arguing about the legality of bond-buying in the middle of a pandemic inject uncertainty into a market that doesn't need it and does nothing to boost confidence. The euro's chance of breaking back above its 200-day average at USD1.1030 any time soon seem even more remote," says Kit Juckes, chief FX strategist at Societe Generale. "EUR/USD is likely to b stuck in a low range for now, anchoring GBP/USD with it and testing the SNB's resolve to hold EUR/CHF in the process. EUR/JPY remains a sell too." 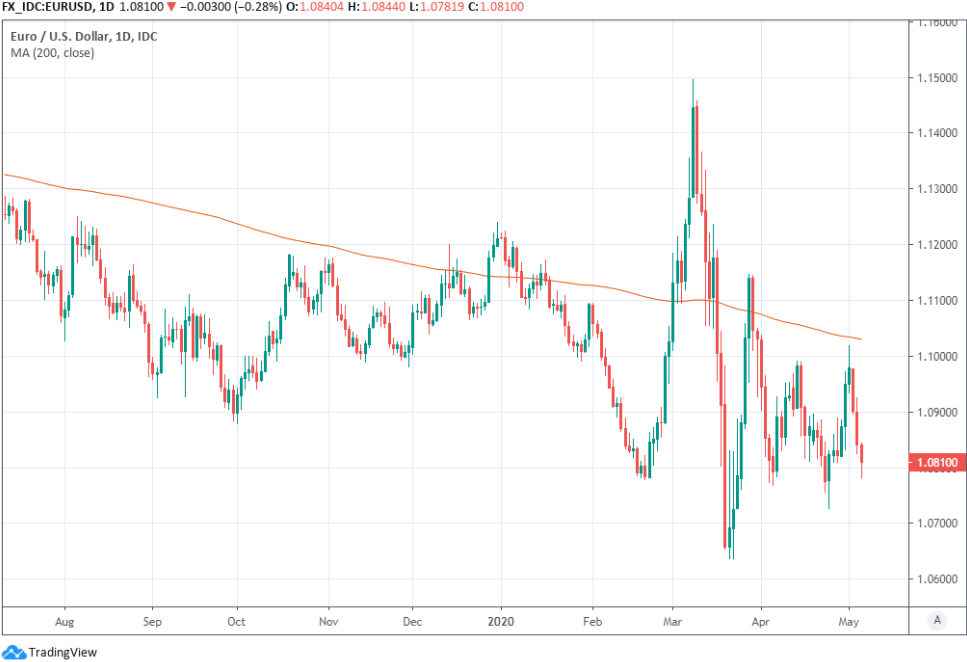 The Federal Constitutional Court has given the Bundesbank a viable road to withdrawing its participation in the ECB's QE if the Frankfurt-based institution cannot demonstrate within three months that it assessed and found its own actions to be proportionate at the time. A shift in the burden of proof from prosecutor to a prosecuted European Central Bank that must now prove its innocence before one of the single currency bloc's most influential courts.

"While the intra-day price action after German ruling was negative but not disastrous, the longer term message it sends underlines our original concerns which formed the key aspect of our bearish EUR view: impactful political disunity in the midst of a major social and economic crisis. We retain our EURUSD 1.07, EURJPY 112 and EURCHF 1.0250 targets respectively," says Shahab Jalinoos, head of FX strategy at Credit Suisse.

Any inability to overcome this burden would risk seeing the bank's most meaningful monetary policy leaver neutred and its coronavirus crisis response sabotaged. Societe Generale's Juckes says it would be like "shooting the EU in the foot." It certainly would risk bringing about, in a roundabout way, something like a half-in and half-out style of Eurozone exit for Germany and the country has long been the largest underwriter of the single currency.

"The ECB has three months to answer...and convince. If it fails, it will be a problem, not only for the PSPP, but also for the PEPP (Pandemic Emergency Purchase Programme) and for the eurozone,"  says Florence Pisani, head of economic research at Candriam. "Finally, this may raise a fundamental problem between national versus European law, which goes far beyond monetary policy and has consequences for the EU. Some countries (Poland, Hungary) could rush into the breach. If the German Court can say that the European Court of Justice has exceeded its rights, why shouldn't their own Courts be able to do the same? In short, this is pretty bad news for Europe!" 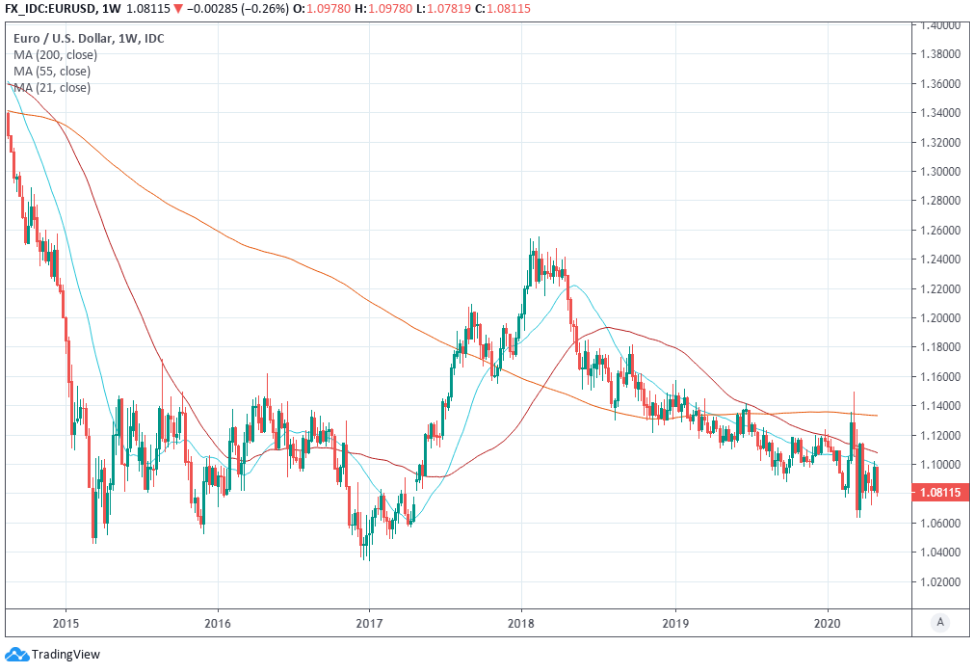 Above: Euro-to-Dollar rate shown at weekly intervals alongside selected moving-averages.

"Though EURUSD is undervalued by about 10%, according to our estimates, we see it weakening further in the rest of the year. We forecast EURUSD at 1.02-1.05, with risks to the downside. EURUSD is down 3.4% this year, but has fluctuated between 1.069 and 1.145," says Athanasios Vamvakidis, head of FX strategy at BofA Global Research.

The ECB's oft-controversial quantitative easing programme is under threat at a time when the bank's related interventions in the bond market are proving crucial to preventing an unsustainable increase in 'periphery' economy bond yields. The bank has also again proven itself to be the only bloc-wide crutch the fiscally challenged and fragile South can lean on in hard times.

This week's spat came as Italy and Spain took their first tentative steps out of 'lockdown,' joining a growing number of other countries on the continent although without any sign of the promised European 'recovery fund' that will now only be agreed alongside the next multi-annual EU budget and which could take months more to bring online. It follows closely behind some of worst growth figures seen by economies in living memory and amid signs that fresh U.S.-China tensions could be in the pipeline.

"We would be wrong and EURUSD would strengthen if a cure or vaccine for COVID-19 were to be found soon, as the global outlook would improve substantially, or if the Europeans were to mutualize a substantial part of the increase in the government debt-through a Eurobond/Corona bond-but this seems unlikely," Vamvakidis adds. 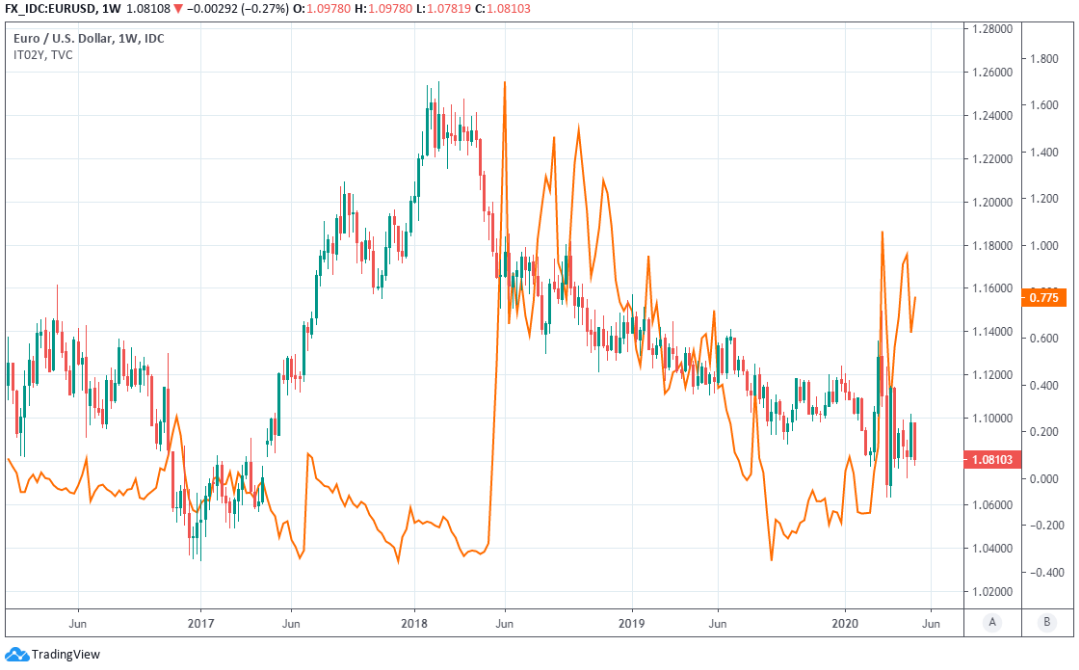 "Reports suggest that Washington will issue a whopping $4.5T in new debt, about 20% of GDP, which has rekindled calls for a bear market in the dollar. That’s amusing to us. A sustained sell-off in the greenback requires a rally in the euro, which begs the question: what exactly are dollar bears assuming in terms of fiscal policy in the Eurozone?," says Claus Vistesen, chief Eurozone economist at Pantheon Macroeconomics.

Eurozone leaders are yet to agree the shape and financing terms for a 'recovery fund' that's supposed to aid weaker economies to exit the crisis and have so-far agreed only a limited pan-European aid package, which has left the onus on already highly indebted member states to borrow large, in some cases double-digit percentages of GDP from the markets in order to fund the coroanvirus containment effort. The recovery fund ball was at the feet of the European Commission Wednesday.

However, even in a best case scenario the fund is unlikely to become operational for months and so leaves the fiscal response in Europe as a fragmented, often-limited and generally inadequate affair that risks condemning the continent to further economic underperformance once the coronavirus is finally under control. This could ensure that the transatlantic growth differential, which is often a significant influence on the Euro, remains a burden for the single currency for some time yet.

"It’s very difficult to make a case for a sharp move in EURUSD based on any of the headline macro data at the moment. Our intuition is that markets overestimate the risk to the dollar from the fiscal costs of the Covid-19 crisis, at least relatively to the Eurozone, where governments face a bill that is at least as big, if not bigger, as a share of GDP. In both cases, however, central bank support and stimulus programs will be key, and both institutions currently are stepping up," says Pantheon's Vistesen.