The Pound-to-Dollar rate beat a hasty retreat on Friday that's left it teetering on the edge of a precipice after suffering decisive losses on the summit of its March-April rebound, and Friday evening's close could be key to exactly how quickly it unravels back in the direction of earlier lows.

Sterling was left reeling by Friday's update from Brexit negotiators after this week's talks achieved little more than confirmation of another deadlock between London and Brussels as the two sides seek to secure their most prized objectives in the trade talks before tidying up the details at a later date.

"The major obstacle to this is the EU's insistence on including a set of novel and unbalanced proposals on the so-called 'level playing field' which would bind this country to EU law or standards, or determine our domestic legal regimes, in a way that is unprecedented in Free Trade Agreements and not envisaged in the Political Declaration. As soon as the EU recognises that we will not conclude an agreement on that basis, we will be able to make progress," says David Frost, the UK's lead negotiator. Michel Barnier's remarks can be found in full here.

If EU so worried about level playing field then UK says it has floated possibility of aiming for 98% or 99% tariff free quota free trade (like Canada/Japan) if 100% too difficult. BUT EU says not enough time to negotiate individual tariff lines by Johnson end of year deadline /3

The EU has bid immediately for an extension of the transition period, a 'level playing field' that would preserve much influence and control in various policy areas and a status quo settlement on the subject of fishing rights, where the bloc with its 27 mostly-landlocked members is at a disadvantage. Meanwhile, London's negotiators have pursued a typical free trade agreement that they say should be negotiated as 'sovereign equals'. The two opening gambits are clearly incompatible and have produced a deadlock. 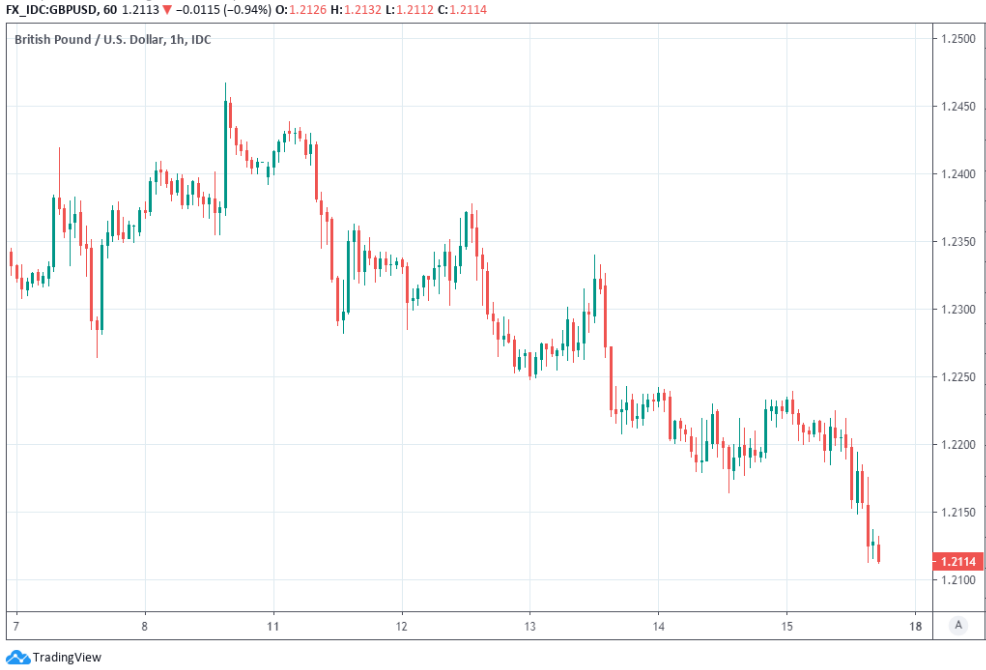 Pound Sterling doubled the size of its intraday losses against the Dollar, Euro and other major currencies in the price action that followed Friday's statements, pushing the Pound-to-Dollar rate's loss for this week near to the -2% threshold while leaving the British currency dangling over the edge of a precipice.

Jones and her technical analyst colleague Axel Rudolph are sellers of the Pound-Dollar rate from 1.24 and are targeting 1.21 and 1.1850 short-term, although they also look for a retest of the March lows at 1.1409 ahead of a possible fall to a fresh multidecade low at 1.0463 in the next three months or so. That latter target is just less than 14% below Friday's market price and so implies substantial downside for the exchange rate in the short term.

The Pound-to-Dollar rate fell beneath the all-important April low of 1.2163 on Friday and if the market closes below there this weekend then it would put the 50% Fibonacci retracement of the March rebound, located around 1.2030, in the pipeline ahead of even further losses over subsequent days and weeks. 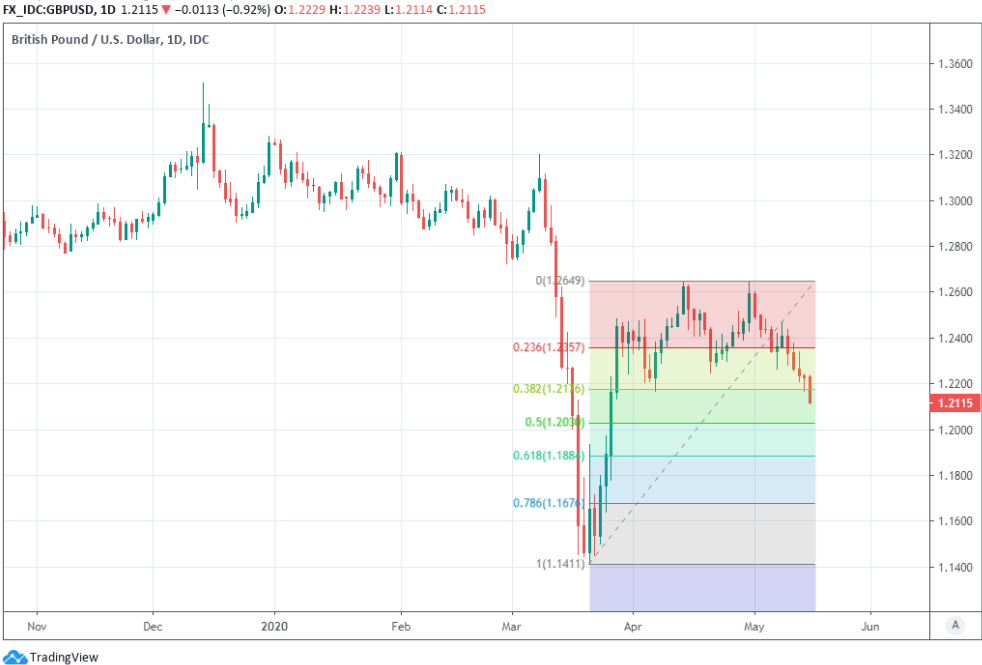 Above: Pound-to-Dollar rate at daily intervals with Fibonacci retracements of March-April rebound.

The above bearish price action would be playing out as the end-June European Council deadline for organising an extension of the Brexit transition period draws closer, bringing another cliff edge into view.

There's a further rub though, in that such rates would only be available to institutions, with rates for SME and retail customers much lower. Specialist payments firms can help squash the spread between interbank and retail rates.

"Our base case is currently that a finite amount of "expendable energy" in both London and Brussels for a long period of frustrating negotiations is boosting the implied odds of a move to WTO trading rules (in some form) by year-end. We suspect that some would still happily take the other side of this trade, but the very latest price action in GBPUSD suggests that number is steadily dropping," says Stephen Gallo, European head of FX strategy at BMO Capital Markets.

The official deadline for agreeing future preferential trade relations or defaulting to a relationship governed by World Trade Organization terms is December 31, although arguably the real one is currently June 30 because Prime Minister Boris Johnson has previously said "the Government will need to decide whether the UK’s attention should move away from negotiations and focus solely on continuing domestic preparations to exit the transition period in an orderly fashion," should the substantial body of a deal not be in shape before then. David Frost said Friday; "We very much need a change in EU approach for the next Round beginning on 1 June. In order to facilitate those discussions, we intend to make public all the UK draft legal texts during next week so that the EU's member states and interested observers can see our approach in detail."

June is also the deadline for extending the transition. Absent a request for an extension, which the government says it won't make, the market could begin to fret about something like a 'no deal' Brexit again and the last time it did that the Pound-to-Dollar rate fell below 1.20. This level has already been broken once amid the bearish price action of 2020 and is now key to whether the British currency sets new multi-decade lows like it did back in March. 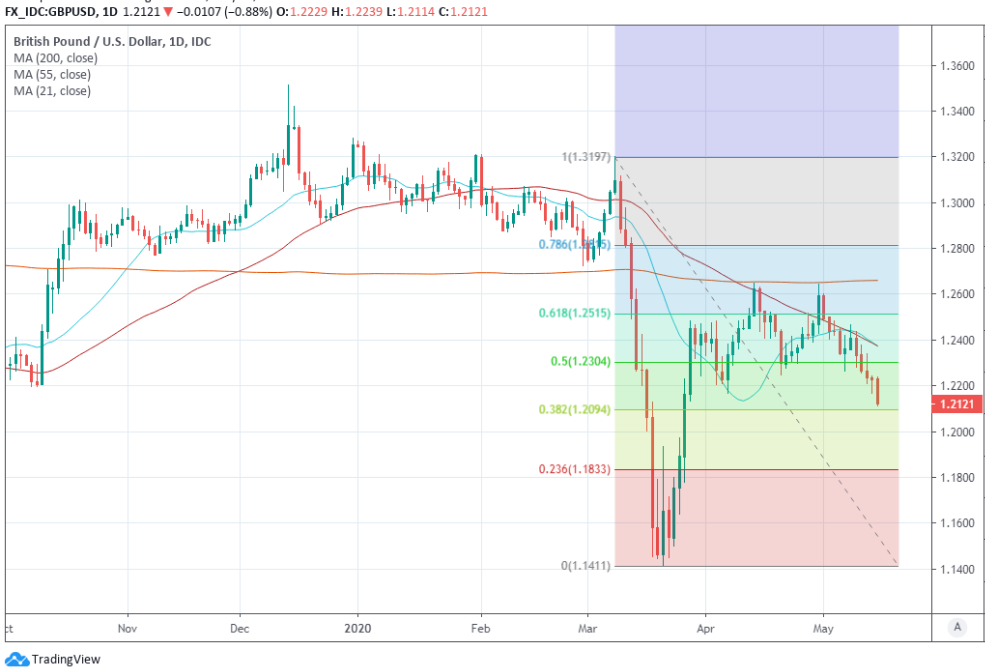 Above: Pound-to-Dollar rate at daily intervals. Decisive losses on the summit of the March-to-April rebound.

"G10 FX performance this week is reminiscent of performance during the risk off period in March as the hit from COVID-19 became apparent," says Derek Halpenny, head of research, global markets EMEA and international securities at MUFG. "Trump’s escalation of tension with China could worsen over the short-term while equity markets continue to look richly priced given the potential hiccups as economies roll back lockdown restrictions from here."

Pound Sterling's path lower had already been greased on Friday by rising temperatures between Washington and Beijing as the trade ceasefire between the U.S. and China appeared to fall apart, with the world's two largest economies exchanging fire over familiar as well as more novel complaints. But the prospect of the two sides coming to blows is an additional risk for a Pound-to-Dollar rate that's positively correlated with the S&P 500 stock index.

U.S. lawmakers advanced a bill in the Senate Friday that will sanction China over alleged human rights abuses in Xinxiang province, while House of Representatives lawmakers contemplated another bill that provides President Donald Trump the authority to impose sanctions on China if the government does not cooperate with an international probe into the origins of the coronavirus that's closed down vast parts of the global economy.

This was after the U.S. renewed its campaign to keep American technology out of Huawei hands, drawing angry rebukes from Chinese government controlled media. The editor of China's Global Times newspaper, which is widely perceived as an unofficial English language loudspeaker for Beijing, said China will retaliate against the measures using its 'unreliable entity' list.

"Tensions between the US and China are flaring up again, with President Trump threatening to ‘cut off the whole relationship’. Brexit negations are struggling, to say the least, and the German court ruling on the ECB’s quantitative easing program reveals how political pressures are building in other areas, as well. This comes at a time when equity markets seem to be consolidating in the wake of a massive stimulus-driven rally," says Jeroen Blokland, a portfolio manager at Robeco, a buy-side fund house with €171bn (£151bn) under management in 2019. "With the global economy still struggling to recover and forward earnings looking lofty, this increases the risk of a renewed downturn in equities – something I believe should be taken into account for multi-asset portfolio." 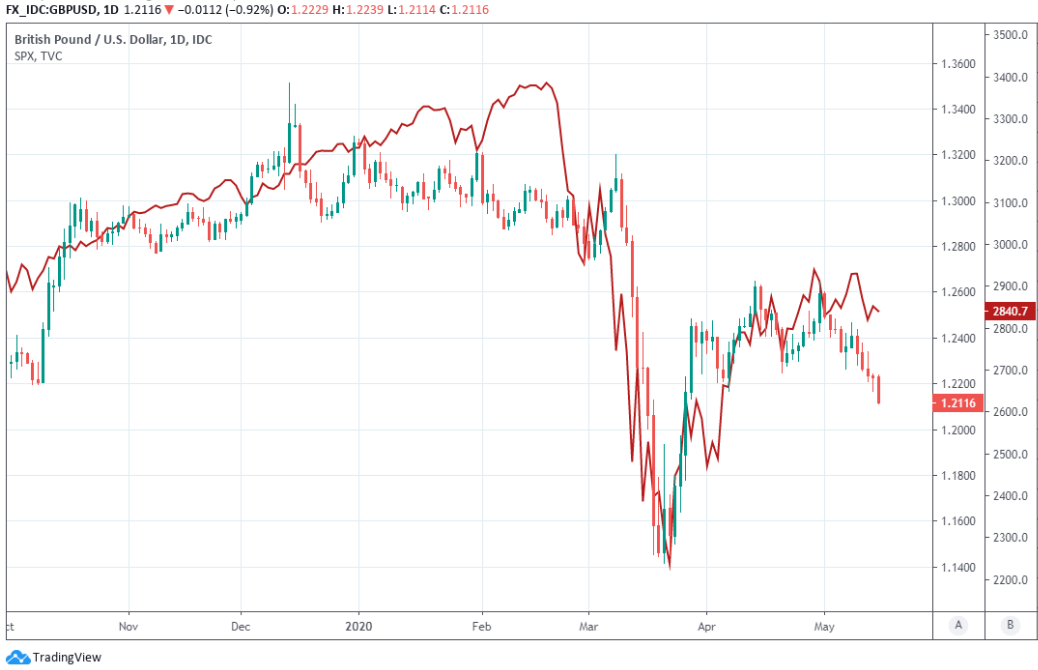 Above: Pound-to-Dollar rate at daily intervals alongside S&P 500 stock index, as both turn lower.