The British Pound extended losses against the Euro, Dollar and other major currencies ahead of the weekend following confirmation that the EU and UK are at a deadlock in trade negotiations.

Following the latest round of talks, the UK's chief negotiator David Frost said the EU were making "novel and unbalanced proposals on the so-called level playing field," adding that the list of demands were without precedent in previous EU trade deals.

The Pound-to-Euro exchange rate fell by over a percent to its lowest level since April 01 at 1.1245 on the developments, as markets raised expectations that negotiators would not reach agreement ahead of a crucial June 30 deadline.

"Make that a seven-week low for Sterling. Growing doubts over the U.K. and EU reaching a trade deal in the months ahead gnawed anew at the pound. Mostly risk off global markets and the Bank of England not ruling out negative borrowing rates added traction to the pound’s turn to the bottom of its range," says Joe Manimbo, a foreign exchange analyst at Western Union.

Frost thanked his EU counterpart Michel Barnier and their respective teams for the determination shown to work through differences, despite the difficult circumstances posed by the coronavirus crisis.

"I regret however that we made very little progress towards agreement on the most difficult outstanding issues between us," said Frost.

There remains just one further round of negotiations before a June 30 deadline by which the UK must request an extension to the negotiating period, or the EU and UK risk defaulting to a WTO trading relationship at the turn of the year.

Foreign exchange analysts say this outcome would be negative for Sterling as the UK would lose direct access to the single EU market and the country will be deemed to be a less desirable destination for foreign investors. 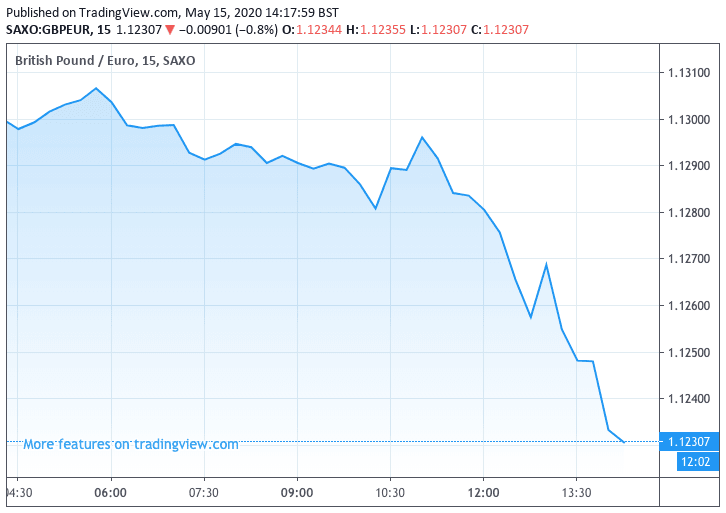 Above: Sterling's decline against the Euro depicted in a four-hour chart.

"It is very clear that a standard Comprehensive Free Trade Agreement, with other key agreements on issues like law enforcement, civil nuclear, and aviation alongside, all in line with the Political Declaration, could be agreed without major difficulties in the time available. Both sides have tabled full legal texts, there are plenty of precedents, and there is clearly a good understanding between negotiators," said Frost.

The tone of the UK's assessment on what is preventing an agreement from being struck is rather punchy:

"The major obstacle to this is the EU's insistence on including a set of novel and unbalanced proposals on the so-called 'level playing field' which would bind this country to EU law or standards, or determine our domestic legal regimes, in a way that is unprecedented in Free Trade Agreements and not envisaged in the Political Declaration. As soon as the EU recognises that we will not conclude an agreement on that basis, we will be able to make progress," added Frost.

The UK appears to be taking a more robust approach to talks, and we therefore suggest the odds of no deal being reached has risen somewhat.

In response to the UK's accusation that the EU is looking at unprecedented "novel and unbalanced" proposals, Barnier said in a statement in Brussels:

“The European Union is looking to the future, not to the precedents of the past. Trade policy has evolved. We are no longer in the 70s. EU trade policy must - and can - benefit sustainable development. It must protect social & environmental standards."

We expect Sterling to come under pressure as a result of what is increasingly looking to be a substantial impasse between the two sides.

Markets will however be wary of pressing a hard sell on Sterling at this stage, as we are witnessing a familiar pattern whereby negotiations tend to reach an apparent stalemate only for a deal to be agreed in the final minutes before the deadline.

Therefore, there remains a chance that the final round of negotiations set for June yield progress. If not, we would imagine final discussions between EU leaders and Boris Johnson could clinch a deal.

Barnier said some small steps have been made on fisheries, which has to date been a major stumbling block. We would imagine that if the outstanding issues are technical in nature in that they relate to 'level playing fields' and how many EU rules the UK intends to follow, a breakthrough is certainly possible.

Barnier said the European Union will not act in haste and that "the next round must bring new dynamism in order to avoid a stalemate between us. The EU will remain calm, firm on principles, and respectful."

However, Shahab Jalinoos, a strategist with Credit Suisse, says the British Pound is likely to remain under pressure for the foreseeable future based on a number of observations, including Brexit anxieties. "We remain skeptical that breakthroughs are likely and still see a downside risk asymmetry for GBP," says Jalinoos.

"It looks like a real stalemate. The UK is refusing to countenance the EU’s level playing field demands. Britain also said it would refuse any offer to extend the transition period. Both Frost and Barnier sounded downbeat on the prospects of a deal. Barnier said the positions are extremely divergent, Frost said very little progress has been made. A lot to do to avoid the dreaded no-deal – downside risks for GBP clearly evident. The pound is already beaten up pretty badly due to the wider macro outlook as a risk-on currency these days, and the Brexit risk has reared its head again to impart more pressure," says Neil Wilson, Chief Market Analyst at Markets.com.