- GBP/CAD down through cluster of supports between 1.69 and 1.70.
- After Brexit returns to haunt GBP and CAD sees month-end melt up.
- Domestic headwinds to stalk GBP into June as CAD rides risk rally.
- GBP/CAD eyes 1.6710-to-1.6721 but risks lower levels next month.

The Pound-to-Canadian Dollar rate was licking fresh wounds Thursday but its recovery potential is limited at best while the prospective downside could grow further if the Loonie remains on its front foot and Wednesday's update from Brexit negotiators is anything to go by.

Sterling was steadying after heavy losses in the Wednesday session that took the Pound-to-Canadian Dollar rate down through a cluster of key technical support levels, whcih had propped up the British currency for nearly a fortnight while also guarding the southbound path back to March crisis-period lows.

The Pound-to-Canadian Dollar rate has fallen below 1.70 and 1.69 in a move that was seen coming but was still trading near to the prior session's lows after the latest update to parliament from the UK's Brexit negotiator David Frost drained the earlier colour from the face of the Sterling.

This and other recent updates from negotiators on boths sides of the English Channel have got economists at Standard Chartered estimating a 50:50 chance "at best" of a "bare bones" trade agreement between the UK and EU, which means there might be a high chance of something like a 'no deal Brexit' style trade relationship becoming the default around year-end. The Pound however, could potentially see this and pay a heavier price for it as soon as next month.

"Talks could break down at some point in June," says Standard's Christopher Graham. "There has been some progress on fishing rights...But on issues such as the role that the European Court of Justice (ECJ) would play in future disputes, and level playing field (LPF) provisions such as environmental standards, competition policy, state aid, workers’ rights, and tax policy, both sides remain far apart." 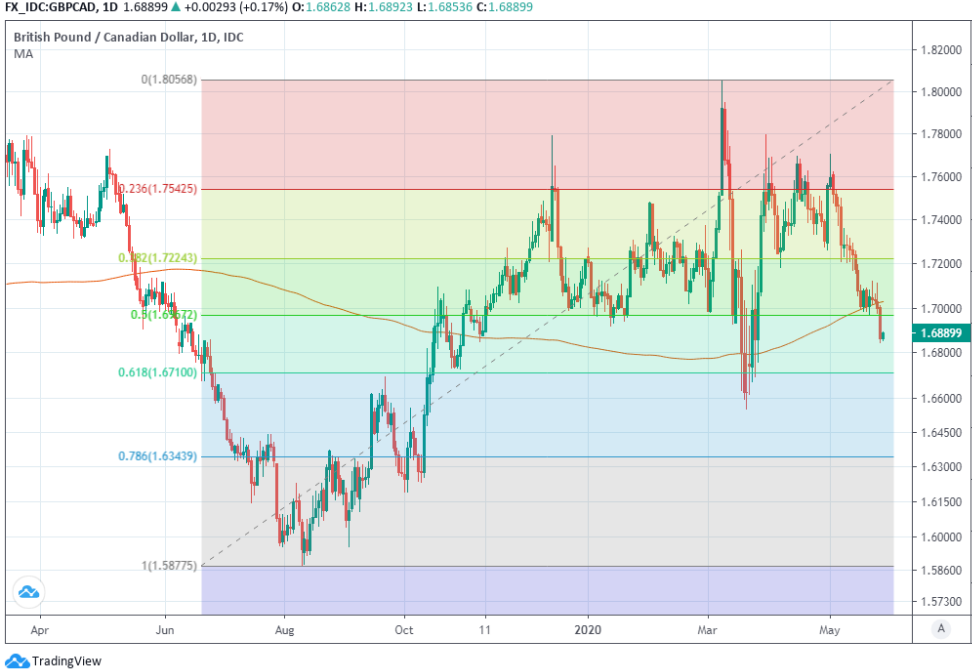 Sterling might now be liable for a decline to the 1.6710-to-1.6721 area over the coming days, which coincides with the 61.8% Fibonacci retracement of the August 2019 uptrend and the level implied by an amalgamation of projections from leading banks and research analysts followed by Pound Sterling Live. These are short-term possibilities, and the Pound still risks slipping below 1.65 and potentially as far as 1.50 in a worst case scenario over coming weeks.

The latter scenario might need Sterling's woes to conspire with a further recovery in oil or other Canadian Dollar factors to extend the steep decline that's already pushed the Pound-to-Canadian Dollar rate down -4.79% from its peak on May 01. Oil prices and stock markets are wild cards but Sterling could be tested by both Brexit headwinds as well as the Bank of England (BoE) next month.

One important reality for Canadian Dollar buyers is the above rates would only be available at interbank level if realised, with those quoted to retail and SME participants likely much lower. Specialist payments firms can help squash the spread between interbank and retail rates as well as lock-in the rates prevailing at any one time up to two years in advance of the relevant transaction.

Much about the Pound-to-Canadian Dollar outlook depends on relative price action in GBP/USD and USD/CAD given that it's an amalgamation of the latter two. USD/CAD has fallen almost one percent this week and strategists at three leading Canadian banks including Scotiabank, BMO Capital Markets and RBC Capital Markets see it falling further in the short-term, which places a heavy burden on GBP/USD if Sterling is to avoid ceding more ground to the Loonie. 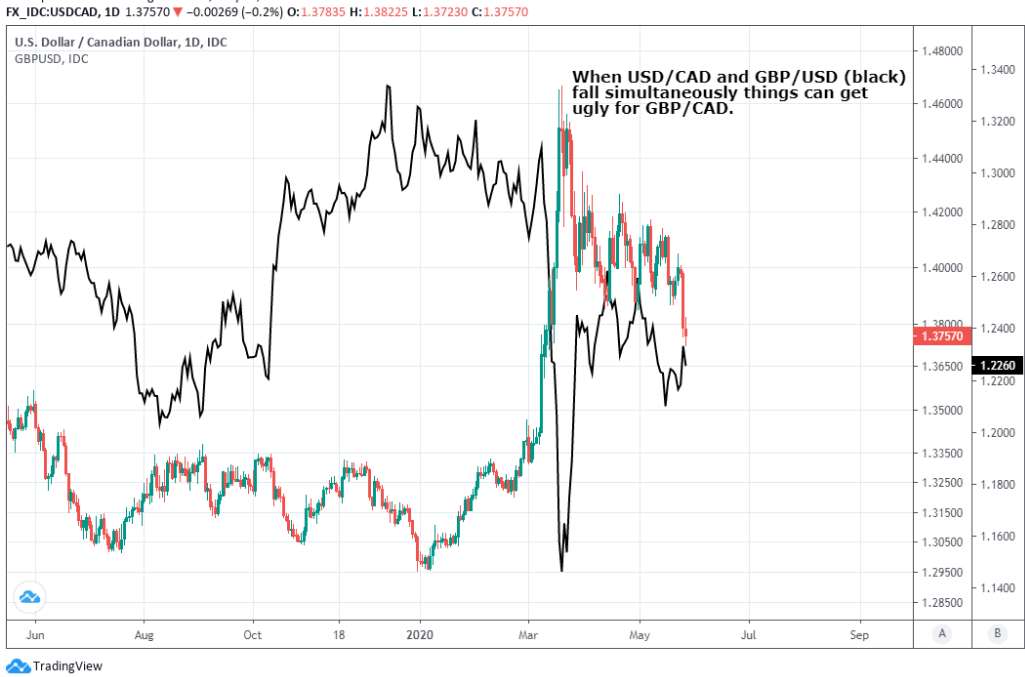 "USD/CAD had its 4th largest down day in absolute terms dating back to March 2016 heading into Tuesday’s close as the S&P 500 pierced the 200-dma at 3000 (though failed to close above 3000), with USD/CAD taking out the key triple bottom support at 1.3856. The bearish breakout now shifts the focus down to 1.3734 next, followed by a critical trendline that delineates the uptrend for the entire year at 1.3683," says RBC's Daria Parkhomenko.

Some analysts see scope for GBP/USD to run higher in the short-term and potentially as far as 1.2660, which would imply a sharp recovery back to 1.7447 for the Pound-to-Canadian Dollar rate if accompanied by a USD/CAD rate that holds steady around Wednesday's 1.3780. The rub for GBP/CAD though is there's not much reason beyond technical signals for expecting an increase in the British currency, if the risks faced by it are anything to go by.

This means such an outcome might only be possible in the event of widespread U.S. Dollar weakness and there's little reason for why USD/CAD wouldn't also continue to fall in an environment where the greenback is in all-out retreat. Put differently, a return to 1.7447 might be pie in the sky and if there's any upside at all to the Pound-to-Canadian Dollar rate, it could be limited in the short-term.

"Although we don't think late-month meltdowns in USDCAD are the new norm, we do think this particular meltdown could extend a bit further," says BMO's global head of FX strategy, Greg Anderson CFA. "CAD shorts outnumbered CAD longs by more than 3:1 just over a week ago. We've already seen somewhat of a cascade of stops, but the cascade could easily continue down to something like 1.3650. That is probably the size of move that would get the speculative community back to flat." 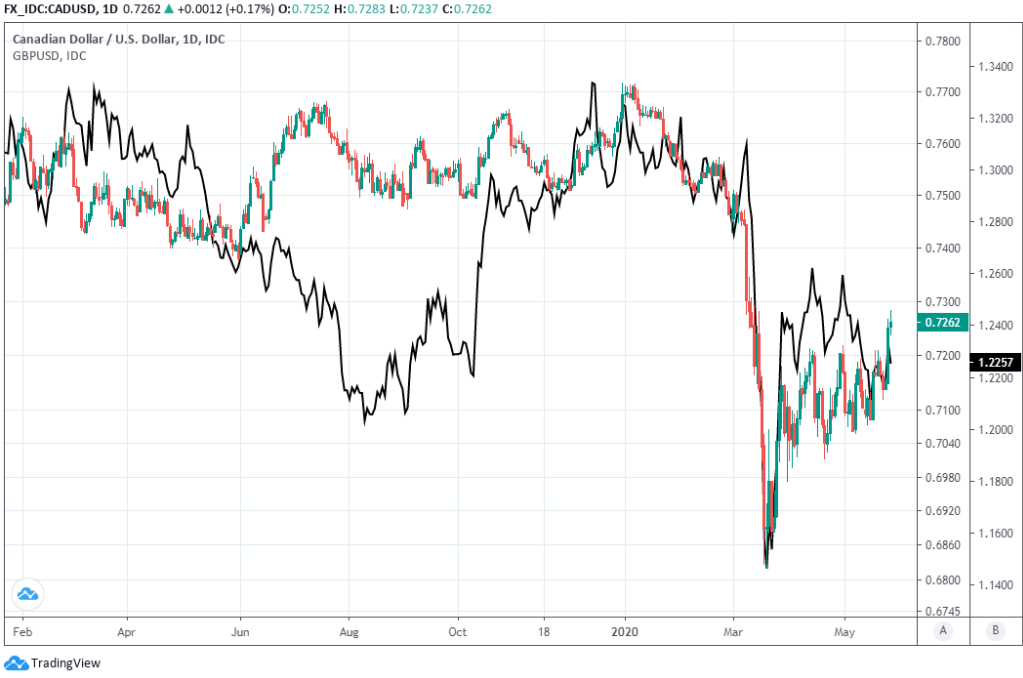 BMO has flagged what are multiple headwinds for the Pound-to-Canadian Dollar rate including oil prices, stock markets and legacy wagers by investors on further sharp increases in USD/CAD. The market for oil, Canada's largest export, is rebalancing in favour of prices way above the multi-decade lows that brought pain in March to country's oil-producing provinces and destruction to the stock markets the Loonie has a positive correlation with, which had encouraged hefty bets on new highs for USD/CAD.

Those bets were in the process of being unwound this week, requiring investors to sell the exchange rate, and BMO says the move might carry USD/CAD as far down as 1.3650 in the coming days. Anderson designed and operates BMO's rotating-financial-factor-model, which tipped a likely slide in USD/CAD a fortnight ago and at a point when the wider market was still looking for the exchange rate to return toward 2020 highs.

The bad news for Sterling is that a USD/CAD rate of 1.3650 would produce a Pound-to-Canadian Dollar rate that is at least as low as 1.6721 in the event GBP/USD remains at 1.2250 or falls further. Meanwhile, the Pound-to-Canadian Dollar rate would hit 1.7280 if GBP/USD rose to 1.2660 at the same time as USD/CAD fell to 1.3650. The first scenario might might require Brexit or the BoE to lean on Sterling in order to be seen, while 1.7280 might need radio silence from the Bank and on Brexit.

"Weakness below the recent range base at 1.3850 suggests the USD is shifting into a lower trading range at least. Noted support in the 1.3750/70 range has not provided the USD with any real foothold at this point and while short term trends look a bit stretched, the pattern of trade overnight, breaking down from a minor consolidation around 1.38, suggests that another, significant leg lower in USDCAD is the main risk at this point," says Scotiabank's Juan Manuel Herrera. "[GBP/USD] looks set to remain in a narrow range around the 1.23 mark for the time being yet absent yesterday’s climb it appears more likely to continue on a downward trajectory toward 1.20/1.21 rather than a push to 1.25." 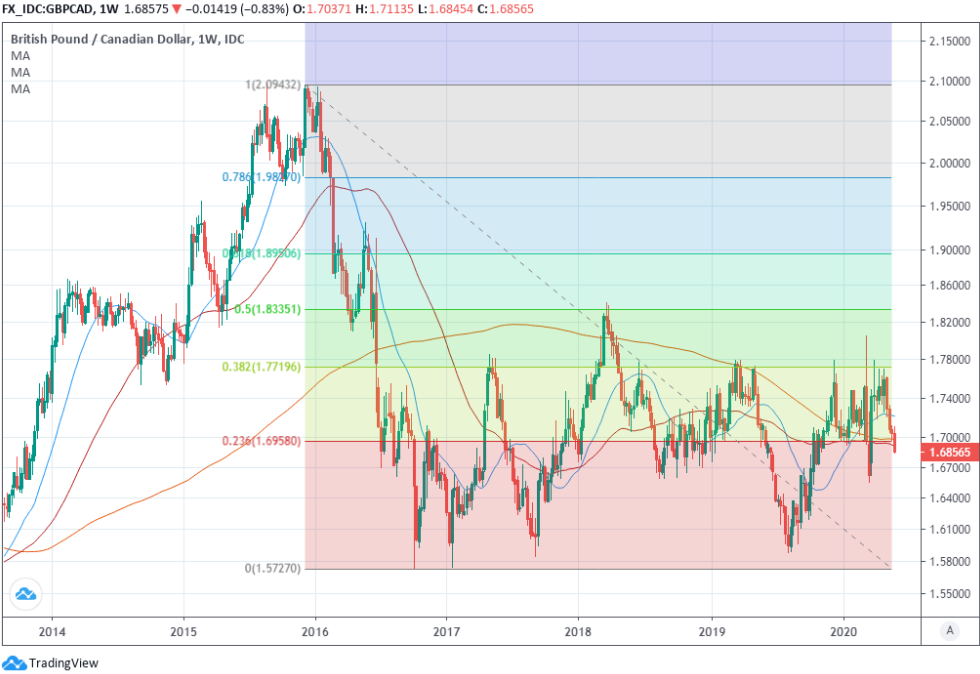