The Pound-to-Dollar rate burned Wednesday as Brexit angst returned just as investors were reverting attention to the upside, although a possible summer of discontent means Sterling might still be fool's gold even at current levels.

Sterling was on the back foot to begin with Wednesday but had recovered somewhat when UK Brexit negotiator David Frost sent it tumbling to intraday day lows that erased much of its Tuesday gains.

The Pound-to-Dollar rate about-turned after Frost poured cold water on suggestions of progress in the trade talks when telling parliament that he's "beginning to think we might not make it by the 30th of June," referring to a point at which Prime Minister Boris Johnson is expected to decide whether it's worth continuing trade negotiations with the EU or simply throwing all of the government's weight behind efforts to prepare for a 'no deal Brexit' at year-end.

"Sterling got a smack and the euro pulled back from its highs of the day as Britain’s chief Brexit negotiator confirmed what we already knew; that UK-EU talks are not going very well at all. Whilst a classic last-minute EU fudge is still broadly anticipated by the market, the language from David Frost was not optimistic. GBPUSD moved sharply off the 1.23 handle, turning lower to test 1.2250," says Mark Wilson, chief market analyst at Markets.com. 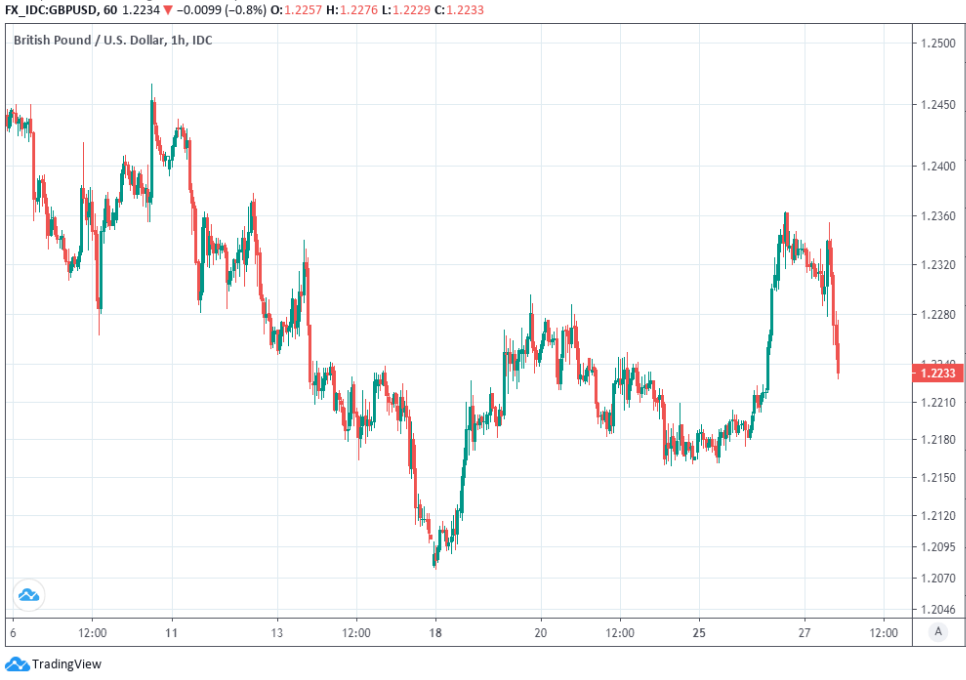 Frost was responding to a question about the prospect of a deal being reached on fisheries, after the EU was reported to be preparing to drop its 'maximalist approach' to them. British waters and the fish stocks that frequent them are currently a 'common resource' that entitles everybody at the European table to an automatic share of quotas, which is a situation the EU wants to preserve but which Brexit campaigners have long been strongly against.

The fisheries rub was after Frost said there's a "fundamental disagreement" with the EU on "most aspects" of the so-called 'level playing field,' which is Brussels' catch-all label for a bunch of legal terms that would preserve and perpetuate its influence and control in a range of policy areas and at a point when the British objective is to end that influence and control.

Frost subsequently described negotiator Michel Barnier's mandate from the EU as one that's "not likely to reach an agreement" and told lawmakers the bloc "needs to evolve its position." This was as it emerged that Barnier has attempted to bypass the British government with a letter to a collection of much-diminished opposition parties, in an apparent bid to foment the same activism that produced multiple extensions of the Article 50 period in 2019.

Above: British Pound exchange rates and performance over 1-week and 1-month horizons. Bottom of bucket for this month.

"The British government is under fire for its crisis management, the Bank of England is considering negative interest rates and the Brexit negotiations are stuck again. Hardly surprising therefore that Sterling is the loser amongst the G10 currencies this month. But nonetheless: things can always get worse. For the time being Sterling traders are still reasonably relaxed," says Thu Lan Nguyen, an analyst at Commerzbank, in a Tuesday research note.

Brexit was burning the Pound Wednesday as the government remained besieged and in fire-fighting mode amid opposition and media fanfare over allegations that the Prime Minister's special adviser, and his Brexit mastermind, breached 'lockdown' rules during the panic that ensued after Johnson himself tested positive for the coronavirus. The latter was a development that'd later see the PM hospitalised and placed into intensive care.

"GBP/USD has eroded its 55 day ma and as a consequence downside pressure has been alleviated and focus has shifted to the top of the range at 1.2643/61," says Karen Jones, Commerzbank's head of technical analysis for currencies, commodities and bonds. "The market is underpinned by the 50% retracement of the March-to-April advance at 1.2030 below which lies the minor psychological 1.2000 mark. A daily chart close above the 200 day moving average is required to target the 78.6% Fibonacci retracement at 1.2818 (not favoured)." 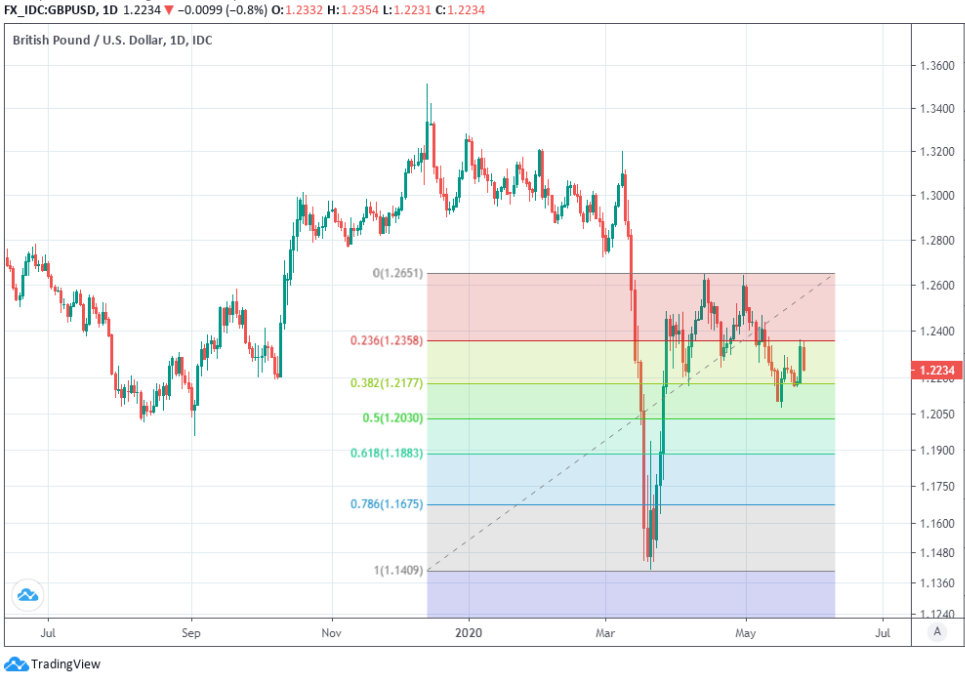 Above: Pound-to-Dollar rate shown at daily intervals with Fibonacci retracements of March-to-April rebound.

Earlier price action had seen Sterling overcome its 55-day moving-average and a trendline that had been in focus among some analysts, leading to a recently-rare bout of optimism that favours a challenge a of 1.26463-to-1.2661 in the coming days. Much depends on appetite for the Dollar and developments in London, although there's no shortage of domestic concerns that could potentially weigh heavier on the Pound in the weeks ahead.

The Brexit talks resume on June 01, the last round before PM Johnson's choice and a June 30/July 01 EU deadline for the UK to request an extension of the transition period. Frost reiterated to parliament on Wednesday the government's claim that it will not be extending the transition. The rub for the Pound is that with the government, Bank of England (BoE) and everybody else preoccupied with coronavirus, the currency will have to cover the cost of an continued increase in 'no deal Brexit' concerns.

But those aren't the only headwinds facing the Pound, which has also been blighted this month by now-reduced fears that the BoE will eventually turn to a negative interest rate policy that some analysts have billed as a supposed form of economic stimulus that could prove life-threatening for the currency. Few believed the Bank would actually go ahead with such a move although the mere suggestion of it was enough to engender weakness in Sterling. 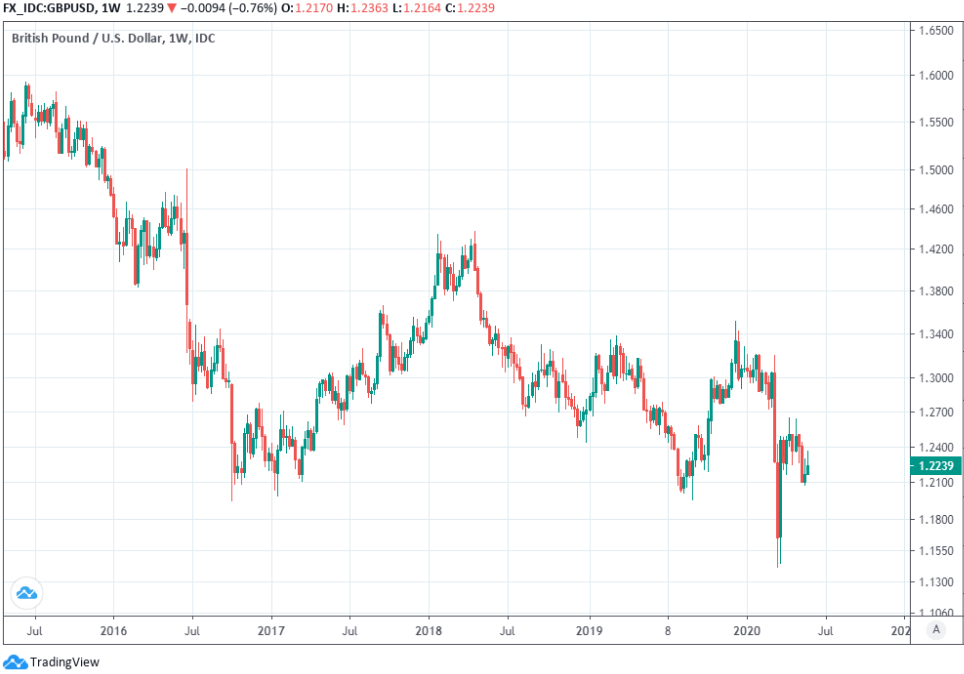 All told, Brexit headwinds are returning to blight the Pound at a point when domestic political instability could be about to rear its head again and as the BoE contemplates the perceived merits of a negative interest rate policy.

The last time that Brexit truly troubled Sterling the Pound-to-Dollar rate was found trading near 1.20, although that was before the coronavirus came along and imposed exorbitant costs on a public purse that's responsible for the developed world's largest current account deficit as a share of GDP and without the BoE toying with a Frankenstein's monster of a monetary policy.

"The prospect of offering private and official holders of GBP assets a negative benchmark rate is frightening. The US would be able to get away with NIRP for a while. The Eurozone has managed to weather a negative-yielding EUR because the EUR is liquid enough to be the “anti-dollar” – the mechanics of the FX market mean reserve managers need to hold EUR-denominated assets even if they’d rather avoid them. But the GBP is a smaller and less “essential” component of global FX reserves," says Stephen Gallo, European head of FX strategy at BMO Capital Markets. "The real effective value of the EUR is currently 5% below its 2010 level, and its share of global FX reserves has dropped by about 4% since NIRP was introduced. If the GBP experienced a similar result, its share of FX reserves would drop to zero."