The British Pound has suffered an abrupt shift in fortunes and fallen against the majority of the world's largest currencies amidst a fresh injection of nerves concerning the status of Brexit talks.

The Pound had been riding high on talk of a potential breakthrough in talks just 24 hours earlier, but was ultimately shot down in the midweek session following a briefing by the UK's Chief Negotiator David Frost.

Frost told UK lawmakers that the current offer placed on the table by the EU in ongoing trade negotiations is not one that the UK can accept and that there is no chance of a negotiations being extended, even if the EU requested more time.

Frost told Parliament's Brexit committee the current EU offer, "is not a mandate that is likely to produce an agreement."

Sterling had already been under pressure against the Euro owing to a breakthrough by EU nations on how to fund the economic recovery from the coronacrisis, but the latest developments concerning trade negotiations accelerated the declines. 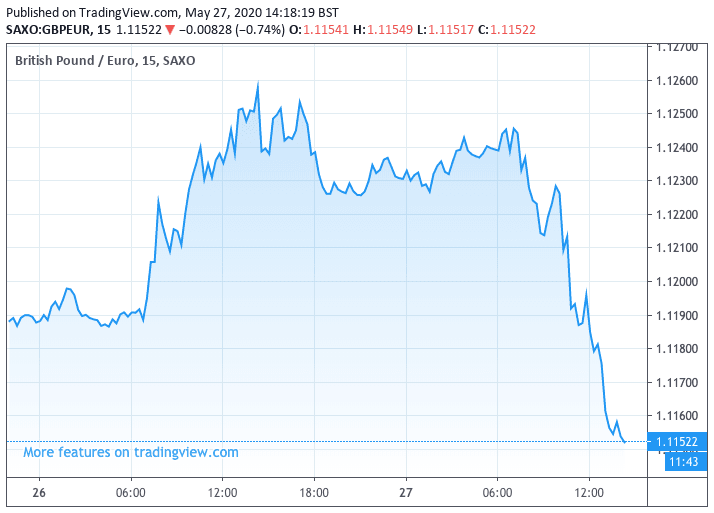 "Sterling got a smack and the Euro pulled back from its highs of the day as Britain’s chief Brexit negotiator confirmed what we already knew; that UK-EU talks are not going very well at all. Whilst a classic last-minute EU fudge is still broadly anticipated by the market, the language from David Frost was not optimistic," says Neil Wilson, Chief Market Analyst at Markets.com.

Frost told MPs he thinks there remains a fundamental disagreement on most aspects of the level playing field provisions the EU demands.

"The EU is still coming to terms with the fact that there's a large country in Europe that doesn't want to be part of the EU's structure in some way, or to work on EU norms, or to relate to the EU as the reference point of its activity," said Frost.

The EU is seeking to ensure the UK signs up to a host of rules and regulations that would dictate how the UK economy and industries operate, in order to ensure the UK does not gain an unfair advantage over its cross-channel rivals.

The UK argues that such conditions are not applied to other countries that have already signed trade deals similar to that which they are now seeking.

Frost told MPs because the EU are looking to apply stricter standards on the UK than they have required of other nations it leaves him "skeptical that Level Playing Field provisions in the EU side are much to do with access and they're more about control".

For those watching the value of the Pound it appears the market is entering a familiar phase whereby volatility increases ahead of key negotiating deadlines.

"Undoubtedly Sterling becomes increasingly exposed to headline risks around Brexit as we move out of the worst of the Covid-19 pandemic and back into the cut-and-thrust of negotiations," says Wilson.

Expect Sterling to become increasingly reactive to trade negotiation-related headlines as we move through June. Early June sees the final round of negotiations take place, while mid-June sees EU leaders hold a summit to discuss progress.

The UK has been set a deadline of end-June by which time a formal request for negotiations to be extended must be made.

It would appear foreign currency markets are resigning themselves to the fact that any breakthrough will be hard won and will only arrive at the last minute, if at all.

The Pound had rallied on Tuesday following a Reuters report that said the EU was ready to amend its position on the issue of fishing rights, which had become a major sticking point for the two sides.

However, a subsequent statement from the Irish Minister for Agriculture, Michael Creed, showed he and peers from France, Germany, Spain, Denmark, Sweden, the Netherland and Belgium would look to press Barnier to maintain an existing stance with regards to fisheries.

According to Creed, the UK should be expected to cede the same unfettered access to its fishing waters in any future trade agreement as it would if it were still a full member of the EU.

"Michel Barnier has to work within the mandate that's given him by Member States and they in their wisdom decided that their opening pitch for this should be that as far as possible the Common Fisheries Policy should continue after we left. In many other areas they tell us nothing can be the same after you've left. To be fair to him Mr Barnier has given a few public signals he thinks this may not be a completely realistic position and we'll have to see if they can move forward. Clearly it's not a runner for us," said Frost.