The Euro-to-Dollar rate crossed a Rubicon Wednesday as investors welcomed European Commission proposals on the financing of a coronavirus recovery fund, but the analysts community is divided in its views on the outlook and some have warned that the Euro could soon reverse course.

European Commission chief Ursula Von der Leyen is set to propose a landmark €750bn (£677bn) increase to the executive body's budget to fund a mix of grants and loans to help European Union members pull their economies out of the coronavirus crater, with two thirds in the form of grants.

Details were released in a tweet by European Economy Commissioner Paolo Gentiloni ahead of an address by Von der Leyen to the EU parliament.

The plan will be funded by European Commission borrowing from markets, which is not unprecedented but is rare. It expands last Monday's Franco-German proposal for €500bn of grants.

France and Germany's proposal met pushback from 'frugal' Northern members of the EU who at the weekend counterproposed a €500bn package of loans.

"EU Recovery Fund stimulus is a little-too-late, smaller than the US & doesn't formally resolve EUR existential risk (especially if it's wrapped around a "recovery fund"). Most importantly... it hasn't been agreed yet & may be watered down. Careful chasing EUR higher," says Viraj Patel, a strategist at Arkera. 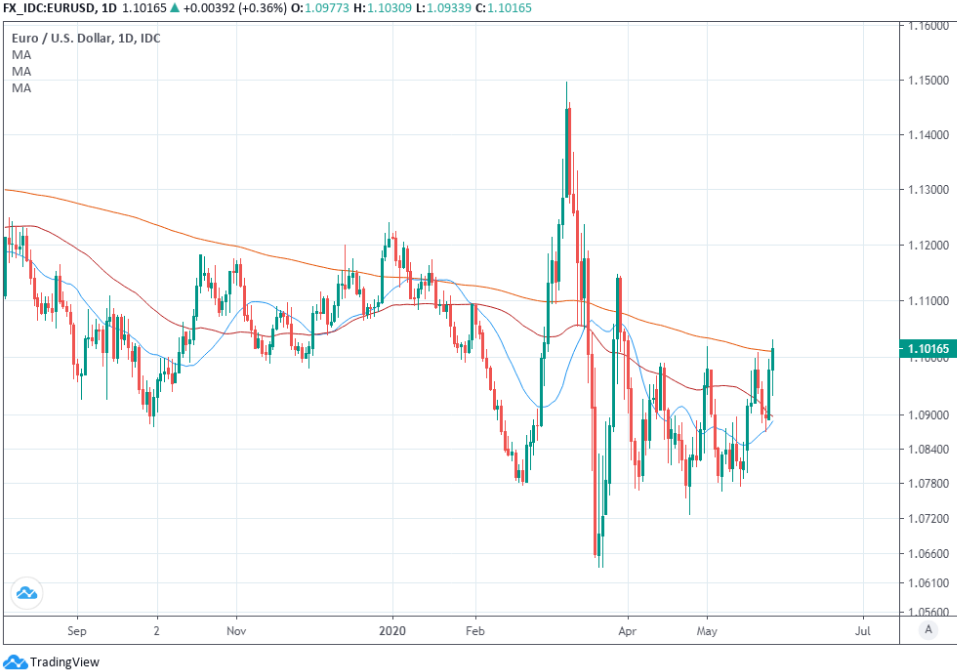 Above: Euro-to-Dollar rate rises above 1.10 and creeps past 200-day moving average (orange line).

Reading between the lines of the various competing proposals, analysts and financial markets saw the seeds of a compromise being sown by the commission on Wednesday, which would yet result in an agreement on the size and rough structure of the fund. However, there are still banana skins lurking on the path ahead, especially around the kinds of conditions that members might have to satisfy in order to tap the funds.

Italians, weary from a decade of austerity force-fed to them through the hands of the European treaties and commission, might not have tolerance for conditions that renew their humiliation by inserting European fiscal probation officers into the national treasury and government but without Prime Minister Guiseppe Conte's vote in the European Council the fund will never see the light of day.

The same is true of European Council votes from leaders of Austria, Denmark, Netherlands and Sweden, who've all opposed the idea of financing state spending in other European countries but especially those who've so often been painted and perceived as 'profligate,' not to mention all manner of other things.

Put differently, there is a so-far insurmountable division in Europe that still has capicity to sink the proposals and the Euro-to-Dollar rate, even if the latter did overcome a technical roadblock Wednesday. 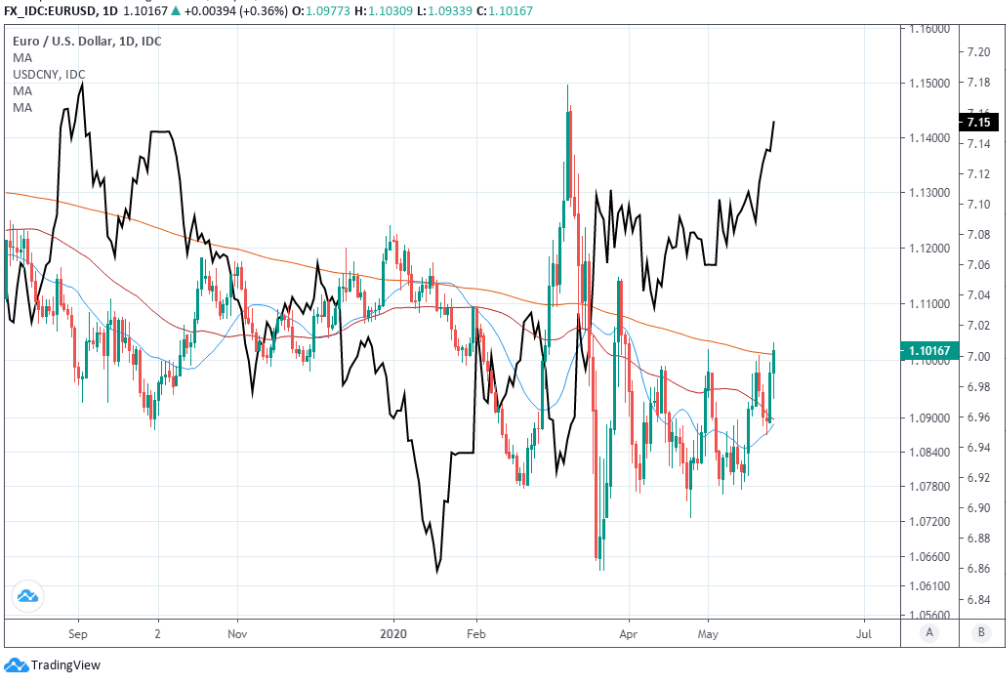 "EUR has broken 1.10 again but is it enough to become a new trend? It’s more important if we see more of the Frugal Four start to soften up and accept the idea (as this needs to be unanimous)," says Jordan Rochester, a strategist at Nomura. "It’s tempting to chase this move given the risk on sentiment but quite often US-China tension headlines have kept these short breaks above 1.10 contained. If we break above 1.1050 then this will pull in a new round of EUR buying as it will have clearly see the monotonous 1.08-1.10 range EUR has been in for weeks now, come to an end."

Rochester and Nomura are still sellers of the Euro and would only look to change this if either the recovery fund is approved or the currency sustains a close above 1.1050. They're mindful of the impact that U.S.-China tensions and other factors could have on the single currency.

The Euro hasn't sustained a move above 1.1050 since a capitalution of bets on emerging market assets and resulting exodus of capital from the developing world lifted the single currency by more than 6% against the Dollar between late February and early March.

Wednesday's proposal follows weeks of uncertainty over whether European leaders would ever manage to act at all given that national governments including those in Europe took action in March and April to support shut-down economies while a fractious debate over 'Euro bonds' stymied collective action. Europe acknowledged that it's missed a boat when it began talking about a recovery fund rather than action to limit damage done by the virus. 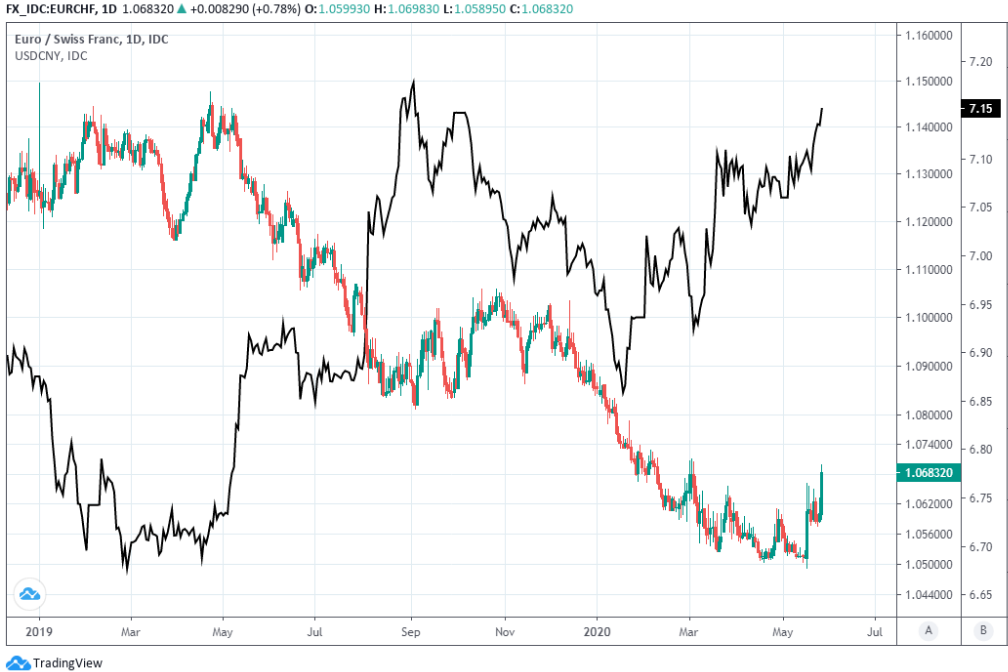 Above: Euro-to-Swiss Franc rate at daily intervals and alongside Dollar-China (black line).

"This is the starting point for negotiations and you can expect the ‘frugal four’ to push back against the size of the budget and the amount of grants, while Spain and Italy won’t take much to loans if there are conditions attached. This does go further than the Franco-German proposal and the market is clearly happy with it," says Bipan Rai, North American head of FX strategy at CIBC Capital Markets. "EUR/USD move above 1.10 is clearly pricing in an end result that is closer to Franco-German proposal. Never underestimate the impact that solidarity within the EU will have on the EUR. Recall that the 2017 EUR/USD rally was initiated once Macron defeated Le Pen in the last French election. An extension to say 1.14-1.15 in the coming months is possible, but the right play might be to be long EUR/CHF which has far more headroom."

The European response to the coronavirus, or absence of it so-far, asks aloud whether the bloc is sufficiently cohesive and if the interests of members are adequately aligned for the EU and its single currency to have a long-term future. Failure to agree a decisive and confidence-inspiring response, having had months more than national fiscal and monetary authorities, would risk being perceived as a sign if-not declaration that the entire project and its currency are living each day on borrowed time.

Europe's single currency overcame resistance at 1.10 and the 200-day moving-average at 1.1011, which had barred its path higher last week on many occasions previously, in response to the proposals but analysts are clearly divided on whether this move will be sustained. Von der Leyen will meet Bundestag President Wolfgang Schauble Wednesday and EU parliament chief David Sassoli will speak about the fund at 16:00 Wednesday but the most important points on the road ahead are the June 11 meeting of Eurozone finance ministers that will take place ahead of the June 18-19 European Council. It's at those two latter meetings that the Euro might encounter a banana skin.

"EUR/USD last week tested but failed, in a quite a brutal way, to breach the 1.1000 level but that correction lower has itself lost momentum and we are looking like a retest of the 1.1000 level is plausible in the coming days. Technically, a close clearly above 1.0980 is required to really change the short-term picture – EUR/USD closed at 1.0982 yesterday making it four occasions in April and May to close at around this level and on each of the previous three occasions failed the following day. In that regard today’s price action has greater meaning technically," says Derek Halpenny, head of research, global markets EMEA and international securities at MUFG. 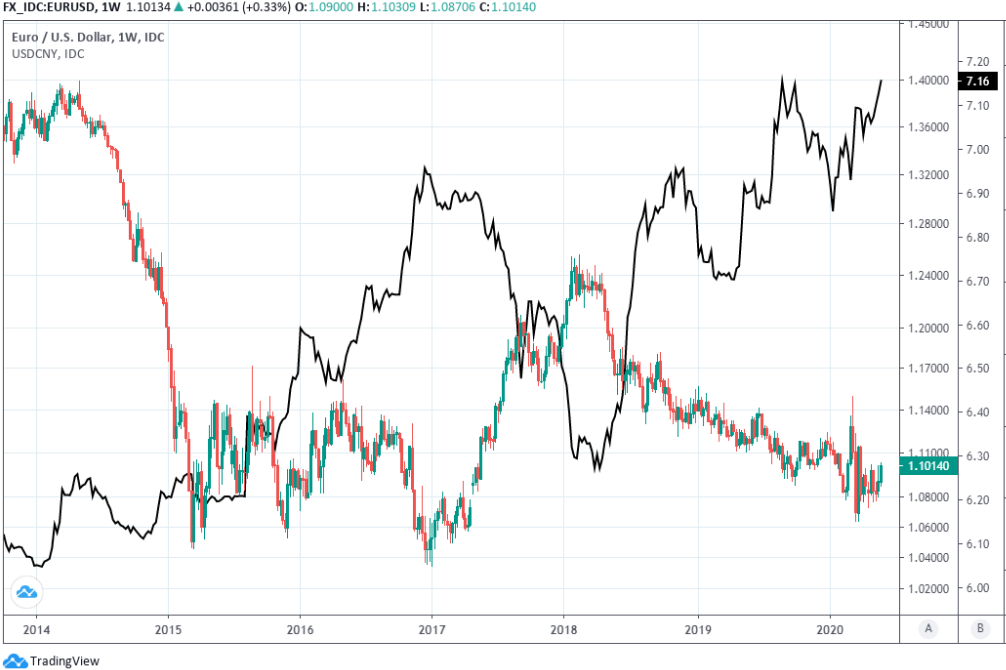 Above: Euro-to-Dollar rate at weekly intervals alongside Dollar-China (black line).