- USD in comeback after Trump says Hong Kong response on way.
- Amid protests, clashes in response to Beijing's latest provocation.
- U.S. response may include sanctions, restrictions on student visas.
- Response to come ahead of weekend, tensions threaten recovery.

U.S. President Donald Trump said overnight that he will be talking about Hong Kong "over the next couple of days" when asked whether he would impose sanctions on China or restrictions on visas for would-be Chinese students over the government's latest provocation in the city.

This was before demonstrators took to the streets, leading to clashes with authorities that were reported by the South China Morning Post to have seen police fire pepper balls at protesters who're thought to be of Hong Kong's pro-democracy movement.

There's no obvious connection between White House statements and the protests. Local press reported a heavy police presence on the streets ahead of the demonstrations as well as a Legislative Council debate on a bill that would "criminalise insults" of China's national anthem; March of the Volunteers.

The bill is connected to a 'draft decision' of the government, ever the Chinese Communist Party, that attempts to give mainland security services a role policing the city, contrary to the one-country-two-systems settlement that many see as key to the success, if-not survival of the Asian financial centre.

Secretary of State Mike Pompeo later indicated via his Twitter account that Hong Kong's special status could now be under threat as a result of the Chinese actions. Removal of that status, which is in the hands of an increasingly China-hawkish Congress, would threaten around $38bn of trade flows between the U.S. and Hong Kong as well as, potentially, the appeal of the financial hub to international institutions.

Today, I reported to Congress that Hong Kong is no longer autonomous from China, given facts on the ground. The United States stands with the people of Hong Kong.

Jakobsen says the USD/CNY rate, which reflects price action in the closed-off and on-shore market that's dominated by the Peoples' Bank of China (PBOC), is the best barometer of Chinese intent and U.S.-China relations. 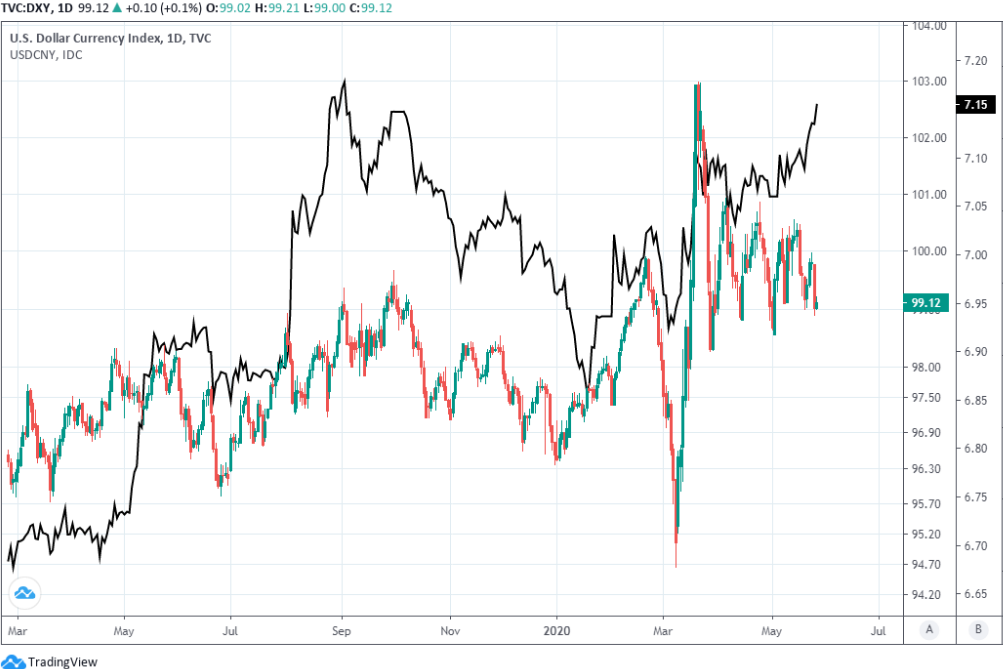 The exchange rate tends to rise whenever tensions are increasing, and sometimes that's because the PBOC encourages it by tinkering with the ranges it permits the exchange rate to trade in. It's not a proper market.

A rising USD/CNY rate is a problem for many currencies including the Pound, Euro and others out in the emerging markets given the significance of the trade relationships that some countries have with the world's second largest economy.

AUD/USD, NZD/USD and EUR/USD are often negatively correlated with USD/CNY which, together with its offshore counterpart USD/CNH, eyed highs set at the height of the trade war on Wednesday. 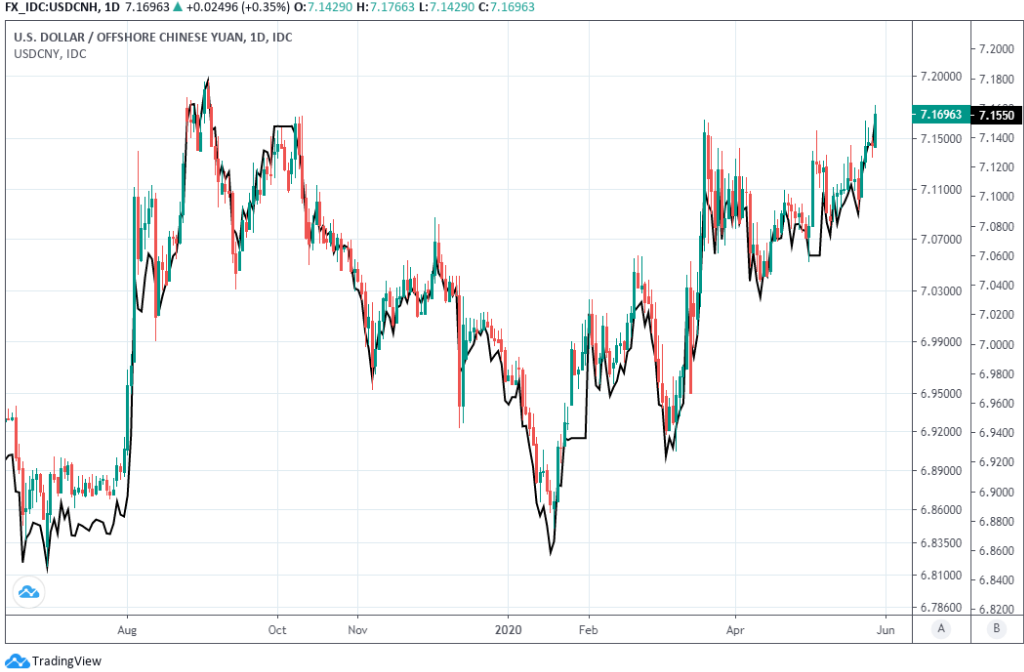 The Dollar Index was 0.25% higher at 99.16 in the morning session Wednesday, which still leaves its lower than at the start of the week after punishing losses on Monday and Tuesday, with price action in the barometer driven by declines in EUR/USD, GBP/USD, a fractional gain for USD/JPY and a 0.42% increase in USD/CHF. USD/SEK, another Dollar Index constituent, was also higher.

"Central Hong Kong today is filled with police (and protestors)," says Michael Every, a Hong Kong-based strategist at Rabobank. "This is a warm up for the national security law that will soon be put in place by Beijing, and which yesterday was revealed to: 1) ban foreign judges from sitting on cases related to national security; and 2) ban not just “acts” against national security, but “activities” that can “seriously undermine” it. That is a very broad brush to be painting with in that geography, allege critics."

President Trump's threat and Wednesday's demonstrations follow sabre rattling from Tuesday and a range of hostile acts or threats of them toward countries like Australia, Canada and UK among others. 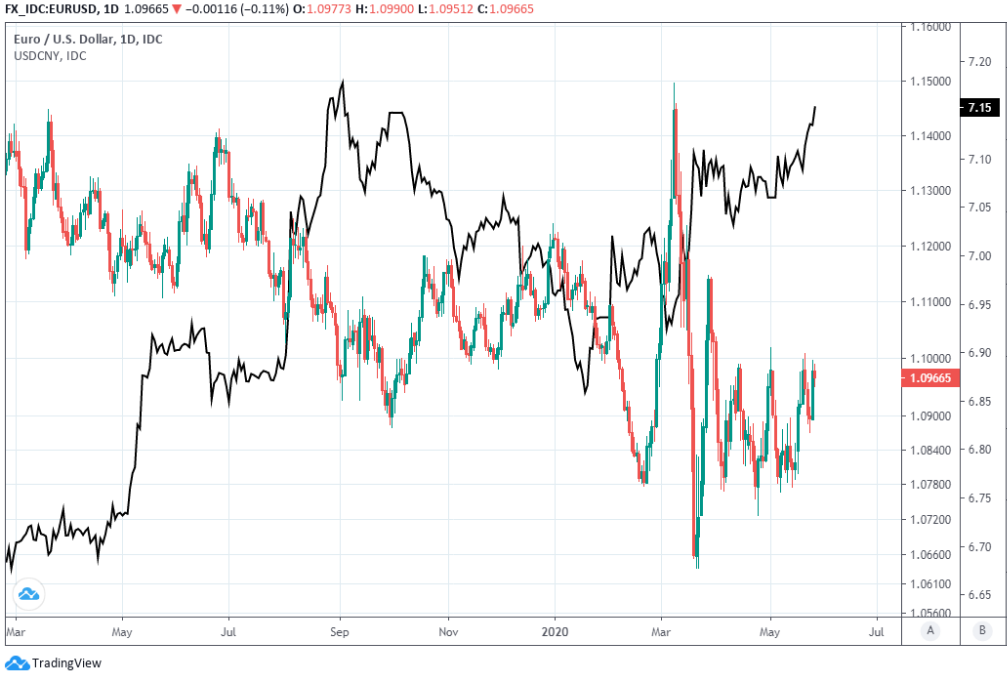 China imposed market-closing tariffs on a range of Australian exports last week after Prime Minister Scott Morrison called for a global inquiry into the origins of the pneumonia-inducing coronavirus that was first detected in Wuhan and had infected nearly 6 million people as of Wednesday and claimed the lives of 350k.

It's threatened to act against Canada if it honours an extradition agreement with the U.S. over the detained Huawei executive and alleged sanctions buster Meng Wanzhou and has lashed out at the UK over Prime Minister Boris Johnson's decision to review Huawei's involvement in the nation's telecoms infrastructure.

That's a possible sop to the electorate but one that the White House might argue is not nearly sufficient. The UK and U.S. are currently engaged in trade talks.

"Another major concern is the resurfacing of US-China tensions," says George Vessey, a currency strategist at Western Union Business Solutions. "If sanctions are enforced and global trade is disrupted once again, renewed risk-off sentiment may trigger another market downturn." 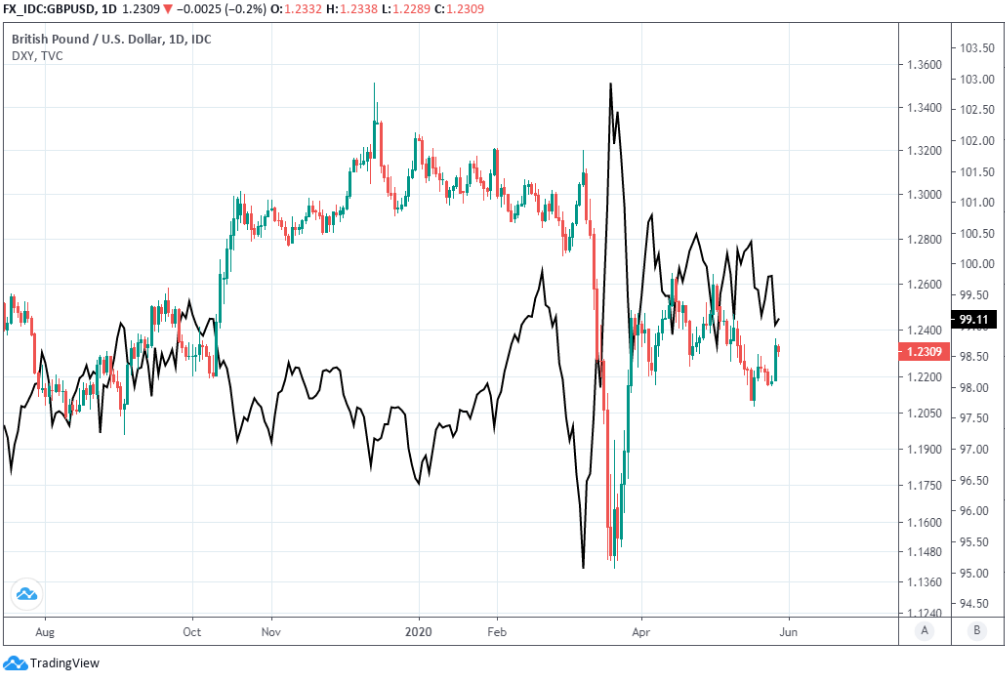 Chinese aggression is clearly aimed at evading or otherwise stifling the scrutiny and accountability that are prerequisites for good governance and the global leadership role the country covets.

It remains to be seen what the U.S. response will be but tensions are an upside risk for the Dollar and a threat to the global economic recovery out of the coronavirus trough, the Pound-to-Dollar rate and many other currencies.

However, this is just one facet of the political powder keg that could go bang as the second quarter comes to a close, with further implications for currencies.

"A potential move towards $1.24 may be seen again in the near future, but GBP/USD faces a downward trendline at the $1.2350 mark which may inhibit this run higher. A U-turn might open the door to a test of the $1.20 level again should sterling sentiment sour," Vessey says.