The Pound-to-Dollar rate trod water Wednesday but could need a miracle if it's to avert fresh losses over the coming weeks even it does establish a new, lower trading range in the coming days, as some analysts suggest it will.

Pound Sterling edged higher against the Dollar for a third consecutive session Wednesday after earlier declines were arrested near to the 50% Fibonacci retracement of the March-to-April rebound at the opening of this week.

However, the British currency had risen by just 0.09% against the greenback once well into the North American session despite all other major currencies having gained at least three times that relative to the big Dollar.

Wednesday's price action is further evidence of Sterling being the problem child of the major currency universe, with even the safe-haven Japanese Yen and Swiss Franc rising 0.31% and 0.61% respectively during the session. This was as the oil-linked Canadian Dollar rose 0.40% while the China-exposed Australian and New Zealand currencies gained 0.86% and 1.01% respectively.

"Sterling has ebbed and flowed with the broader risk tone during overnight trade," says Eric Bregar, head of FX strategy at Exchange Bank of Canada. "Its rebound is trailing other G7 currencies and we think this is largely because of the money market’s renewed focus on negative UK rates." 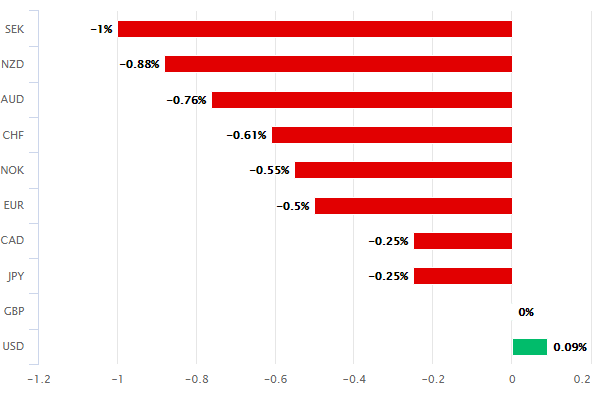 Every major currency was higher against the Dollar while stocks were rip-roaring and ICE oil futures had climbed 3%, indicating robust appetite for risk in a session where investors were still to some extent enthused with hopes that a coronavirus vaccine will soon be found. Sterling's underperformance was evident before and after Bank of England (BoE) Governor Andrew Bailey told the Treasury Select Committee he's changed his views on negative interest rates and won't rule out resorting them in the future.

Bailey appeared before parliament hours after the Debt Management Office sold UK government bonds with a negative interest rate for the first time, a move that came after 2-year British bond yields fell below zero last week. This is also days after BoE chief economist Andy Haldane was reported by the Telegraph to have said the bank still considers negative interest rates as a part of its tool-kit.

The Dollar had come under pressure over exactly that subject last week with overnight-index-swap prices indicating that investors were betting the Fed would shift to negative interest rates next year, which had seen implied interest rates for other countries including the UK begin to suggest that negative rates were also a posibility for them. Since then the market has gone from pricing a mid-2021 shift to negative rates for Sterling, to a December 2020 fall below zero.

"GBP’s rebound from late last week appears at odds with the high chance that the UK does not reach a deal with the EU on trade," says Shaun Osborne, chief FX strategist at Scotiabank. "Price action over the last 48 hours or so suggests the GBP will struggle to extend its rebound from Sunday’s low of 1.2076 to test the 1.23 mark and a failure to make a move beyond this point is likely to set up the pound into a new 1.21-1.23 trading range." 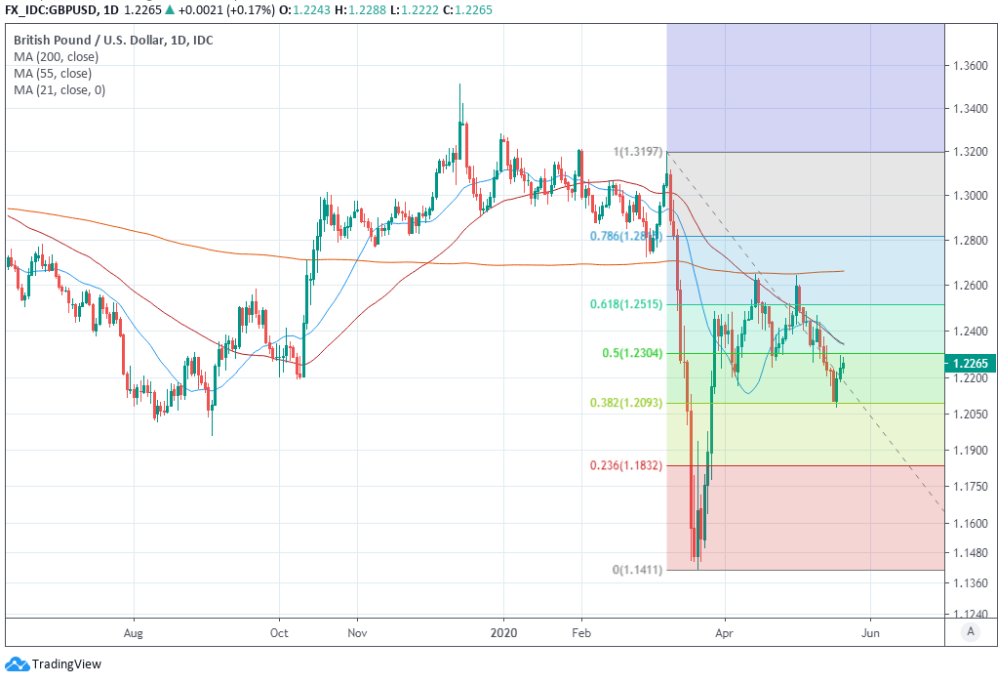 Above: GBP/USD loses momentum ahead of 50% Fibonacci retracement of March 2020 fall and 21 as well as 55-day
moving-averages. Faces tried-and-tested resistance between 1.23 and 1.2660.

Sterling has risen for three consecutive sessions despite the newfound focus on negative rates and some analysts including the Scotiabank team say it could be in the process of finding a new, lower trading range that spans the gap between roughly 1.21 and 1.23. Wednesday's underperformance does suggest the Pound could struggle to extend higher even at the best of times, but certainly if the mood in broader financial markets darkens again.

Much of this week's price action has been driven by hopes that a coronavirus vaccine will soon be available, but cold water has already been poured on that prospect while tensions between the U.S. and China have risen rapidly over familiar trade issues as well as more novel complaints about the Chinese government's handling of the initial coronavirus outbreak. China is also picking bones again over U.S. relations with Taiwan.

In addition, Sterling faces a litany of its own domestic headwinds that includes but is not limited to market fears over the direction of the BoE's benchmark interest rate. Brexit trade talks feature prominently on that list while nearby tried-as-well-as-tested resistance will also an impediment to Pound-to-Dollar rate upside on the charts should Sterling somehow make it above the 1.23 level that looked set to bar its path higher Wednesday.

In other words, and as much as the British currency may be attempting to find a new and lower range, the Pound-to-Dollar rate might need a miracle if it's to avoid fresh losses in the days and weeks ahead.

This miracle might need to be as significant as an extension of the Brexit transition period, which cannot be completely ruled out for two reasons including that Prime Minister Boris Johnson previously claimed he'd rather "die in a ditch" than drag out Brexit negotiations only to do exactly that in October.

Furthermore, the gaps between the UK government's lines on the subject suggest there are at least some circumstances in which it might consider an extension, although the EU would first need to compromise on what have been billed as its own 'red lines' in the negotiations which might be unlikely given the adverse optics of being seen to cave-in to British negotiators or even worse, an utlimatum from London. A document setting out the UK's approach to negotiations and published in February suggested that if by July 01 Johnson could have confidence the substantial body of a trade agreement would be ready by year-end, he might then request an extension.

"The Government would hope that, by that point, the broad outline of an agreement would be clear and be capable of being rapidly finalised by September. If that does not seem to be the case at the June meeting, the Government will need to decide whether the UK’s attention should move away from negotiations and focus solely on continuing domestic preparations to exit the transition period in an orderly fashion. In so doing, it will be necessary to take into account in particular whether good progress has been possible on the least controversial areas of the negotiations, and whether the various autonomous processes on both sides are proceeding on a technical basis according to agreed deadlines," the UK government said.

Monday's Franco-German agreement also suggests that some influential EU members might be in the mood for compromises, although it's far from clear that such a spirit of cooperation would extend as far as the subject of Brexit. Caving-in to a British ultimatum at the very first (July 01) hurdle would hardly shore up the bloc's political future, which is the Franco-German objective behind Monday's agreement to fund grants to weaker, virus-hit EU members. 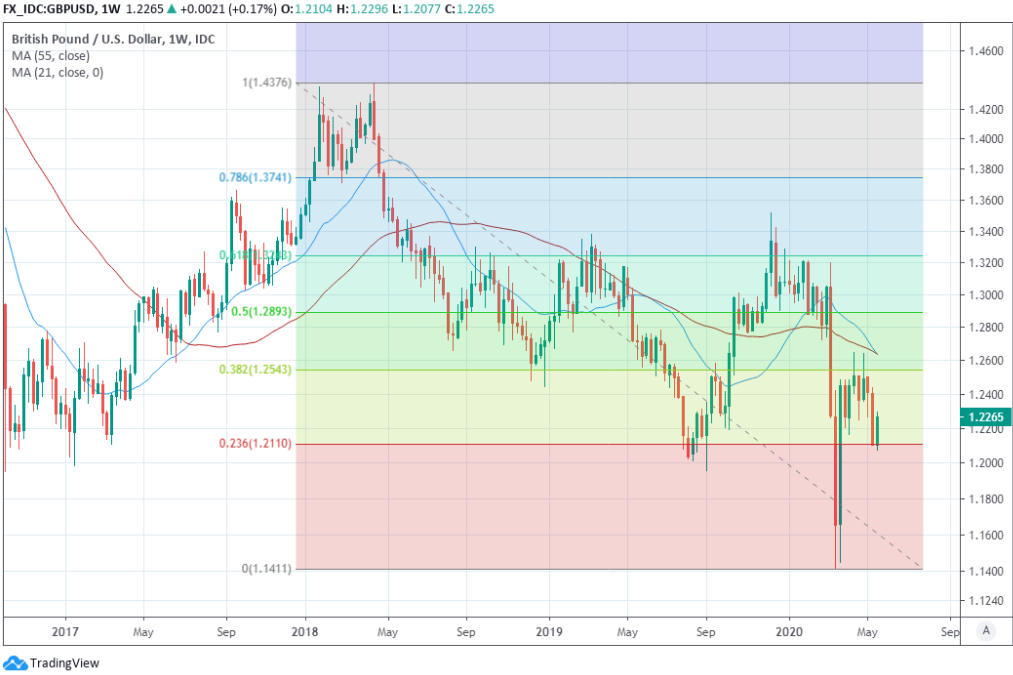 Above: GBP/USD faces resistance on weekly chart, from moving-averages and 38.2% Fibonacci retracement of 2018 trend.

Absent that miracle, which would be politically costly for both sides, Sterling could succumb to a cocktail of BoE attempts to push it over in the playground ahead of the July 01 deadline for requesting an extension and fears over a 'no deal' Brexit. A market-anticipated June increase in the BoE's quantitative easing programme, along with further possible speculation about a shift to negative interest rates at the Bank, could add to Brexit concerns and weigh on the Pound. More QE might see some British bond yields falling further below zero and risk making Sterling even less attractive to investors.

"The Chancellor has dramatically increased government borrowing and the Bank of England is buying the economy time by mopping most of it up (for now). How much QE they can do depends on how much it weakens the pound," says Kit Juckes, chief FX strategist at Societe Generale. "How on earth does it make sense to even consider adding negative rates to the mix? The economic benefits are dubious but the power of a cocktail of negative rates and massive QE to weaken the currency seems clear and if the pound falls enough, it will make QE harder. I'm not quite at the stage standing outside the Bank with a placard, but I might get there. It just goes to show that even when it's a really bad idea, central banks eventually consider negative rates. Poor old sterling!"

The BoE needs a weaker currency but if it pushes it so far that confidence in Sterling as a store of value is left completely and utterly shattered the bank would've done more harm than good. Few expect it to actually go ahead and shift to a negative interest rate policy, which would see Bank Rate cut below zero with commercial lenders and private savers then effectively charged for saving money, while an even lesser number see it as a good idea.

However, by the time the Thursday 18 June BoE decision is near the Pound could plausibly be suffering from a noxious cocktail of market fears about negative rates and the prospect of something like a 'no deal' Brexit neutering or otherwise bearing down on the economy's recovery out of the coronavirus trough once past year-end. That's unless Downing Street and the EU stoke hopes of an eventual extension to the Brexit transition and, or, the BoE puts a decisive end to fears about negative rates in the interim.

"The decision to include the whole EU, not just the Eurozone economies, is going to antagonise fiscally prudent, non-Euro nations," Juckes says of the Franco-German agreement. "That will cause enough uncertainty to cap the euro for now. There is clearly a better case for shorts in GBP/JPY than EUR/JPY now, and even more so in being short GBP/AUD as well as GBP/JPY, given the slight risk-on bias and the move higher in resource prices. But I'll stick with EUR/JPY as long as 120 holds."