- While U.S.-China tensions rise, as Brexit pressures set to mount.

The Euro-to-Dollar rate extended its nascent rebound Tuesday but was had lost momentum and was floundering in a battle to overcome nearby technical obstacles, as tensions between the U.S. and China festered and Monday's Franco-German recovery fund idea looked set to hit a snag

Europe's unified unit reclaimed the 1.09 handle Tuesday after being buoyed in the prior session by a surprise Franco-German agreement to provide the European Commission with additional budgetary resources to aid the continental recovery out of the coronavirus troughm as well as reports of progress by U.S. biotech firm Moderna in efforts to develop a vaccine, which has lifted stocks, commodities and risk currencies alike this week.

"The EUR’s three-day rally has pushed it firmly away from making a clear breach below the 1.08 mark after it failed to follow its early-May drop with a symmetric climb toward 1.10," says Juan Manuel Herrera, a strategist at Scotiabank. "The 1.10 level will likely act as a strong limit for the EUR, which is more likely to remain in its late-Mar onward 1.08-1.10 channel."

Tuesday's price action took the Euro above the 55-day moving-average of prices at 1.0932 and as far as 1.0975, its highest since early May, although non of Tuesday's gains were matched by the relative-strength-index measure of momentum. The RSI dipped lower even as prices set new highs on the hourly charts in what is known as "bearish divergence" in technical parlance and which can often precede a correction.

Europe's single currency ceded the 55-day moving-average back to the Dollar at the continental close, but would've faced meaningful additional obstacles overhead even if it was able to get across that level. The 1.10 level barred the Euro's path higher in April and again in early May, while the 200-day moving-average just above that threshold adds an extra layer of resistance that leaves the Euro in need of significant momentum to get above it. 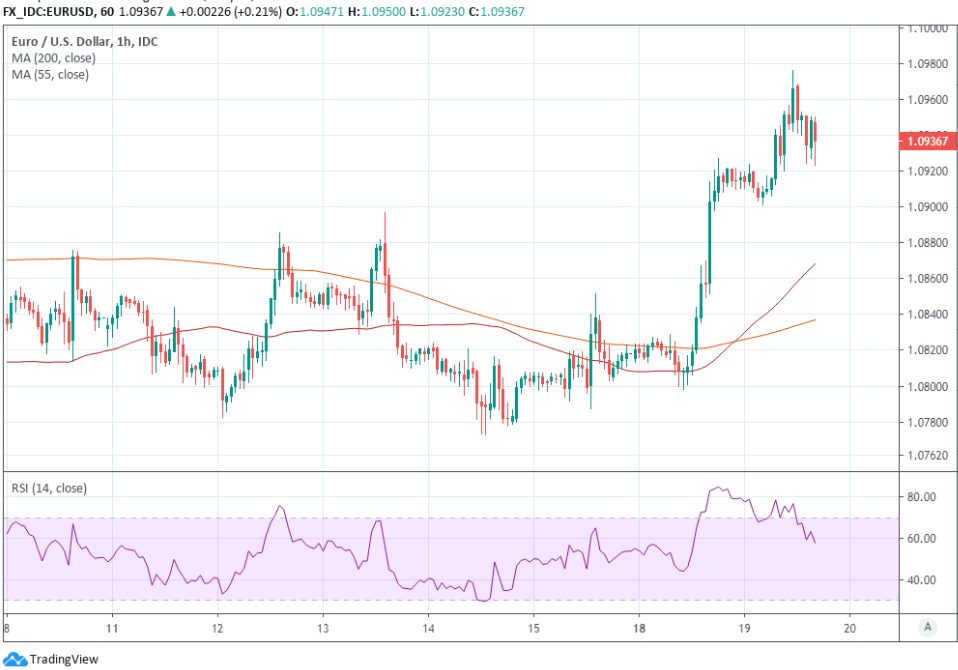 Additional momentum might be difficult to generate if trade tensions between the U.S. and China continue to rise or if the recovery fund hits further snags because that would leave the Euro at risk of slipping back toward the bottom of its 1.08-1.10 range. Northern European national leaders continue to oppose some details of the Franco-German recovery fund idea ahead of the June European Council summit where it's set to be discussed.

"The market closed NY trade in good technical form; comfortably above the 1.0900 mark. We felt that this technical achievement put the EURUSD buyers in charge near-term and allowed for the follow-through buying we saw earlier today as the BTP/Bund yield spread compressed further.  The market has now pulled back swiftly however following a breakout attempt above the 1.0950s in early NY trade and so we may now need to wait until Powell/Mnuchin’s testimony to see how strong these buyers really are," says Eric Bregar, head of FX strategy at Exchange Bank of Canada.

The fund would see members provided with grants from the European Commission budget instead of loans, in a bid to ease the burden on national balance sheets, and would mean the European institutions have mobilised almost 10% of the bloc's GDP to support member states hit hardest by the disease. It would also be a small step toward the mutualised debt issuance that many say is necessary to make the Euro sustainable.

However, Austria, the Netherlands, Denmark and Sweden have opposed the idea of grants instead of loans and will now table their own alternative proposals for the fund. Northern Europe has always opposed debt mutualisation but Southern Europe has been hit hard by the virus and was over-indebted to begin with so some of those effected countries have turned to Europe for help. Disagreements over how best to respond collectively has already caused a spectacle and weighed on the Euro, but could do so again if the loomig period of horse-trading leads fresh questions to be asked about the bloc's future. . 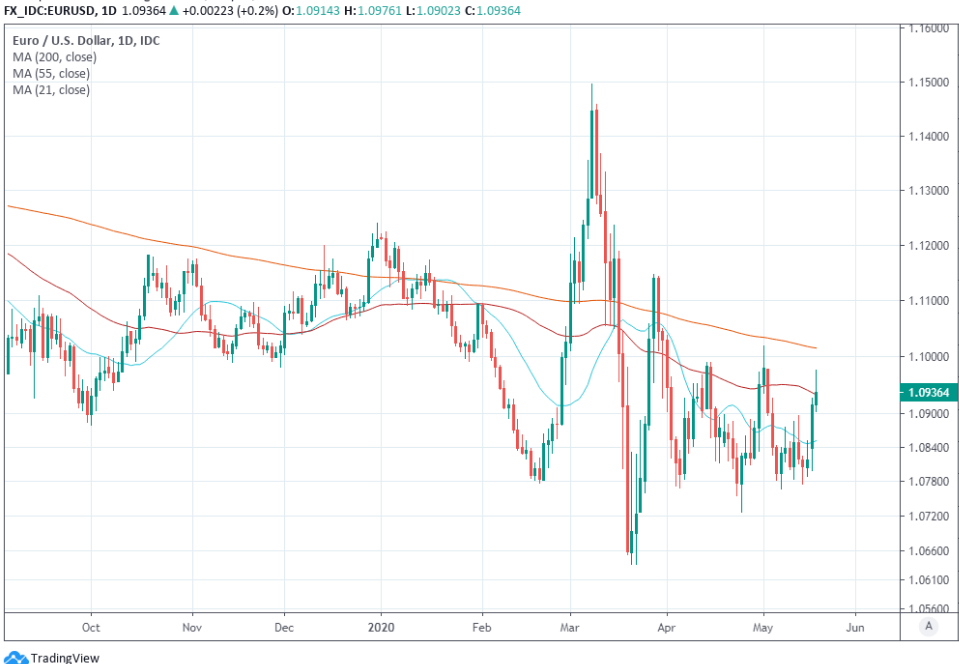 "This proposal isn't a fix of any kind yet. For now, it's just something to shake out euro shorts, against the yen as much as the dollar. We will go on bumping along the bottom of the post-2014 range, and within the post-2008 downtrend, for a while longe," says Kit Juckes, chief FX strategist at Societe Generale. "As for vaccine optimism and bouncing equities, we'll see how long it lasts. Virus experts urge caution, so I'll listen to them. Where infection rates go in the West after lockdown eases is more important than anything else, while equities may be turning already to refocus on trade tensions."

Alternative proposals from the Northern countries could mean there's scope for compromise and that a decisive European response to the coronavirus catastrophe will eventually be the result, although horst-trading will clearly be necessary and especially as support for the European coronavirus response will also require support for the European Union's next seven-year budget, negotiations over which are always drawn out and arduous at the best of times.

The prospect of that horse-trading and any resulting doubts about the recovery fund could easily take the wind out of the Euro's sails, and that's assuming that neither the fresh bout of U.S.-China trade tensions nor the Brexit process, which arrives at an inflection point at the end of June, has done that first. Some forecasters see the Euro-to-Dollar rate falling to 1.02 while many are still bearish in their views about the prospects of the single currency in the coming week.

"The implications for EUR/USD are not Euphoric yet – details matter, with many unanswered questions (timing of issuance could be a while, perhaps even be next year) with the risks lying towards a more nuanced positive than initial headlines may suggest," says Jordan Rochester, a strategist at Nomura. "We remain short EUR/USD as there remains a pipeline of negative asymmetrical Geo-political risks ahead. But the risks are of a short term pop higher to test the 1.08-1.10 top end of the recent range." 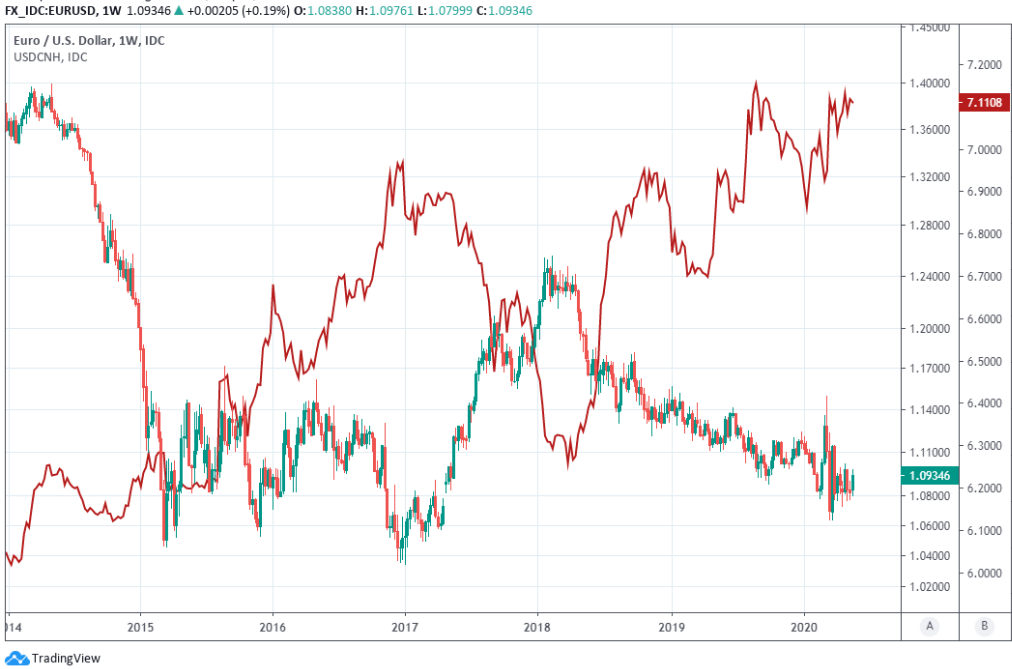 President Donald Trump threatened to withdraw the U.S. from the World Health Organization Tuesday if it does not "commit to substantive improvements," to how it operates within the next thirty days, after accusing the body of effectively having aided China's alleged attempts to cover up the initial outbreak of coronavirus. The statement was posted to President Trump's Twitter feed hours before the 'The World Health Assembly' voted for a resolution calling for an independent review into the handling of the coronavirus outbreak, including its origins, which is something that China has made apparent attempts to stifle.

"EURUSD  is not necessarily the most sensitive to the overall USD direction, but is a key piece in establishing the broader USD levels and particularly whether the pressure on the USDCNY rate is waxing or waning. The 1.0800 level has proven very sticky of late, with several forays below quickly gathered up. A failure and daily close through 1.0750 could set the broader FX market on edge from here and add to the attention on the USDCNY rate to boot," says John Hardy, head of FX strategy at Saxo Bank.

The U.S., China and other countries traded blame over the coronavirus at the World Health Organization just days after President Trump told Fox "we could cut off the whole relationship" with China, and as trade tensions rise again. The two sides exchanged fire last week with the U.S. taking steps to keep American technology out of Huawei hands, drawing threats of retaliation from a Chinese government controlled publication.

Tensions are rising as the world's two largest economies supposedly attempting to implement January's 'phase one deal' that had largely ended the trade war between them. This is a risk to the Euro-to-Dollar rate given that the single currency often demonstrates a strong negative relationship with the USD/CNH rate, which could rise sharply in response to a second trade war, although the effect that Brexit headwinds have on Pound Sterling might also be important in the weeks ahead too.