- As GBP/USD wobbles and wavers amid mounting downside risk.

The Pound-Canadian Dollar rate was testing support around 1.72 Wednesday but headwinds are mounting for the British exchange rate as the Loonie draws an algorithmic bid from a BMO Capital Markets financial model and the downside risks continue to stack up for Sterling.

Pound Sterling ceded ground to around half the major currency bucket including the Canadian Dollar on Wednesday as a month-long run of underperformance continued. But price action came with the Loonie also soft against the U.S. greenback, which stabilised Wednesday after Federal Reserve Chairman Jerome Powell attempted to talk markets out of speculation suggesting that negative interest rates are just around the corner in the U.S.

Currencies were trading in a defensive manner as U.S.-China relations took a turn for the worse, with The Global Times reporting Chinese threats to retaliate against U.S. entities and persons who pursue legal challenges against it over allegations that the government there first attempted to cover up the coronavirus rather than immediately notifiying international bodies and counterparts. The report relates to American businesses and citizens filing lawsuits in U.S. courts that seek damages for losses suffered as a result of the coronavirus. It comes as the world's two largest economies attempt to implement the 'phase one deal' that ended the trade war between them.

The Pound-Canadian Dollar rate edged lower amid this fresh bout of risk aversion in the currency market when it normally tends to rise during times of investor unease, which could be another indication of how Sterling might be falling from favour in some parts. But the real rub for the Pound-Canadian Dollar rate is there could be more  downside ahead if a programmatic BMO Capital Markets indicator for the USD/CAD rate is anything to go by. 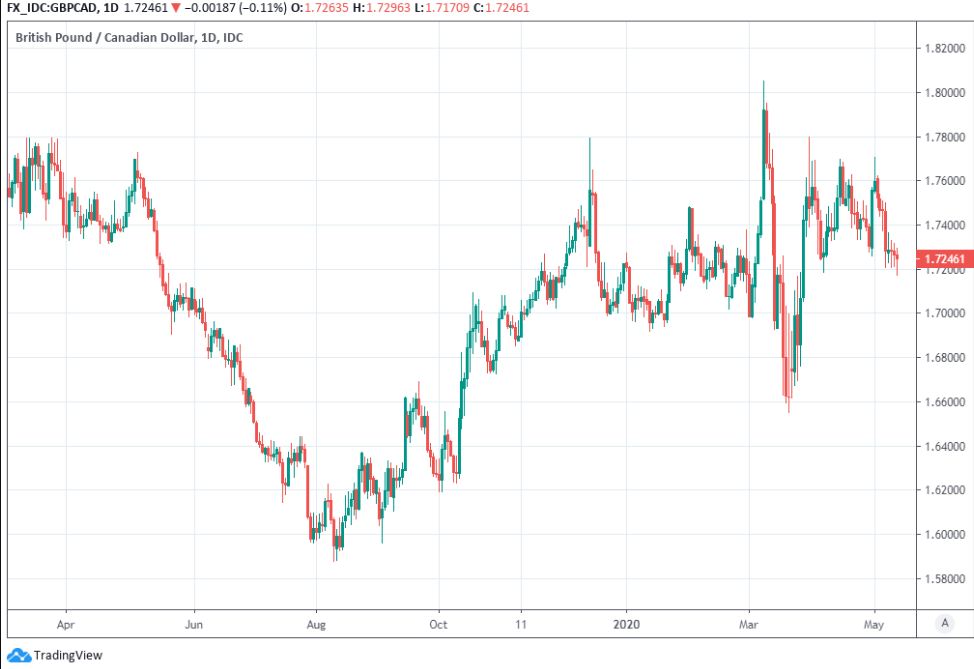 "The model's fair value (FV) finished the day 1.4003. A month ago, the model had FV at 1.4037, so from that perspective, FV continues to trend lower. However, that downtrend is flattening out. The downtrend in FV is why the model has a bias to sell rallies. This position should remain in place until spot USDCAD moves back below fair value. We wouldn't be surprised if that occurred over the next day or two," says Greg Anderson CFA, global head of FX strategy at BMO.

BMO's rotating-financial-factor-model continuously monitors four types of interest rate differential, four different proxies for commodity prices and four separate measures of investor risk appetite. It then combines the variable from each category that is best at predicting one-day-ahead price action over a three-month lookback window to produce a USD/CAD signal. It advocates 'long' positions when prices are below fair value as the fair value level is trending higher and vice versa, but has advocated selling USD/CAD three times since April 22.

It now suggests at least another 0.7% decline to 1.4003 or below for USD/CAD, or 0.7% upside for the Canadian Dollar, and at a point where many are of the view that there's mostly downside to play out in GBP/USD. That's a recipe for a falling Pound-Canadian Dollar rate if there ever was one, as the exchange rate is effectively an amalgamation of GBP/USD and CAD/USD. 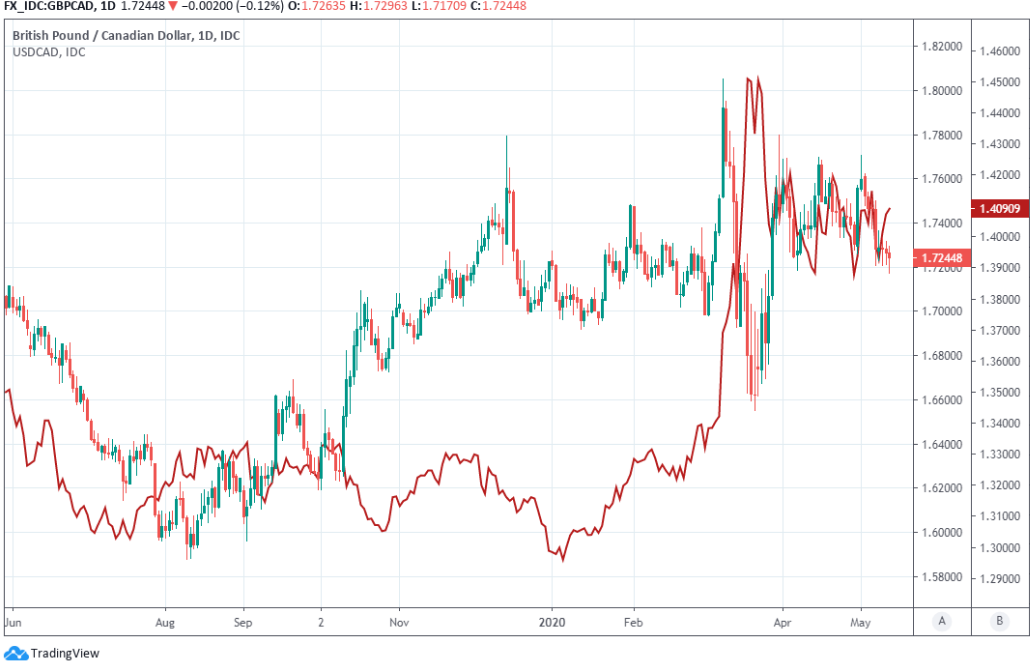 Problematically for Sterling, a USD/CAD rate of 1.4003 would put the Pound-Canadian Dollar rate down at 1.7108 even in the unlikely event that GBP/USD remains around Wednesday's 1.2217 level. The reality however, is that many and increasing numbers of analysts see the GBP/USD rate on route to 1.20 or below in the weeks and months ahead. The 1.20 level implies a Pound-Canadian Dollar rate of just 1.6804 when accompanied by a USD/CAD rate of 1.4003.

This means the bottom of the 2020 range could be beckoning to the Pound-Canadian Dollar rate, which has spanned the gap between 1.6550 to 1.80 but spent most of its time trading between 1.70 and 1.78 this year. A 1.6804 market price will also leave the Pound-Canadian Dollar rate sitting roughly on the midpoint of its the post-referendum range, as downside risks are mounting again for the British currency. Pound Sterling Live reported Tuesday how GBP/CAD might be risking a 1.6680-to-1.70 range up ahead.

Sterling is caught between a fiscal rock and an economic hard place, with the UK still in 'lockdown' as others reopen and at a point when Brexit headwinds are also back in the picture. This toxic cocktail has got analysts decidedly bearish on Sterling for the short-term and it might take either a sharp move lower by the U.S. Dollar or an unexpected request for an extension of the Brexit transition in order to prevent further losses from being seen. 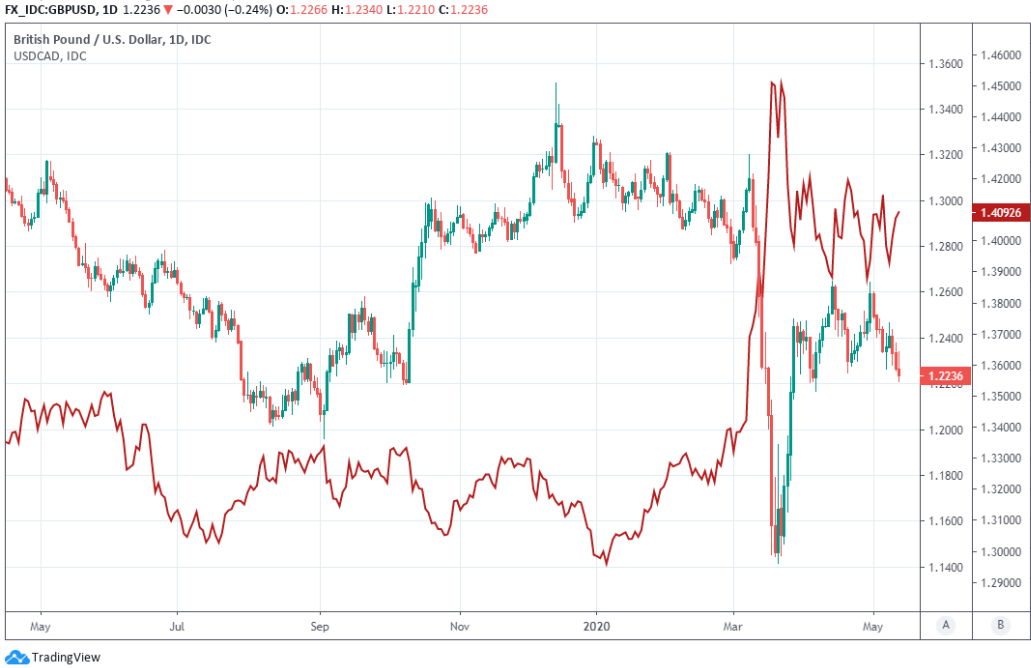 "GBPUSD 1.20 has been a long-held view but a similar bearish expression is possible using non-USD fiscally robust alternatives such as Scandies, AUD or CAD – without having to take an outright “risk off” posture by using JPY or CHF as the long side," says Shahab Jalinoos, head of FX strategy at Credit Suisse.

Chancellor Rishi Sunak extended on Tuesday the scheme that sees the UK government pay 80% of salaries for 7.5 million people so that it now runs into October. The government will continue to pay a substantial share of wages for struggling firms but will also ask them to cough up a progressively larger share of the bill from July, at a point when some of those companies will have earned little if-any revenue since late March.

This has left the Pound caught between a fiscal rock and an economic hard place because of a combination of the scheme's cost and the additional wounds that might be inflicted upon the collapsed but still-locked-up economy with every withdrawal of government support. Meanwhile, a much lesser debt-to-GDP ratio means Canada and the Loonie might be able to carry the can that is the cost of the coronavirus without breaking the bank or riling the investors who plug the current account deficit. That could be bad news for the Pound-Canadian Dollar rate if it leads to simultaneous falls in GBP/USD and USD/CAD, or simply lesser upside for USD/CAD than downside for GBP/USD. 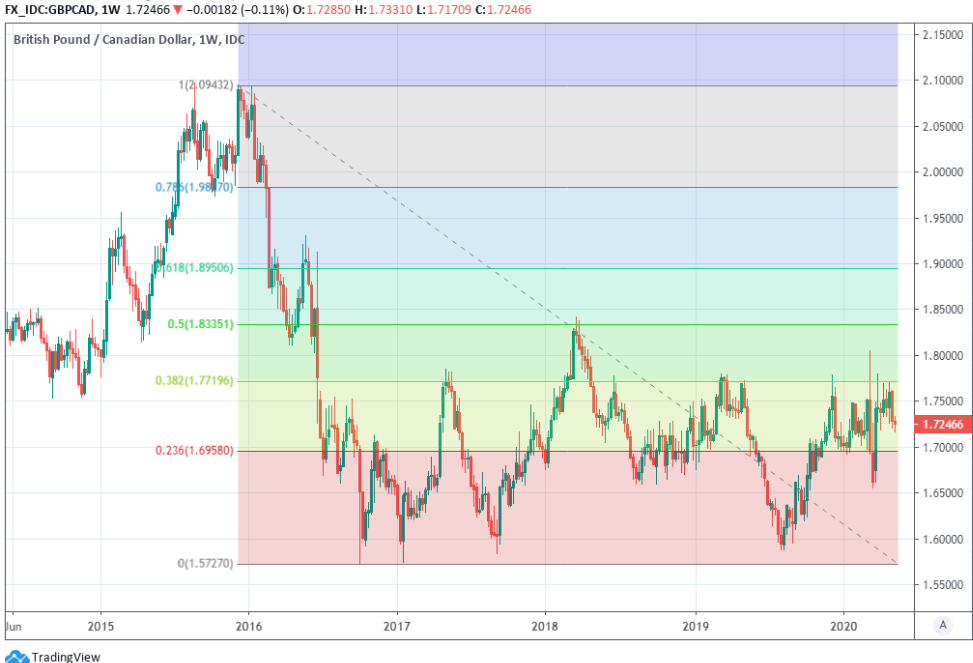 "One of our key concepts for how to navigate the Covid-19 phase in FX markets has been to favour currencies of countries with relatively robust fiscal profiles over those with obvious vulnerabilities. In G10 space, this has led us to prefer owning currencies like CAD, AUD, SEK and NOK (among the procyclical group) as well as JPY and CHF (in the defensive bucket) and conversely being short EUR and especially GBP," Jalinoos says. "Trade talks with the EU have resumed, with a press conference expected on Friday. We remain skeptical that breakthroughs are likely and still see a downside risk asymmetry for GBP."

Companies that cannot shoulder the payroll burden in a coronavirus plagued world might be left with little choice but to make employees redundant, which would risk seeing the unemployment rate climb when it might otherwise be falling and potentially for a while after the coronavirus has been contained. But the scheme is expensive, with some estimates suggesting it could cost as much as £337bn, or 17% of GDP, which would lift the 2020 budget deficit near to 20% of GDP and could take the debt-to-GDP ratio to the brink of 100%.

This is the fiscal rock and economic hard place sandwiching a Pound that already carried the developed world's largest current account deficit as a share of GDP. That sees Sterling rely for a part of its value on continuous capital inflows, which could dry up if investors baulk at the government's perceived largesse. Furthermore, Friday's update from Brexit negotiators now looms on the horizon and the trade talks are three rounds in but have so-far produced nothing more than lamentations of 'limited progress' and allegations from Brussels of less than "best efforts," if not outright bad faith, that could easily prove a noxious mixture for investors and Sterling in the weeks ahead.

"Our 3M view for GBPUSD is 1.22, and we think the pair could re-test levels below 1.20 before the cycle turns. The high concentration of services in UK GDP could dampen the pace of the economic recovery, and we think that COVID-19 has boosted the chances of the UK leaving the Brexit transition period on WTO terms," says Stephen Gallo, BMO's European head of FX strategy. "From the UK government’s perspective, any short-term economic disruption from a “WTO Brexit” will likely be miniscule compared with the shock from COVID-19. Though a rapid UK/EU FTA would be a moderately positive outcome, the UK is unlikely to expect major concessions from Brussels if the latter can’t even provide adequate financial support for its own member states."