- GBP/CAD upside said to be limited after slide back to 1.72.

- Risks to downside as Brexit and lockdown weigh on GBP.

The Pound-Canadian Dollar rate has so-far found strong support at 1.72 but it's emerged from a week-long slide with its upside potential diminished, technical analysts say, and potentially with the gravitational force of the 2020 range floor growing stronger as the outlook for Sterling darkens.

Pound Sterling fell more than 1.7% last week and was still carrying a rolling five-day loss of around 1% on Tuesday as attention turns toward Wednesday's first-quarter GDP data from the UK and Thursday's update on the Brexit trade talks from negotiators. Earlier losses came amid upbeat investor sentiment that lifted global stock markets, commodities and many risk currencies including the Canadian Dollar, which benefited more than some others as oil prices reclaimed the $25 per barrel handle.

The USD/CAD rate has been pulled lower in the risk asset recovery seen over recent weeks although Pound Sterling has not been able to keep pace in the rebound against the big Dollar, which has put the Pound-Canadian rate in retreat from near the top of its 2020 range that was tested again in early May. The Pound-Canadian Dollar rate range spans 1.65-to-1.80 but most price action has taken place between 1.70 and 1.78. 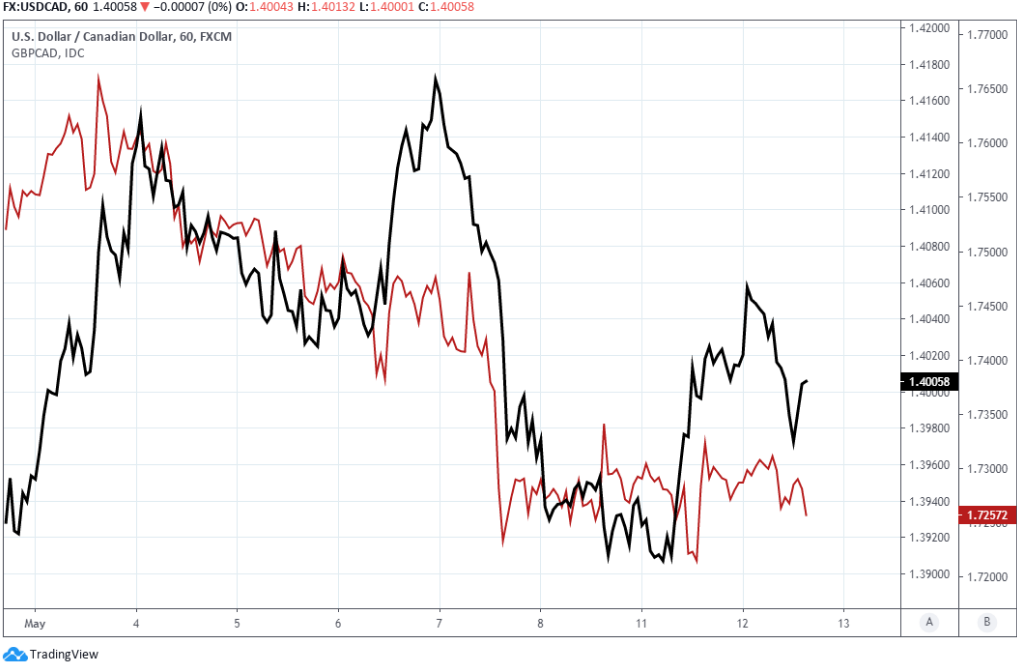 "Weak trend strength is evident here too, although the shorter-term patterns are tilting a bit more GBP-bearish still. We think GBP gains may be limited near-term to the 1.7450/1.7550 area at most. The 1.72 line now represents major support. 1.78 is key resistance," says Juan Manuel Herrera, a strategist at Scotiabank. "USDCAD has settled into a well-defined trading range between support in the mid-1.38s and resistance in the mid-1.42s."

Herrera and the Scotiabank team say the USD/CAD rate could recover the initiative and test the 1.4150 level over the coming days but that the broader trend favours a continuation to the downside over a mutli-week timeframe. This is important for the GBP/CAD outlook because this exchange rate always closely matches the sum of GBP/USD over CAD/USD and if the USD/CAD rate is to fall without offsetting gains in GBP/USD, the Pound-Canadian Dollar rate could find itself under pressure.

Any USD/CAD rebound up to 1.4150 might enable the Pound-Canadian Dollar rate to leave the 1.72 support intact over the coming days but an eventual resumption of the broader downtrend would risk pushing Sterling toward the bottom of its 2020 range if not accompanied by simultaneous gains for GBP/USD. However, the prospect of a GBP/USD rally are diminishing with each day that the UK remains in 'lockdown' while others reopen, and with every claim of only "limited progress" in Brexit trade talks. 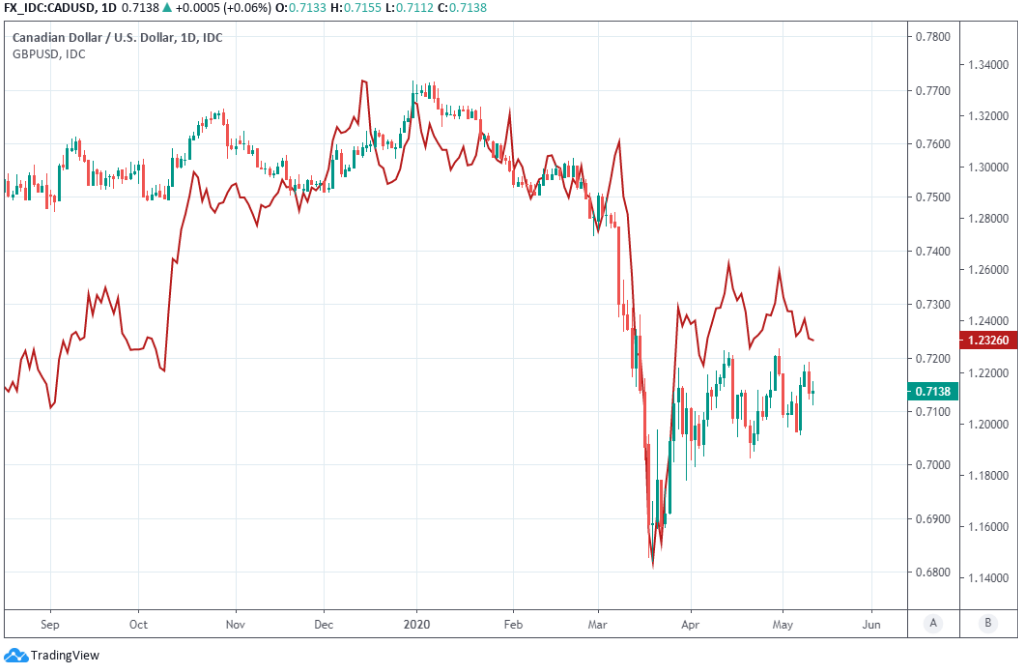 "The UK government had already come under fire for being slow to order the lockdown in March, for a lack of testing and for poor handling of the procurement of PPE. For GBP investors the fact that no real progress was made in the latest post-Brexit talks between the UK and the EU is also a concern given that the end of the transition phase is looming. Additionally, no positive headlines have emerged from the US/UK trade talks either. The UK government desperately need some positive press from these talks to strengthen its non-EU trade ties. However, the UK consumer has been pommelled by scaremongering suggesting a trade deal with the US could open the UK to lower agricultural standards and to higher drug prices for the NHS," says Jane Foley, a senior FX strategist at Rabobank. "We would favour selling rallies in cable towards a move down to GBP/USD1.19 into the summer."

Pound Sterling faces the prospect of becoming the 'sick man of Europe' if-not the world after the government extended the national 'lockdown' into June this weekend and said some sectors of the economy would not be able to reopen until July at the very earliest, as all other major economies in Europe, North America and the antipodes take steps back toward normality. This is as the Office for National Statistics prepares to disclose its first estimate the damage done to the economy by the coronavirus in the first quarter on Wednesday, although that period marked only the beginning of the destruction.

Consensus is for the economy to have shrank -2.3% in the first quarter and -7.5% in March despite the UK not entering lockdown until the final week of March. But the economy was already weak before the coronavirus came along and with economists previously too optimistic about the size of the contraction in the U.S., which was even later to lockdown, the danger is that this week's numbers are even worse than many imagined. 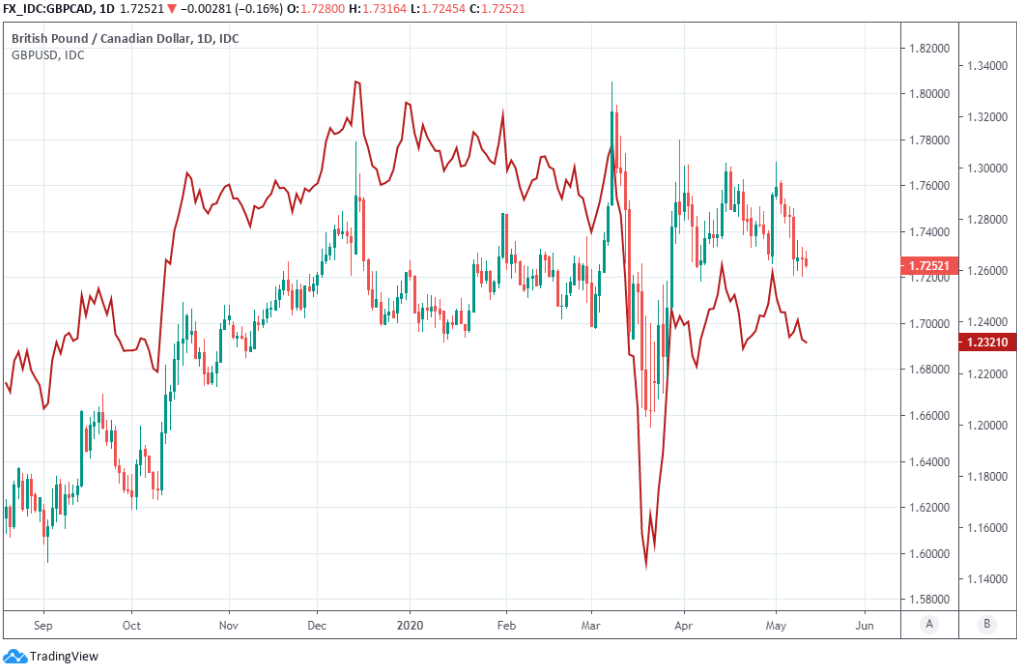 "We continue to expect the pair to remain very well anchored, with the 1.2550/1.2650 range recently becoming a more formidable layer of resistance," says Stephen Gallo, European head of FX strategy at BMO Capital Markets, of the GBP/USD rate. "Our preference is to sell rallies. Crunch time in the UK/EU Brexit talks is already here, and the significant share of services in UK GDP could well be an important drag on the recovery."

There is little end in sight to the UK 'lockdown' and a Brexit deadline is now approaching while trade talks with the EU have produced nothing more than lamentations of 'limited progress' and allegations from Brussels of less than "best efforts," if not outright bad faith, that could easily prove a noxious mixture currency markets in the weeks ahead. Brexit negotiators will update citizens and the market on Friday about the latest round of negotiations, which come with around six weeks to go before the end-June deadline for the UK to request an extension of the transition period or risk market fears over a relationship governed by World Trade Organization terms from 2021.

The Brexit talks are three rounds in and have stalled after opening gambits saw Brussels play immediately for an extension of the 'transition period' while Westminster insisted the whole thing be an affair between two sovereign equals. The British refused the extension and the Europeans scoffed at London's own take on a 'level playing field,' but both have just weeks to extend an end-June deadline for agreeing a transition extension. 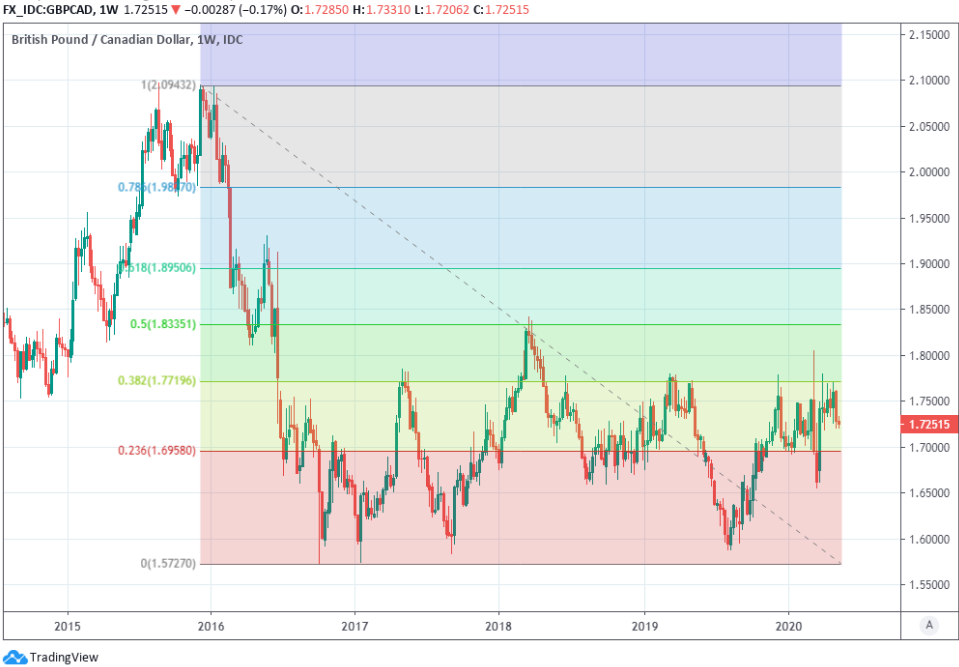 "The UK government still appears determined not to extend the transition period. As this is likely to remain a drag on GBP ahead of the end-June deadline (for the transition period extension request), the speculative community is adding to GBP shorts, and is likely to continue doing so," says Francesco Pesole, a strategist at ING. "The residual effect of oil market turmoil has continued to dent CAD sentiment, which moved deeper into oversold territory (-27% of open interest). For the first time since early 2019, CAD net shorts exceed those of AUD. This is largely a function of how the AUD is sheltered from the oil prices troubles, but also of the other relatively strong fundamentals that have made it the favourite currency to play the rebound in risk sentiment."

European Trade Commissioner Phil Hogan said last week he believes UK negotiators have little intention of striking a Brexit trade deal and every intention of blaming the coronavirus for any damage caused to the economy should an 'Australia deal' Brexit, the same as a 'no deal Brexit', play out at year-end. If true and continued such a negotiating strategy would risk seeing investors fret again about the prospect of a 'no deal' Brexit playing out from year-end. The last time investors considered that a genuine likelihood the Pound-Canadian Dollar rate was sold heavily and subsequently found trading below 1.60.

Even in the Sterling-favourable scenario where USD/CAD rises to 1.4150, the Pound-Canadian Dollar rate would still be facing a trip back down to and then below the short-term technical support flagged by Scotiabank in the event that GBP/USD declines to 1.20, as many and increasing numbers of analysts are suggesting that it could. Meanwhile, a Sterling-adverse scenario where USD/CAD falls to 1.39 while GBP/USD hits 1.20 would produce a Pound-Canadian Dollar rate of 1.6680, taking it back to the floor of the 2020 range and to levels not seen outside of crises.

"We have some sympathy with the view that progress between the UK and US towards a new FTA can offset a portion of downside GBPUSD risks stemming a WTO Brexit. However, we still do not believe an abrupt and complete end to UK/EU discussions is fully discounted by FX investors," says BMO's Gallo.

The rates referenced above would only be available at interbank level, with rates quoted to retail and SME participants likely much lower. Specialist payments firms can help squash the spread between interbank and retail rates.