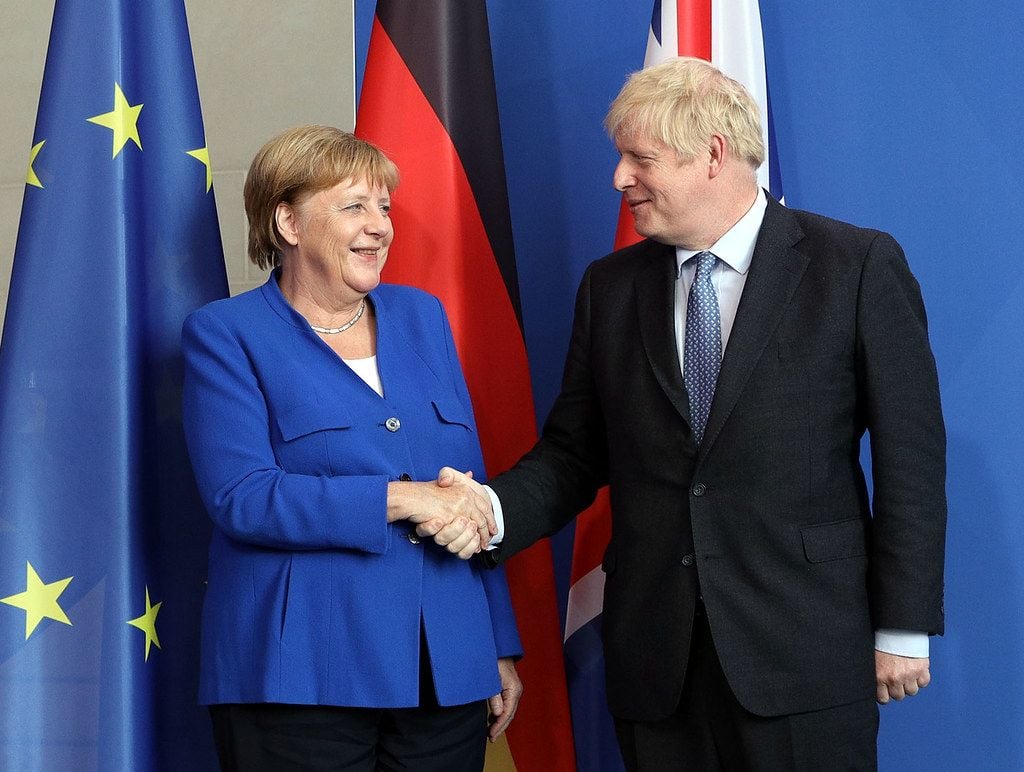 The Pound-to-Euro exchange rate has attempted to extend its April recovery into month-end but appears to have stalled by a notable technical barrier, while enthusiasm for Sterling in general has been potentially kiboshed by Brexit-related hedging flows according to analysts at global investment bank Société Générale.

Sterling has risen alongside other 'risk on' currencies since mid-March as investors celebrated moves by major economies to ease restrictions on daily life, encouraging hopes of a quick recovery from the historic depths of contraction likely to have been plumbed by many amid the current crisis. But recent days has seen the Pound-Euro rate stall just below 1.15.

The exchange rate has over the past 24 hours been testing multi-week highs, but "I'm not sure I want to chase this one, though,” says Kit Juckes, chief FX strategist at Societe Generale in a Tuesday research note.

"If all the nervous clients in my inbox heave a sigh of relief and hedge Sterling exposure between here and our fair value estimate of EUR/GBP 0.85 (GBP/EUR 1.1765), it will be hard for the Pound to rally much. Sterling's at best stuck in a tight range, at worst vulnerable to a fresh bout of nerves in due course."

Juckes' clients are concerned about the prospect of further steep losses in the Pound-Euro rate, like those seen in summer of 2019 when Prime Minister Boris Johnson was coveting the Conservative Party leadership and the keys to 10 Downing Street.

The rub for the Pound however, is that if those clients seek to protect themselves from such losses they could make a self-fulfilling prophecy of them because "hedging" the downside in the GBP/EUR rate often involves selling that exchange rate. 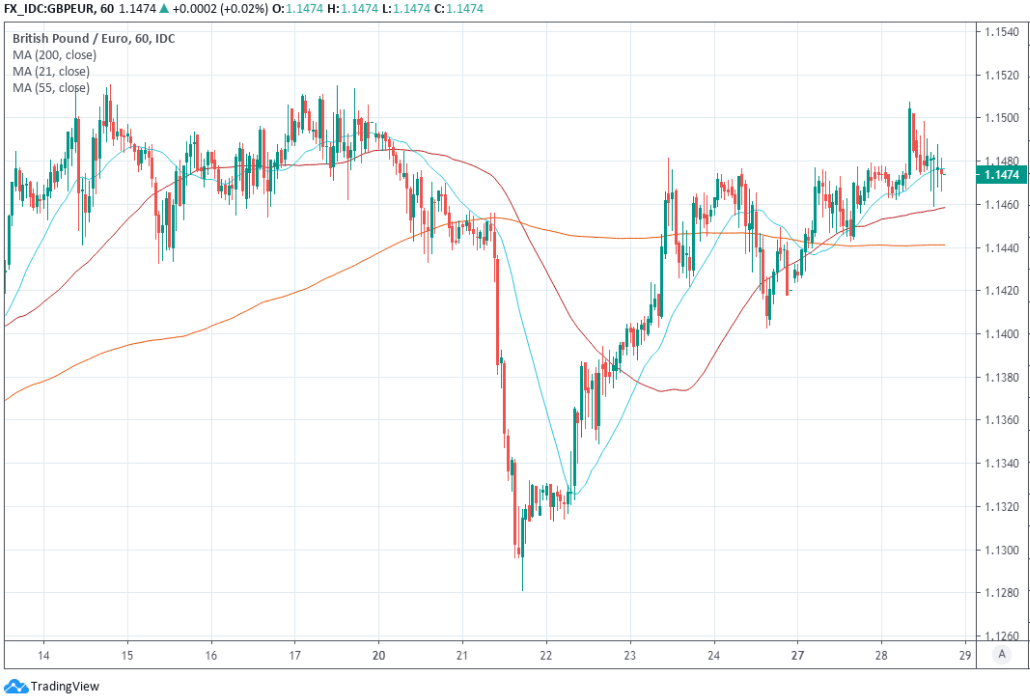 Concerns are rising after Brexit talks yielded only "limited progress" toward a future relationship agreement in the first round of negotiations since the onset of the coronavirus crisis. There are less than nine weeks to go until the deadline for the UK to request an extension of the transition period so that it runs beyond December 31 but statements made by negotiators Michel Barnier and David Frost appear to have stoked now-familiar feelings of unease among internationally trading companies.

“The UK negotiators keep repeating that we are negotiating as sovereign equals. As sovereigns, each side must be able to decide, with full sovereignty, on the conditions of access to our respective markets. That's fine. But the reality of this negotiation is to find the best possible relationship between a market of 66 million consumers on one side of the Channel and a market of 450 million consumers on the other,” says Michel Barnier, in a press conference following negotiations ending on Friday April 24.

The EU has thus far in the Brexit process refused to recognise the UK as a "sovereign equal" and is instead pursuing a relationship that would make itself a de facto probation officer to the post-Brexit economy and country, placing Prime Minister Boris Johnson between a rock and a hard place. Negotiators have had two rounds of talks in total since the UK made a technical exit from the EU in January, wtih limited progress arising from the two respective sets of incompatible objectives that are in play.

Among other things Barnier said "there will be no ambitious trade deal without an ambitious level playing field on open and fair competition," citing the close proximity of the UK to the EU before saying; "the UK this week failed to engage substantially on these topics." This is the language of the EU demand that the UK accept Brussels' rulebook on "social and environmental standards," and laws that at least purport to be about "preventing unfair trade distortions and unjustified competitive advantages, for instance on state aid and relevant tax measures." 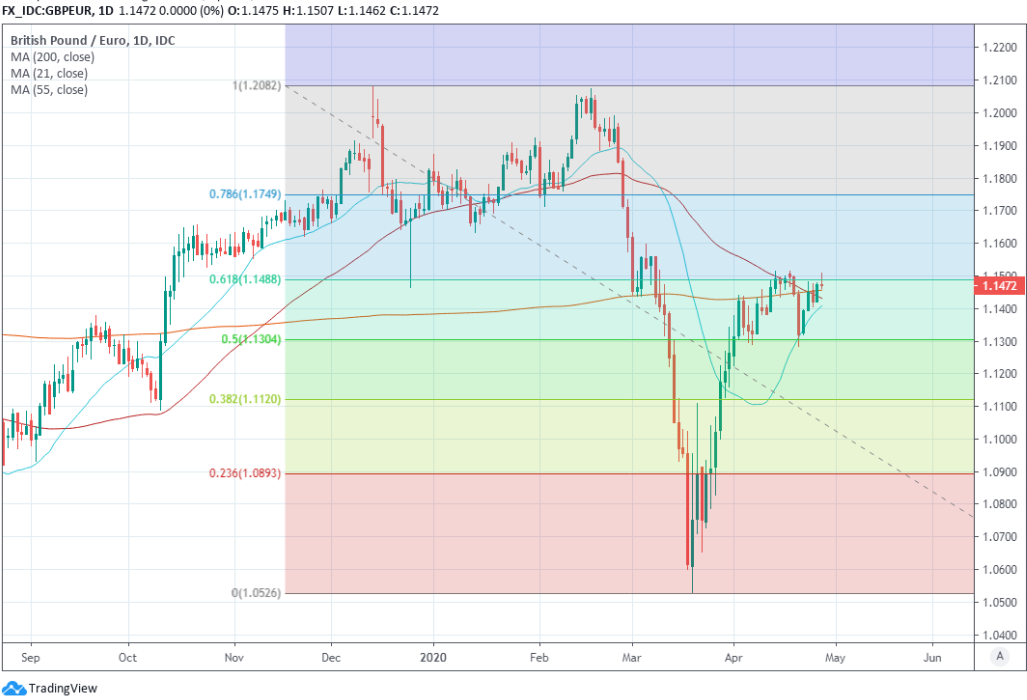 Above: Pound-Euro rate shown at daily intervals with Fibonacci retracements of 2020 downtrend.

"We find that distance matters almost as much for services as it does for goods. We show that zero-tariff trade is not friction-free trade, because non-tariff barriers play an important role in trade intensity. And we argue that even a deep UK-US trade deal is unlikely to compensate for a thin free trade agreement between the UK and the EU," says Zach Pandl, global co-head of foreign exchange strategy at Goldman Sachs in a February research briefing. "We would caution against using economic arguments to predict the outcome of Brexit negotiations. In our view, for this government, rewriting the UK’s relationship with the EU is as much a matter of reclaiming sovereignty as it is an exercise in maximising prosperity."

The reality for both economies, currencies and the many peoples involved is that the EU is seeking to retain its authority and even expand its 'competence' into new areas (tax) at a time when the Prime Minister is seeking to end that authority and has little interest in allowing the EU to have 'competence' in any field of UK policymaking. These incompatible objectives, and a large Conservative Party majority in parliament, could make something like a 'no deal' Brexit at year-end much more likely.

As a minimum, a ‘no deal’ Brexit from the transition period on December 31 will lead to activation of the ‘backstop’ or Northern Irish protocol with constitutional implications that could eventually have political consequences. Then there’s the impact that tariffs could have on the coronavirus-battered economy, which many economists and analysts have said will cause economic pain in the short-term and lead to slower growth over the longer-term than would otherwise be the case.

"There are two reasons why a "WTO Brexit" in some form or another is looking more likely. The first reason is that the UK government needs all the flexibility it can get and, let's face it, EU membership and the term "flexibility" are not exactly synonymous with one another. The second reason is that, in the current economic climate, most countries will want to continue trading with the UK with or without a free trade agreement in place, says Stephen Gallo, European head of FX strategy at BMO Capital Markets. "We would not be surprised if Brussels initially made it more difficult for the UK to sell its goods and services into the EU-27 after the transition period ends." 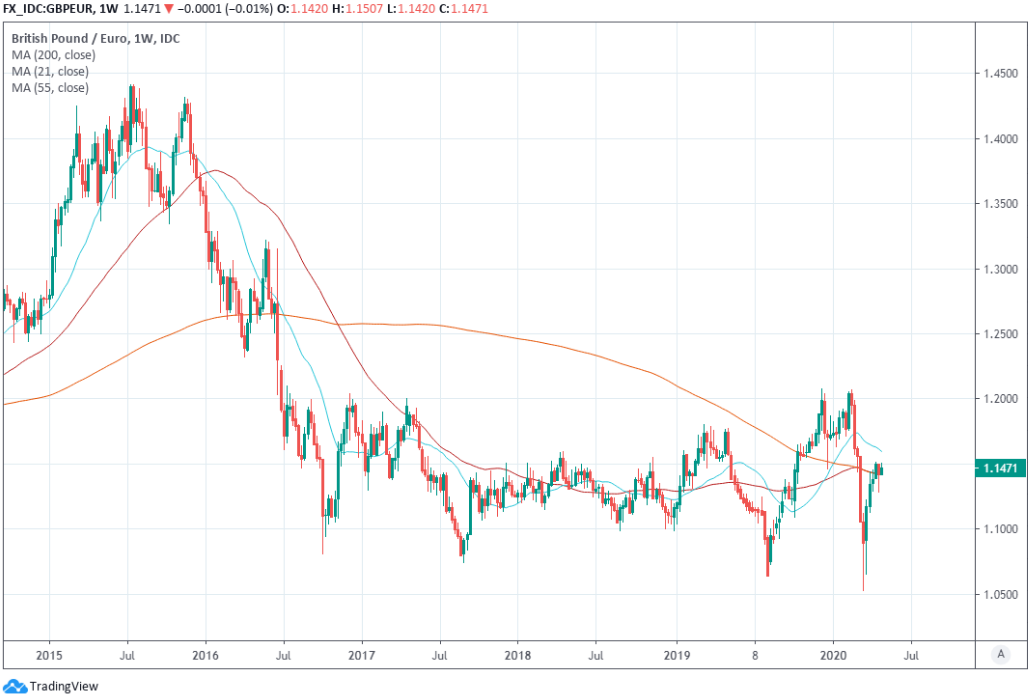 Above: Pound-Euro rate shown at weekly intervals with selected moving-averages.

'No deal' Brexit effects might even be tempered in the post-coronavirus world if the pandemic does as some economists fear and leads to a general rise in 'protectionism' - tariffs imposed by countries on goods imported from other countries in order to protect domestic producers from competition. Such a post-coronavirus world might lessen the extent to which the UK falls from favour as a prospective market and investment destination because it would to some extent reduce other countries to the UK's new level.

Societe Generale's Juckes says the best the Pound-Euro rate can hope for in these circumstances is a "a tight range" and at worst "a fresh bout of nerves."

The economic consequences of any WTO Brexit will also arguably pale into insignificance when stood next to historic damage done by the coronavirus crisis, although, and in any case, the Pound has never liked the look or sound of Brexit and the last time that concerns about the future relationship with the EU really asserted themselves on the currency it spent the summer of 2019 trading between 1.06 and 1.10.

It's been testing the 1.15 handle through much of April.

Technical analysts at Commerzbank, have meanwhile been warning of late about the prospect of big falls in Sterling against the Euro ahead, with a three-month outlook suggesting the Pound-Euro rate could return to its 2008 financial crisis lows.

"EUR/GBP continues to oscillate around the 200 day ma at 0.8733 and is to further range trade above the current April low at 0.8681. While it holds we remain neutral. Above resistance at 0.8864/65 sits the March 20 low at 0.8994," says Axel Rudolph, a senior technical analyst at Commerzbank. "A drop and daily chart close below the 0.8681 current April low would negate our medium-term forecast." 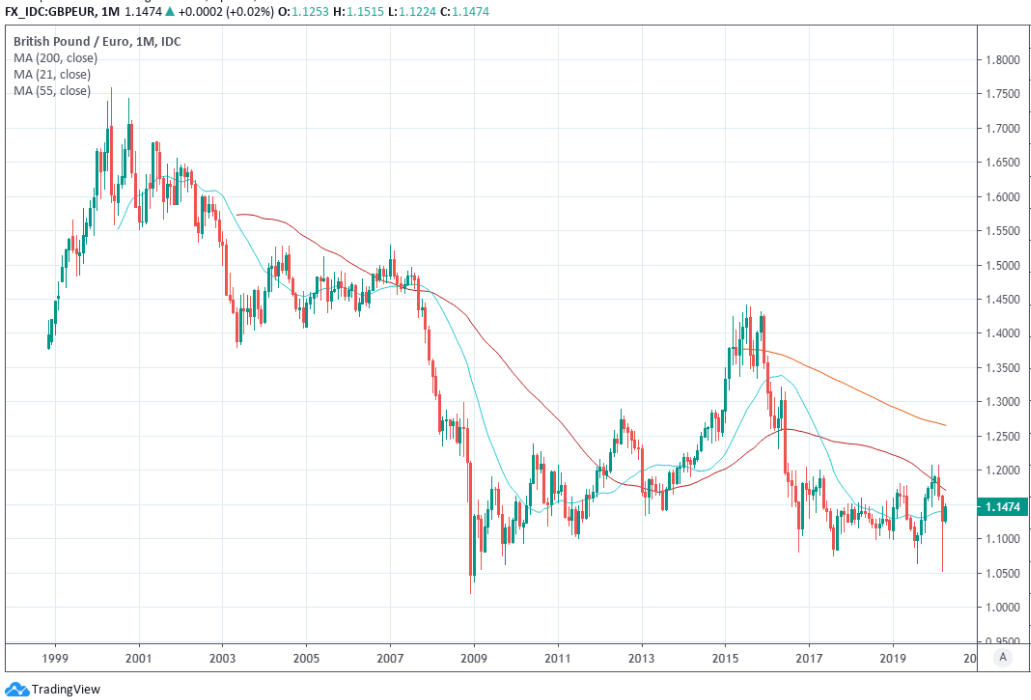 Above: Pound-Euro rate shown at monthly intervals with selected moving-averages.