- As Brexit headwinds return and downside risks build for the GBP.

The Pound-Dollar rate was handing back earlier gains Wednesday and is comfortably the developed world underperformer this month, although it's also now caught between a fiscal rock and an economic hard place at a time when downside risks are building for the British currency.

Sterling played catch-up through much of Wednesday as investors dumped the Dollar and bought bonds while taking a more discerning approach to stoke markets, which saw the Pound-Dollar rate rise almost half a percent to trade back above the 1.23 handle. Gains came even as 2-year British government bond yields spent their second day trading beneath zero percent after the UK joined France and Germany in the negative yield club on Tuesday.

The Pound did reverse course however, after Federal Reserve (Fed) Chairman Jerome Powell neglected to give the market the fuel it was looking to throw onto the fires of speculation about a possible later shift toward negative benchmark interest rates in the U.S. Some had expected him to remark on the idea of using negative rates in an address to the Peterson Institute for International Economics but Powell gave no airtime in prepared remarks to a policy option the Fed has typically shown little interest in exploring. He later argued against negative rates as a policy tool but did not completely rule out the idea that one day they might become appropriate.

"Our view is that even if the Fed eventually pushes towards negative rates, its USD-negative repercussions may be limited by the fact that most other major central banks will also be toying with negative rates and QE policies. Instead, we prefer GBP as our core G10 short," says Shahab Jalinoos, head of FX strategy at Credit Suisse. "With GBP having rallied excessively in our view throughout April, the entry levels for new shorts against the pro-cyclical currencies mentioned above were attractive at the start of May and remain far from prohibitive even now when taking a medium-term view." 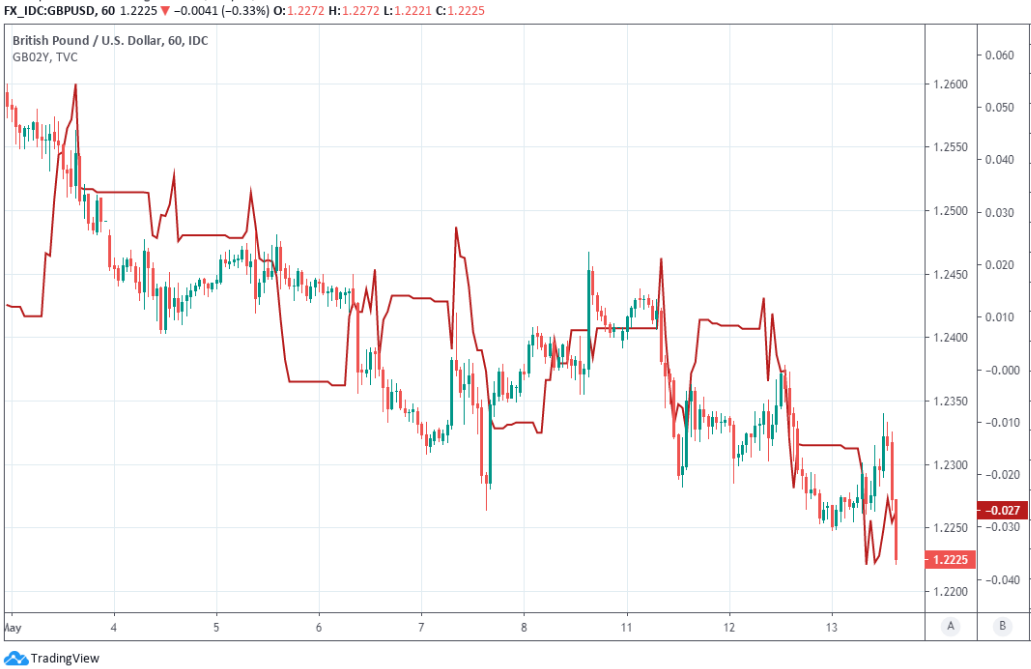 Wednesday's foray back above 1.23 was a short-lived affair although further losses and even lower levels may be just around the corner given the fiscal rock and economic hard place the British currency is now trapped between, as well as the prospect of imminent Brexit-related headwinds.

Chancellor Rishi Sunak extended on Tuesday the scheme that sees the government pay 80% of salaries for 7.5 million people, so that it now runs into October. But where he gave with one hand, he also took with another.

The government will continue to pay a substantial share of wages for struggling firms but will also ask them to cough up a progressively larger share of the bill from July, at a point when some of the those companies will have earned little if-any revenue since late March. Companies that cannot shoulder the burden might be left with little choice but to make employees redundant, which would risk seeing the unemployment rate climb when it might otherwise be falling and potentially for a while after the coronavirus has been contained.

Sunak's announcement came before the Office of National Statistics released its first estimate of GDP in the first quarter, which revealed the largest economic contraction since the financial crisis although the data mark only the very beginning of the downturn and drastically understate the size of the likely second-quarter fall in output. Capital Economics and Pantheon Macroeconomics see large double-digit declines arising from this quarter while Goldman Sachs highlighted Wednesday its forecast of a -10% 2020 contraction.

"While the additional support for employment is welcome the cost could quickly start to weigh on investor sentiment especially if 2nd COVID waves emerge going forward," says Derek Halpenny, head of research, global markets EMEA and international securities at MUFG. "The pound is the clear under-performer this month – down 2.4% versus the dollar, the worst performance in the G10 space. This may well reflect the fact that the UK COVID problem is worse than elsewhere and hence costs could be considerably higher. We maintain our near-term bearish view on the pound." 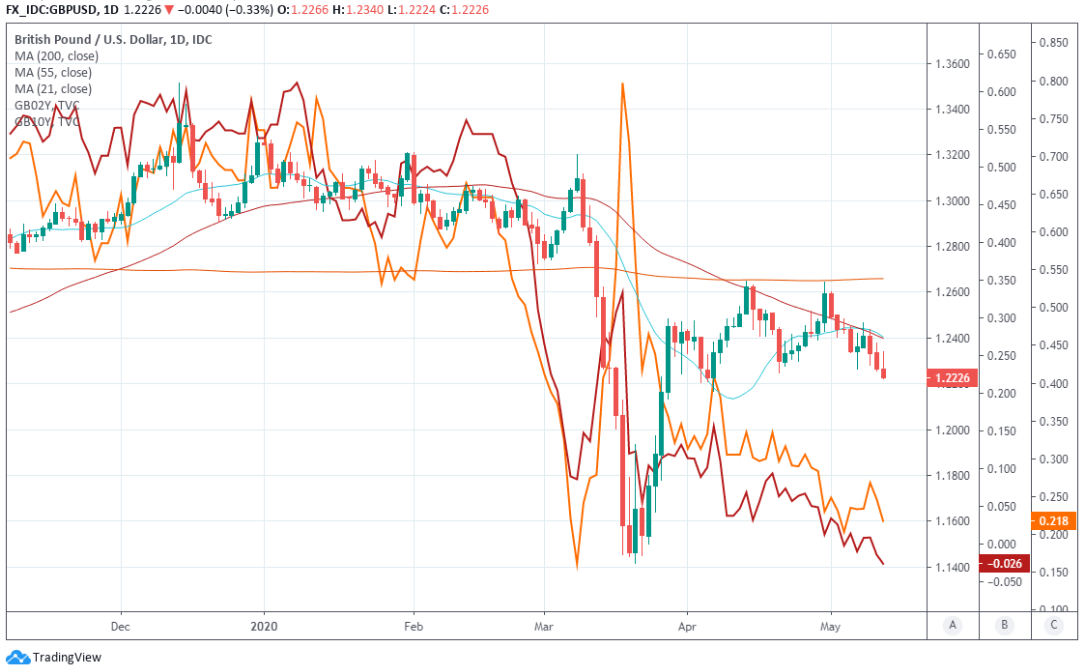 The FT reported Tuesday that government support for the economy could cost £337bn, or 17% of GDP, while The Telegraph reported £300bn on Wednesday. This kind of figure would lift the 2020 budget deficit near to 20% of GDP and could take the debt-to-GDP ratio to the brink of 100%, while both MUFG and Credit Suisse have cited the unaffordability of ongoing support to the economy as a key factor in their bearish views on the Pound.

But the government has also extended the national 'lockdown' into June and said it could be July at the very earliest before some parts of the economy are able to reopen. This is assuming that all sectors would reopen if actually asked, although it's not clear they would. In other words, it could be months before a large portion of the economy and labour force are taken off the sidelines. Meanwhile, every withdrawal of government support will leave the economy with another open wound to nurse.

That's the fiscal rock and economic hard place the Pound is now caught between, as European, North American and antipodean countries take steps back toward normality through the progressive easing of restrictions on daily life. In most cases those countries contracted the virus before the UK and were quicker to enter take action against it.

"We note that trade talks with the EU have resumed, with a press conference expected on Friday. We remain skeptical that breakthroughs are likely and still see a downside risk asymmetry for GBP. As discussed, GBPUSD 1.20 has been a long-held view but a similar bearish expression is possible using non-USD fiscally robust alternatives such as Scandies, AUD or CAD – without having to take an outright “risk off” posture by using JPY or CHF as the long side," Jalinoos writes in a research note. 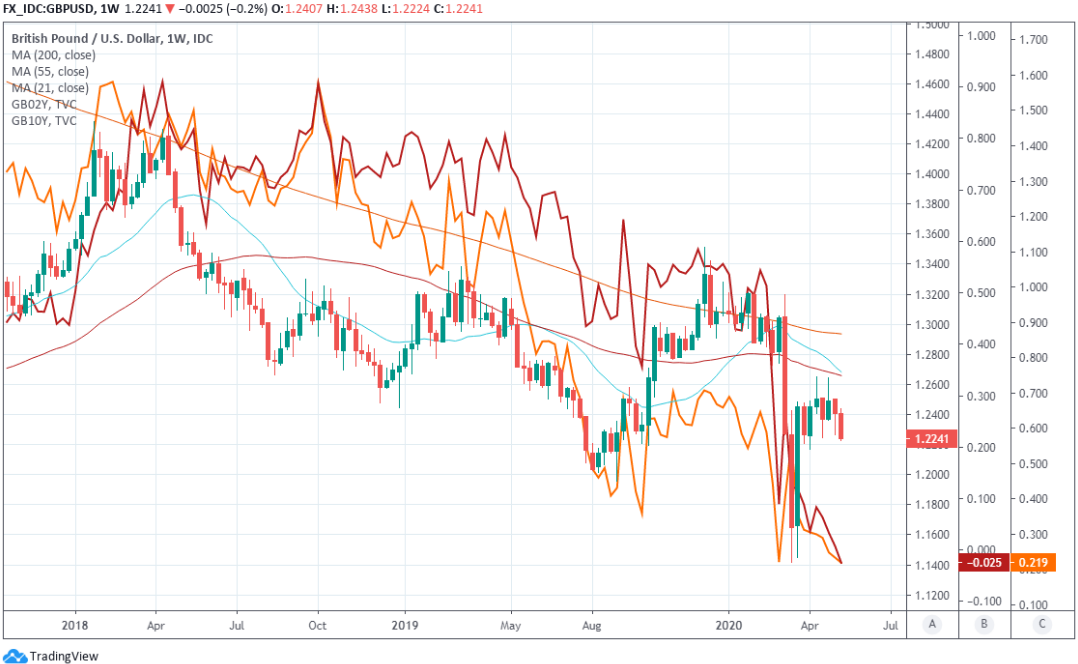 Credit Suisse has advocated that clients buy currencies backed by governments that have the soundest of finances and sell those which are backed only by bloated balance sheets. Pound Sterling is at the bottom of the board and the bank's preferred 'short' while the Australian and Canadian Dollars are firm favourites. Those latter currencies have not only robust balance sheets but also a high sensitivity to the commodity prices that are widely expected to rise as the rest of the developed world economy continues to exit 'lockdown.'

But financial-economic headwinds are just one side of the 2020 Pound Sterling coin because Brexit is rapidly re-entering the picture too, as Friday's press conference looms on the horizon. Brexit trade talks are three rounds in and have so-far produced nothing more than lamentations of 'limited progress' and allegations from Brussels of less than "best efforts," if not outright bad faith, that could easily prove a noxious mixture for investors in the weeks ahead.

"We would argue that the majority of today's UK economic data bolsters the bearish case for the GBP vs the USD," says Stephen Gallo, European head of FX strategy at BMO Capital Markets. "We continue to expect the pair to remain very well anchored, with the 1.2550/1.2650 range recently becoming a more formidable layer of resistance. Our preference is to sell rallies. Crunch time in the UK/EU Brexit talks is already here."

The official deadline for the UK and EU to agree future preferential trade relations or default to a relationship governed by World Trade Organization terms is December 31, although arguably the real deadline is currently June 30 because Prime Minister Boris Johnson has previously said he could walk away from the talks if the substantial body of a deal is not in shape before then although this is also the deadline for when the UK must request an extension of the transition period if such thing is likely to be needed. Absent a request for an extension, which the government says it won't make, the market could begin to fret about something like a 'no deal' Brexit again. 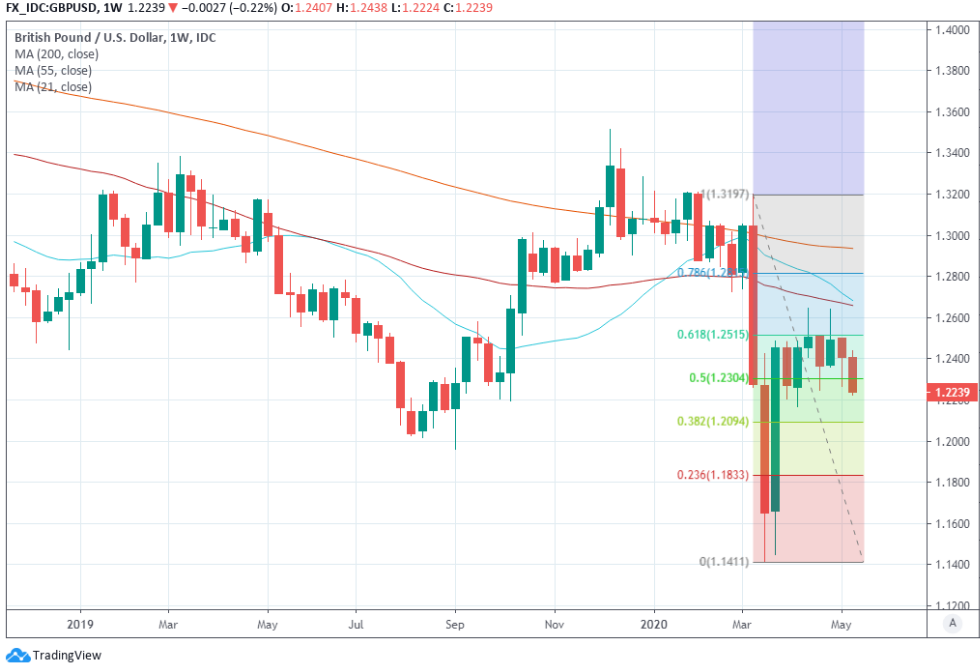 Above: Pound-Dollar rate roadblocked by 61.8% Fibonacci retracement of 2020 fall on weekly chart.

Trade talks have stalled after opening gambits saw Brussels play immediately for an extension of the 'transition period' while Westminster insisted the whole thing be an affair between two sovereign equals. London refused the extension and Brussels scoffed at Westminster's own take on a 'level playing field,' but both have just weeks to extend the end-June deadline or risk fresh losses for Sterling. BMO's Gallo says this isn't in the price and remains a seller of the Pound-Dollar rate, although others agree too.

"With the end-June deadline fast approaching, we think GBP could be in for a rough period ahead. Importantly, we see little evidence these concerns are in the price at this stage, especially as a "constructive clash" between the EU and UK may be imminent. We are short GBPUSD and GBPJPY in our model portfolio and do not think it is too late to enter or add to these positions. In addition, we also think GBP shorts against CHF are also appealing for those looking to diversify bearish GBP exposures," says Ned Rumpeltin, European head of FX strategy at TD Securities. "We are already short cable in our model portfolio with an initial target of 1.1850."

The last time that Brexit concerns truly weighed on Sterling they took the Pound-Dollar rate below the 1.20 threshold, which is a level that's already been broken again amid the bearish price action of 2020 and one that is now key to whether the British currency revisits the multi-decade lows seen back in March. The Pound-Dollar rate fell to 1.1409 in March, its lowest since 1985.

Some technical analysts have warned for weeks about the prospect of another big lurch lower and the potential for a fresh mutli-decade low to be set in the months ahead. Commerzbank analysts Karen Jones and Axel Rudolph are sellers of the Pound-Dollar rate from 1.2369 and 1.24 while targeting 1.21 in the short-term, although they also forecast 1.0463 to be seen over a three-month horizon. That's more than 14% below Wednesday's market price.