- But worse outcome in pipeline with entire Q2 spent in 'lockdown'.

- Virus shutdown thought to close off one quarter of UK economy.

The UK economy experienced a record breaking slump at the end of the first-quarter as the effort to contain the coronavirus closed down what is thought to be around a quarter of its production capacity, although the steepest falls in output are expected in the second quarter.

GDP fell by -2% in the first quarter after the economy already ground to a standstill at the end of last year, although the decline was less than the -7.9% fall envisaged by the consensus. This was after output slumped -5.8% in March following the first week of the coronavirus 'lockdown.'

All sectors of the economy saw output contract last quarter except for the government sector, with production from the services sector falling by -1.9%, while the industrial sector saw output decline by and construction fell by -2.6%.

"Given that the economy was growing a quarterly rate of about 0.1% before the lockdown, today’s release therefore implies that economic activity after the lockdown was imposed on 23rd March was down a whopping 21%. That suggests our forecast for a 20% m/m or so contraction in GDP in April is about right and a 25% fall in total peak to trough. Admittedly, the gradual lifting of containment measures suggest that April will probably prove to be the low point," says Ruth Gregory at Capital Economics. 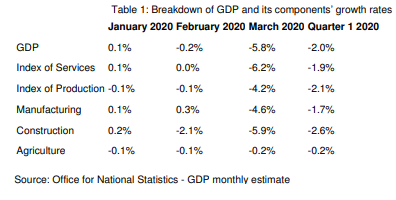 Above: Quarterly growth rates for UK GDP and various sectors of economy. Office for National Statistics.

The UK entered a form of 'lockdown' on March 23 after pubs, restaurants, hospitality businesses and other supposed non-essential sectors of the economy were instructed to shut by the government as it awoke to the threat posed to human health and the public services by the coronavirus. This was at a point when the UK had just 6,653 confirmed cases of the coronavirus, although also at a time when the daily increase in that number was beginning to rise.

Some 967 new coronavirus infections were reported on March 23 but within the space of a week the daily number had risen to 2,619, with even larger figures following on. This was two-to-three weeks after the UK first began to detect unexplained cases of the pneumonia inducing disease between March 11 and March 12, when the number of total confirmed infections rose from 77 imported cases to 130. The UK had 226,463 confirmed cases by the time GDP data was released on Wednesday and had the government had disclosed some 32,692 deaths, leaving the country with the highest official death rate in the world.

Measures implemented to contain the virus have brought vast swathes of the country to a standstill and in the process frustrated the usual pattern of spending and consumption for many millions, dealing a heavy blow to the economy in the processs. A blow that's expected to grow larger in the second quarter.

GDP reflects the sum total of private consumption, government spending, investment from both the public and private sectors and net exports, but can otherwise be thought of as the sum total of spending within an economy less the value of imported goods, which are a subtraction in the calculation of GDP.

"GDP probably fell by about a further 15% month-to-month in April. But we’re still bracing for a bigger fall, given that some building sites initially stayed open at the start of the lockdown, before shutting completely in April, and retail sales were propped up in March by consumers stockpiling food," says Samuel Tombs, chief UK economist at Pantheon Macroeconomics. 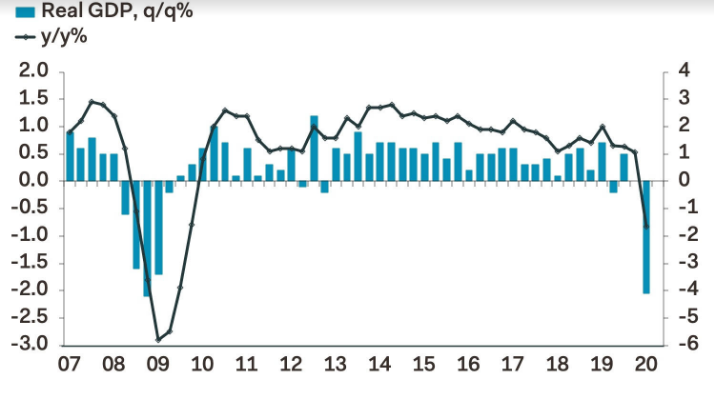 Above: Quarterly changes in real GDP for the UK. Source: Pantheon Macroeconomics.

Economists at Pantheon Macroeconomics and Capital Economics say the national shutdown could cost around a fifth of output the entire time it goes on, just days after Prime Minister Boris Johnson set out plans to ease restrictions on activity at only the most gradual of paces.

Johnson encouraged those who're unable to work from home to return to work this week, though many had never been instructed to stop going to work in the first place, but has otherwise delayed the reopening of the economy until June when the government hopes that some children will return to schools and shops reopen. However, some parts of the economy will remain closed until July at the very earliest, notably the pub, coffee shop, restaurant and hospitality trades.

"We now expect the current containment measures to remain in place for longer, especially given further delays to the government’s announcement of any substantive plans for exit. As a result, we think economic activity through most of May is likely to remain depressed, weighing yet more heavily on Q2 GDP growth under our assumptions. Through 2020 as a whole, we now expect UK GDP to contract by 10%," says Soeren Radde, an economist at Goldman Sachs.

The number of new coronavirus infections declared on a daily basis has been falling since April 10 but remained on Wednesday more than three times the levels being reported at the time when the country and economy went into 'lockdown'. There were 3,403 new infections reported on Tuesday.

Affected sectors of the economy have been leaning on HM Treasury for support through publicly guaranteed loans, grants and a furlough scheme that has paid 80% of wages for sidelined workers. The government backstop is estimated to cost something like £300bn, or 15% of pre-crisis annual GDP, which could see the budget deficit approach something like 20% this year if the government estimates are accurate and the spending all comes within one year.

The government has extended its furlough scheme until October but from July will begin asking employers to pay an increasing share of wages from their own pockets, before it's clear that life or the economy will actually be returning to some semblance of normality and at a time when many companies will have had very little if-any revenue coming in at all. Chancellor Rishi Sunak said he "can't save every job" in an interview with BBC News on Tuesday.