- But is becoming the GBP cross rate with most downside risk.

- As Brexit adds to headwinds weighing on GBP, oil stabilises.

Pound Sterling was left reeling by Friday's update from Brexit negotiators after trade talks achieved only another deadlock between London and Brussels, as a fresh bout of U.S.-China trade tensions weighed broadly on all risk assets except prices quoted in the futures market for oil, Canada's largest export.

The Brexit circus is a significant risk for the Pound while a second edition of the U.S.-China trade war is a threat to the fledgling global economic recovery as well as the oil prices which are, for the time being at least, defying gravity and offering the Canadian Dollar as well as other oil-linked currencies tepid support.

With some Sterling rates nearing key support, there's a chance the Pound-to-Canadian Dollar rate may pause for a breather somewhere around 1.6973, which is the 50% Fibonacci retracement of the August 2019 uptrend and a level that's acted as support before. It's also a threshold that coincides closely with the 1.6962 GBP/CAD rate produced by a GBP/USD that finds support around 1.2030 and a USD/CAD that's hovering around 1.41.

Nonetheless, the robust rebound in the oil market threatens to make the Pound-to-Canadian Dollar rate the Sterling-Dollar-bloc cross rate with the most downside potential, given that it could constrain the upside in USD/CAD at a point when GBP/USD is threatening to plumb new multi-decade lows. The Pound-Canadian Dollar rate is an amalgamation of those two aforementioned exchange rates and will fall further if USD/CAD upside fails to match the downside in GBP/USD, while other commodity currencies like the Aussie and Kiwi Dollars have a greater sensitivity than the Loonie to the Chinese currency. 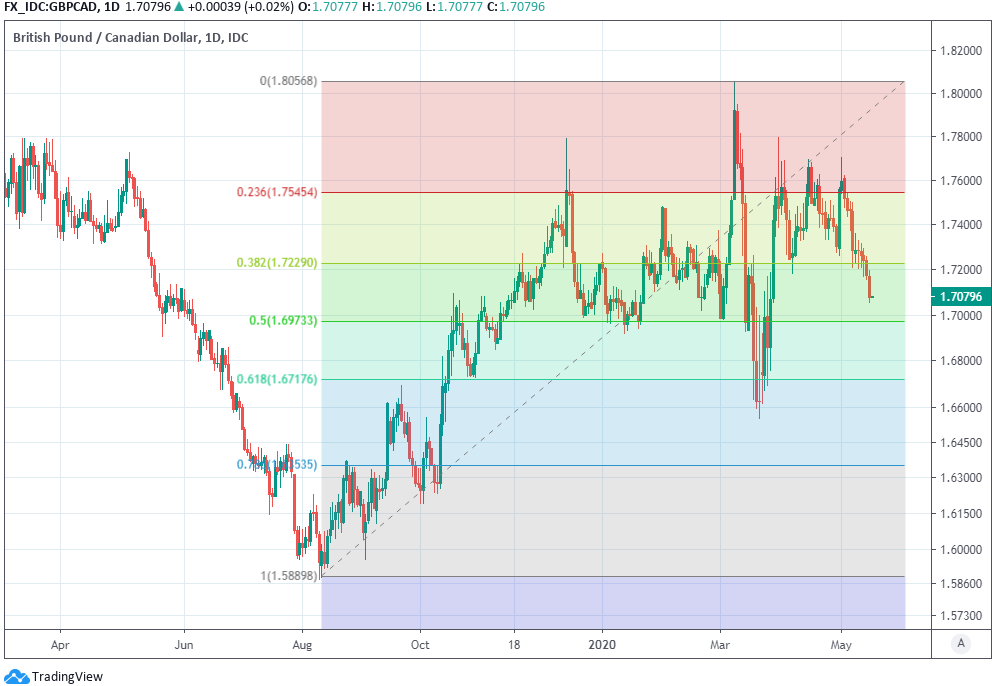 Above: Pound-to-Canadian Dollar rate with Fibonacci retracements of August 2019 uptrend.

"The oil market rebalancing continues to gather speed, driven by both supply and demand improvements which are in fact running slightly ahead of our above consensus expectations since we turned constructive on the oil outlook on May 1. These improvements are taking out the risk of a sharp pull-back in prices although we re-iterate our view that the rebalancing will take time, with prices also capped in the next couple months by both the large inventory overhang as well as the ability for shut-in production in North America to come back-online should prices rally further," says Damien Courvalin, a senior commodities strategist at Goldman Sachs in a research note. "As a result, we believe that the next stage of the oil market rebalancing will be one of range-bound spot prices with the most notable shifts being a decline in implied volatility as well as a continued flattening of the forward curve without long-dated prices rising yet."

WTI crude oil rose more than 10% last week and has climbed 47% in the last month, which is a supportive development for the Loonie even if it has itself been driven more by appetite for the U.S. Dollar than anything else of late. A sustained recovery in oil might lean against an increase in the USD/CAD rate and this would be happening at a time when Sterling is succumbing to a noxious cocktail of fundamental risks that threaten to push it as far as 1.05 against the U.S. Dollar over the coming months.

The market is turning decidedly bearish on the GBP/USD outlook and although only a few see Sterling falling near to parity against the greenback, the British currency is widely expected to fall to 1.2030 ahead of a trip down to 1.18 and many are also eyeing a return to around the 1.15 level. Without countervailing increases in USD/CAD, this would spell substantial downside for the GBP/CAD rate, bringing the 1.6960/70 threshold into view first followed by 1.6624/38 as Sterling hits 1.18 against the greenback while risking a descent into the 1.50-to-1.65 range if the bearish 1.05 and 1.15 GBP/USD forecasts play out without meaningful increases in USD/CAD.

"GBPUSD is poised to weaken—and perhaps in a meaningful way. April/May price action has seen Cable capped right on the 200-day MA twice and the current pressure on the intervening low (1.2252) suggests a double top signal is about to be triggered (implying around 400 ticks of downside potential and putting the GBP on course for a test of the mid 1.18s)," says Juan Manuel Herrera, a strategist at Scotiabank in a Thursday research note. 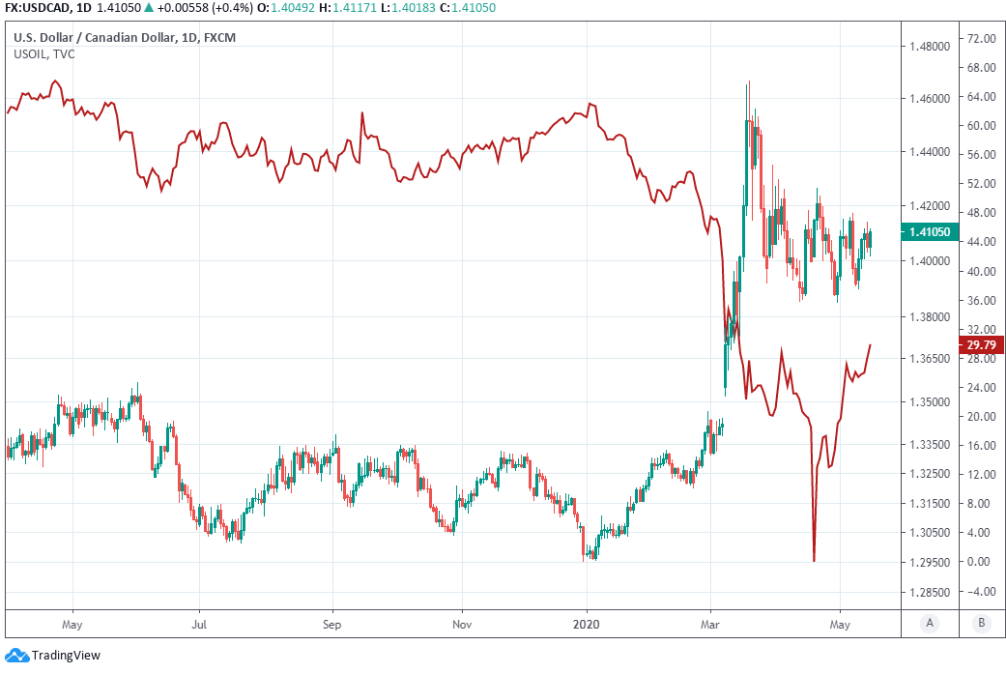 "Given the focus on risk appetite, figuring out the week ahead and what it might bring for the CAD gets a little trickier," says Shaun Osborne, chief FX strategist at Scotiabank. "Technical signals suggest a strong rejection of the March high in USDCAD but little appetite to push USDCAD significantly below 1.40, although broader technical signals (medium term MA and MA crossover studies) are tilted a bit more bearishly for the USD. Technically, there is little reason to expect a move outside of the April/May range of 1.3850/1.4275 for now – dovetailing closely with the fundamentally “modeled” range noted above."

Scotiabank says the economic data due out this week will matter little to currencies and that the broader mood in global markets, which are likely to focus on the fresh outbreak of tensions between the U.S. and China as well as incoming government disclosures on the number of new coronavirus infections in economies that are reopening following 'lockdown' periods aimed at stemming the advance of the pneumonia-inducing disease, will be an important influence..

U.S.-China relations have deteriorated again, with the two sides exchanging harsh words and trade threats late last week, potentially undermining the prospects of a global economic recovery. Both trade tensions and the prospect of a second wave of coronavirus infections in reopening economies can put at risk the fledgling global economic recovery that began with the easing of 'lockdown' measures in Europe and the U.S., which would be bad for risk assets including stocks, Sterling and the Canadian Dollar.

However, what matters most for the Pound-Canadian Dollar rate is which of GBP/USD and USD/CAD moves faster and further. Another trade war might wallop oil prices, which would be bad for the Loonie, but it could also exacerbate the troubles of an already frail Pound Sterling. 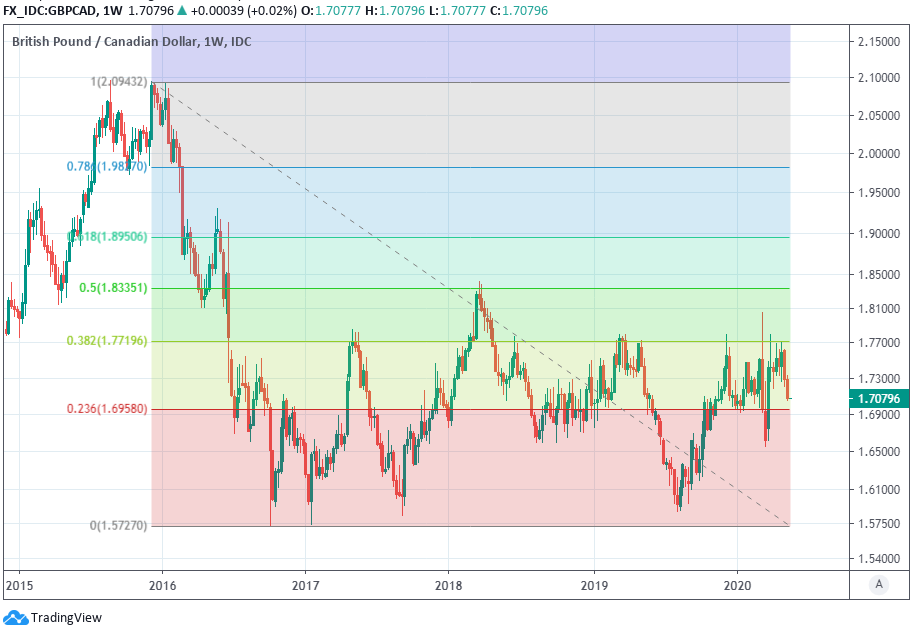