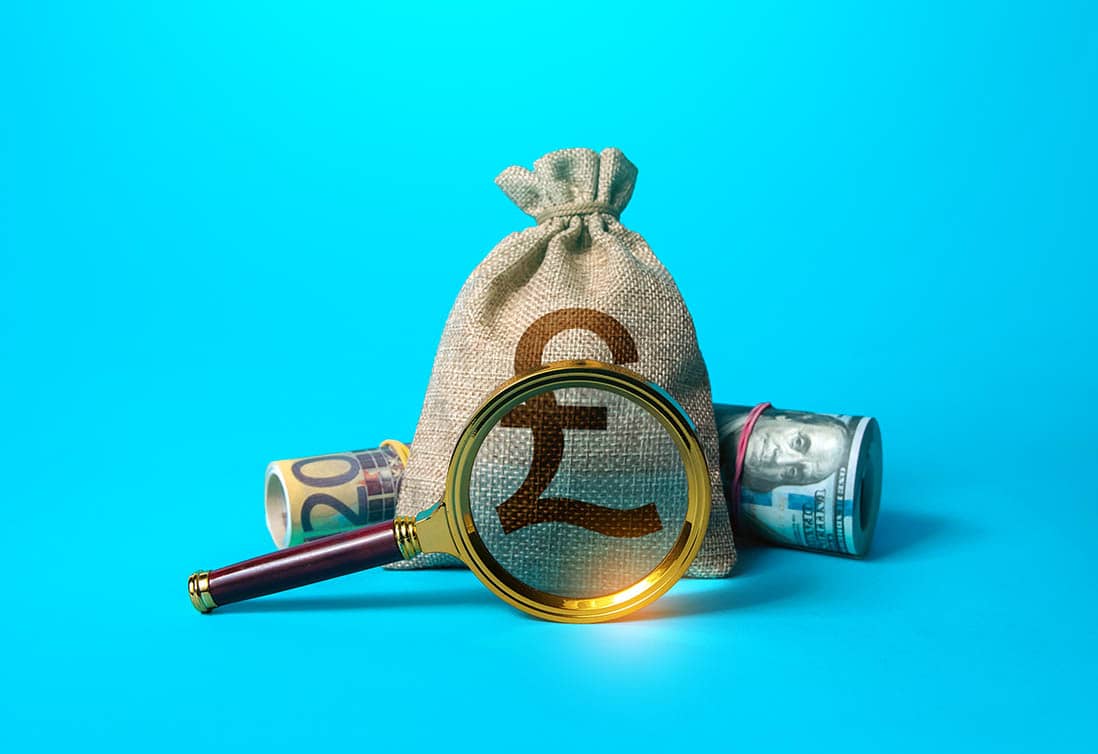 The Bank of England might have to raise its basic interest rate by 100 basis points next week and go all the way to 5% if the UK is to attract the foreign capital required to keep the Pound supported, according to new research.

Credit Suisse says for the Pound to remain supported the Bank of England (BoE) must act decisively and accelerate the pace it raises interest rates, whereas opting to stay in the 'slow lane' would "doom GBP to further losses".

The call comes ahead of the Sept. 22 policy meeting where market pricing shows investors are prepared for a hike of at least 75 basis points.

"Next week’s BoE meeting is perhaps most critical of all, as the central bank faces a binary choice," says Shahab Jalinoos, Head of FX Strategy at Credit Suisse.

"Either it hikes by at least 75bp (and preferably 100bp) in order to start on the path of taking rates to levels high enough (5% plus in our view) needed to attract sufficient foreign capital to fund a very profligate government energy subsidy policy as well as already-high consumption rates, or instead it can continue on a cautious path of 50bp hikes and instead doom GBP to further losses," he says.

The UK runs a current account deficit, largely because it imports far more than it exports. A country that is a net spender would inevitably command a perpetually declining currency, unless money flowed into the economy for other reasons.

By jacking up interest rates the Bank of England increases the yield offered to international investors on UK financial assets, which in turn supports the Pound.

This is the task the Bank faces, according to Credit Suisse, who issue their new research on the same day the British Pound outperformed the majority of other currencies.

It advanced strongly against the Euro, Dollar and all other major peers, besides the Japanese yen, after it was revealed UK inflation fell back to 9.9% year-on-year, below the 10.2% the market was expecting.

From a fundamental perspective a potential peak in inflation implies the cost of living crisis will start easing, which is good for consumers and businesses and therefore the economic outlook.

But the risk for Sterling is that the below-expectation inflation reading prompts the Bank of Englands's Monetary Policy Committee to revert to a typically 'dovish' stance when it comes to raising interest rates and opts for a 50bp hike. (Those concerned about any FX volatility could consider locking in current rates to secure their budget, more here).

"We still see the MPC increasing Bank Rate by 50bps at each of its next two meetings given how far from target headline inflation remains and the developments in the underlying measures. How ever given that the peak in inflation is now nearer and lower than foreseen we think that a 75bps move at either of the next two meetings is unlikely," says Cathal Kennedy, Senior UK Economist at RBC Capital Markets.

But were the Bank to deliver such an outcome it would prove negative for Sterling, says Credit Suisse's Jalinoos. 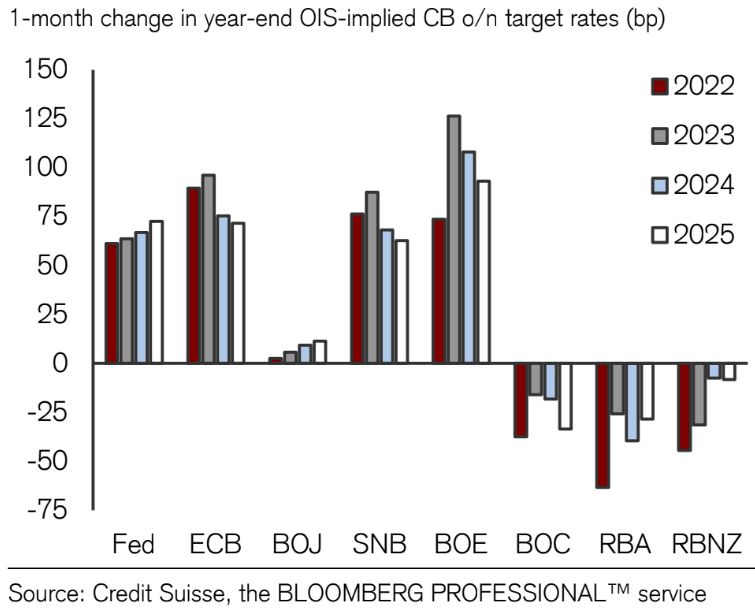 Above: In the past month the market has rapidly raised its expectation of how much further the Bank of England must hike.

"It can even be argued that the ECB now understands the true nature of the challenge it faces (keeping capital in the euro area on top of fighting high inflation) and is responding appropriately," he says of last week's decision by the European Central Bank to go with a first-ever 75 basis point hike.

"These actions are necessary (but not sufficient) conditions to end persistent FX weakness," he says. "Next week’s BoE meeting is perhaps most critical of all".

Jalinoos says should the Bank continue "on a cautious path of 50bp hikes" the Pound to Dollar exchange rate could "fall back to to 1.10 or below in short order".

"For us, tough BoE policy action on rates would be a significant signal that even the most tepid ex-US central banks are finally understanding what's at stake, and starting to take action. Which given that their currencies are not expensive, gives hope for stabilisation if not outright gains," says Jalinoos.

Credit Suisse are just one amongst a number of large financial institutions warning the Bank needs to step up and get ahead of the market.

Currency strategists at Goldman Sachs say the Bank of England will disappoint again and this would be negative for the Pound.

In a weekly foreign exchange strategy update Goldman Sachs says "the MPC is not yet ready to deliver a 75bp hike at the upcoming meeting, and that is an important near-term risk to the Pound".

They say the MPC will likely stick to another 50bp hike as they consider the impact of the recently announced cap to energy prices by the UK government, which is expected to slash the peak in UK inflation.

HSBC says the market is "tired of waiting" for the Bank to finally turn hawkish, noting it to be a reluctant hiker.

This reluctance is reflected to some extent in the Pound's ongoing decline against the majority of the world's major currencies (GBP is the second worst performer of 2022 after the Yen). 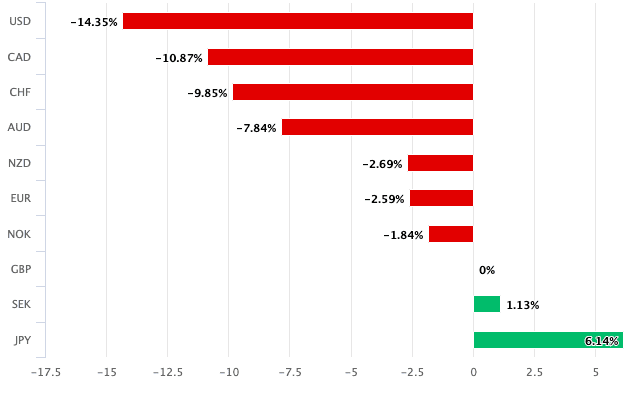 The Bank of England most recently dealt the Pound a setback when it delivered a 50bp hike in August and released a series of dire economic forecasts, that were accompanied by a sombre tone regarding the outlook.

Warnings of recession and economic decline are peculiar to the Bank of England, whereas other central banks tend to veer away from such dire warnings, knowing such a message can almost have a greater impact on monetary assets than the rate hike itself.

Foreign exchange analysts at Barclays say the Bank must establish its hawkish credentials if Sterling is to be protected from further losses.

"The extent to which GBP will depreciate versus the EUR will clearly depend on the preferences of the central banks," says Themistoklis Fiotakis, an analyst at Barclays.

Money market pricing shows investors to have ramped up the scale and pace they expect the Bank of England to deliver higher interest rates, a sign of "the market’s belief that the BoE will establish its price anchoring credentials," says Fiotakis.

Therefore if the Pound is to appreciate, or to hold its value, in the wake of next week's Bank of England decision, the Bank must meet the market's expectations by going for a 75 basis point hike.

"GBP has underperformed – if the BoE confirms market expectations, some of this underperformance is likely to unwind, in our view," says Fiotakis.