Surging UK inflation has undermined the UK's economic growth prospects and this will weigh on the British Pound going forward, according to analysts at the UK's largest bank.

The UK reported year-on-year inflation leapt to 10.1% in July, which was higher than investors were expecting and suggests the country is now well on track to meet the Bank of England's prediction for inflation to peak near 13%.

The rising inflation levels will in turn put pressure on the Bank of England to raise interest rates further as it seeks to get a grip on rising prices, typically something that might be expected to help a currency.

But higher interest rates and rising inflation will combine to diminish business and consumer activity, weighing on the economy, which could in fact weigh on the Pound

"The UK’s data pulse has been weakening more notably over recent months and points to greater downside risks," says Bunning.

"The Bank of England may find itself in the position where it accelerates its tightening cycle at the very time the risk of a more pronounced economic slowdown becomes a reality," he adds.

HSBC's research finds Bank of England policy expectations have in fact become more important for Pound exchange rates than has been the case in the recent past.

But unfortunately for those readers wanting a stronger Pound the Bank of England has become an outright drag on the currency that will continue to weigh.

"GBP has been heavily influenced by broader risk appetite this year... the relationships between cable and a range of other variables, with equity movements generally the dominant driver of GBP. But the impact of rate differentials has actually jumped above that of risk appetite. This should make the Bank of England’s hike path from here more important," says Bunning. 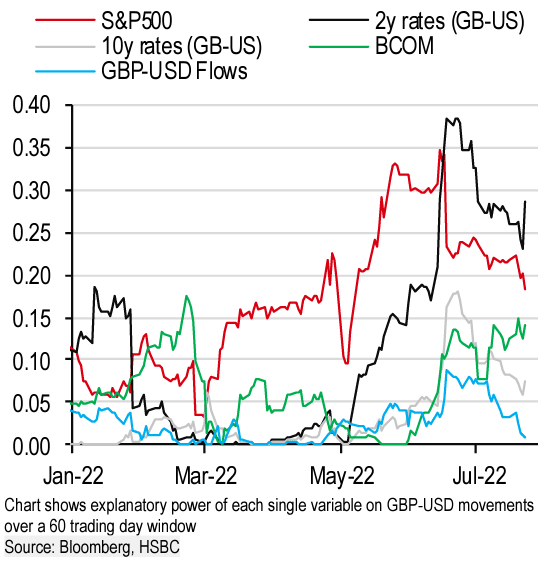 Above: "Rates have been more important for GBP than risk appetite recently" - HSBC.

The Bank of England hiked interest rates 50 basis points on August 04 but delivered a dire set of economic forecasts.

Ultimately the market ignored the rate hike and the promise of further hikes to focus on forecasts that showed an enduring recession was about to start, and the Pound was sold as a result.

HSBC says the Bank of England has been too slow in its quest to challenge inflation by raising interest rates (specifically, market expectations show investors have consistently expected more than the Bank has actually delivered in terms of rate hikes).

Above: "Flattening of UK yield curve has been associated with GBP weakness" - HSBC.

"The FX market is getting tired of waiting for the BoE to actually deliver something more hawkish," says Bunning.

The August rate hike of 50bp was expected by currency markets beforehand and a further 100bp of hikes are still expected by year-end.

"The BoE has, at best, met market expectations for hikes, and has actually under-delivered more than over-delivered, pushing GBP lower," says Bunning. 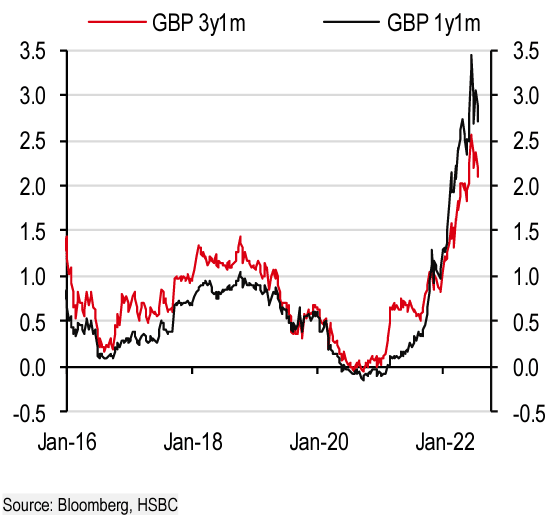 Above: "Rates expectations remain very elevated, especially for the year ahead" - HSBC.

"The market sees this hiking cycle as short-lived, making it harder for GBP to sustain gains on the near-term hikes that are priced in," says Bunning. 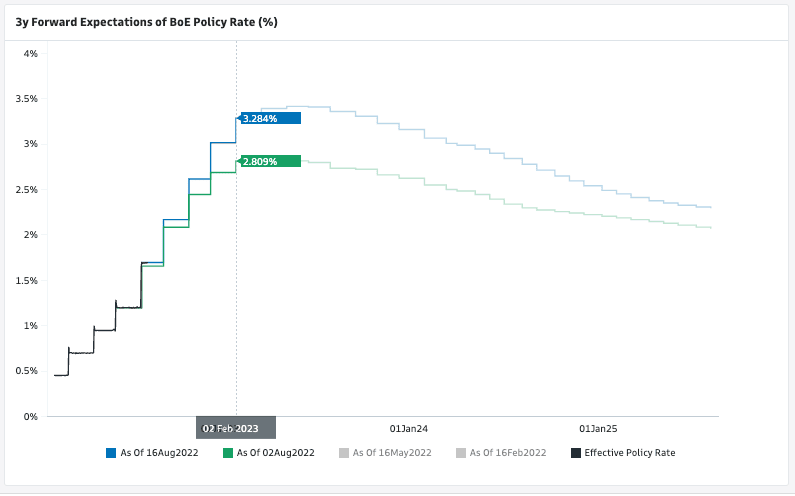 Above: Bank of England rate hike expectations show rate cuts are due in 2023. Image courtesy of Goldman Sachs.

The remainder of 2022 should be characterised by Pound Sterling weakness, according to HSBC.

"We have warned for some time of the cyclical and structural challenges facing GBP and the balance of risks remains to the downside through the rest of 2022," says Bunning.

HSBC's exchange rate forecasts show the Pound to Dollar will stay below 1.20 through the next three quarters, with 1.17 pencilled in for year-end ahead of 1.16 for the first and second quarters of 2023.