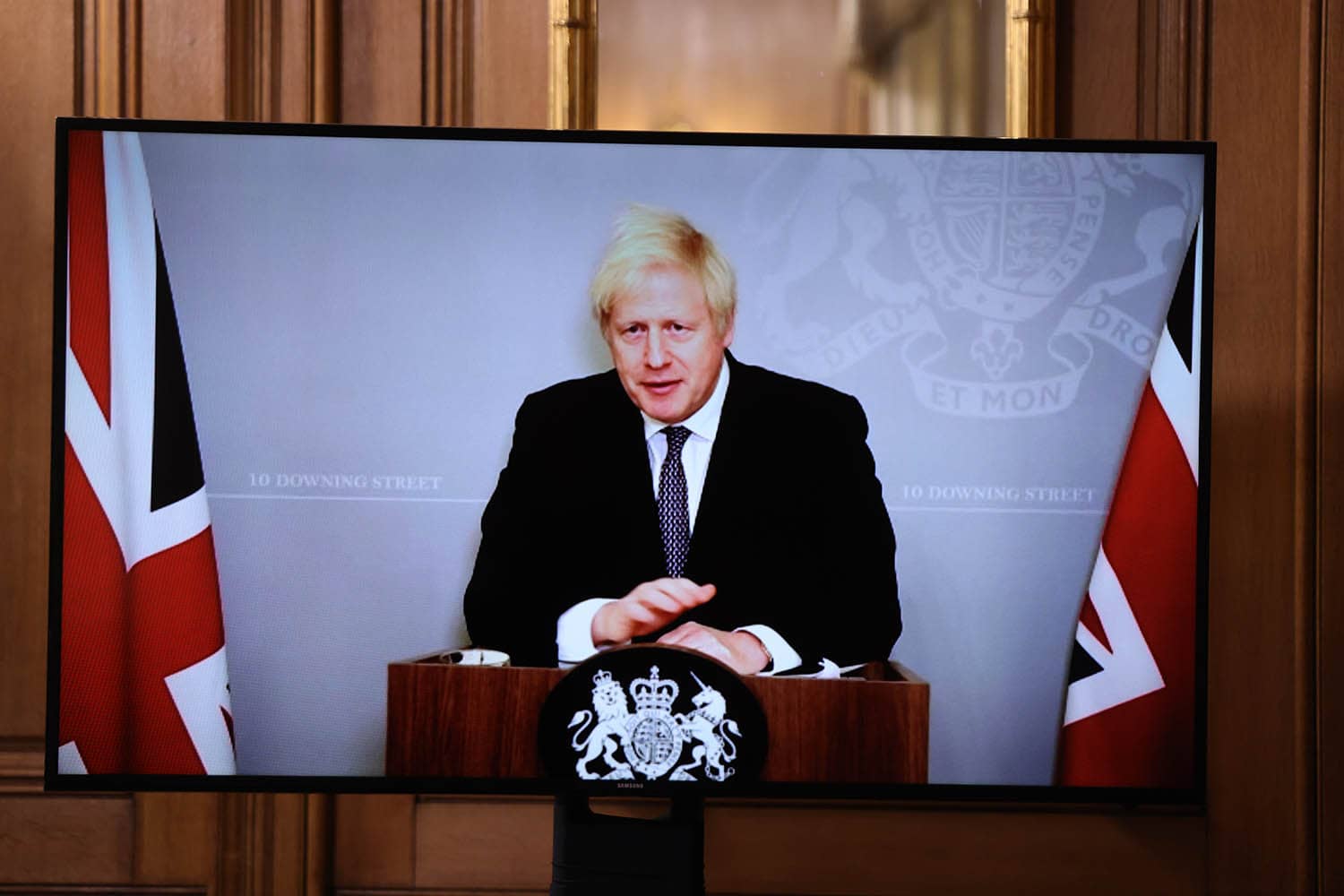 Above: Prime Minister Boris Johnson. Johnson said the UK won't budge on the matter of fisheries in trade negotiations. Picture by Pippa Fowles / No 10 Downing Street

It could be time to fade the British Pound's Brexit optimism say analysts at TD Securities, a call that comes amidst growing evidence that Brexit talks between the EU and UK have all but stalled.

According to new research from the investment bank, much of the uncertainty that has weighed down Sterling over recent months and years has already dissipated and the Pound might have already fully costed a trade deal being reached between the EU and UK by year-end, leaving limited upside potential should a deal be secured

"All our short-term (1-3 month) dashboard tools argue to sell GBP," says Mark McCormick, Global Head of FX Strategy at TD Securities in a recent note to clients. "We think part of the Brexit process itself has been priced out. Brexit pricing, to the contrary, might be too upbeat now."

This will disappoint many readers who have been watching Sterling for weeks, if not months, waiting for a deal to unlock a sizeable rally in the Pound.

The Pound has been in an uptrend since September as markets began to bet the pieces were finally falling into place for a deal to be achieved by year-end: the Pound-to-Euro exchange rate hit a two-week high of 1.1278 this week, but had been at two-month highs at 1.1285 earlier in November: 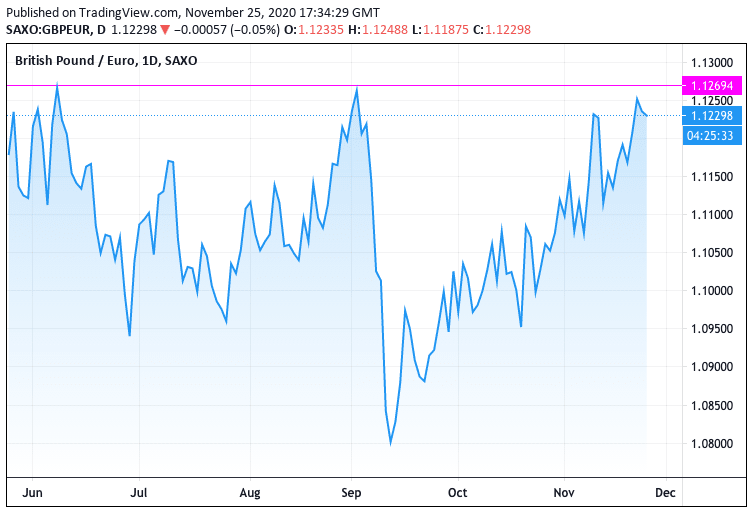 Above: Is the GBP/EUR peaking near a solid line of resistance? Lock in today's rates for use at a point in coming months if you would like to protect your payments budget from volatility, find out more here.

The Pound-to-Dollar exchange rate has meanwhile rallied to a new two-month high of 1.3394 on Thursday.

But the Pound now looks vulnerable to any setback in the news flow concerning negotiations, which could well happen given negotiations are fast running out of time before the transition period ends.

It is believed that the EU's Chief Negotiator Michel Barnier was due back in London on either Thursday or Friday to reconvene face-to-face talks this weekend. However, media reports say Barnier told his opposite number David Frost that there was perhaps no point in him coming across the channel as the two sides were no longer making progress.

Wednesday saw France's foreign minister Jean-Yves Le Drian tell French politicians that the UK had still not yielded on the matter of fisheries.

France has indicated in the past that it wants to enjoy unchanged access to UK fishing waters, while recent reports have said that they do accept they will see their quotas decline to a degree.

But the French minister said "British overtures remain insufficient on the most sensitive matters."

The two sides still look far apart on the matter of fisheries with Le Drian saying "it’s up to the British to come out of tactical postures and make the necessary gestures. Sometimes it’s better to have no deal than a bad deal."

"At this time, Britain is dragging its feet on secondary matters and is playing with the calendar. I say this to our British friends, we won’t let the calendar take priority over the content of the accord," said Le Drian in a parliamentary hearing.

On the matter of fisheries, UK Prime Minister today told parliament, "our position on fish hasn't changed, we'll only be able to make progress when the the EU accepts reality we must be able to control access to our waters."

Yet, the Pound's ongoing robust performance on currency markets betray a market still confident a deal can be done.

"A deal is likely in the very short-run, though it's unlikely that it is signed, sealed, and delivered before year-end," says McCormick.

Various analytical models utilised by currency researchers at TD Securities apparently show the Pound to be overvalued in the short-term, with a premium ranging from 2%-3.5%.

"Our positioning tracker (PIT) also tells us that the price action is currently too upbeat - it implies a move below 1.30 in the weeks ahead," says McCormick.

Forecasts for the British Pound in 2021 from HSBC reveal expectations for the currency to decline, even in the event of the UK and EU achieving a post-Brexit trade deal.

The view from the UK's largest bank flies in the face of consensus in the analyst community which says the Pound will rally against the likes of the U.S. Dollar and Euro over coming months, provided a deal is reached between the EU and UK before the year-end cut-off.

"We maintain a counter-consensus view on GBP, and expect the currency to weaken from current levels," says Dominic Bunning, Head of European FX Research at HSBC Bank plc. "We doubt that recent GBP resilience can last".

It must however be emphasised that views on the outlook for the Pound in the event of a deal being reached are varied, with some analysts saying the currency can enjoy notable gains in the event that a deal is reached.

Joe Tuckey, an analyst for London-based international payments provider Argentex, says patience will need to be exercised by those looking for a post-Brexit trade deal to boost their foreign currency purchasing power. He says that while recent progress in trade negotiations has reflected well on Sterling, "traders have become wary of making too much commitment until something concrete is announced. We expect significant moves for Sterling remain most probable in mid to late December."

Tuckey said earlier in November that a breakthrough in trade negotiations could allow the Pound-to-Euro exchange rate to rally to its highest levels since June 2016. "A 1.25+ GBP/EUR scenario is not an unreasonable forecast," said Tuckey.

The most bullish forecast we have come across is that from hedge fund Toscafund, who see the potential for GBP/EUR at 1.30 and GBP/USD at 1.70 in the months following a deal being reached.

"We are no less swiftly coming to a point of reckoning when Brexit becomes a DONE DEAL and the Pound can rise to its proper level of c1.3 against the euro and buys c1.7 dollars," says Dr Savvas Savouri, Chief Economist at Toscafund Asset Management.