The London-listed provider of foreign exchange services to institutions, corporates and high net worth private individuals sees scope for a return to levels not seen since June 2016 amidst a raft of market relief that would bring to an end four years of chronic uncertainty over the UK's future relationship with the EU.

"Over the past weeks Sterling buying has emerged on the merest hint of progress as traders keep their ear to the ground for any signs of a breakthrough. With a sense of optimism in the air, the market does not want to miss out on the anticipated Sterling rally on a last minute deal," says Joe Tuckey, Analyst at Argentex.

Sterling fell 7.80% against the Euro in the June 2016 when the UK voted to leave the EU, and since this point the GBP/EUR has not been able to recover above 1.20 for any meaningful amount of time. Indeed, 1.20 appears to be a significant barrier to Sterling's attempted recoveries.

But this could change in the event of a deal being agreed.

"If a breakthrough is indeed on the cards, a 1.25+ GBP/EUR scenario is not an unreasonable forecast,” says Tuckey. 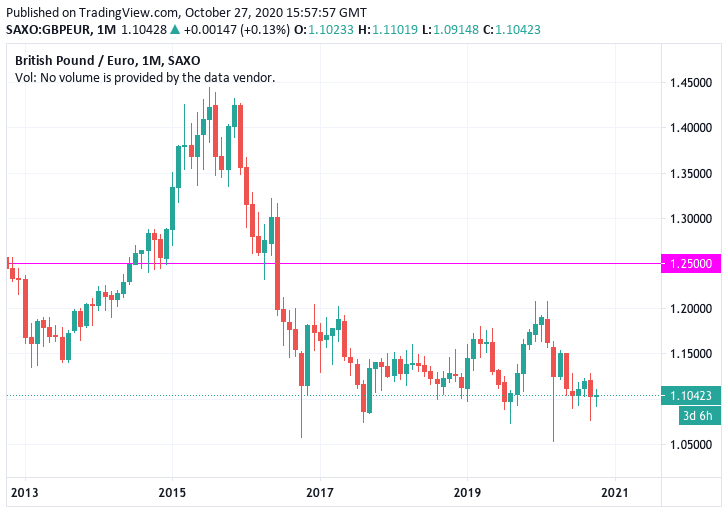 Optimism on the direction of trade talks rose at the start of the final week of October on confirmation that the EU's negotiating team agreed to continue talks in London until Wednesday Oct. 28, amid cautious optimism on both sides over the revived negotiations.

Indeed, reports out at the start of the week said it might be possible to reach some kind of agreement by Saturday, October 31 and analysts have grown increasingly confident in Sterling's outlook as a result of progress towards a deal.

"Sterling is likely to head stronger still if the two sides can reach a sufficient level of agreement to 'enter the tunnel' of final negotiation details – a signal that a 'No Deal' scenario is off the table. This type of announcement could come anytime between now and mid-November and see an additional jolt of GBP strength," says John J Hardy, Head of FX Strategy at Saxo Bank.

The Pound rallied last week as expectations for further gains in the Pound rose following a commitment by the EU and UK to intensify negotiations with a view to deliver a deal towards mid-November. The intensified negotiations mean talks take place on weekends and will roll on until a fresh deadlock or a deal is reached.

It remains unclear as to whether the current talks can yet be defined as 'tunnel' discussions.

Agreeing a deal would provide some much-needed certainty to UK businesses and investors, sentiment which is in turn expected to be reflected in stronger Sterling exchange rates.

However there appears to be a great divergence in the forecasts held by economists, strategists and financial market commentators as to just how sizeable a relief rally Sterling would see.

The forecast by Tuckey for a Pound-to-Euro exchange rate at 1.25+ represents the upper end of expectations in the analyst community, with a median forecast being located around the 1.15 area. (Please see the latest forecast download released by our partners at Global Reach for the exact median, maximum and minimum forecasts, here).

Analysts at TD Securities say they are fairly constructive on Sterling on a longer-term basis given recent market dynamics, but those looking for a sharply higher Pound-Euro exchange rate will potentially be disappointed by the targets pencilled in by TD Securities.

"We continue to target a move up in GBP/USD to 1.35 (for GBP/USD) for year-end and forecast of 1.38 for 2021-Q4. Within this, we note that we expect USD depreciation to be the primary factor. Indeed, our forecasts imply a path for EUR/GBP that stays mostly in the 0.90/91 range over our horizon," says James Rossiter, Head of Global Macro Strategy at TD Securities.

A range in EUR/GBP of 0.90/91 equates to a range in GBP/EUR of 1.11-1.0989, suggesting limited upside for the Pound-Euro exchange rate from current levels in the event of a deal being reached.

However, a shorter-term spike above this range is still possible and TD Securities see some "tactical" upside in buying Sterling against the Euro in anticipation of a deal being reached saying they think there is "currently an excessive risk premium relative to the EUR."

Rossiter says there is scope for a move toward the early September highs in GBP/EUR at 1.1286.

Goldman Sachs meanwhile continue to advocate investors buy the Pound against the Euro with a target for the exchange rate set at 1.15 in the event of a deal being reached.

"While we recognise that the negotiations appear to have become more acrimonious, and deadlines really are approaching, we still think the UK and EU are on a path towards coming to a 'thin' agreement over the next few weeks. We note that the threats to withdraw have so far come with caveats, and leaders appear to have preserved options to deescalate if needed. Therefore, we continue to recommend that investors stay the course," says Pandl.

Rabobank see potential for the GBP/EUR exchange rate to climb back to 1.1235 if a Brexit deal is announced in the coming weeks. They see little prospect of GBP/EUR being able to push much above the 1.1235-1.1364 area in the coming months "with the agreements made likely to be limited and with the possibility of border disruptions in January high," says Jane Foley, Senior FX Strategist at Rabobank.

"We don’t expect that relief at the end of the Brexit process will be sufficient to divert attention away from a poor set of UK fundamentals," she adds.

Foreign exchange analysts at UK high street lender Natwest Markets say they see EUR/GBP and GBP/USD moving to around 0.87 and 1.33, respectively in the event of a deal being reached. (EUR/GBP at 0.87 = GBP/EUR at 1.15).

"If we are wrong on the market’s assigned relative probabilities, then Sterling will move more or less than we expect. Given the better mood music of recent weeks, risks appear skewed in favour of a smaller move," says Paul Robson, Head of G10 FX Strategy EMEA at Natwest Markets.

Natwest Markets cite a host of headwinds for the UK economy and its currency over coming months, even in the event that the EU and UK reach a tread deal including the increased difficulty in doing business between EU and UK companies.

"Even under a 'deal' outcome, companies will have to adjust to a much more limited trading structure with the UK’s largest trading partner. Many details are yet to be known and it will take time to adjust to them once they are known. Recent media reports on the potential disruption to the auto industry due to origin of components restrictions is one example," says Robson.

In addition, NatWest economists foresee weaker inward Foreign Direct Investment flows on a weakening growth outlook for the economy, while restrictions on the free movement of labour once the UK exits the transition period will weigh on activity.

The substantial deterioration in the government's finances in the wake of funding its response to the covid-19 pandemic will meanwhile leave limited room for increased government expenditure to stimulate the economy.

"Sterling has largely held on to its losses despite rising optimism that a Brexit deal is coming," says Robson. "The economy is struggling under the weight of a broadening and intensifying Covid -19 lockdown."