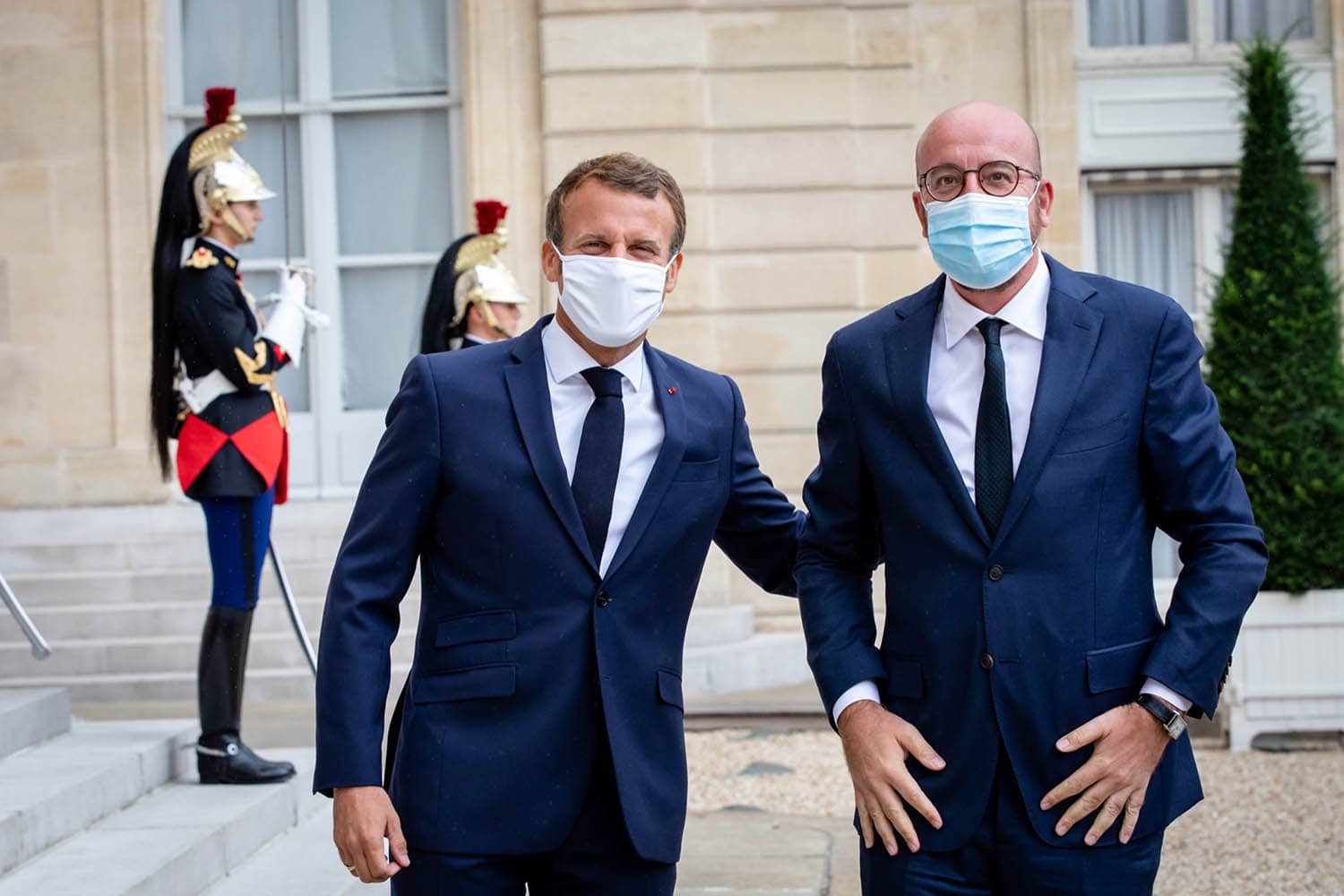 The British Pound started the new week on the front foot against the Euro, Dollar and other major currencies amidst an improvement in sentiment towards the UK currency based on a view a Brexit trade deal was on course to be delivered, however nerves are expected to remain elevated ahead of a crunch meeting of EU leaders on Thursday and Friday.

This week sees EU leaders meet in Brussels for the 15-16 October European Council meeting, where EU-UK relations are on the agenda. EU states will be asked to consider the current state of negotiations and it is expected to set the scene for a final push to reach a deal.

No political commentators or politicians are expecting a deal to be reached at the summit, rather EU leaders are likely to agree on what the outlines of a final deal might look like which would in turn allow for negotiators to aim for a month-end deadline.

The EU's Chief Negotiator Muchel Barnier has said that October 31 is the "realistic deadline" for an agreement to be reached if new trading arrangements are to be in place for the end of the UK's post-Brexit transition period on January 1.

"GBP/USD will be driven by the outcome of the EU‑UK trade negotiations. EU leaders will review the negotiations at the European Council Summit (Thursday‑Friday). Meanwhile, UK Prime Minister Johnson is ready to pull the plug on the talks if no deal is reached by Thursday. GBP/USD can rally above 1.3500 in the near‑term if both parties agree on a deal," says Kim Mundy, a foreign exchange strategist with CBA. 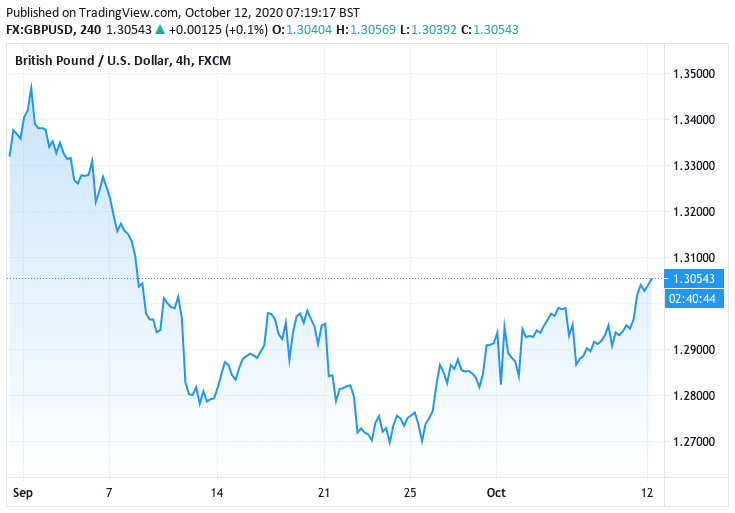 Above: GBP/USD price action since September.

"Under a no deal outcome, GBP/USD downside will likely be contained around 1.2500 because GBP/USD is already significantly undervalued," adds Mundy.

At the start of the week the Pound-to-Dollar exchange rate is trading at 1.3046, the Pound-to-Euro exchange rate is trading at 1.1035. Those looking to protect against a fall in the Pound should be aware that these are relatively elevated levels for GBP/EUR and GBP/USD when compared to early September, and it is possible to secure current levels for use at a future point, thereby protecting your budget against further volatility. Learn more here.

The EU and UK remain hung up on the issues of fishing rights, level playing field arrangements for business, and how the future relationship will be governed. 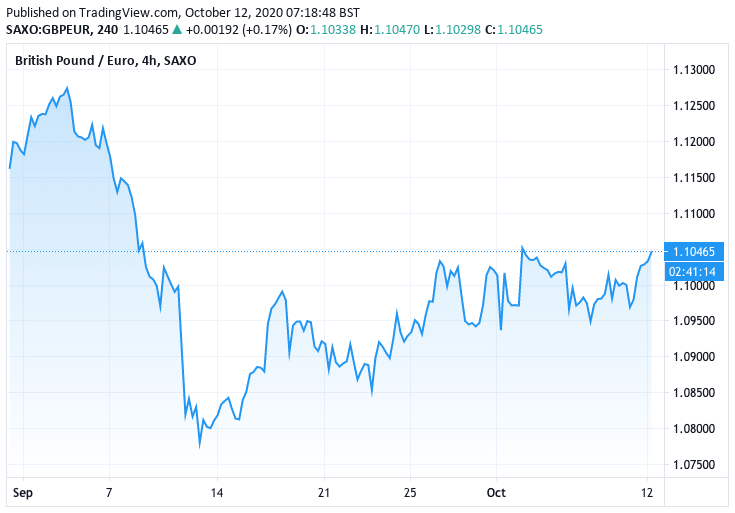 Above: GBP/EUR price action since September

Gove said the prospect of a deal being struck had now risen towards a 66% likelihood, while Frost gave some compelling hints to suggest a deal on a level playing field and governance were in sight.

"I can quite see us being ready to use them just as much as the EU in future. Other EU countries subsidise quite often more than we do and that could definitely have impact on us," said Frost.

Political commentators with a nose for Brexit negotiations suggest this could be a signal that a major shift on the state aid and level playing field provisions is likely to be announced.

Frost added "a deal is eminently achievable and can be achieved, but it's also possible we won't get there."

This leaves the political 'hot potato' of fishing up for negotiation, and leaders such as France's Emmanuel Macron will not want to be seen rolling over to the UK on the matter. It would not be unrealistic to believe France and other EU coastal states will hold out to the very end to try and secure as much access to UK waters as is possible, which should mean talks extend until Barnier's October 31 deadline.

Expect nerves to be elevated until this point, which should mean Sterling continues to experience significant volatility but ultimately makes little meaningful directional progress.

Only once it becomes clear that a deal or no-deal is in the offing would we expect Sterling to make a sizeable directional push.

"I expect GBP to outperform the other majors in coming weeks," says Sean Lee, managing director of FXWW. "I’ve been dipping my toes back in the long-GBP market for the last few days and I feel that the upside pressure is about to intensify."

Ahead of the EU Council summit, UK Prime Minister Boris Johnson on the weekend spoke with French President Emmanuel Macron and German Chancellor Angela Merkel in an effort to inject top-level impetus into negotiations.

The official account of both calls said Johnson updated the leaders on the progress achieved in current negotiations and hoped a deal could be done, although he was ready to accept an Australia-style 'no deal' outcome.

A Bloomberg report out Monday sheds further light on the meetings, saying Johnson told the two leaders the EU will have to back down from its hard-line position on the politically explosive issue of fisheries if an agreement is to be found.

"Talks resume in Brussels on Monday, and are set to continue at least until Merkel, Macron and the bloc’s 25 other national leaders convene on Thursday for a summit in a separate building close by. If Johnson is persuaded that the EU is ready to do a deal, discussions are likely to continue in the Belgian capital for a further two weeks," says the report.

The report adds there has been extensive back-channel contact in recent days between London, Paris and Berlin, officials said, indicating that all parties are pushing to get a deal over the line.