- GBP supported around 1.10 vs. EUR, 1.29 vs. USD
- Looming breakthrough on key issue of state aid
- But fight on fisheries to prevent Oct. deal
- GBP tipped to stay volatile and trendless 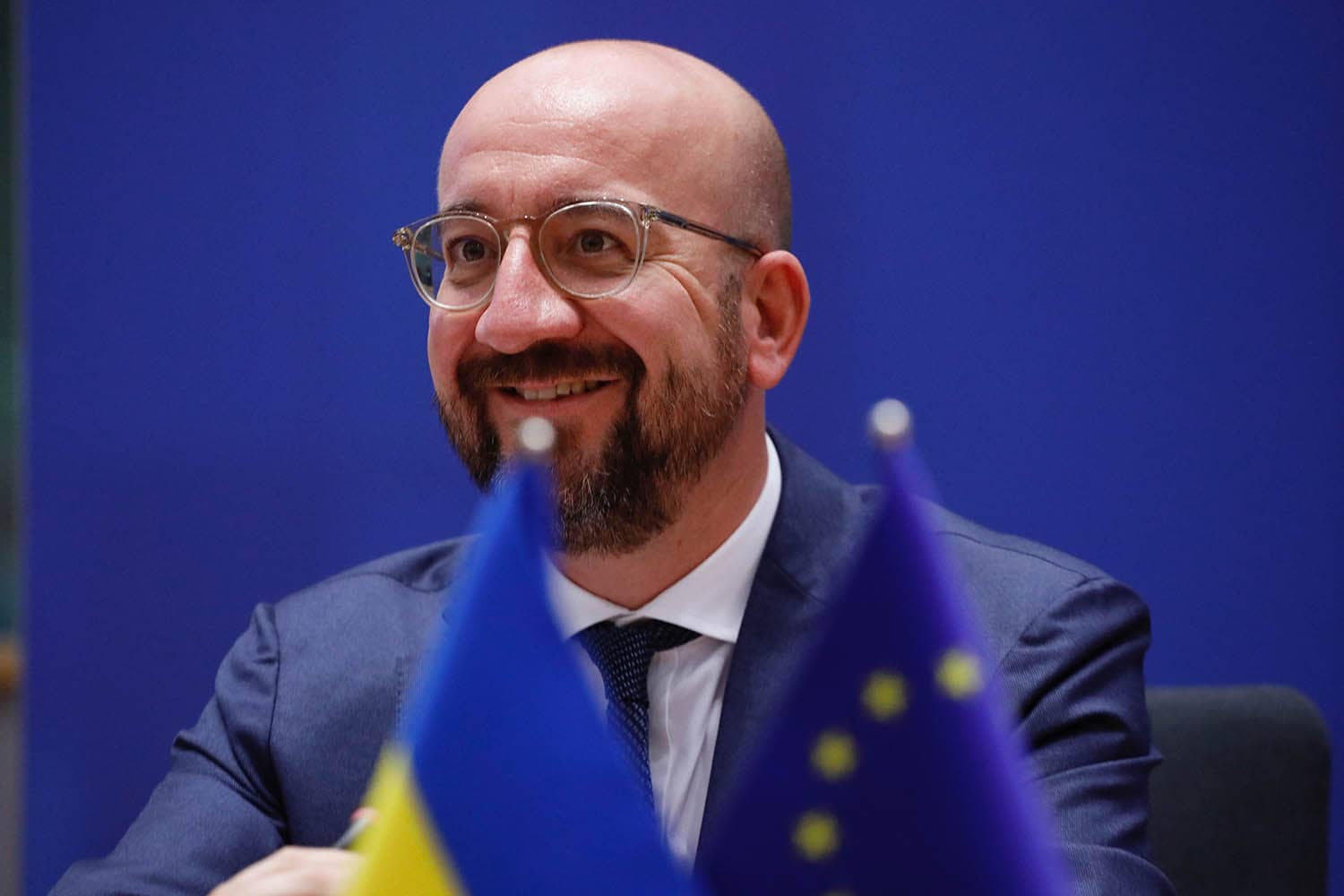 The British Pound is both highly volatile and trend-less at the same time, a consequence of markets reacting to the latest Brexit headlines but ultimately showing little conviction on whether now is a good time to buy or sell the Pound.

Traders and algorithms continue to be buffeted by newswire reports quoting unofficial sources with an insight into Brexit developments which trigger sharp short-term moves but ultimately offer little substantive information to bet on, while official briefings by politicians on both sides remain thin on detail and invite speculation.

This theme will likely persist and Pound Sterling is being tipped to retain a volatile tone over coming days as anticipation builds ahead of a crucial October 15 European Council summit of EU leaders, where concrete details on the outlook will likely be forthcoming.

Ahead of the summit, the mood has improved somewhat with recent developments appearing to suggest that one major sticking point that had held back negotiators reaching a deal has been potentially overcome.

Perhaps there is an ommission here, but headline-hungry foreign exchange traders whose ears are piqued to nuance might be inclined to see some progress.

The Pound recovered earlier losses around the time this development made it through to the markets, with the Pound-to-Euro exchange rate going back to 1.10, where it is on Thursday morning. The Pound-to-Dollar exchange rate has meanwhile held ground above 1.29 and is at 1.2936. 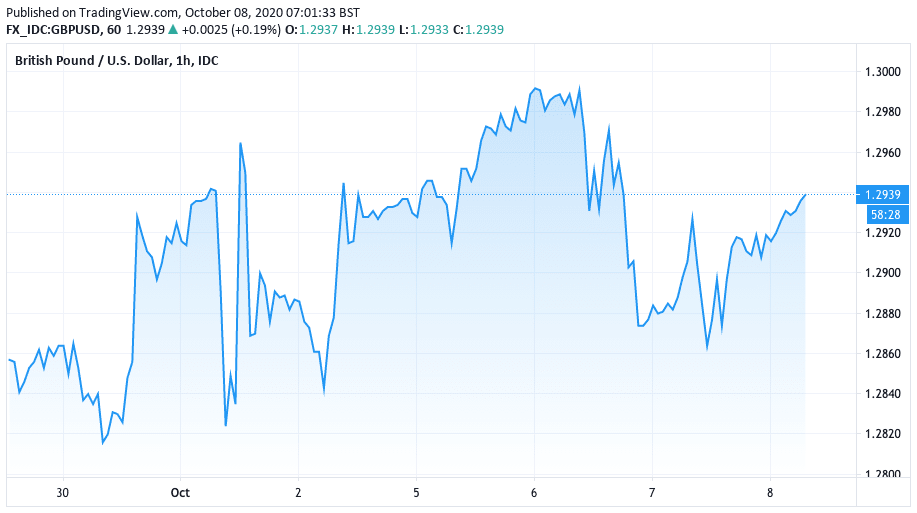 Above: Volatility in GBP/USD this October. If you would like to discuss protecting against volatility by securing current rates for use at some point in the future, please find out more here.

On the issue of state aid and governance, a clue as to some progress might have been given by UK Chief Negotiator David Frost who told the House of Commons Brexit Committee that the UK would benefit from strong dispute settlement measures on state aid.

"I can quite see us being ready to use them just as much as the EU in future. Other EU countries subsidise quite often more than we do and that could definitely have impact on us," said Frost.

Political commentators with a nose for Brexit negotiations suggest this could be a signal that a major shift on the state aid and level playing field provisions is likely to be announced.

Frost added "a deal is eminently achievable and can be achieved, but it's also possible we won't get there."

The UK's most senior minister in charge of implementing Brexit policy Michael Gove appeared alongside Frost and told the Committee that he believes estimations of a 60% chance of a EU-UK trade deal as being "about right".

A report in The Guardian late on Wednesday proved to be Sterling positive as it said the UK is prepared to make a major compromise to secure security ties with the EU by pledging in a deal on the future relationship not to rip up the Human Rights Act.

The UK is said by EU sources to be "moving" in negotiations on the issue.

Despite the Sterling-positive developments there does remain an abundance of caution and both sides appear prepared to enter a 'war of attrition' on the final, outstanding issues.

Following his call with Prime Minister Johnson, Michel cautioned, "the EU prefers a deal, but not at any cost. Time for the UK to put its cards on the table."

Of particular concern will be fisheries, which has a low economic bearing on future relations between the EU and UK but is highly politically sensitive, particularly for France.

Reports on Tuesday said French President Emmanuel Macron was proving to be entrenched in his demand that the UK cede the same access to their waters as was the case when they were a part of the single market.

Macron's resistance is understandable given the vocal nature of the French fishing industry and he could want to be seen to be holding up the entire deal in order fight their corner.

"In the area of fishing rights France still seems unyielding," says Thu Lan Nguyen, FX & EM Analyst at Commerzbank. "But even if progress comes in small steps that is likely to be sufficient for the market to remain friendly towards Sterling for now. The risks of course remain high which is why things are more interesting on the options market. Risk premiums here eased recently. However, particularly for those who want to remain on the safe side short term this should constitute a good entry opportunity."

But it is not just France which looks set to hold tight on their demands of the UK as Ireland and the Netherlands also have significant interests in the matter.

The EU upped pressure on the UK over the matter on Wednesday when Ireland's Foreign Minister Simon Coveney came out and said the UK must not underestimate the EU's position on the matter of fisheries.

Coveney appeared intent on rewriting international maritime law when he questioned the economic sovereignty a nation has in its territorial waters by saying the fish in UK waters are "not British fish, not EU fish". To draw line down sea is "ridiculously simplistic" way of doing a deal.

Newswires meanwhile reported on Tuesday that the UK is still standing by an October 15 deadline, whereby enough progress must have been made for talks to continue.

This particular headline resulted in a selloff in Sterling according to the charts, serving as a reminder that short-term volatility is likely to remain elevated.

"UK investors still have Brexit to deal with, and the resolute approach of the UK side appears to be unsettling the Pound. A headline suggesting the UK will walk away from talks if no deal is on the cards by 15 October hit sterling, reinforcing the generally negative tone of the last few days despite EU willingness to keep negotiating," says Chris Beauchamp, Chief Market Analyst at IG.

"This might look to Whitehall like it is finally gaining a psychological ascendancy over the EU side, but it is a dangerous game to play, with markets likely to take a disorderly exit in a very unpleasant frame of mind," says Beauchamp.

With some progress apparently being made, the outstanding issue now remains fishing: something that is of little consequence in terms of economics but is politically explosive and it is this subject that could take talks down to 'the wire'.