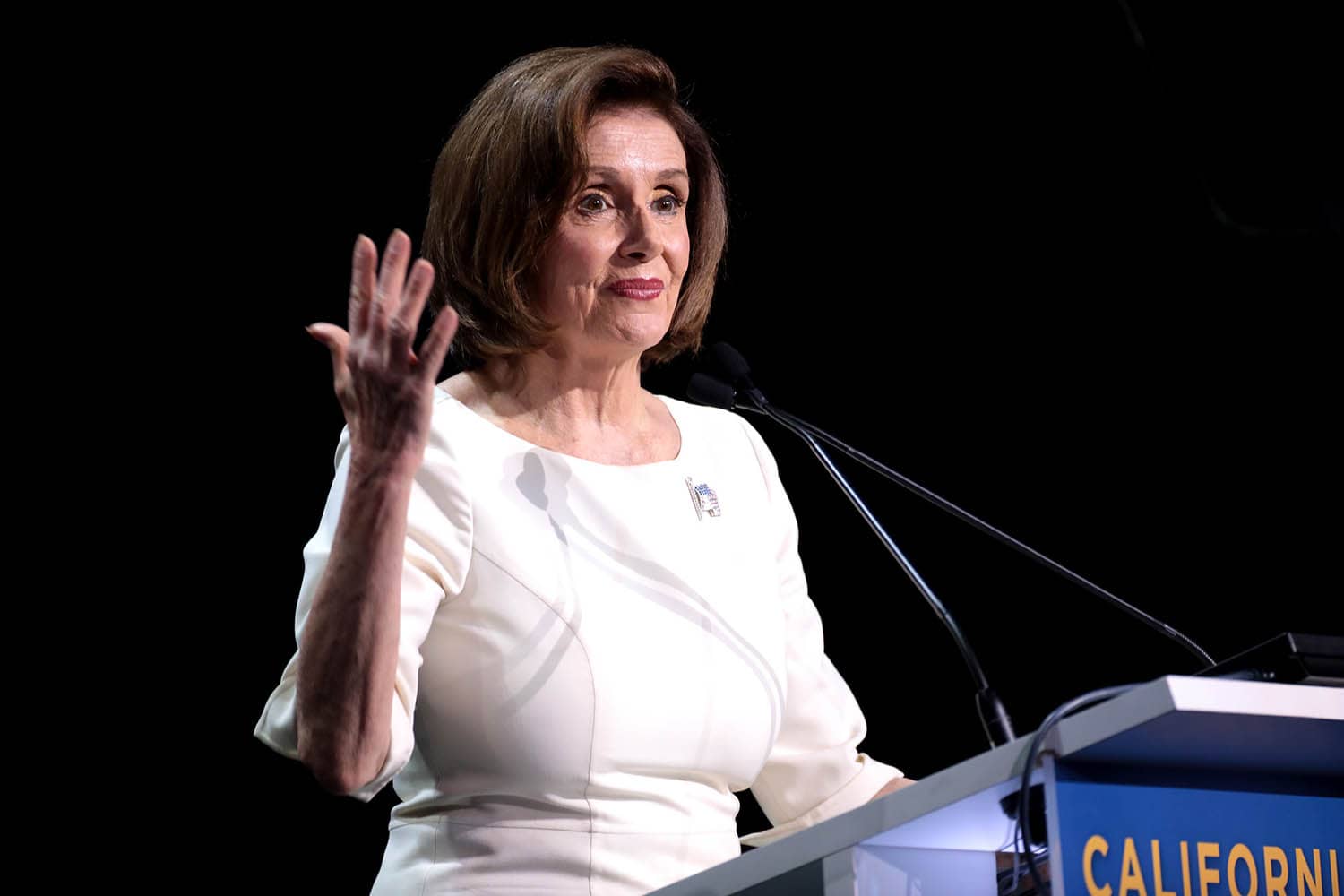 The Pound-to-Dollar exchange rate surged late in the Friday session and enters the new week with a fresh pulse of momentum behind it, however weekend headlines concerning the status of an U.S. economic stimulus bill and Thursday's key Brexit milestone could yet mean a foray above 1.30 proves short-lived.

GBP/USD rose Friday amidst a broad-based sell-off in the U.S. Dollar that came courtesy of news that U.S. politicians were closing in on a stimulus deal, a development that saw equities and commodities rise while the 'safe havens' such as the Dollar and Yen fell.

The Dollar slumped across the board after Treasury Secretary Steve Mnuchin was reported to be preparing to present Nancy Pelosi with a $1.8TN stimulus offer.

U.S. President Trump said that relief bill negotiations are 'moving along' and urged both sides in the negotiations to "go big!"

However, Democrat House Speaker Nancy Pelosi on Saturday rejected the most generous Trump administration plan to date as "one step forward, two steps back" while the Republicans who control the Senate dismissed it as too expensive and a political loser for conservatives.

The Dollar will likely remain prone to developments concerning the stimulus bill over the coming week, with the rule of thumb being that any progress towards finally settling a deal will be negative, while setbacks will likely be positive. 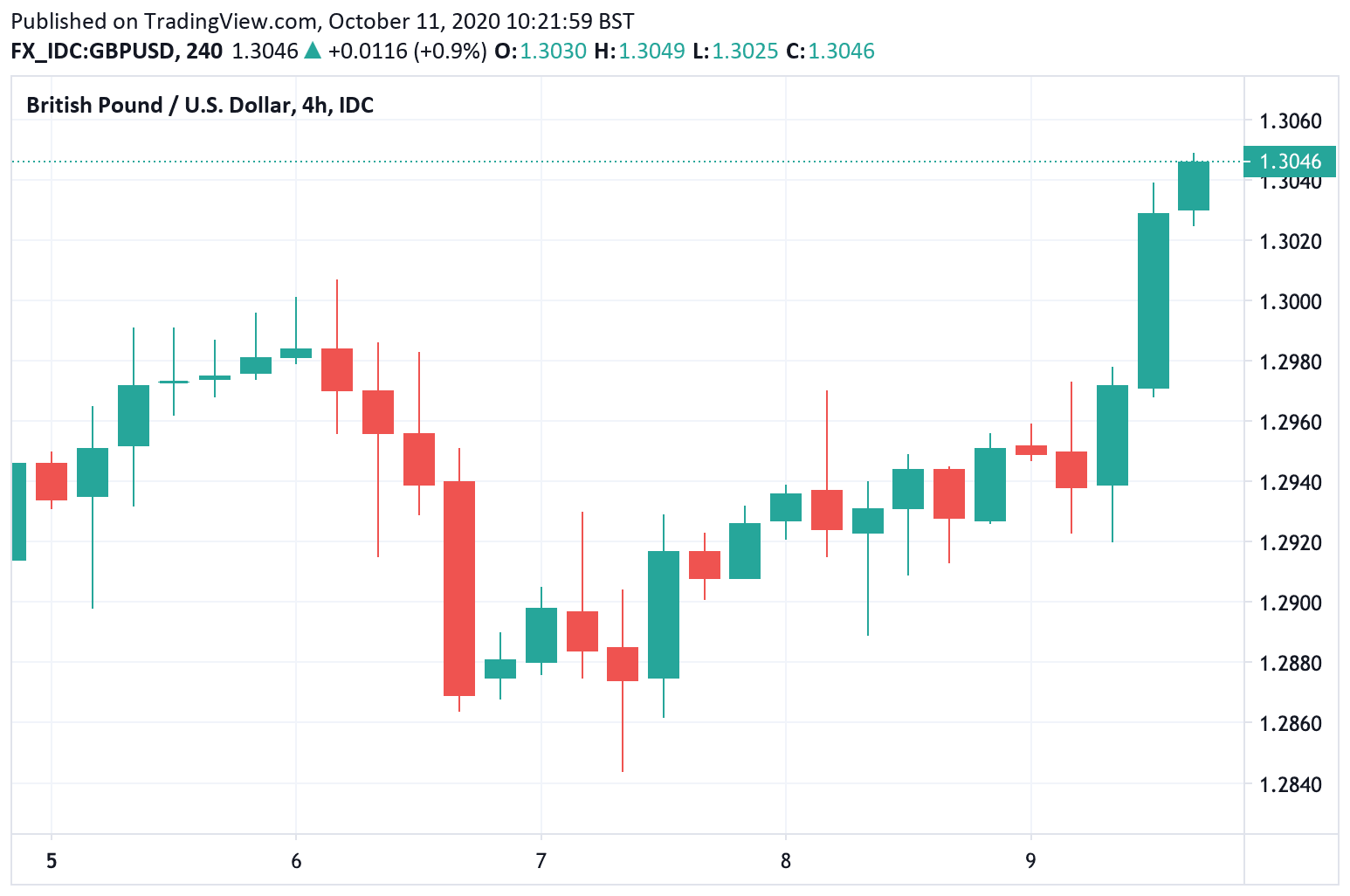 If you have impending Dollar-based payments and would like to book today's exchange rate for use in future months, thereby protecting your budget, please learn about the tools available to you here.

The fundamental developments could draw questions on the improving technical picture for the GBP/USD exchange rate.

"GBP/USD stays well supported and despite the recent bearish 'reversal day' our bias stays higher for a retest and eventual break above key resistance at 1.3007 to confirm we are seeing the formation of a larger basing process," says David Sneddon, a technical analyst at Credit Suisse.

The Pound-Dollar exchange rate will be subject to further developments regarding the U.S. stimulus bill this coming week, as well as developments concerning Brexit.

The highlight for Sterling in the week ahead will be the outcome of the October 15 meeting of EU leaders at the European Council.

Brexit trade negotiations are on the agenda and the message from the EU will likely determine the market's expectation on whether a deal is in fact possible or not.

"After more than four years of political uncertainty, Brexit is finally headed towards the end game. The 15 October EU leaders summit could prove pivotal, especially as it coincides with the UK’s latest self-imposed deadline," says Jeremy Stretch, a foreign exchange strategist at CIBC Capital.

"GBP/USD will be driven by the outcome of the EU‑UK trade negotiations. EU leaders will review the negotiations at the European Council Summit (Thursday‑Friday). Meanwhile, UK Prime Minister Johnson is ready to pull the plug on the talks if no deal is reached by Thursday. GBP/USD can rally above 1.3500 in the near‑term if both parties agree on a deal," says Kim Mundy, a foreign exchange strategist with CBA.

"Under a no deal outcome, GBP/USD downside will likely be contained around 1.2500 because GBP/USD is already significantly undervalued," adds Mundy.

A report in The Times out on Friday says EU Chief Negotiator Michel Barnier would like to keep the agenda of this EU meeting as thin as possible in order to ensure no EU states can hijack the process and disrupt process.

Both EU and UK maintain a cautious optimism that a deal can be done and the most likely outcome of the EU summit is that they agree to keep talking while also adjusting Barnier's mandate.

Therefore, Sterling might find this is not in fact the week that delivers big moves.

Those watching the currency should nevertheless be aware that high-level events will be watched hawk-like by foreign exchange traders and the prospect of volatility is elevated.

"Irrespective of the UK’s latest soft deadline, we would be unsurprised should negotiations extend towards month end, or even early November. Avoiding additional disruption, via a no deal outcome, appears eminently sensible as both the UK and eurozone economies are impacted by a Covid second wave. Of course the risk of politics and political dogma colliding with macro-economic necessity cannot be totally discounted," says Stretch, adding:

"Our central case scenario remains a ‘skinny’ free trade deal. Such a result will help precipitate the market to further pare back assumptions of negative UK base rates. We continue to view negative rates as only accompanying no deal.

Sterling's domestic data calendar for the coming week is dominated by the publication of labour market figures for August on Tuesday, Oct 13.

Market consensus expects 18K people to have fallen out of work in the three month period to August, with the unemployment rate creeping up to 4.3% from 4.1% in the previous month.

Those claiming out of work benefits is expected to have risen by a substantial 100K people.

UK unemployment is likely to rise substantially over coming months as the UK government withdraws the generous furlough scheme that subsided jobs during lockdown.

But with infections rising and the government extending measures to lockdown 'hotspots' more businesses are likely to close and more jobs will be lost. Granted, the Chancellor announced on Friday the job retention scheme would be extended for areas put under local lockdowns, but this is unlikely to stop the thousands that are to fall through the net over coming months.

"The prospect of new social distancing restrictions prompted the Chancellor to today effectively restart the furlough scheme, albeit only for firms that will be required to close completely under future local or national lockdowns," says Martin Beck, Economist at Oxford Economics, adding:

"It does nothing to help those parts of the economy that are permitted to open, but left unviable by current social distancing measures, such as parts of the arts and tourism sectors. It will also leave hospitality firms outside lockdown areas in a painful halfway house of suffering revenue losses from compulsory 10pm closing times and consumer risk aversion, but not eligible for the extra support offered by the expanded JSS."