The Pound-to-Euro exchange rate was virtually unmoved last week, despite some elevated intraday volatility, confirming this to be a market that is consolidating ahead of a potentially sizeable directional breakout in coming days or weeks.

What is interesting is that Pound Sterling has been highly volatile on an intraday basis, but although it has moved a great deal the currency has never really committed to a new directional move.

Indeed, the exchange rate looks to be entrenched around the 1.10 area, and like a coiling spring it looks to be gathering energy ahead of a jump in either direction.

The trigger to the move would be a concrete signal on the direction of Brexit trade negotiations and whether the EU and UK can agree a deal before year-end.

The highlight for the week ahead will be the outcome of the October 15 meeting of EU leaders at the European Council.

Brexit trade negotiations are on the agenda and the message from the EU will likely determine the market's expectation on whether a deal is in fact possible or not.

"After more than four years of political uncertainty, Brexit is finally headed towards the end game. The 15 October EU leaders summit could prove pivotal, especially as it coincides with the UK’s latest self-imposed deadline," says Jeremy Stretch, a foreign exchange strategist at CIBC Capital. 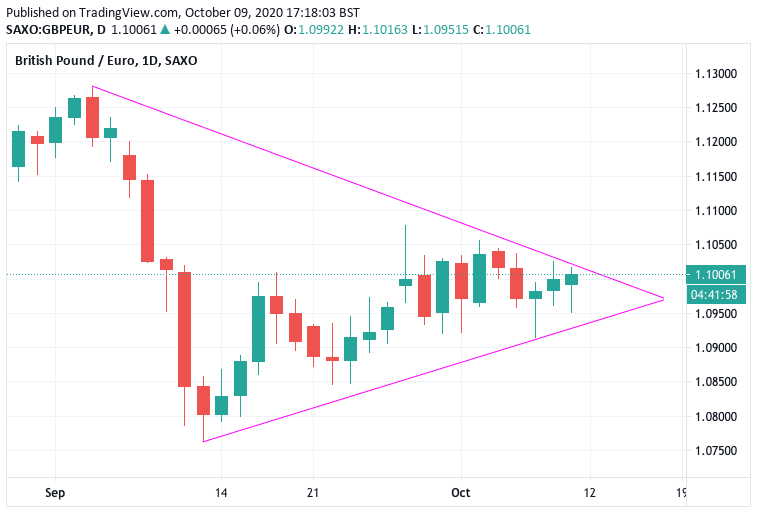 Above: The coiling spring - GBP/EUR's multi-day range is tightening as markets await news on a future EU-UK trade deal.

A report in The Times out on Friday says EU Chief Negotiator Michel Barnier would like to keep the agenda of this EU meeting as thin as possible in order to ensure no EU states can hijack the process and disrupt process.

Both EU and UK maintain a cautious optimism that a deal can be done and the most likely outcome of the EU summit is that they agree to keep talking while also adjusting Barnier's mandate.

Therefore, Sterling might find this is not in fact the week that delivers big moves.

Those watching the currency should nevertheless be aware that high-level events will be watched hawk-like by foreign exchange traders and the prospect of volatility is elevated.

"As we expect negotiations will extend into November, we do not expect next week's EU summit to be crucial," says Mikael Milhøj, Senior Analyst, at Danske Bank.

"Irrespective of the UK’s latest soft deadline, we would be unsurprised should negotiations extend towards month end, or even early November. Avoiding additional disruption, via a no deal outcome, appears eminently sensible as both the UK and eurozone economies are impacted by a Covid second wave. Of course the risk of politics and political dogma colliding with macro-economic necessity cannot be totally discounted," says CIBC's Stretch, adding:

"Our central case scenario remains a ‘skinny’ free trade deal. Such a result will help precipitate the market to further pare back assumptions of negative UK base rates. We continue to view negative rates as only accompanying no deal.

Sterling's domestic data calendar for the coming week is dominated by the publication of labour market figures for August on Tuesday, Oct 13.

Market consensus expects 18K people to have fallen out of work in the three month period to August, with the unemployment rate creeping up to 4.3% from 4.1% in the previous month.

Those claiming out of work benefits is expected to have risen by a substantial 100K people.

UK unemployment is likely to rise substantially over coming months as the UK government withdraws the generous furlough scheme that subsided jobs during lockdown.

But with infections rising and the government extending measures to lockdown 'hotspots' more businesses are likely to close and more jobs will be lost. Granted, the Chancellor announced on Friday the job retention scheme would be extended for areas put under local lockdowns, but this is unlikely to stop the thousands that are to fall through the net over coming months.

"The prospect of new social distancing restrictions prompted the Chancellor to today effectively restart the furlough scheme, albeit only for firms that will be required to close completely under future local or national lockdowns," says Martin Beck, Economist at Oxford Economics, adding:

"It does nothing to help those parts of the economy that are permitted to open, but left unviable by current social distancing measures, such as parts of the arts and tourism sectors. It will also leave hospitality firms outside lockdown areas in a painful halfway house of suffering revenue losses from compulsory 10pm closing times and consumer risk aversion, but not eligible for the extra support offered by the expanded JSS."

The Euro's domestic calendar sees German survey data for October come out on Tuesday, which should give a flavour of how the Eurozone's largest economy is faring amidst an atmosphere of rising covid-19 cases.

The highlight of the week will be the release of Eurozone inflation data on Friday October 16.

CPI for September is expected to read at -0.3% year-on-year, a deepening in deflation from August's -0.2%.

A worse-than-expected result could send the Euro lower as it would almost inevitable raise expectations for a set of aggressive monetary policy easing at the European Central Bank in coming months.