- BMO Capital Markets says "inclined to be a near-term buyer".

- As EURUSD now moves in opposing direction to faltering CNY.

- Markets on lookout for Chinese tariff retaliation, could boost EUR.

The Euro retreated from a rising Dollar Thursday, taking it back toward the two-year low established in July, after U.S. economic numbers helped to lift the greenback although the single currency is now drawing interest from one of the more bearish voices to have issued forecasts for it in recent months.

Europe's single currency was forced onto the back foot Thursday when U.S. retail sales figures emerged much stronger than was expected for the month of July, soothing market concerns about the prospect of the world's largest economy heading for a rough patch. Markets have been volatile this week after a closely watched part of the U.S. yield curve signalled the economy might now be headed for a recession.

Olli Rehn, Governor of The Bank of Finland and a rate setter on the European Central Bank (ECB) Governing Council, told the Wall Street Journal Thursday the ECB needs to announce a "significant and impactful policy package" to support the ailing Eurozone economy. He told the paper that when it comes to financial markets and their expectations, it's better to over-deliver than it is to under-deliver.

The Euro-to-Dollar rate slipped below the 1.11 handle late in the noon session, although the move had already been flagged as likely beforehand by analysts at BMO Capital Markets, who've been among the more bearish voices covering the Euro during recent months. BMO is now contemplating recommending the Euro as a buy, even though it's still expected to depreciate once beyond the very short term.

"Thus far, the 1.1150/1.1210 range we flagged yesterday for EURUSD appears to be holding, though we can't see why a raft of stronger-than-anticipated US data (particularly on retail sales and IP) would negate a test of levels sub-1.1100," says Stephen Gallo, BMO's European head of FX strategy, in a note sent to clients ahead of the U.S. data on Thursday. "We might be inclined to be a near-term buyer there." 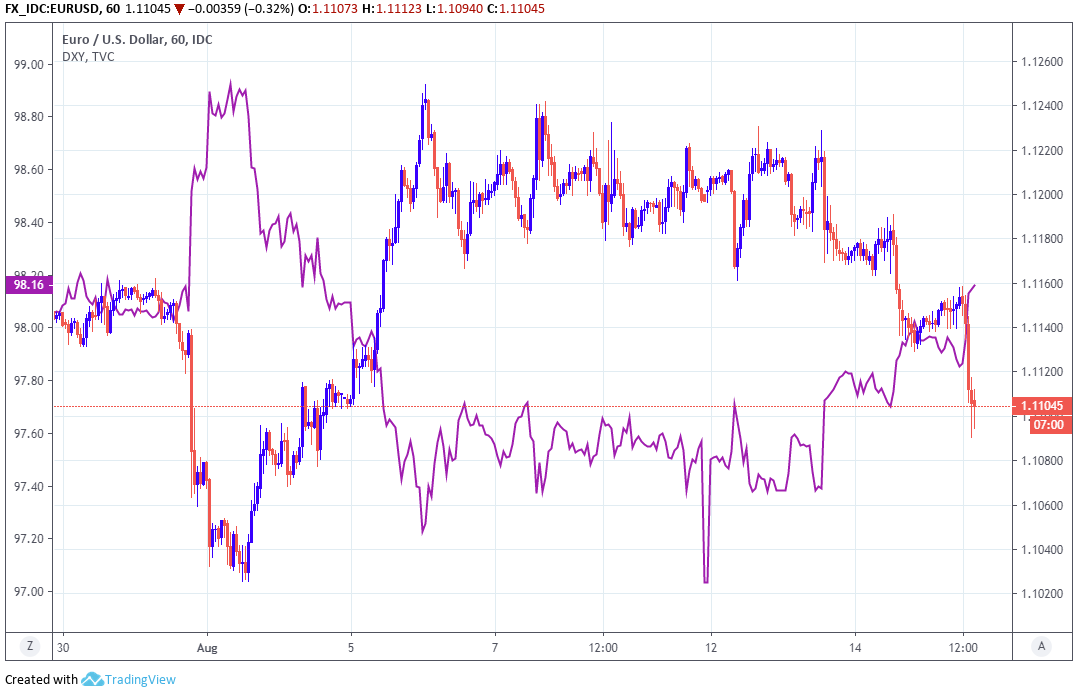 Gallo cites a newfound tendency of the Euro to rise whenever the Chinese Renminbi weakens in response to the latest developments in the trade war with the U.S., as his main motivation for wanting to buy the currency.

China is a significant market for German manufacturers so when it was clobbered by U.S trade tariffs last year, the Euro declined in sympathy with the Renminbi as markets rightly judged that Europe's largest economic engine would also hit a rough patch as a result.

Germany's economy has now contracted in two of the last four quarters, dragging Eurozone growth lower with it and forcing the European Central Bank (ECB) to begin preparing another stimulus package that could well hurt the single currency come September, but the Euro no longer falls in response to adverse headlines from China.

"The EUR tends to remain bid when the RMB is weakening and key Fed-related events are gradually coming into view," Gallo says, justifying his temptation to buy the single currency. BMO is yet to disclose details of any trade it's taken.

Recent months have increasingly seen the Euro rise in response to major adverse developments in the trade war, as well as when the Renminbi depreciates for reasons not directly resulting from anything the White House does, and vice versa. The Euro was down 0.39% against the Dollar Thursday but the Renminbi was up 0.01%.

The single currency rose sharply on August 07 when the People's Bank of China (PBOC) devalued the Renminbi and it also rose on August 01 when President Donald Trump surprised the market with another volley of tariffs intended to cover the outstanding Chinese exports not yet subject to levies.

Then, the Euro sank this week when President Donald Trump appeared to back away from the imposing the new tariffs, despite this boosting the Chinese currency. And back at the end of June, the Euro sank as the Renminbi rose in response to a short-lived truce in the trade war that was announced following the G20 meeting in Japan. 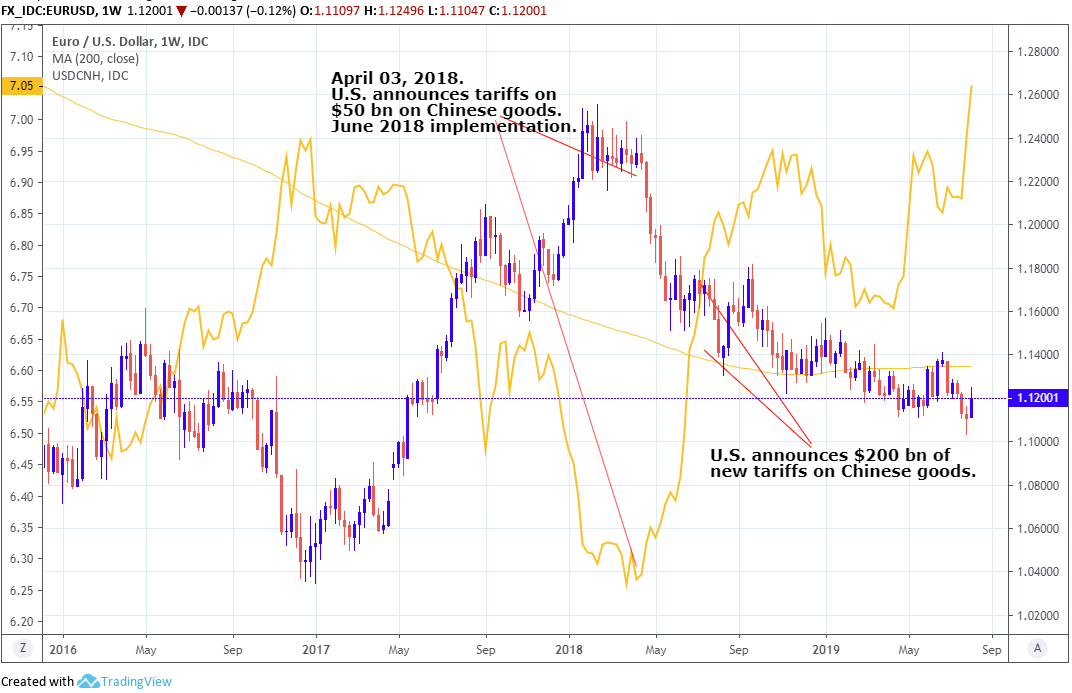 The turnaround in the correlation with the Renminbi has previously been attributed to the fact that some many investors borrowed and then sold low-yielding and cheap Euros in early July in order to buy emerging market assets on the cheap following the short-lived trade truce unveiled in Japan at the end of June.

Emerging market financial assets were sold by the bucket load last year and at times in 2019 as the escalating trade war stoked fears for global growth. This drove investors out of riskier parts of the world and into so-called safe-haven assets, creating a discount in the emerging market world, but each false dawn offering hope of a lasting truce in the tariff fight has seen investors flock back toward those higher-yielding developing world investments.

However, those Euro-funded 'carry trades' are among the first to begin losing money when financial markets turn volatile in response to unexpected developments in the trade war, or China in general. And exiting those trades requires those previously-sold Euros to be bought back. Those bets could well explain the changing behaviour of the single currency and in turn, why BMO's Gallo is contemplating buying the Euro despite also forecasting that it'll finish the year somewhat lower than it was on Thursday.

"We think the balance of geopolitical, trade and economic risks favors a move in EURUSD to 1.08 in 3M. Regardless of the way Brexit unfolds, the Eurozone's governance structure looks increasingly unwieldy, and the burden of backstopping the bloc's vulnerabilities is likely to fall squarely on the ECB," Gallo wrote, to clients earlier in August. "We feel that the costs of "Eurozone survival" are increasing and will be reflected in some combination of political tension, EUR weakness and limited nominal GDP growth."

BMO has been forecasting the single currency would fall to 1.10 against the Dollar this month and is still looking for it to drop to 1.08 by the end of November, where it's projected to remain as an average at least until the end of August 2020. Previously, BMO was looking for the single currency to end 2019 somewhere between 1.09 and 1.10, before rising to 1.13 early in 2020.