- New downward slope of yield curve points to trouble ahead.

- And as speculation of a looming German recession mounts.

The Pound-to-Dollar rate handed back earlier gains Wednesday after the outlook for the global economy appeared to darken further when the U.S. bond yield curve inverted for the first time since the financial crisis, herding investors toward the greenback and other so-called safe-haven currencies.

U.S. 10-year bond yields fell to 1.6% during Wednesday trading, taking them beneath the 1.61% yield offered to buyers of two-year treasury bonds and marking what is known in financial parlance as an inversion of the so-called yield curve. The 'curve' refers to the cost of borrowing over the full breadth of maturities available, with the gap between the one-month and 30-year bonds spanning what would be the X axis on any graph.

With the cost of U.S. borrowing over 10 years  now lower than the cost of two-year finance, the curve has become downward-sloping as bond markets signal that investors see the outlook for the economy as having turned darker on Wednesday. In other words, investors see U.S. interest rates in 10 years time as likely to be lower than those prevailing over the next two years.

The U.S. curve has not inverted since 2007, immediately before the global financial crisis and subsequent recession. However, it was not only the closely-watched U.S. curve that inverted Wednesday because the very same thing happened in the UK bond market. Such shifts in bond yields are widely said to portend a turn for the worse in the economy, with many claiming that a recession could be near in both the UK and U.S.

"We got bad economic news out of China, more bad news out of Germany, even worse Industrial Production data for the Eurozone and an inversion in the 10s2s yield curve in the UK.  This saw yesterday’s “risk-on” move start to unravel during the European morning, which brought back broad demand for USD. Then we got the headline that everybody’s been waiting for…the widely followed US 10s2s treasury curve has finally inverted," says Eric Bregar, head of FX strategy at Exchange Bank of Canada. 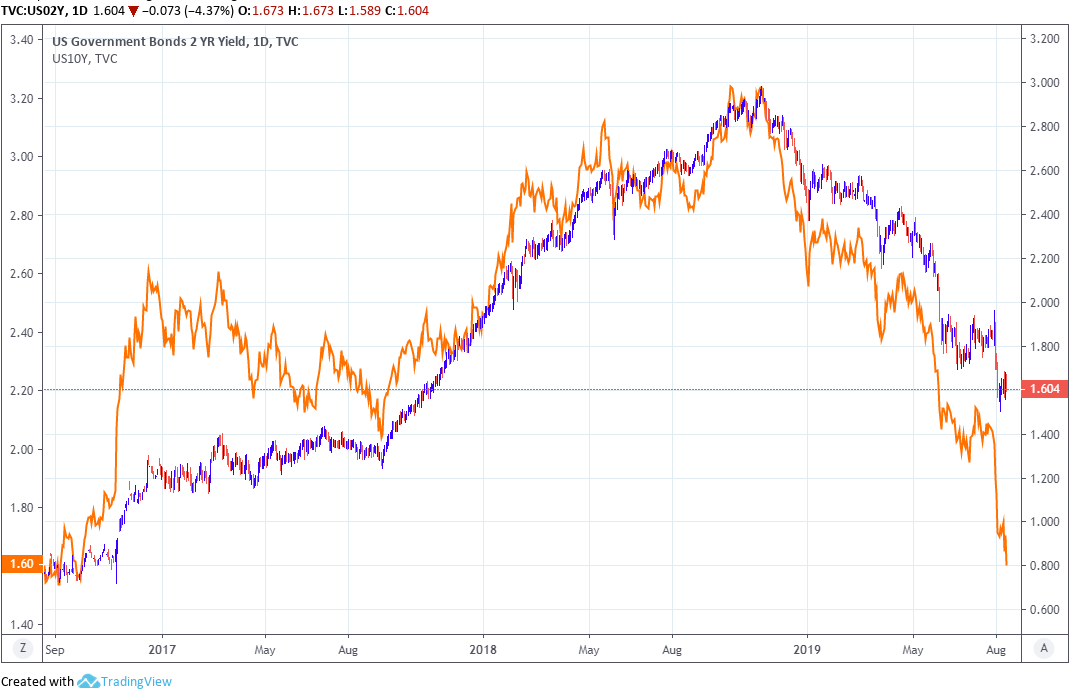 "The 3mo10yr curve has been inverted for some time already but the fact that 2s10s has also gone this way is a massive red warning light for the US economy. It’s the first time it’s happened since 2007. Meanwhile the 30-year has slumped to a record low. The market is saying the risks are tilted very much to the downside. We are in a new phase of the cycle for markets now," says Mark Wilson, chief market analyst at Markets.com.

Bond yields were egged on in their descent Wednesday by official data revealing the German economy is teetering on the brink of recession, which came right after a series of poor industrial and retail sales numbers showed China's economy struggling during July. The decline continues a trend lower that's been in place since late 2018 when it became clear the White House trade war with China, among other things, is hurting the global economy.

The safe-haven Dollar, Japanese Yen and Swiss Franc were all in demand following the inversion Wednesday, while risk currencies like Pound Sterling and the Australian Dollar were on the back foot, as investors contemplate their next moves in an increasingly downbeat environment.

Stock markets and oil prices also extended recent losses while the price of gold rebounded from a brief slump seen on Tuesday.

"This yield curve inversion is a sell signal for risk assets and should put extra pressure on equities," Wilson says. "To recap well-worn turf, this inversion been a reliable indicator of recession many times in the past (see chart highlighting the last three), calling seven out of the last nine. There is undoubtedly a chance of this, although we must caution that so far the US data has been pretty sturdy in the face of global headwinds and the trade policies of the White House." 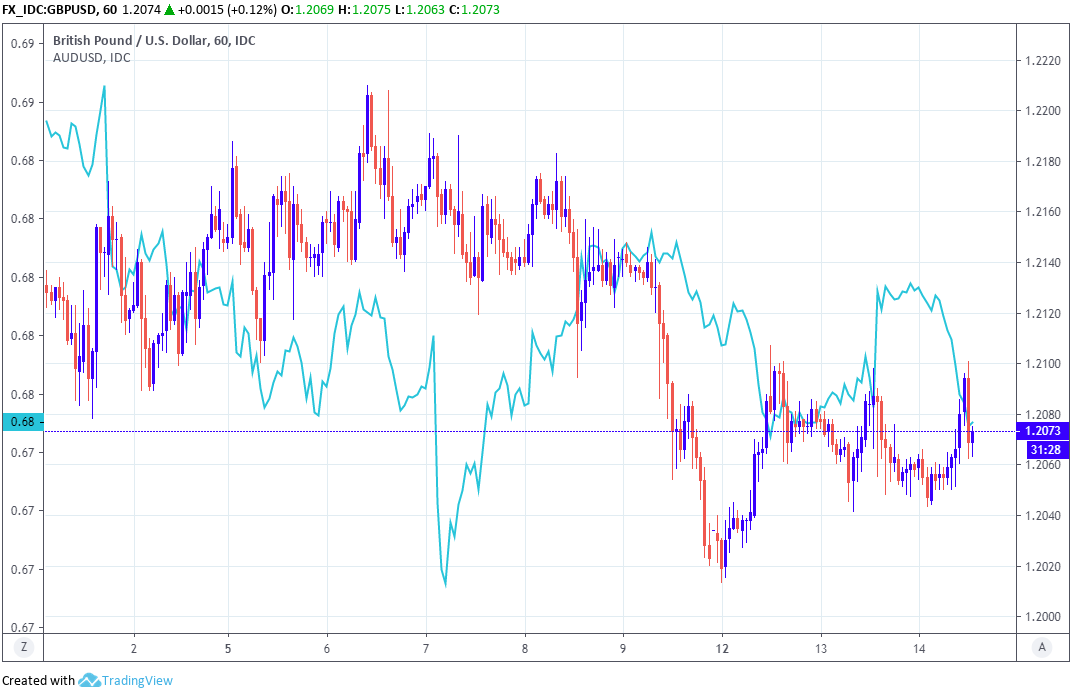 The Federal Reserve (Fed) already cut its interest rate bu 25 basis points to 2.25% in July, citing concerns that the ongoing global economic slowdown could soon blowback into the U.S., although it's expected to reduce U.S. borrowing costs on a further two occasions before the year is out.So far though, the U.S. economy has slowed only modestly, and by much less than other economies like the Eurozone, UK and others.

Those cuts would normally be enough to push the Dollar lower but because their impetus comes from global ailments, the greenback has drawn support from safe-haven-seeking flows of capital fleeing more riskier parts of the world. The only 'risk' currency the greenback hasn't risen against is the Canadian Dollar, which has benefited from a Bank of Canada interest rate that's not yet expected to come down from the 1.75% level reached back in 2018.

"It is important to point out that an inverted yield curve has given false signals in the past on possible US recessions (around the Russia/LTCM crisis in 1998 for example), while other countries have experienced prolonged yield curve inversion in the past without recession – the UK for example through much of the 1990s. As such it is important to emphasise the obvious point there is no inevitability of recession," says James Knightley at ING.

The Pound received a boost from higher-than-expected inflation numbers Wednesday, although gains quickly faded later in the session as investors focused on the possible implications of the inverted yield curve as well as the next likely development in the Brexit process. Speculation is mounting over the odds of whether a general election can be forced by opposition MPs in parliament before a potential 'no deal' Brexit at the end of October. Both outcomes would be damaging for the Pound.

"Since curve inversion is usually seen as a precursor to recession, it is no wonder that the money market continues to point to a BoE rate cut next year," says Jane Foley, head of FX strategy at Rabobank. "While economic news is a focus for the pound, for most of this year it has been secondary to the political wrangling in the UK. The current summer parliamentary recess is calming the news flow from Westminster. However, there is good reason to suspect that this will step up when UK politicians re-enter the fray on September 2." 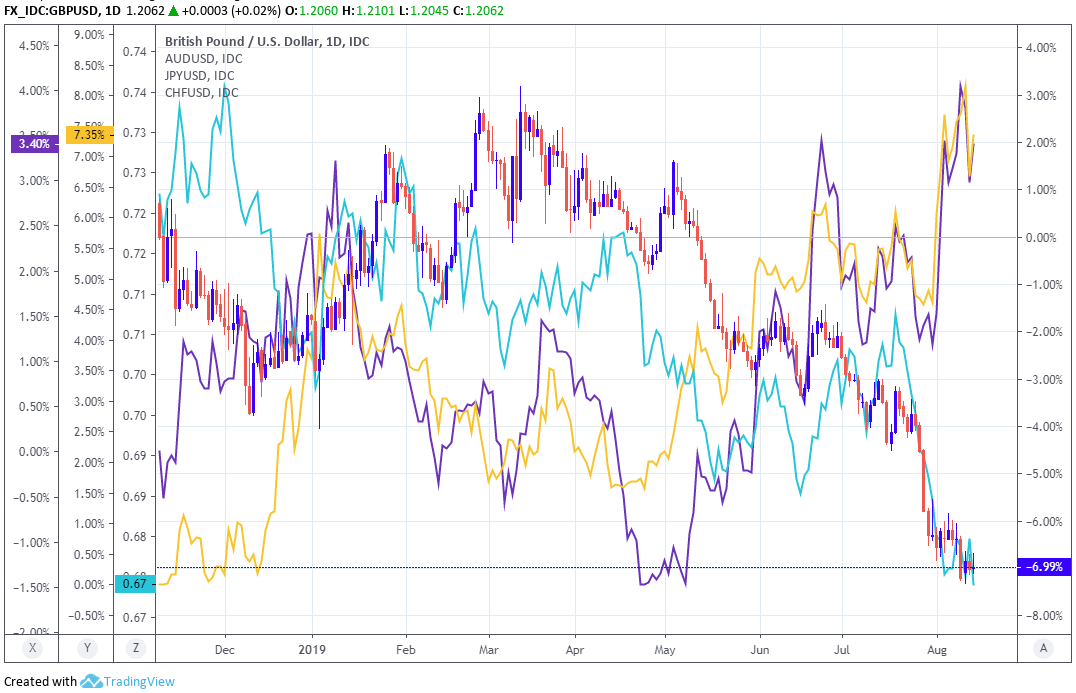 Above: GBP/USD at daily intervals, and AUD/USD (blue), JPY/USD (yellow) and CHF/USD (purple).

German GDP growth was -0.1% for the three months to the end of June, Destatis said on Wednesday, which means the German economy grew by just 0.4% in the year to the end of June 2019 after taking account of the third-quarter contraction seen back in 2019.

A slowing Chinese economy and erratic export demand from the Brexit-transfixed UK were seen behind Wednesday's figures.

Those numbers landed on the newswires just hours after a series of numbers from China raised further concerns about the health of the world's second largest economy, which is struggling beneath the weight of White House trade tariffs. Around $250 bn of China's annual exports to the U.S. are subject to a 25% tariff and a large portion of its remaining $300 bn in annual trade is set to be hit by a 10% tariff by December 15 at the latest.

Chinese industrial production growth slumped to an annualised 4.8% during July, down from 6.3% previously and when the market consensus was for an increase of 6%. Fixed asset investment growth also declined from 5.8% to 5.7%, although the fall in Chinese retail sales was the steepest of all. Sales growth was just 7.6% annualised last month, down from 9.8% previously and when markets were looking for an increase of 8.6%.

"President Trump blinked again yesterday, delaying tariffs on some $150B-worth of Chinese consumer goods," says Ian Shepherdson, chief economist at Pantheon Macroeconomics. "The climbdown over the China tariffs does not mean a trade deal is now near, not least because China's authorities currently face a much bigger problem, namely, the challenge to their legitimacy in Hong Kong, and that will take precedence."