- Some still go into effect in Sept but some cancelled, others delayed.

The Dollar surged higher Tuesday, taking so-called risk assets upward with it, after the U.S. Trade Representative said it would scale back the list of Chinese products due to be subject to new tariffs from September 01.

The Office of the U.S. Trade Representative said Tuesday that certain products will now be removed from a list of Chinese export goods, worth more than $300 bn each year, that were due to be hit with a 10% tariff from September 01. It cited reasons of health, safety, national security and "other factors".

In addition, tariffs on some of the remaining goods that have not been excluded will be delayed until December 15, including cell phones, laptop computers, video game consoles, computer monitors and some toys as well clothing items. Some tariffs may still go into effect in September, although it's not clear how far reaching they'll be. 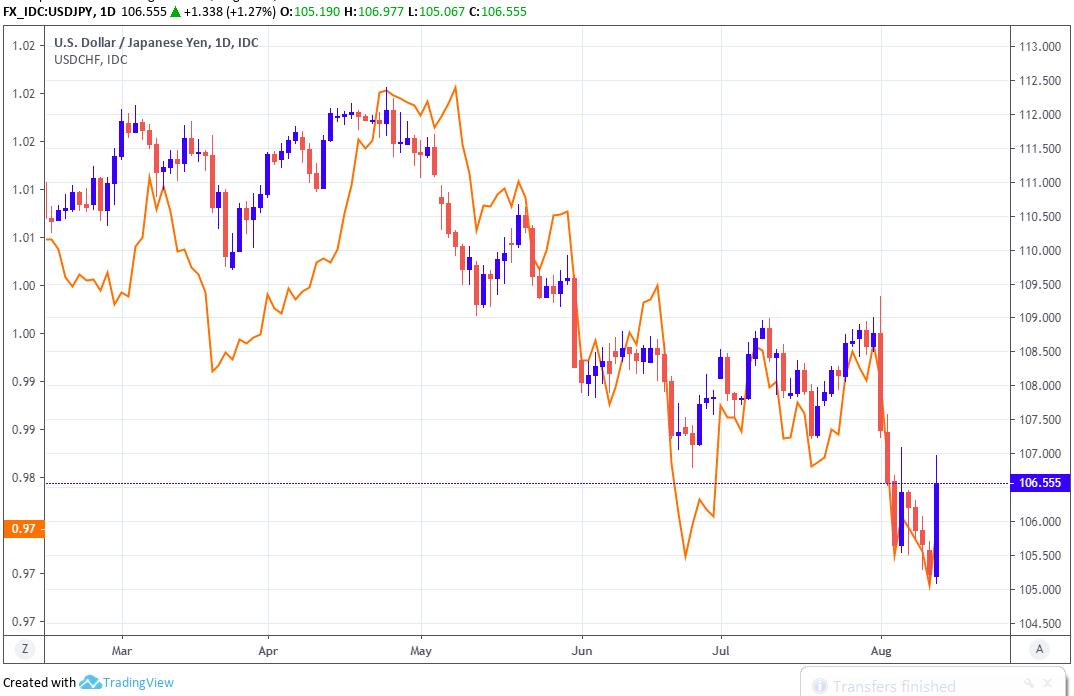 "Delay on some of the US tariffs on China is positive news for USD vs low yielding FX such as JPY, EUR and CHF. On the flip side, the dollar should reverse some recent gains vs higher beta G10 FX (AUD) and EM currencies for now. Still, the lack of visibility on trade wars means that this should not be seen as a long-lasting trend," says Petr Krpata, a strategist at ING.

The apparent step back from the brink of another escalation in the trade dispute between the world's two largest economies went down a treat in financial markets, prompting a recovery of the Dollar relative to so-called safe-havens like the Yen and Swiss Franc. It also enabled riskier commodity currencies like the Aussie and New Zealand Dollars to recover from earlier losses, while boosting the price of oil and global stock markets.

"While the positive sentiment is also spilling over into GBP (mainly on the EUR/GBP cross), in our view sterling should be the last currency via which one should position for a positive shift in global risk appetite. We retain a strong view that any GBP upside is a fade given the rising probability of early elections or a hard Brexit, with both being bad news for GBP," Krpata adds.

Delaying the implementation of new tariffs on consumer goods until mid-December could spare American households the experience of higher prices in the shops during the runup to Christmas, but the decision may also serve another purpose for the White House because December 15 is the day after the Federal Reserve's (Fed) final interest rate decision of the 2019. 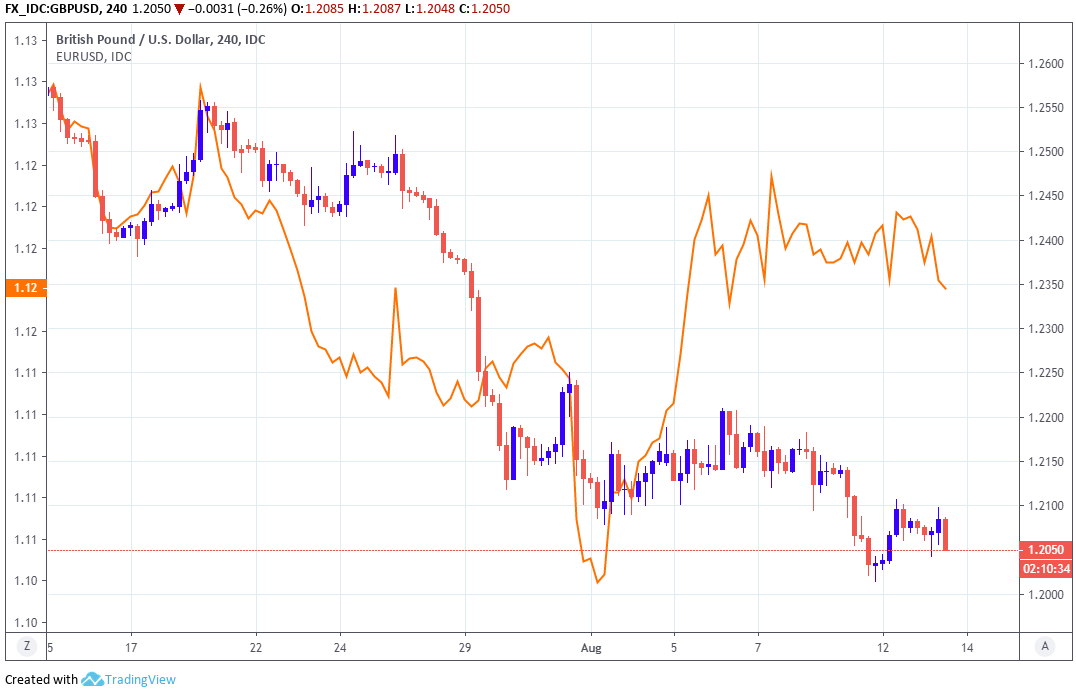 The 10% levy for China's remaining $300 bn of exports to the U.S. was announced on August 01, immediately after the Fed cut its interest rate by 25 basis points to 2.25% on July 31 in a move that was criticised by President Donald Trump for not being enough. Trump has repeatedly hit out at the Fed for having taken the wind from the economy's sails by raising its interest rate four times in 2018.

Trump has continued to urge additional rate cuts from the Federal Reserve since July while the bank itself has told markets that it's concerned about the outlook for the global economy and the prospect of a worldwide slowdown coming back to crimp U.S. growth. The U.S.-China trade war has, after all, hurt economies elsewhere in the world more than it has done the two protagonists.

"Conveniently that’s just after the Fed meeting," says Mark Wilson, chief market strategist at Markets.com, referring to December 15. "Can’t wait for the Fed this September? Don’t worry, we’ll just pull out something about trade to grease the wheels of this market. I buy the argument that Trump didn’t like the way markets have turned and thought he should do something about it. Was he worried about the CPI print? Possibly; it certainly has complicated things for the Fed, but ultimately it just looks like it was an easy win for Trump."

President Trump has criticised the Federal Reserve for its interest rate rises not only because they've ratcheted up the pressure on U.S. companies and consumers just as he's attempting to 'make America great again', but also because they've lifted the Dollar substantially since the end of the first quarter of 2018. And the main thing the analyst community says would be necessary to bring the Dollar back down to earth is an economic recovery in Europe and elsewhere combined with more Fed rate cuts. 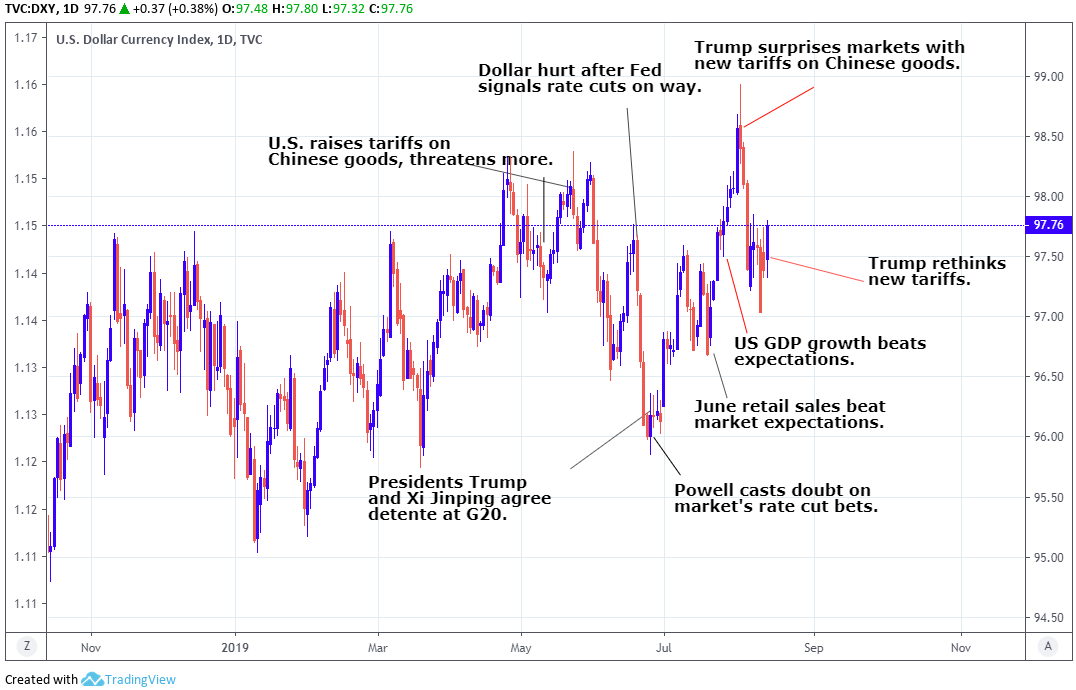