- Investors buy back previously sold EUR as other trades sour.

The Euro advanced against a weaker Dollar Wednesday but those gains will soon give way to fresh losses, according to strategists at BMO Capital Markets, who say the single currency will be buffeted in the months ahead by European Central Bank (ECB) policy and the Eurozone's "rising cost of survival".

Europe's unified unit has been boosted this week by the effect of volatility in the U.S. Dollar and weakness in the Chinese Renminbi, both of which have riled global financial markets and prompted an exodus of investors from the emerging market world. Previously, investors had borrowed and then sold cheap Euros in order to bet on increases in other currencies with the proceeds, leading the Euro to rise as some of those bets were unwound this week.

BMO Capital Markets says these gains won't last for long and that once they dissipate, the Euro will be left with very little to keep it propped up. Stephen Gallo, the Canada-headquartered lender's European head of FX strategy, has told clients there's "absolutely no fundamental reason" for investors to want to buy the currency right now after downgrading BMO's forecasts for the Euro over the next 12 months.

"We think the balance of geopolitical, trade and economic risks favors a move in EURUSD to 1.08 in 3M. Regardless of the way Brexit unfolds, the Eurozone's governance structure looks increasingly unwieldy, and the burden of backstopping the bloc's vulnerabilities is likely to fall squarely on the ECB," Gallo writes in a note to clients. "We feel that the costs of "Eurozone survival" are increasing and will be reflected in some combination of political tension, EUR weakness and limited nominal GDP growth." 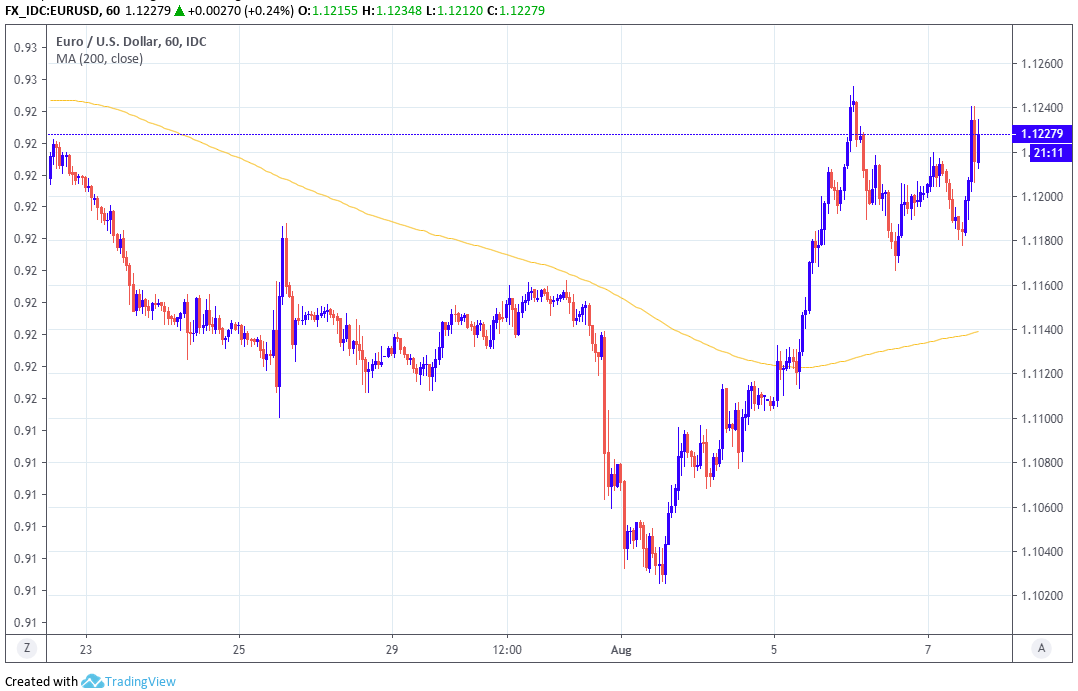 The Eurozone economy has been badly damaged by the U.S. trade war with China, which has doubtless at least contributed to a rapid deceleration in GDP growth in the last year. The economy grew 0.2% in the second quarter, down from 0.4% in the first, and the European Commission forecasts it'll expand by just 1.2% in 2019 as a whole. That forecast implies a fall from 1.8% last year, which itself marked a reduction from 2.3% in 2017.

Growth has slowed more in the Eurozone than it has in either the U.S. or China as a result of the trade conflict, with the German industrial sector having fallen in the second half of 2018 into a recession that has only grown deeper as the 2019 year draws on. Data released Wednesday showed German industrial production falling by 1.5% in June, by 1.9% for the second quarter overall and by 5.2% for the year to the end of June.

Analysts are Barclays said Wednesday that this number could mean the German economy shrank by 0.2% in the second quarter, which might leave the recent Eurozone  figure vulnerable to a downgrade when the second estimate is released on August 14. BMO's Gallo was already expecting the European Central Bank to be keen to provide support to the Eurozone economy in the coming months although Wednesday's data strengthens the case for it.

"We expect the ECB to reduce its deposit rate by 0.10% in September, introduce "tiering" for excess reserves and launch a new round of asset purchases. We anticipate a cut in the main refinancing rate to -0.10% in March 2020," Gallo writes. "No deal" Brexit risk is high, given the political backdrop in the UK and the unwillingness of Brussels to re-negotiate. On the whole, Germany could urge even more fiscal spending restraint given 1) a "no deal" Brexit and 2) the uncertain global climate." 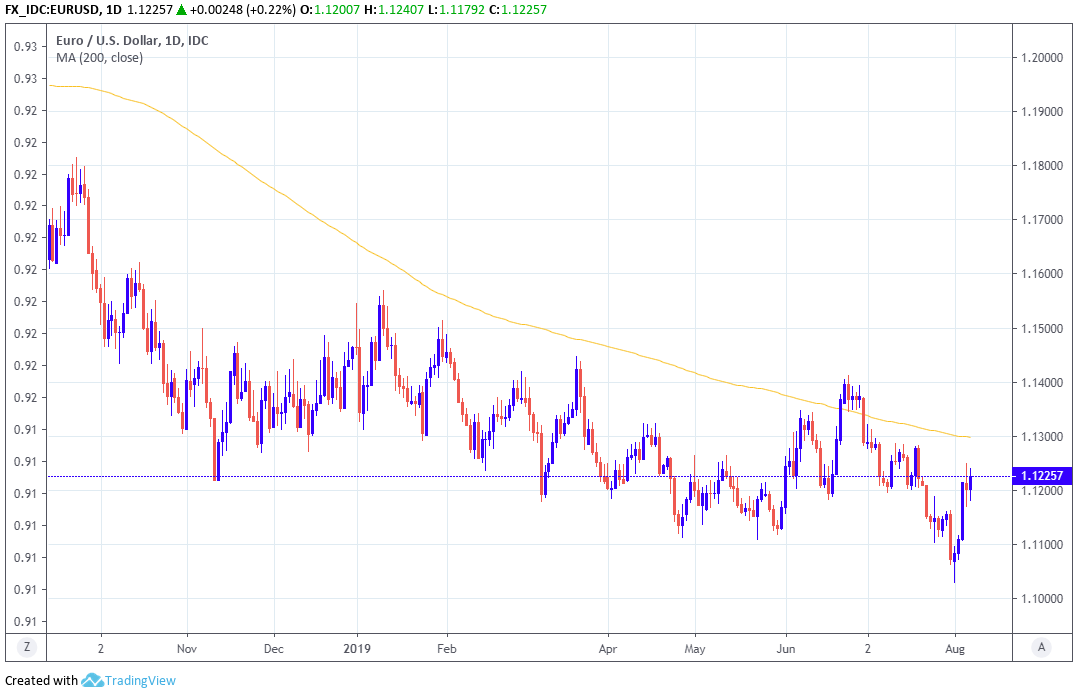 ECB President Mario Draghi said in July the Eurozone growth outlook is getting "worse and worse", before singling out manufacturing and those countries where manufacturing is important for growth as suffering the greatest. Those comments came after the chief policymaker told markets he'd tasked ECB staff with devising a "tiered system for reserve remuneration" and considering "options for the size and composition" of a new quantitative easing program.

Financial markets have rapidly coalesced around the idea the bank will take action in September in order to revive the economy, in the hope of one day meeting its long-elusive inflation target, although investors widely claim that with Eurozone interest rates already at or below zero the ECB has all-but run out of bullets to fire. As a result, the EUR/USD is up 0.02% for the last month, rather than having fallen, while the trade-weighted Euro has risen nearly 2% due to weakness in other currencies.

These gains for the single currency will do little to make Eurozone exports more appealing to buyers elsewhere in the world and will ultimately work against the ECB by making imports cheaper for Eurozone companies and consumers to buy. Cheaper goods will reduce prices on the shelves in shops, which is the opposite of what the ECB wants to achieve, while also weakening the economy because imports are a subtraction in the calculation of GDP.

"Although carry trade unwinds are providing some support to the EUR, we can see absolutely no fundamental reason to be buying the currency. The ECB will be especially concerned about the 1.7% appreciation of the broad NEER since late-July given the inflation and growth dynamics in the bloc," Gallo says. "It's a tough call to trade EURUSD in this environment, despite its bearish fundamentals, but the "gutsy" trade would be to sell it at 1.1190 or so with a stop at 1.1400 and a target of 1.0800." 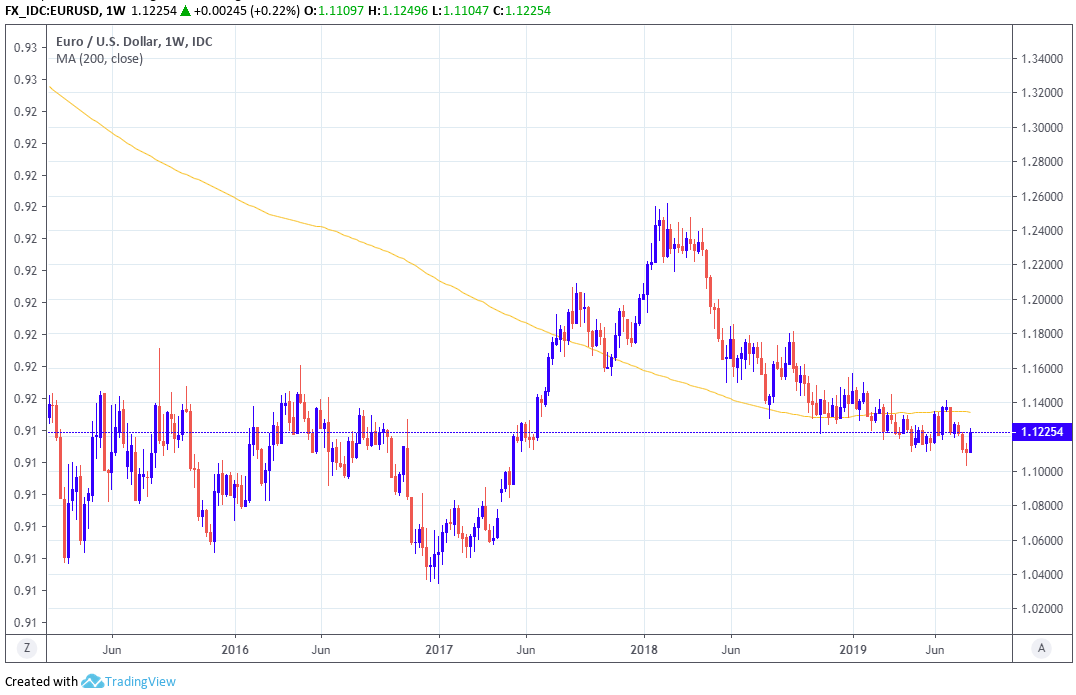 The ECB has called on many occasions for Eurozone governments to loosen their purse strings in order to support their economies, which would help the Frankfurt-based institution to meet its inflation target, although the probability of this could be low because European Union rules are forcing many countries in the bloc to reduce their public spending, budget deficits and debt piles.

Those constraints mean that any increase in spending by Eurozone governments risks being too little and coming far too late to prevent growth and inflation falling further, which could leave the ECB with little option but to take radical action. And any radical steps would be almost sure to see the Euro moving lower.

BMO forecasts the single currency will fall to 1.10 against the Dollar this month and 1.08 by the end of November, where it's projected to remain as an average at least until the end of August 2020. Previously, the bank had been looking for the single currency to end 2019 somewhere between 1.09 and 1.10, before rising to 1.13 early in 2020.