Germany's key industrial sector shrank in June, according to fresh data, leading to growing speculation that the economy could enter recession in 2019.

German industrial production in June fell 1.5% on a month-to-month basis reports Destatis, defying analyst expectations for the contraction to read at 0.5%.

The major driver for the decline in Germany's industrial sector was a broad-based decline in manufacturing activity, which plunged 1.8% month-on-month.

Activity in the construction sector rose slightly (+0.3%) after weaker readings over the last three months, while energy output contracted further (-1.6%).

"Surveys suggest the German economy is heading for a further contraction in July, raising fears that Europe’s biggest economy may be heading for a recession," says Fiona Cincotta, Senior Market Analyst at City Index. 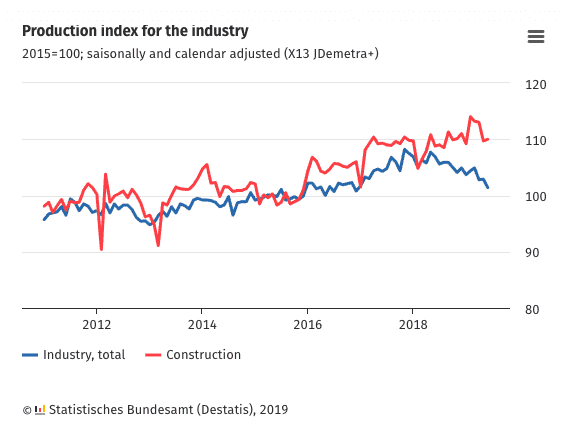 For an economy to be officially considered to be in recession it is required to record two successive quarters of negative GDP growth.

German first-quarter growth stood at 0.4%, therefore it will require the second- and third-quarters to print negative growth before the economy can officially be declared to be in recession.

Economists at UniCredit Bank have crunched the numbers following the data release and have revised their quarterly GDP growth forecast for second-quarter 2019 lower, they now expect a 0.1-0.2% quarter-on-quarter decline.

"While the risk of a negative surprise in 3Q19 has increased, we think that discussions about a recession are premature, as there are some indications that the global economy may bottom out in 2H19. However, if political risks materialise they could thwart an anticipated moderate pick-up toward the end of the year," says Dr. Thomas Strobel, Economist at UniCredit Bank in Munich.

The German economy is heavily reliant on the export of manufactured goods, and global trade tensions have understandably had a negative impacted on demand for these goods.

The U.S.-China trade spat has widely noted to be a core reason for a slowdown in global economic activity, which leads Germany particularly exposed.

Whether or not Germany enters recession in 2019 will therefore have much to do with how the global picture evolves from here.

"The Bundesbank global leading indicator has stabilised recently, as have other leading indicators, including the OECD leading indicator for China, which seems to have passed its trough. Moreover, it is unclear how much of additional Chinese fiscal and monetary stimulus will be in the pipeline in the coming months to support global growth. Hence we continue to expect the German economy to show some moderate pick-up in 2H19 (possibly towards the end of the year)," says Strobel.

Low water levels on the Rhine in 2018 made parts of it unnavigable, which in turn had a major impact on the German supply chain.

The Rhine runs through Germany's industrial heartlands and is a key mode of transport for businesses.

Low water levels in 2018 saw production to come to a halt in places, leading to a contraction in the German economy in the third quarter of 2018 and a paltry increase in activity in the fourth quarter meant the economy narrowly missed falling into recession.

The summer heatwave seen in 2019, and below-average rainfall in Germany, could see the river impact the economy once more.

There are other risks that could well tip the economy into recession, and many of these are political in nature.

Trade tensions between the U.S. and China are showing with no signs of abating. Last week President Donald Trump announced tariffs on an additional $300bn worth of Chinese goods.

A slump in the value of the Chinese Renminbi in response reminded markets that the Chinese could retaliate by letting their currency fall.

The problem with a weaker Renminbi is that it could further sap Chinese demand for German-made goods.

Then there is Brexit.

"The increased probability of a hard Brexit after UK Prime Minister Boris Johnson said the UK government’s “central scenario” is now to leave the EU without a deal, puts a recovery of Germany’s export industry at risk. In 2018, the UK was the fifth largest single German export market (after the US, France, China, and the Netherlands," says Strobel, adding:

"If these risks materialise, they could thwart an anticipated moderate pick-up in 2H19 and trigger further downward revisions to our already cautious growth forecast of 0.6% for 2019."