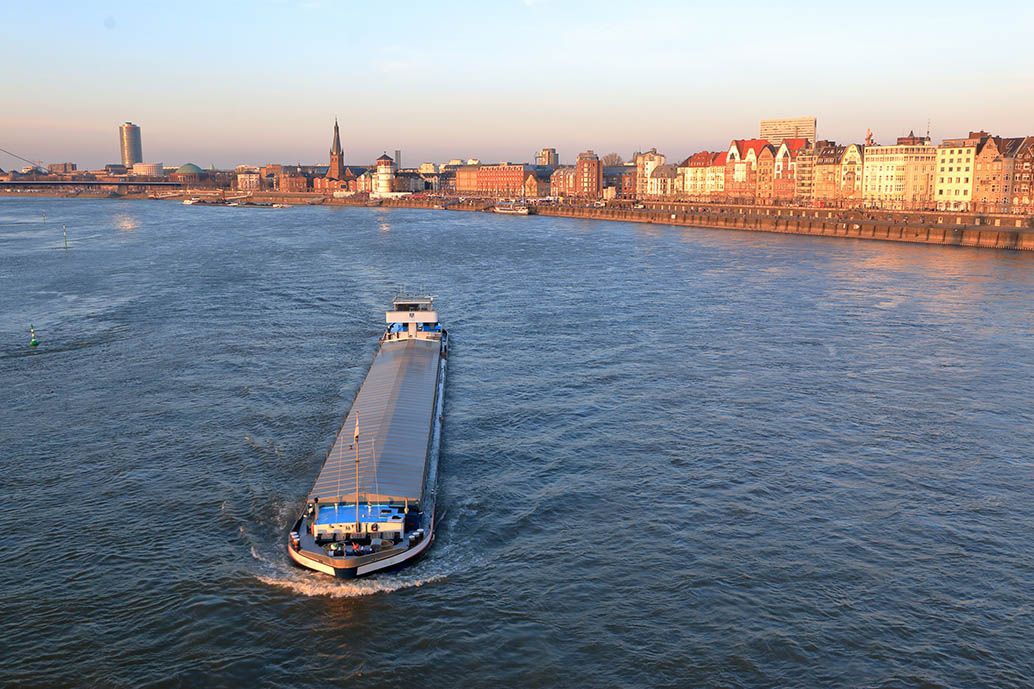 Above: Water levels on the Rhine have recovered from their lowest levels since the 1920s in early 2019, restoring German supply chains. Image (C) Adobe Images.

Data out of Germany today confirms Europe's largest economy narrowly avoided falling into a technical recession at the turn of the year, but one economist tells us improvements in performance are likely in 2019.

Destatis reports German GDP flatlined at 0% quarter-on-quarter in the final quarter of 2018, markets had been looking for growth of 0.1% to be reported. The year-on-year growth rate for the final quarter 2019 was at 0.9%.

The economy contracted 0.2% in the third quarter of 2019, and two successive quarters of contraction mark a technical recession. 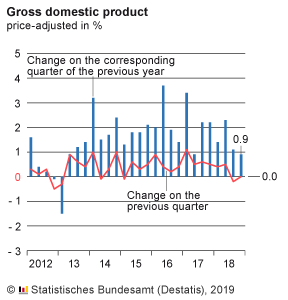 "The year 2018, which started off with expectations of the best growth performance since 2011, ended with a big stinker," says Carsten Brzeski, Chief Economist at ING Germany.

Destatis reports developments in foreign trade did not make a positive contribution to growth in the fourth quarter. According to provisional calculations, exports and imports of goods and services increased nearly at the same rate in the quarter-on-quarter comparison.

"The weak performance of the German economy in the second half of the year is the result of (too many) one-offs, surfacing structural weaknesses and external uncertainties. Just think of cars, low water levels in main rivers, the trade conflict between the US and China, Brexit or the lack of investment in digital and traditional infrastructure, delays of railways and airlines as well as hardly any significant new structural reforms in the last ten years. What a list!" says ING's Brzeski.

Concerning the outlook, Brzeski is more optimistic for 2019 saying the economy has not necessarily witnessed the end of a long positive cycle.

"Looking ahead, there are still plenty of reasons to remain optimistic. Not only were there some encouraging data signals under the surface of recent macro data, there are also fundamental reasons to remain optimistic: the labour market is strong, consumers’ willingness to spend at its highest level since April last year, order books are still richly filled and companies still report assured production close to record highs," says Brzeski.

Concerning water levels, economists are watching the levels of the Rhine which is a key German transport artery. Water levels in the Rhine fell to their lowest levels since the 1920's ensuring a dramatic decrease in shipping.

This in turn immediately hit supply chains across Germany and almost certainly contributed to economic weakness.

"What do Rhine water levels and German growth have in common? They both appear to have fallen in the second half of 2018. Over the summer and into the autumn, the Rhine’s water depth reached levels last seen in the 1920s, creating significant challenges for its use as a transport channel," says Nikki Howes, Investment Associate at Heartwood Investment Management, the asset management arm of Handelsbanken in the UK.

"Since the river is essential for the movement of goods within Germany, supply chain issues emerged almost immediately, including a shortage of imported raw materials and commodities – especially challenging for Germany’s flagship industrial and manufacturing sectors as well as German households," adds Howes.

As the below graph shows, levels have risen through the turn of the year, and we would expect shipping volumes to recover and in turn restore supply chains.

"The recent pick-up in orders in the automotive industry and favourable financing conditions in the entire economy also bode well for at least solid industrial and investment activity in 2019. Add to this the positive fiscal stimulus provided by the government and there is a good counterweight to the latest drop in sentiment," says ING's Brzeski.