The Pound-to-Euro exchange rate has recovered losses suffered earlier in the week but is in danger of unravelling again and falling to March lows in subsequent weeks, according to a technical view of the market.

The exchange rate could come under pressure if the headline EUR/USD pair starts to improve and should Sterling come under fresh pressure against the Dollar.

Sterling received a bid Thursday after IHS Markit PMI surveys rose faster than was expected for the month of May, indicating the potential beginnings of an economic recovery might not be far off. The gains in Sterling prompted a recovery by the Pound-to-Euro rate back above an important technical support level.

Earlier gains saw the Pound lifted back above the 38.2% Fibonacci retracement level of the March-to-May rebound at 1.1148 that had been under threat during the overnight session, but the outlook is growing decidedly bearish for Sterling and at a point when the Euro-to-Dollar rate is increasingly trading with an upside bias.

This could see the aforementioned level under pressure again, which would put the 50% retracement level at 1.1030 into focus: 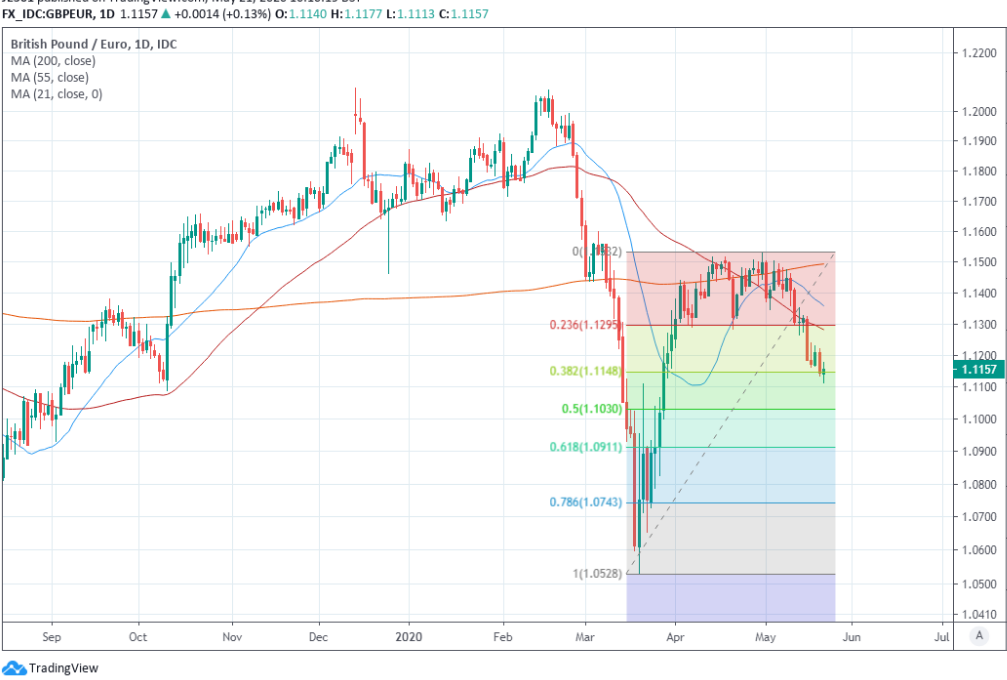 If the Pound comes under pressure against the Dollar, we would expect to see losses start to emerge against the Euro too.

"Sterling continues to struggle. We have recently been discussing the importance of the rally breaking through the overhead supply of the old April and early May lows. The rebound faltering Tuesday at $1.2295, closing lower yesterday and falling back again today is a worry for Cable bulls now," says Richard Perry, an analyst at Hantec Markets. "We see further weakness to test $1.2000 area once more in due course."

This could mean trouble ahead for the Pound-to-Euro rate because the exchange rate is effectively an amalgamation of GBP/USD and EUR/USD, which was testing its 200-day moving average around 1.1014 Thursday but is tipped to take run at 1.1240 in the event that it can overcome that average on the charts.

The Pound would hit 1.0714 against the Euro if the Pound-to-Dollar rate falls to 1.20, in line with a growing number of analyst forecasts, at the same time as EUR/USD is testing the 1.12 handle. 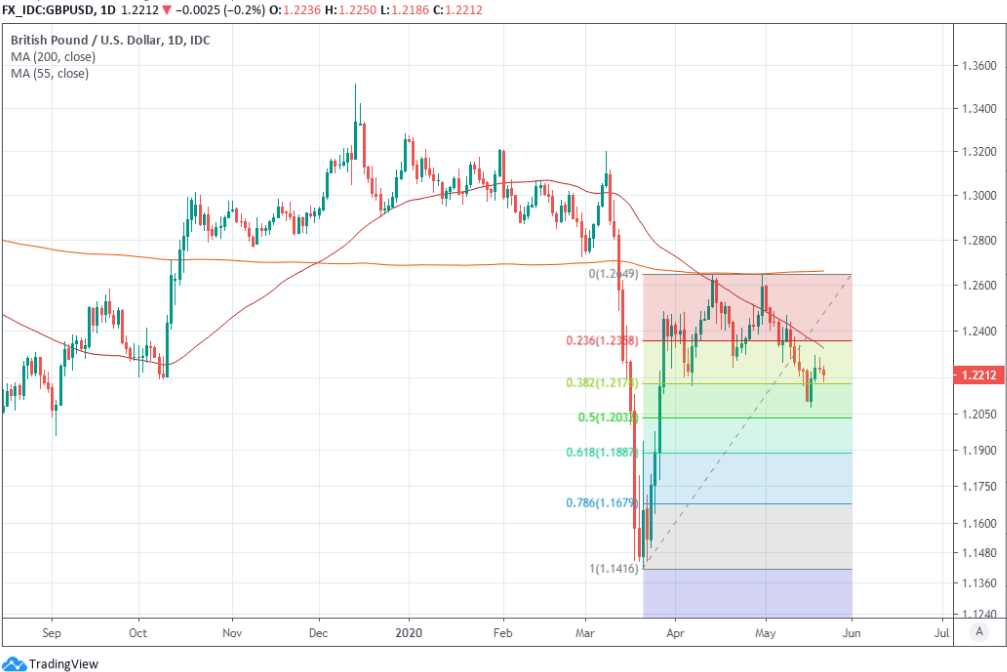 The above kinds of levels not seen since the March crisis period, although technical analysts at Commerzbank have been watching them working their way through the pipeline for a while now and are also forecasting that Sterling will fall even lower in subsequent weeks.

"EUR/USD is sitting just below the 200 day moving average and the current May high at 1.1015/19. A close above here (favoured) is needed to regenerate upside interest to the 1.1240 December peak and beyond," says Karen Jones, head of technical analysis for currencies, commodities and bonds at Commerzbank. "GBP/USD remains directly offered below the 55 day ma at 1.2338 and attention is on the 50% retracement of the March-to-April advance at 1.2030 below which lies the minor psychological 1.2000." 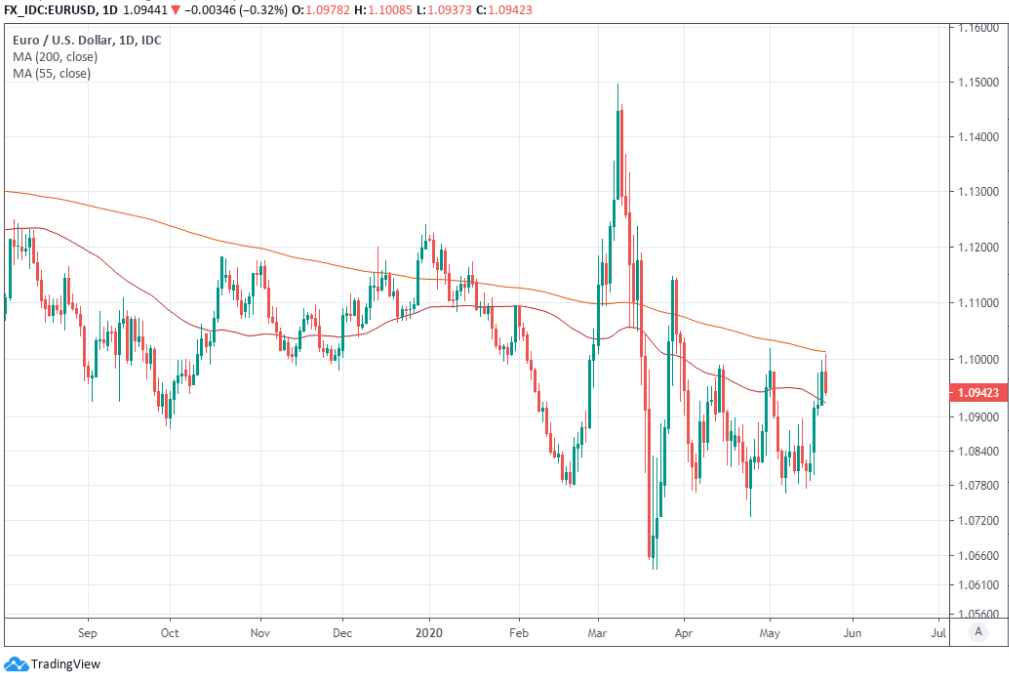 These are scenarios that could play out before month-end although Pound Sterling could come under more pressure as the June 18 BoE and European Council meetings draw near. There the BoE is expected to increase its own QE programme while the EU meeting might see Prime Minister Boris Johnson incite 'no deal' Brexit fears.

The BoE needs a weaker currency which might explain why Governor Andrew Bailey told the Treasury Select Committee this week that he's changed his views on negative rates and now considers them part of the bank's toolbox, which wounding Sterling. Reiterating or expanding on those comments in June would compound the Sterling weakness that results from any QE increase.

"We view the market as having recently based and our target is .9060. The base should remain valid while the cross continues to trade above the April low at .8671," Jones says, referring to a target level of EUR/GBP that implies a Pound-to-Euro rate of 1.1030. 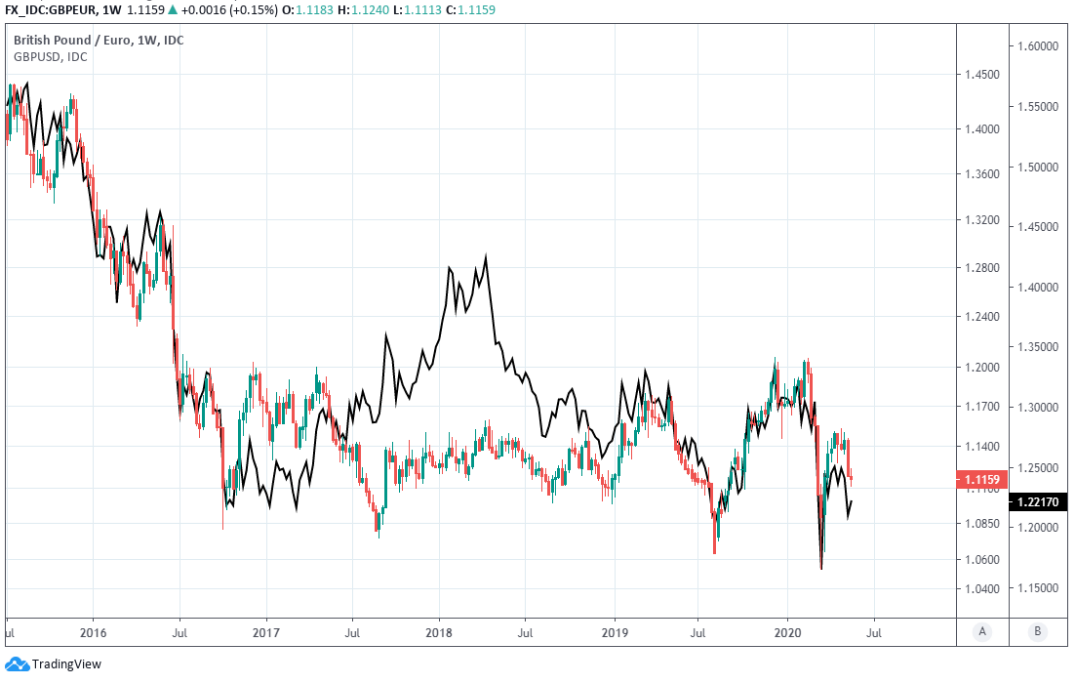 Above: Pound-to-Euro and Pound-to-Dollar (black line) rates at weekly intervals.

Jones' forecasts put the Pound-to-Euro rate on course for a collision with the 50% Fibnoacci retracement of the March-to-May rebound at 1.1030.

However, the 1.05 threshold could beckon if the EUR/USD and GBP/USD exchange rates diverge even further from their usual positive correlation, with the single currency rising to 1.12 while Sterling dips to 1.18 against the greenback.

Both those latter scenarios are also tipped as likely by Jones and a number other analysts for the weeks ahead, although it might a significant Bank of England event amid a trigger happy and risk hungry market for the two exchange rates to sustain such a divergence. Jones and the Commerzbank team also forecast that 1.02 will be seen by the Pound-to-Euro rate on a one-to-three month horizon, which is lowest ebb from the 2008 crisis.

Those rates would only be available at interbank level however, with those quoted to retail and SME participants likely much lower. Specialist payments firms can help squash the spread between interbank and retail rates.