- EUR/USD extends three-day rally amid effort to get past earlier highs.
- But faces roadblocks inbetween 1.10 and 200-day average at 1.1014.
- Some analysts say EUR/USD risks a fresh 1.08-to-1.10 range-trade.
- But others say bearish conviction is ebbing on Franco-German pact.

The Euro failed to break above a key techncial level against the U.S. Dollar over the course of the past 24 hours, confirming a deal between France and Germany to raise up €500BN for fighting the coronacrisis has failed to provide the Euro with the required momentum to break higher.

The Euro-to-Dollar exchange rate rallied to a high of 1.10 in mid-week trade, a gain of almost three quarters of a percent, but it was met with familiar technical resistance which had blocked its path higher earlier in May as well as in April.

The strength of these technical obstacles will require the Euro to generate significant momentum if they are to be overcome, and unless they can be taken out the single currency might find itself stuck in a 1.08-to-1.10 range.

"The EUR is set to follow the USD mood," says Shaun Osborne, chief FX strategist at Scotiabank in a note out on Tuesday. "The EUR may extend to test the 1.10 mark. Yesterday’s rally tapped out near the 100DMA at 1.0972, while at 1.0969 today it will again act as resistance for EUR moves away from 1.0950 that will act as a strong magnet to bring back the currency from either direction. Support is 1.0920 followed by 1.0900."

The Euro was testing above Tuesday's high around 1.0972 late Wednesday, with Dollar moves in the driving seat of price action while Monday's Franco-German agreement to provide grants to weaker, virus-hit EU members aided sentiment toward the single currency.

That agreement has been hailed as a potential game-changer for the future of the common currency bloc but the resulting rally has not yet taken the Euro far enough to eliminate the range-bound bias of the exchange rate. 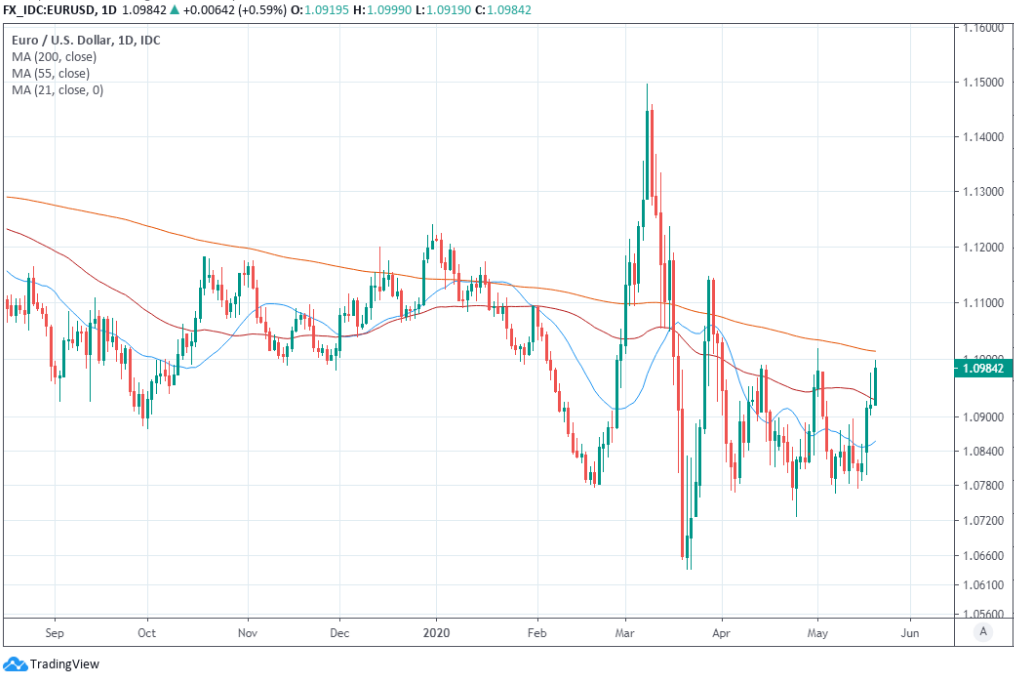 Above: Euro-to-Dollar rate shown at daily intervals with 200-day moving-average in orange.

"EUR/USD is starting to break up from its converging range and its attention is centred on the 200 day moving average and the current May high at 1.1015/19. A close above here (favoured) is needed to regenerate upside interest to the 1.1240 December peak and beyond. Dips should find that the short term uptrend at 1.0790 offers support and while above here will assume a neutral to positive bias," says Karen Jones, head of technical analysis for currencies, commodities and bonds at Commerzbank.

Wednesday's price action came with investors enthused by hopes that a coronavirus vaccine could soon put an end to the long-term threat posed by the pneumonia-inducing disease, which has lifted stocks and commodity prices this week, although Monday's Franco-German proposal to provide the European Commission with additional budgetary resources so it can provide grants to financially vulnerable and overindebted Eurozone member states that will bolster the recovery out of the coronavirus trough.

Monday's Franco-German agreement seeks to shore up the bloc's political future by providing grants rather than loans to weaker, virus-hit members that will help them cover the cost of unprecedented national economic shutdowns used to contain the coronavirus, without adding directly to their debt-to-GDP ratios and risking a destabilising rebellion in the bond markets. It follows weeks of acrimony in Europe as Southern members lashed out over a perceived lack of 'solidarity' at the height of the coronavirus pandemic, which hit the overindebted and financially vulnerable 'periphery' harder than it did the North.

"Despite possible constraints, there is plenty for EUR bulls to get excited about. Breaking taboos around debt mutualisation and grants would represent what some have termed a “Hamilton moment” for the EU, comparing it to US steps to create a common federal budget in 1790. If an explicit, transparent and sustainable fiscal risk transfer mechanism can be created, markets would have less reason to have to price in longer term euro breakup risk," says Shahab Jalinoos, head of FX strategy at Credit Suisse.

The recovery fund could have significant, long-term implications for the bloc but will face hurdles in the weeks ahead, most notably the need to secure a unanimous endorsement in the European Council where some Northern members might oppose the idea of providing members with grants instead of loans. Some in the North have always opposed debt mutualisation that would lay the foundations for an EU finance ministry, even though many have long said it's necessary to ensure the sustainability of the Euro currency and European Union.

Credit Suisse's Jalinoos says Monday's agreement is exactly that; a small step toward an EU finance ministry that will bolster the bloc's badly depleted crisis-fighting toolbox. So far the Commission has been able to issue only small amounts of EU-budget-backed debt in certain limited circumstances. The surprise development has "much diminished" Jalinoos' confidence in some Euro forecasts, which include a Euro-to-Dollar rate of 1.07 by the end of June accompanied by a EUR/CHF rate of 1.0250 and a EUR/JPY rate of 112.

"Based on numerous conversations we've had, our impression is that the issue of the Eurozone is very polarizing: investors want to see either "fiscal union" - through which various member states become German appendages - or dissolution ("break up"), since both avenues provide a clear way forward that is tradable. Instead, what we are consistently left with is something in the middle," says Stephen Gallo, European head of FX strategy at BMO Capital Markets.

He adds, "another dull and lethargic range" beckons for the Euro but that it's not a good idea to bet on continued low volatility in the exchange rate. 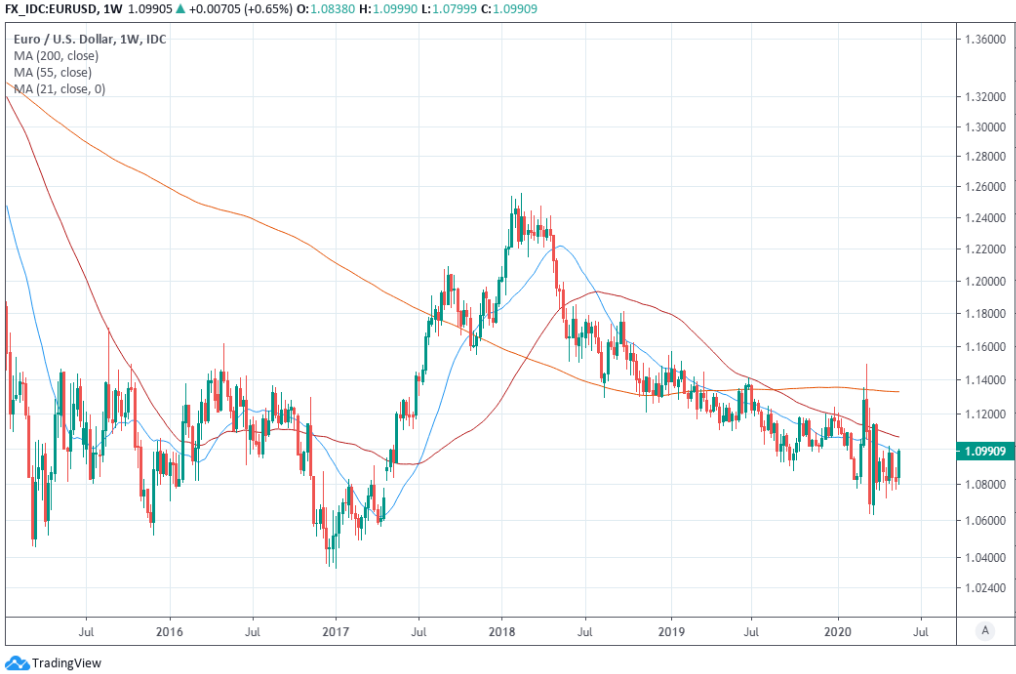 Beyond technical resistance, the most immediate rub for the Euro is not only that Monday's Franco-German agreement will require the unanimous endorsement of EU leaders in order to get the recovery fund off the ground, but that unanimously approving it will also require all national leaders to back the next seven-year EU budget. Leaders already declined to endorse that budget back in February due to disagreements over a number of its provisions.

Controversial provisions included new tax raising powers for the European Commission and larger mandatory budget contributions from the very same Northern countries who're likely to oppose the idea of giving grants rather than loans to the more troubled Southern members. Those countries said no to increased spending when the EU was seeking to fill the estimated €75bn black hole created by Brexit and it's far from clear that coronavirus will have changed the politics of those answers in a Euro-friendly way.

"European Commission-issued debt will leave expenditure holes in the EU's Budget that will eventually need to be filled. These holes are external commitments which reduce the capacity of governments to address national priorities, and ultimately reduce national autonomy. This is why leaders were unable to agree on a 7-year financial framework for the EU's Budget in February," Gallo says. "Being a large net-payer into the EU Budget, Italy will have to draw down on the very funds it contributes; and if it can't contribute, there are countries in the bloc which are half as wealthy (in GDP per capita terms) that will have to stump up a big portion of the difference."

All of this makes the June 18 European Council meeting and any intervening comments or counter-proposals from leaders of other EU members key for the Euro-to-Dollar rate outlook. Horse-trading that stokes doubt about the recovery fund could take the wind out of the Euro's sails and that's assuming that neither U.S.-China trade tensions nor the Brexit process has done that first.

Some forecasters see the Euro-to-Dollar rate falling to 1.02 while others see it ending next month at either 1.10 or higher at 1.12. Much depends in the very short-term on whether the 200-day moving average at 1.1014 can be overcome on a closing basis while beyond this week, it's all in the hands of the EU's national leaders, with everything still to play for.