- Trend to extend for some time until rates' gap gradually closes

The Swiss authorities are likely to take a hand's off approach as the market carries on depreciating their currency.

The Swiss Franc's recent bout of depreciation means the Swiss National Bank (SNB) can take a breather after toiling for years to keep the Franc cheap - the market is doing most of its job for it - and the Bank is likely to happily take a backseat as the trend continues, according to Janwillem Acket, an analyst at Julius Baer.

After the SNB gave up trying to defend the 1.20 EUR/CHF floor in January 2015 the exchange rate plunged to 0.86 in a matter of hours, causing all sorts of chaos in the process, with several brokers going bankrupt and speculators who had bet on the floor holding losing money hand-over-fist.

Since then the exchange rate has crept back up and now finally returned to 1.20 again, peaking at 1.2005 on April 20. 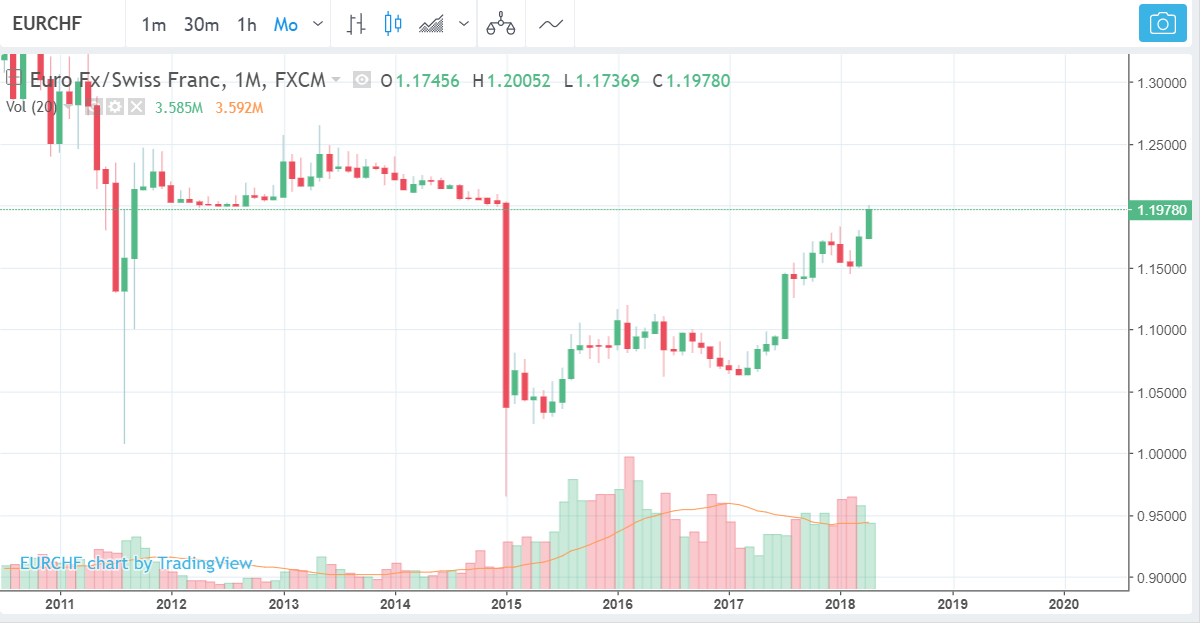 The SNB is likely to receive the news with some relief since it means the exchange rate is now once again back within its preferred zone and rumours it may now start to tighten monetary policy are wildly premature, according to Acket.

Part of the recovery in the Euro versus the Franc has been due to the SNB embracing one of the loosest monetary policy strategies in the western world. Switzerland is one of the few countries where banks will pay you to borrow as interest rates lie in negative territory at -0.75%. Since interest rates tend to drive global capital flows, with capital coalescing where it can earn the highest - not the lowest - returns, Switzerland's minus rate is a massive disincentive. Thus lower inflows have reduced demand for and weakened the Franc.

Yet with the Swiss economy puttering along quite nicely and the Franc back down where it should be, could it now be that these ultra-low rates are out of place and the SNB may be inclined to start raising them? Not, according to Acket.

"So far, the SNB’s negative interest rate regime has proven to be the most effective instrument to weaken the CHF, but because of that, we believe that the SNB will only very cautiously initiate its policy normalisation," says the analyst.

Acket goes on to say that although the low exchange rate could increase risks of the economy "over-heating" headline inflation remains low at 0.8%, and core inflation at 0.6% year-on-year.

Quite why analysts might think the SNB would rush to undo all the good work of bringing the exchange rate back up to the floor of the zone they targeted previously, is rather bewildering, and the Baer analyst is clear that he sees the SNB unlikely to want to rush to change the monetary settings for fear of upsetting all its good work.

"The SNB so far has signaled its satisfaction how the franc exchange rate has developed recently; in addition, it also relays a subtle message that is not at all in a hurry to initiate normalisation soon," says Acket.

As such, the forecast for the Franc is that it will continue depreciating - with EUR/CHF therefore rising.

"Taking account of the fact that the SNB is satisfied with the recent CHF/EUR exchange rate and willing to allow further depreciation of the CHF, we revise our 3-month EUR/CHF outlook to 1.20 from a previous 1.18 and in 12 months to 1.22 from a previous 1.20," concludes the analyst.

The SNB meanwhile is likely to shadow the ECB with rate rises coming as and when the ECB switches off stimulus and then begins raising rates itself.

Julius Baer then expects the SNB to raise interest rates by another 0.25% in June 2019 when the ECB starts hiking its main refinancing rate.

The gap between the two will eventually close, putting pressure on the Euro but only very gradually, says Acket.

The Swiss franc has scaled a new 18-month high against the Euro and remains in a short-term of appreciation against the Pound which could extend over coming days, but ultimately the gains are reaching their limits says a major investment bank.