The Pound-to-Canadian Dollar rate starts the new week on a positive note by going 0.68% higher to reach 1.7175 owing to a broad-based rally in Sterling, linked to growing expectations that the EU and UK are on track and doing enough to ultimately reach a post-Brexit trade deal before the year ends.

Sterling stabilised last week against a range of currencies including the Loonie, which some analysts attributed to the sheer scale of September’s earlier losses.

However, investors’ aversion to the Pound may also have lifted somewhat given the seemingly optimistic sentiments of European negotiators and suggestions from British trade advisors that some form of “implementation period” could follow any hastily agreed last minute trade pact.

“The politics have been better. While we still put no deal BREXIT risks at 40%, our base case remains a “skinny” deal is struck. As negotiations enter their final few weeks, the mood music has been better,” James McCormick, global head of desk strategy at Natwest Markets.

Brexit talks continue over the coming days, beginning on Tuesday and culminating on Thursday with a meeting of the chief negotiators who are expected to brief the press on progress, or lack thereof.

The controversial and so-called level playing field will dominate the agenda in this week’s talks, while the two sides will have just a fortnight to reach a deal from that point before the self-imposed October 15 deadline.

Sterling will be sensitive to any lamentations of “limited progress” or “significant differences,” but with government trade advisors talking about so-called implementation periods and government-friendly political media now openly mulling what life might be like under a compromise arrangement on state aid, Pound Sterling’s Brexit risk could be shifting to the upside.

In other words, and even if last week’s U.S. Dollar rally and sell-off in stock markets continues, investors may become reluctant to bet against Sterling in case of a sudden and surprise breakthrough. This would come after months of increasing pessimism and the clearest indication yet, in the form of the also-controversial Internal Market Bill, that Prime Minister Boris Johnson could be willing to walk away from the table unless acceptable terms can be agreed. 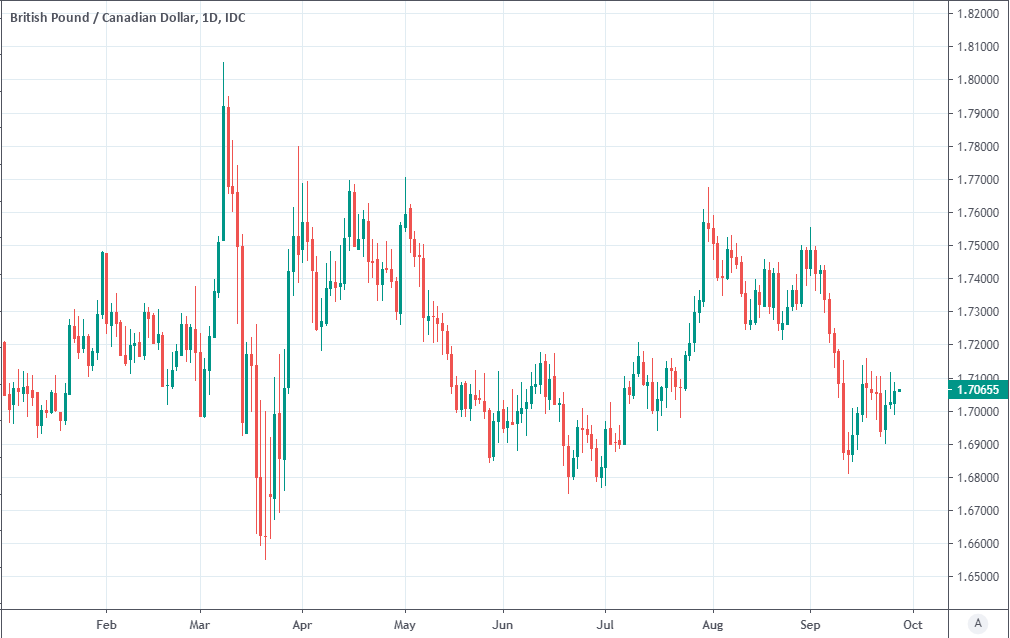 While sentiment improves for Sterling, the same cannot necessarily be said of the Canadian Dollar.

"The Canadian dollar still presents relatively solid fundamentals. But the recent setback in risk sentiment and the rise in Covid cases worldwide do highlight a non-negligible downside risk for activity currencies as we head into the US elections in November. In turn, we now see the USD/CAD outlook as more uncertain compared to a few weeks ago, its downside potential as somewhat more limited, and we are inclined to see the pair staying above the 1.30 mark in 4Q,” says Francesco Pesole, a strategist at ING.

Brexit talks will play out in the background as Canada’s July GDP report comes in and the first of three U.S. election debates, both of which will take place amid unease in stock markets and a tentative recovery of the U.S. Dollar that has got USD/CAD threatening a return toward 1.35. Under these circumstances the Loonie needs GBP/USD to break beneath the technical support levels currently underpinning it in order to avert a further recovery by the Pound-to-Canadian Dollar rate, as those two are key influences on GBP/CAD.

If USD/CAD rose to 1.35 without a countervailing fall in GBP/USD then Sterling would edge higher from 1.7060 to 1.7145 over the coming days, although any unravelling of GBP/USD would risk seeing the Pound fall back to 1.68 against the Canadian Dollar. The outcome of the week’s Brexit talks, expected to be announced on Friday if-not before, could be decisive.

A breakthrough in the negotiations would see the Pound-to-Canadian Dollar rate substantially exceed 1.7145.

“July’s 3% GDP gain is of course a step in the right direction, but won’t be much of a surprise, and we’re expecting a further advance in the flash estimate for August. Indeed, the main risks for the pace of growth lie in the recent upturn in Covid case counts, and we won’t see the impact of that until September, or more likely, October reports,” says Avery Shenfeld, chief economist at CIBC Capital Markets, with one eye on Canada’s Wednesday GDP data.

The highlight of the week ahead for the Canadian Dollar is the 13:30 release of GDP data, where consensus is looking for a 2.9% increase to follow on from the 6.5% gain seen back in June. 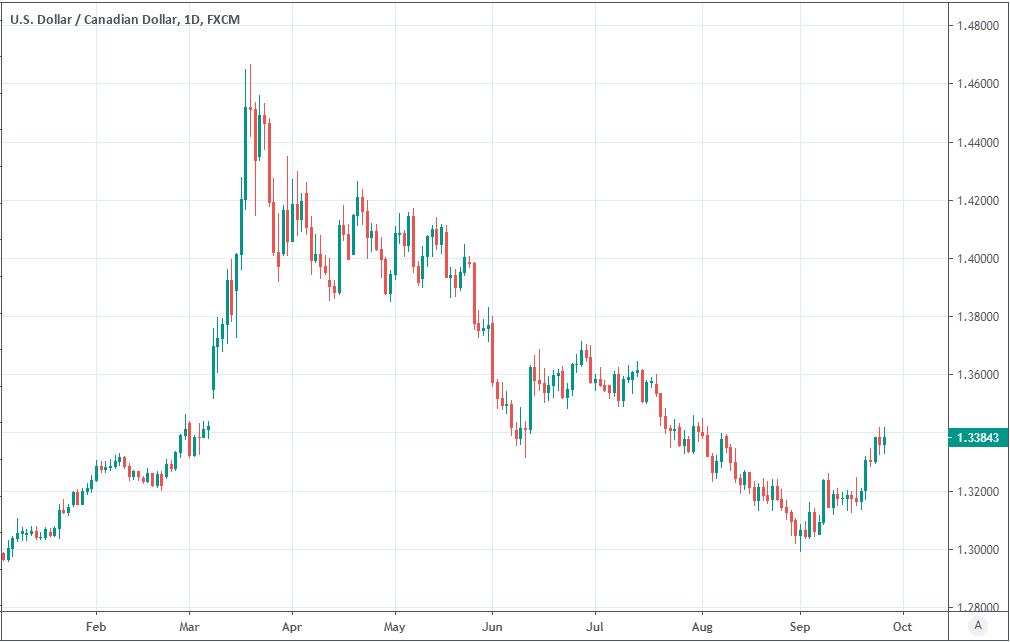 The Loonie could be sensitive to surprises, as a better-than-expected number might bolster its appeal among investors while a negative surprise would be a bad omen for the economic recovery and could put the Bank of Canada (BoC) into an awkward position.

“The loonie now depends heavily on the outlook for global drivers, like growth and risk sentiment. It's basically a broader USD view now. Our expectations of a positioning squeeze alongside event risk and elevated seasonal factors, leaves our USDCAD trading bias leaning higher. We're looking for a retest around 1.35 but would use those rallies to position for a bigger move lower in the quarters ahead,” says Andrew Kelvin, chief Canada strategist at TD Securities.

Beyond Wednesday’s GDP data the market’s focus is likely to turn toward the first of three televised U.S. election debates in which President Donald Trump and opposition candidate Joe Biden of the Democratic Party, with investors looking to see if what remains of Joe Biden’s comfortable polling lead can survive a debate with a typically belligerent Donald Trump.

The consensus view in the market is that a Biden presidency would be bad for the Dollar owing in part to the expectation that a Democratic administration would favour larger government and more onerous regulation that stifles business, as well as spend more. This might mean that any strong performance from Trump lifts USD/CAD and GBP/CAD this week, while any outperformance by Biden hampers the two.

“As expected, the USD has emerged as the primary beneficiary from the recent risk selloff fuelled by global growth concerns as well as growing political risks ahead of the US presidential election. In the run up to the first televised debate between Joe Biden and President Donald Trump next week, the USD could benefit from any shift in polls in favour of the incumbent,” says Valentin Marinov, head of FX strategy at Credit Agricole CIB. 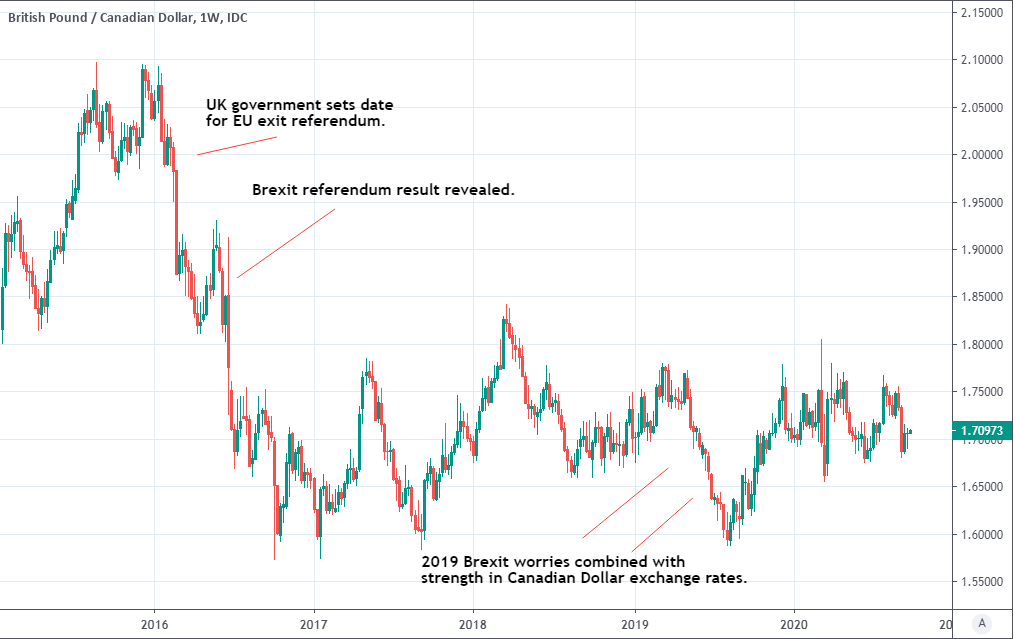