- GBP/USD left bloodied and nursing -3.68% loss this week.
- Amid row over interpretation of EU withdrawal agreement.
- GBP/USD back to levels as low as 1.15 on 'no deal' Brexit.

The Pound-to-Dollar rate was left beaten, bruised and bloodied on Friday following a painful week for a Pound Sterling that's been walloped by renewed fears about the outcome of the Brexit process, although analysts are warning that further, steep losses are still possible.

A slower pace of decline limited losses in all major Sterling exchange rates to less than -0.50% on Friday, although this may have reflected investor caution ahead of a speech in parliament by Prime Minister Boris Johnson.

“Brexit talks are threatening to collapse after the UK Government contemplated passing a law which is incompatible with the Withdrawal Agreement. GBP had been one of the top currencies in August, as shorts in GBP/USD were squeezed out,” says Kit Juckes, chief FX strategist at Societe Generale.

Johnson and his government were given an ultimatum by the EU Thursday, to abandon the controversial Internal Market Bill or amend it in a manner that would defeat the object of the exercise within 20 days, else face trade talks being called off, legal action and even what was termed as a “trade war.”

The Prime Minister said in a subsequent blog post that he will “not back down,” but analysts and investors are on the lookout for clues as to whether this statement was serious, or just intended for consumption by the general public. 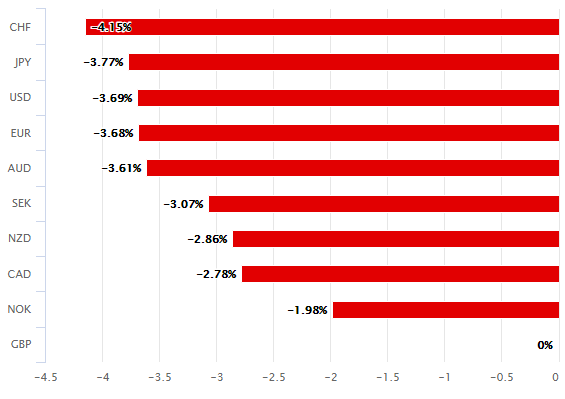 In the government's own words, the bill will "breach international law," but is intended only as “a legal safety net designed to protect our country against extreme or irrational interpretations” of the EU Withdrawal Agreement after Brussel's interpretation of it alarmed London.

It came as trade negotiations stalled due to differences over how exactly how much influence and control the EU should retain over British public life after the transition ends, bringing controversial arrangements for what might happen following a 'no deal' Brexit into sharp focus.

“It can be imagined that there are a number of lines from the Great Escape that may have been recited by UK government minsters when the decision was made to breach the terms of the Brexit Withdrawal Agreement in a ‘specific and limited’ way. In the movie the question of ‘why didn’t anyone think of this before’ is followed by the line ‘it’s so stupid, it is positively brilliant’,” says Jane Foley, a senior FX strategist at Rabobank. “GBP losses could extend further dependent on the outcome of the EU/UK trade talks.”

This has set the stage for a domestic and international political clash that threatens to derail the trade talks with the EU, which need to wrap up in sufficient time for any agreement to be ratified before December 31, and possibly also before a self-imposed mid-October deadline.

It’s well documented how Johnson claimed to have removed from the agreement the so-called Northern Irish backstop, which provides for what can only be described as a partial annexation through a form of power sharing in the province. The problem for Johnson is that it wasn’t true when he said it. 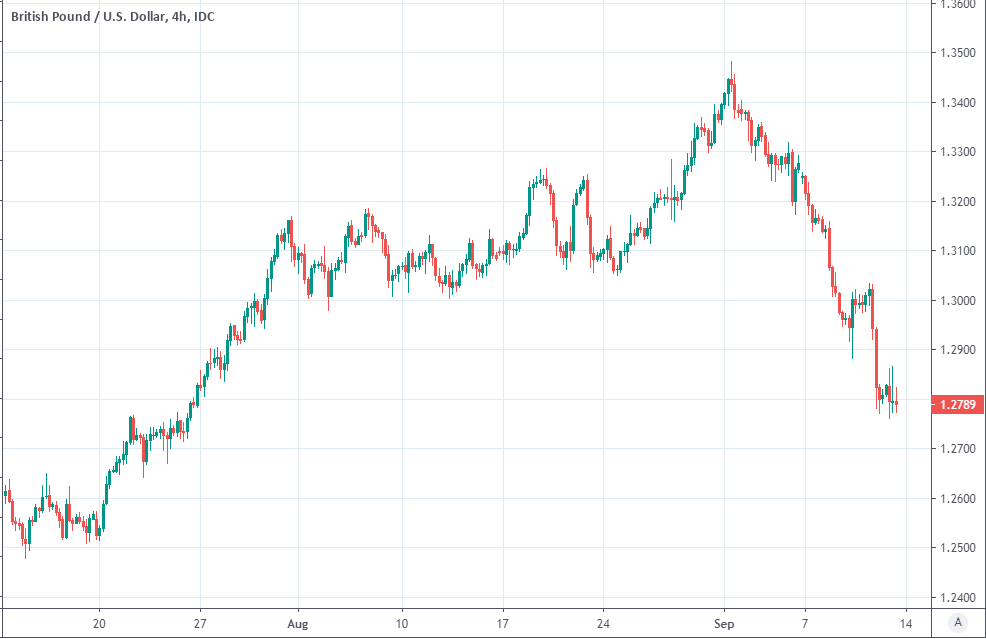 Johnson's Withdrawal Agreement omits only the following text which appeared on pages 301-to-302 of Theresa May's revised November 25, 2018 agreement.

“RECALLING that the Withdrawal Agreement, which is based on Article 50 TEU, does not aim at establishing a permanent future relationship between the Union and the United Kingdom. RECALLING the Union's and the United Kingdom's intention to replace the backstop solution on Northern Ireland by a subsequent agreement that establishes alternative arrangements for ensuring the absence of a hard border on the island of Ireland on a permanent footing; HAVING REGARD to the Union and to the United Kingdom's common objective of a close future relationship, which will establish ambitious customs arrangements that build on the single customs territory provided for in this Protocol, in full respect of their respective legal orders.”

The actual terms that gave effect to this so-called backstop still remained embedded in the agreement.

It stretches the bounds of credulity to the utmost but apparently, so-called lawyers in the Civil Service didn't notice this, The Telegraph has reported. The "civil service’s top lawyer Jonathan Jones," reportedly resigned this week.

“Sterling/dollar’s daily chart technicals have deteriorated so quickly this week that we now firmly believe that the market’s uptrend is over. We said last Friday that the market would get more directional with a break out of the 1.3250-1.3320 range, but we have to admit we’ve been a bit surprised with just how directional it has been and how major chart support levels have been dropping like flies,” says Eric Bregar, head of FX strategy at Exchange Bank of Canada. “The marketplace is now clearly worried that the EU and UK won’t reach a trade agreement by the end of the year...We think sterling/dollar now likely adopts a 1.2700-1.3050 trading range going into October.”

The rub for the political commentariat crying foul, demanding an umpteenth u-turn from Johnson’s administration and shrieking about ‘international law,’ is that something clearly got lost in translation when the second time-revised treaty was thrashed out in October 2019. Intention matters in all agreements. 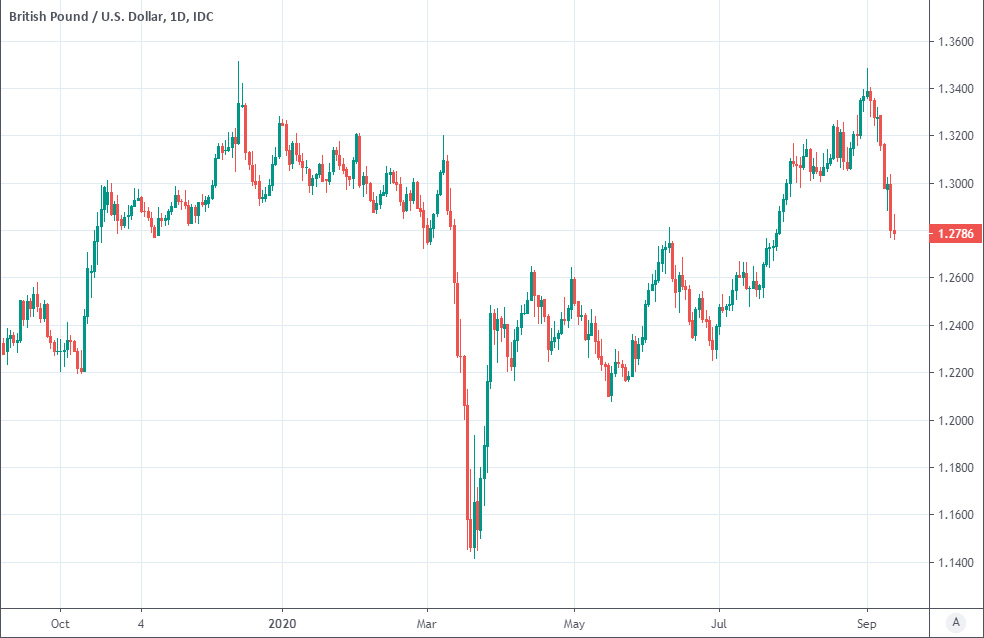 Johnson's political declaration substantially develops the earlier ambitions of “Level playing field for open and fair competition,” potentially as a result of his withdrawal treaty omitting Theresa May's commitment to what would commonly be understood as a customs union, and the omission from the political declaration of May's "aligning" with EU rules in "relevant areas."

But Johnson’s act of walking away from the customs union and quasi single market membership has, through a combination of the withdrawal agreement and political declaration, the perverse effect of substantially enhancing the EU's influence and control over British institutions and public life rather than ending it. The clear “intention” of the Prime Minister was to end that.

This is partly the result of the EU itself having moved on a lot since the transition began in January 2020, by bolstering its environment and climate policies while gaining new sway over members' domestic affairs including on tax matters where it never had 'competence' during UK membership.

“We’re now in a no man’s land of levels with very few GBP barriers to judge where GBP can find support here. It’s likely this move lower in GBP continues until we find a concrete reason to buy GBP back (such as parliament blocking the internal market bill, government U-turns or EU compromise,” says Jordan Rochester at Nomura. “For now the UK and EU are at a stalemate with time working against them, no deal is a real possibility and 1.20 in GBP/USD."

It’s also quite possible the EU never will have gotten any new competence over members’ tax affairs had the United Kingdom not decided to leave it.

"It looked like the markets no longer cared about Brexit! But that didn’t last and the pound has now weakened," says Paul Dales, chief UK economist at Capital Economics. "Markets have woken up with a bang to the possibility that the Brexit transition period ends on 31st December without a deal. That could set back the UK’s economic recovery from the coronavirus recession and prompt the pound to weaken from $1.30 now to around $1.15."

Whether by accident or design, the new EU treaty and its accompanying declaration furnish the EU with substantially enhanced control over public institutions and life in the UK when as far as the Prime Minister has said, he and they were intended to end that influence and control.

This creates doubt about whether the treaty can even achieve its stated purpose, is the root of the problem and the driver of Pound Sterling’s losses this week. Then there are questions about whether and how the withdrawal agreement and its accompanying declaration as interpreted by the EU (not to mention the style of relationship sought by the EU), was ever even permissible under the UK constitution in the first place.

“Whether this is diplomacy or rogue state tactics remains to be seen but the damage has been done: idiosyncratic GBP policy risk has returned and uncertainty is rising. We reiterate our bearish view on GBP heading into a crucial phase in Brexit negotiations and are positioning via short GBP/CHF. The risks of no deal have reason,” says Kamal Sharma, a strategist at BofA Global Research, who tips a year-end GBP/USD of 1.24. “Recent price action supports our narrative that GBP is effectively trading like an EM currency.”