Sterling was higher against all major counterparts including a U.S. Dollar that had otherwise managed to clear the board of all opposition, with the morning session’s Pound-to-Dollar rate gains having received a new lease of life ahead of the North American open following Prime Minister’s Questions in parliament.

Boris Johnson said Wednesday the government is looking at a large investment package intended to protect jobs and aid the economy ahead of an anticipated statement to parliament from Chancellor Rishi Sunak at 12:30 on Thursday.

This was before Minister for the Cabinet Office Michael Gove said Brexit trade talks are “progressing” well, following a briefing that told of trouble on the roads of Kent in event of a ‘no deal’ Brexit from the transition period.

“Barnier arrives in London for informal talks today,” says Jeremy Stretch, head of FX strategy at CIBC Capital Markets. “UK Flash PMI witnessed a mixed picture, although both services and manufacturing were lower than in August. Remember the BoE conditioning functions for upgraded forecasts in November are based upon both covid and Brexit, with the former taking precedence. For GBP/USD look for a breach of 1.2691 to open the way for a return to 1.25." 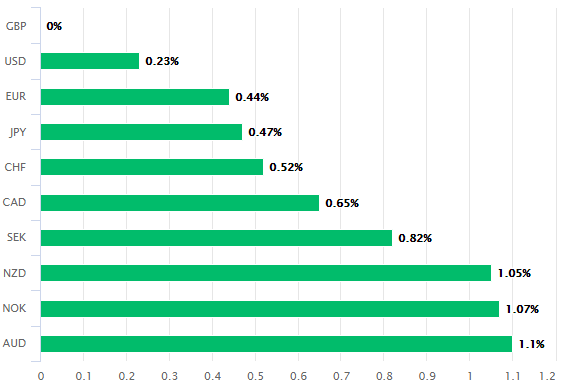 Michel Barnier had reiterated in the morning session that he remains “determined” to secure an agreement with the UK while Shanker Singham, a trade adviser who’s popular with Gove and within the free trading contingent of the governing Conservative Party, told the Brexit committee that a trade agreement could be reached at the last minute in December with ratification deferred until 2021 and carried out within another “implementation period.”

The UK is already in an implementation period but it's more commonly referred to as a "transition period," which ensures continued “rights and obligations” of membership  during the trade negotiations. TheTelegraph has more details including a response from Gove to a question on the matter.

Singham’s comments came after the Internal Market Bill cleared its first legislative hurdle with the government having accepted an amendment that gives parliament a vote on whether to use the controversial powers that would be granted by a resulting Act. The bill grants the government an ability to implement parts of the EU Withdrawal Agreement according to its own interpretation rather than the EU’s or any joint interpretation but has caused anger in Europe and could threaten the trade talks.

“The EU and the UK are negotiating over Brexit trade terms, but the latter seems to, again, be shirtless and shouting “Come and have a go if you think you’re hard enough!” while swaying from side to side,” says Michael Every at Rabobank. “The fact pubs are closing an hour earlier for six months was literally all the UK news was talking about last night: Donald Trump and Xi Jinping’s clashing speeches at the UN hardly got a look in. One would think politicians, who are not afraid of the odd drink -- they have a subsidised bar, after all-- would know this.” 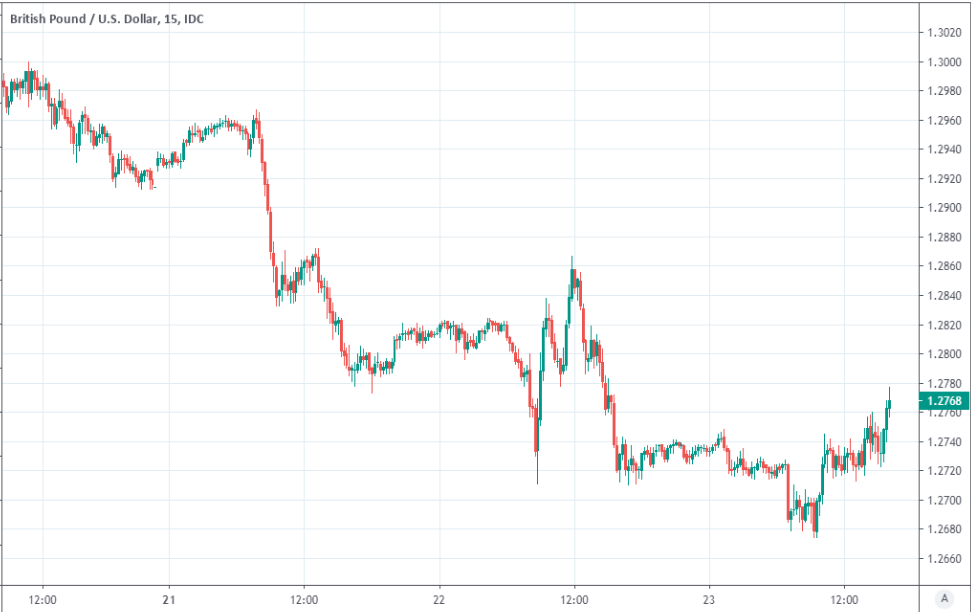 It’s not clear whether it was Johnson, Gove, Singham or all three who was responsible for Sterlings’ change of fortune on Wednesday, although an improved fortune it was given the Pound had languished for days at the bottom of the major currency rankings after the government threatened and then announced new coronavirus-related restrictions. All other risk currencies and even the safe-havens ceded ground to the greenback.

New restrictions have seen pubs ordered to close early and officer workers to abandon the daily commute wherever possible, just weeks after the government pleaded for a return of commuters and barely two months on from the reopening of supposedly non-essential businesses in the hospitality sector.

Earlier underperformances and Wednesday’s outperformance came amid aDollar rebound that could have multiple sources of origin. The Dollar leapt last Friday when the White House moved to push two Chinese social media firms out of the U.S., wobbling stock markets and positively-correlated currencies while rejuvenating the safe-haven greenback.

“A sizeable chance remains that UK / EU post-Brexit trade talks finish with a “no deal” outcome, and that this is widely accepted within the next month. If so, we suspect markets will downgrade not just UK but also euro area growth expectations,” says Shahab Jalinoos, head of FX strategy at Credit Suisse. 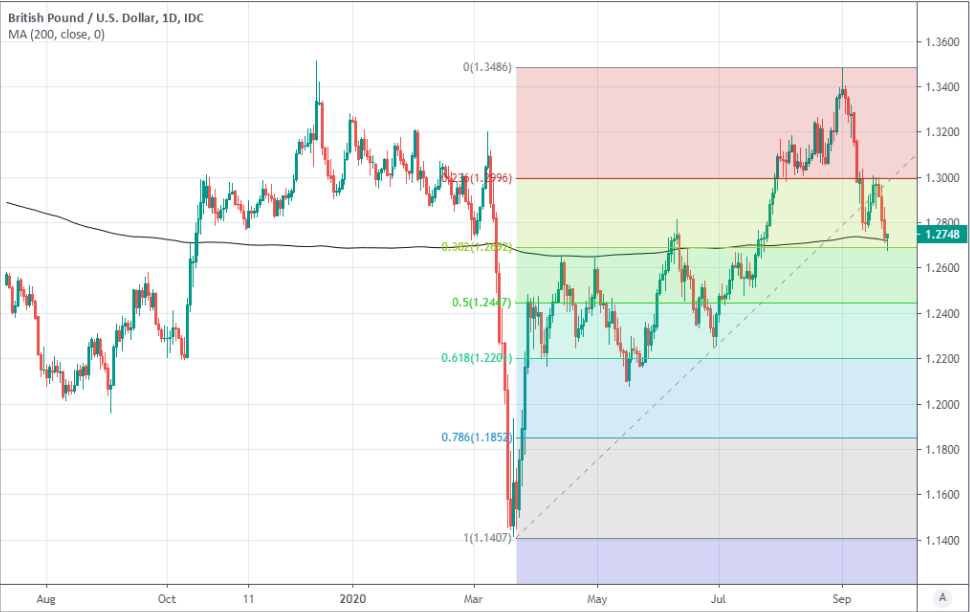 Above: Pound-to-Dollar rate at daily intervals with 200-day average (black) and Fibonacci retracements of March recovery.

Stock markets stabilised this week but U.S.-China tensions and the Dollar have continued to rise along with concerns about the outlook for Europe, where second coronavirus waves threaten fresh ‘lockdown’ and the economic recovery ahead of a self-imposed mid-October deadline for a Brexit trade deal.

This may have prompted an investor rethink on European currencies that were outperforming rivals from further afield as recently as August and despite Wednesday's outperformance, the Pound-to-Dollar rate has sustained technical damage on the charts and is now the subject of downgraded forecasts.

Credit Suisse reduced its one-month Pound-to-Dollar rate forecast to 1.26 this week as a result of Brexit, virus concerns and the resulting impact on its forecast for the EUR/USD rate that Sterling spends a lot of its time following. Meanwhile, others are watching the 1.27 level closely given that a sustained break below there could open the door to even further declines.

“Caution is in order as a downward bubble has developed in the daily chart and since the daily MACD is downbeat and weekly indicators have fallen back,” says Micaela Feldstein at Natixis. “Keep an eye in particular on the supports around 1.2688-1.27 (38.2% Fibonacci retracement of March 2020 to September 2020 upward wave), as a break below these levels would intensify downward pressure, opening the way down towards the support at 1.2447 (ascending support trendline) and even those around 1.2188-1.22 (Fibonacci projections).” 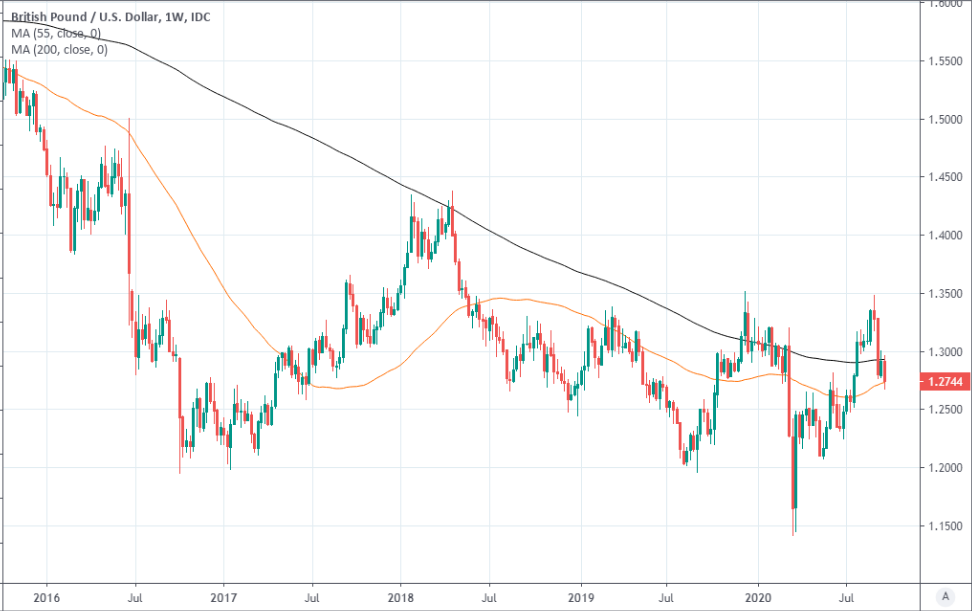