Sterling was higher against all majors, though GBP/CAD gains were the more modest of all owing to an almost equally strong showing from the Canadian Dollar. The Loonie pared earlier losses as stocks turned higher, having overlooked new spending commitments from Canada’s government.

Canadian lawmakers were haggling over whether to spend eye watering sums on further support for companies, households and non-virus related priorities, or to spend even more eye watering sums after Governor General Julie Payette set out the government’s agenda for a new session of the current parliament in Wednesday’s Speech from the Throne.

Payette’s address was delivered as a second wave of coronavirus infections builds in the North American continent’s second largest economy, where already large spending commitments have been made larger still by the minority government’s dependency on other parties that are each attempting to extract concessions, or extra monies, for priorities as perceived by themselves.

“In a normal world situation, this type of fiscal expansion for political survival would be negative for any country's currency. However, in the current situation in which every country's government is borrowing heavily from future generations in order to survive COVID, this type of fiscal expansion doesn't trigger currency depreciation,” says Greg Anderson, CFA and global head of FX strategy at BMO Capital Markets. "We think a move back up to 1.3500 in USDCAD is possible this week if global equities continue to slide, but if it happens, the trigger will be global risk-on/risk-off and not the throne speech." 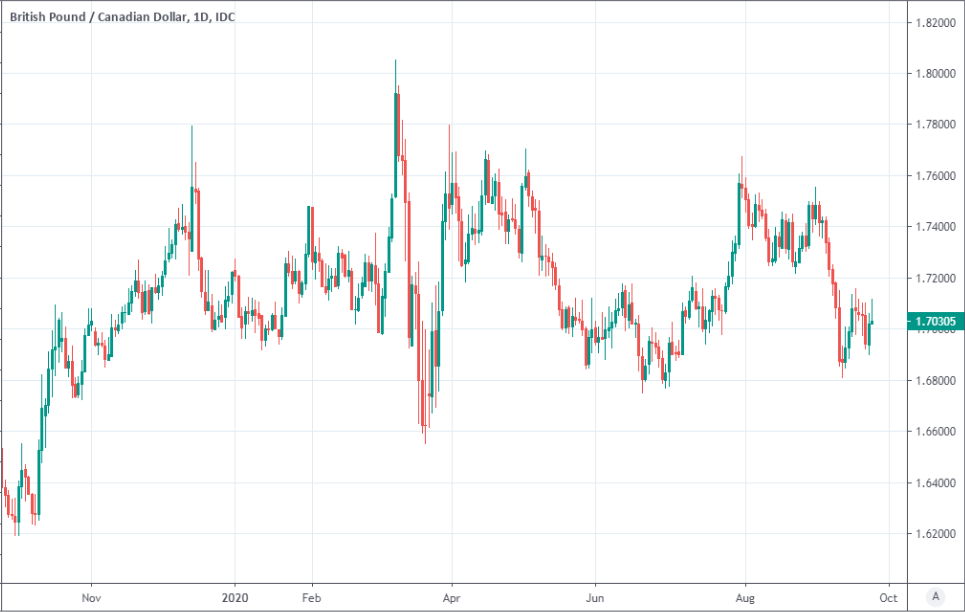 Under the current political and economic circumstances the Canadian government has promised to financially support companies and households through the pandemic for “as long as it lasts, whatever it takes,” although local firms say the fiscal expansion matters little for the Canadian Dollar.

What matters is the trajectory of stock markets, given that the Loonie follows them, and the U.S. Dollar Index which has a negative correlation with risk assets like stocks. Stock markets sold off this last week, alongside the Canadian Dollar and Pound, while the greenback has risen.

“Now that the USD is rallying sharply on risk-off sentiment in equities, positioning should make any CAD decline less severe than declines in EUR and GBP. We haven't really seen that yet, with CAD, EUR and GBP all down 1.7% against the USD over the past week. However, if the USD rally continues, we think that difference in positioning would begin to manifest itself, with CAD outperforming on crosses," Anderson says.

Anderson says USD/CAD may hit 1.35 if stocks keep falling and the U.S. Dollar rising, which might lead GBP/CAD to reverse Wednesday and Thursday's gains. But this has so-far been seen as a less likely scenario, with BMO forecasts envisaging USD/CAD at 1.33 by quarter-end and a continued recovery of GBP/CAD back to 1.73. GBP/CAD is expected to remain near there heading into year-end, before falling to 1.69 in early 2021.

“A break of the 1.3350 level puts the 1.3500 resistance level into range as USD shorts are pared. USD/CAD will continue to trade the position theme, with the bulk of the movement driven by the USD leg,” says Bipan Rai, North American head of FX strategy at CIBC Capital Markets. 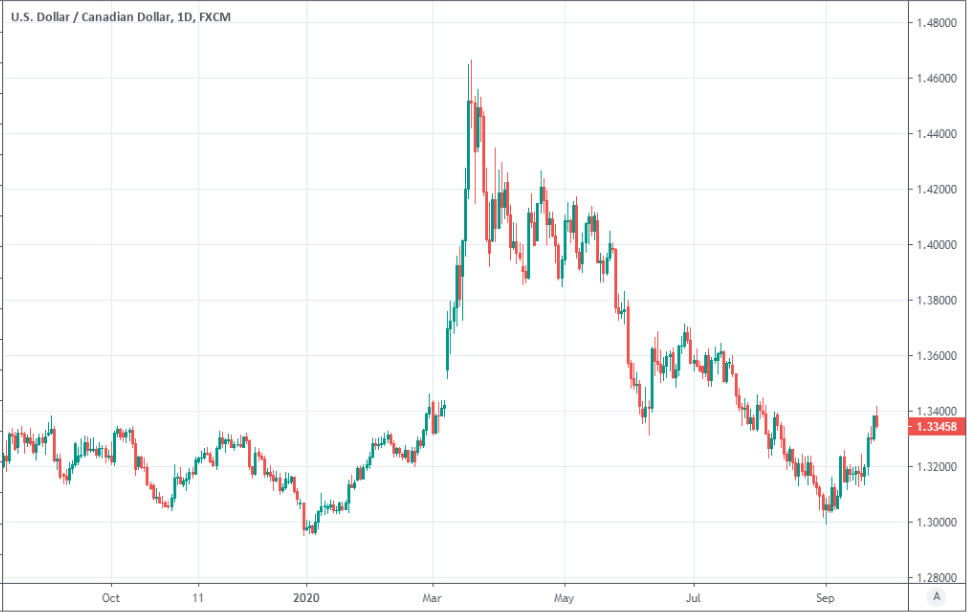 Others also see scope for further USD/CAD gains now it's above 1.3350 however, Sterling's outperformance since Wednesday has so-far prevented the Pound-to-Canadian Dollar rate from falling. The Pound has outperformed since mid-week when a government minister said Brexit talks are “progressing well” and an influential adviser floated the possibility of an “implementation period” to follow any last minute trade deal with the EU.

This signals that either the government is after all open to the idea of an extension of the existing implementation period, more commonly known as a transition period, which the Prime Minister has always ruled out since securing the top office. Or, at the least, that some other arrangement might enable goods to continue travelling back and forth without being subjected to tariffs if a deal is not reached before the current transition ends on December 31.

“Sterling/dollar has defended the lower bound of our expected 1.2700-1.3050 price range into October, and we think this is largely because of Rishi Sunak’s new Jobs Support Scheme and some short covering ahead of possible headline risk on the Brexit and BOE fronts,” says Eric Bregar, head of FX strategy at Exchange Bank of Canada.

Negotiations are ongoing, this week in London, while combative statements about the Internal Market Bill that had set the tone of previous talks and an earlier-downward trajectory of Sterling have been replaced by radio silence from negotiators, the Prime Minister and European officials in that regard.

Meanwhile, the main Sterling exchange rate GBP/USD has turned back from the edge of a precipice just below 1.27 in moves that have been instrumental in halting the Pound-to-Canadian Dollar rate sell-off seen on Monday and Tuesday. 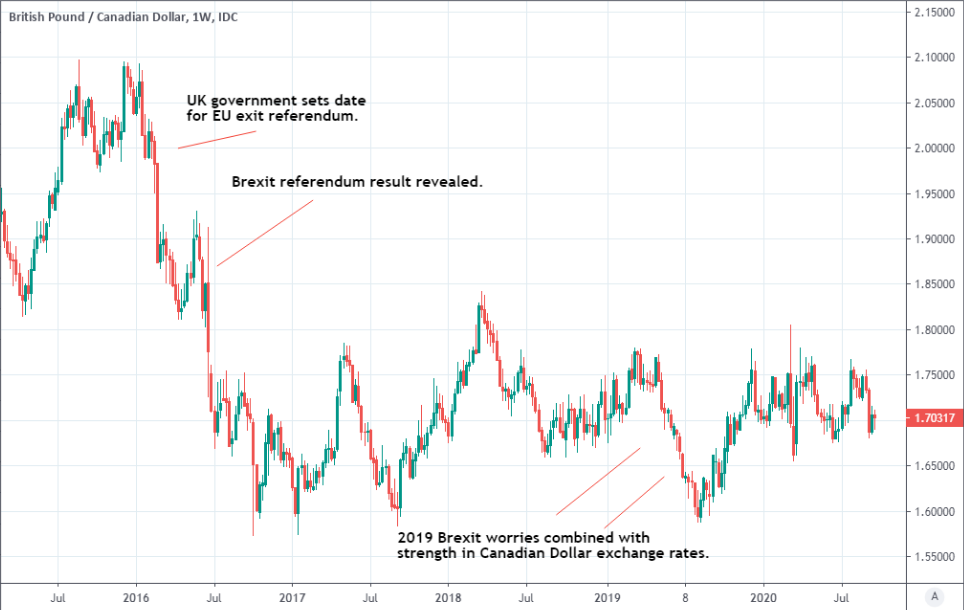