-GBP/USD clings on above cluster of important technical supports.
-As stocks stabilise, but appetite for GBP & risk assets to be tested.
-U.S. election debate may fuel USD rebound, weigh on GBP/USD.
-Ahead of Friday’s Brexit update. Trade talks key for GBP outlook.

Pound Sterling stabilised last week against a range of currencies but not the Dollar, which strengthened against all major counterparts amid weakness in stock markets, an ongoing lack of renewed fiscal support from Washington, ambiguity from Federal Reserve (Fed) rate setters and concerns about coronavirus infections in Europe.

Fed Chair Jerome Powell said last week that rate setters have done “all of things we can think of” and that the recovery could suffer without action from lawmakers. This was after the Federal Reserve Bank of Chicago's Charles Evans said rates could rise before the average 2% inflation target is reached in what appeared to be a contradiction of the bank's new strategy.

Powell had said the new average inflation target would see rates remain at current levels for a period of time even after inflation rises above the 2% target.

The Pound-to-Dollar rate fell by -1.3% for the week, the third smallest loss of any major currency relative to the greenback.

“GBPUSD continues to stabilise at our target of a cluster of supports at 1.2722/1.2655," says David Sneddon, head of technical analysis at Credit Suisse. “Above 1.2777/81 is needed to ease the immediate pressure of this.” 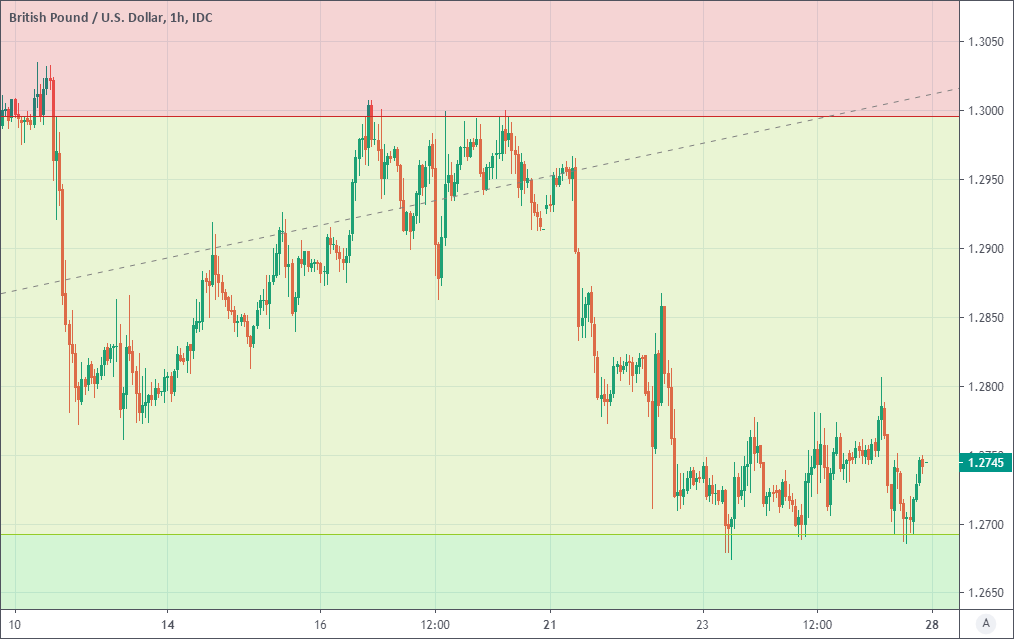 Some analysts say this comparative outperformance of other majors simply reflects the extent to which Sterling had fallen previously, although it did come alongside optimistic sentiments of European Brexit negotiators and suggestions from British trade advisors that some form of “implementation period” could follow any hastily agreed last minute trade pact.

Brexit talks continue over the coming days, beginning on Tuesday and culminating on Friday with a meeting of the chief negotiators. The two sides will have just a fortnight to reach a deal from that point before the self-imposed October 15 deadline so Sterling will be sensitive to any lamentations of “limited progress” or “significant differences.”

Something that has been nagging at me, the EU’s limits on state aid are preferable to quixotic ideas of taxpayers subsidising British tech titans into existence. If, to get a deal done, the government agreed to emulate those state aid limitations in law, it might be no bad thing.

But with government trade advisors talking about so-called implementation periods and government-friendly political media now openly mulling what life might be like under a compromise arrangement on state aid, Pound Sterling’s Brexit risk could now be shifting to the upside.

“GBP/USD is consolidating around the 200 day ma at 1.2718, which has so far held on a closing basis. The market remains under pressure while capped by the 20 day ma at 1.2989," says Karen Jones, head of technical analysis for currencies, commodities and bonds at Commerzbank. "We would allow for further losses to 1.2445 and then 1.2250/00." 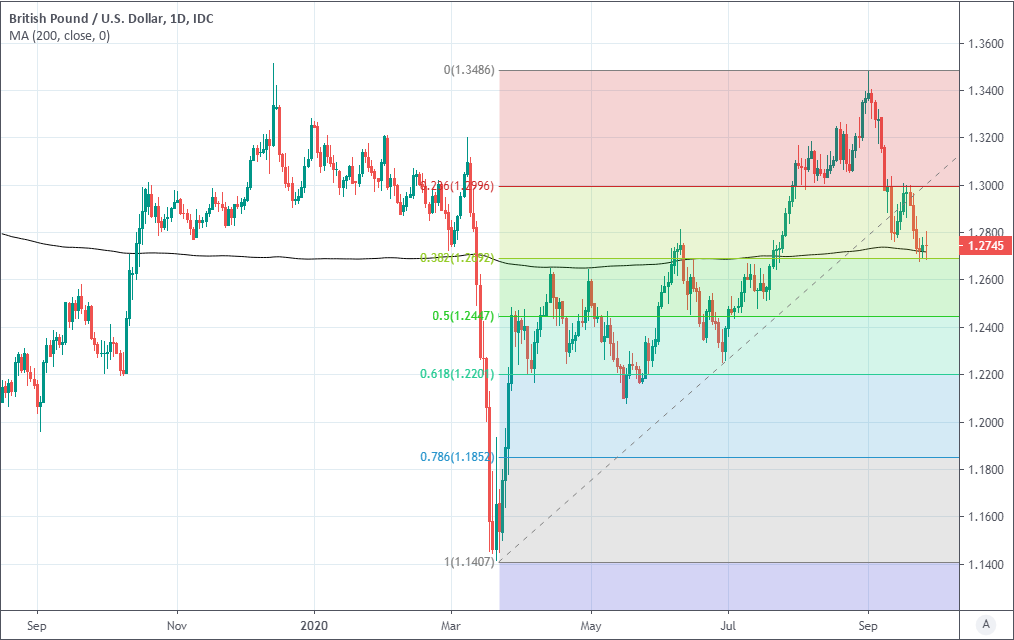 Above: Pound-to-Dollar rate at daily intervals with 200-day average (black) and Fibonacci retracements of March recovery.

Jones is a seller of the Pound-to-Dollar rate from 1.2970 but has told clients to walk away from the trade if Sterling gets back above 1.30. Both she and Credit Suisse’s Sneddon have flagged the area between 1.2989 and 1.3007 as formidable forms of technical resistance that, if overcome, would amount to a green light for a return by Sterling back toward its September 01 high.

Brexit uncertainty will shroud Sterling as the first U.S. presidential election debate gets underway in the early hours of Wednesday morning, pitting President Donald Trump against Joe Biden of the Democratic Party.

“We continue to expect the Dollar to weaken into year-end and beyond, due to its high valuation, deeply negative real interest rates, and the recovering global economy. Our conviction in this view would rise if polling indicates a higher probability of a Democratic sweep in the November elections—and markets are likely to focus on Tuesday’s first Trump-Biden debate for indication on which way the race may be trending,” says Zach Pandl, global co-head of foreign exchange strategy at Goldman Sachs, who has a year-end GBP/USD forecast of 1.28.

Biden enters the debate with a healthy lead over the incumbent among pollsters, but his policy platform entails higher government spending and more onerous regulation that makes for a Dollar negative outcome in the event of an opposition election victory on November 03. 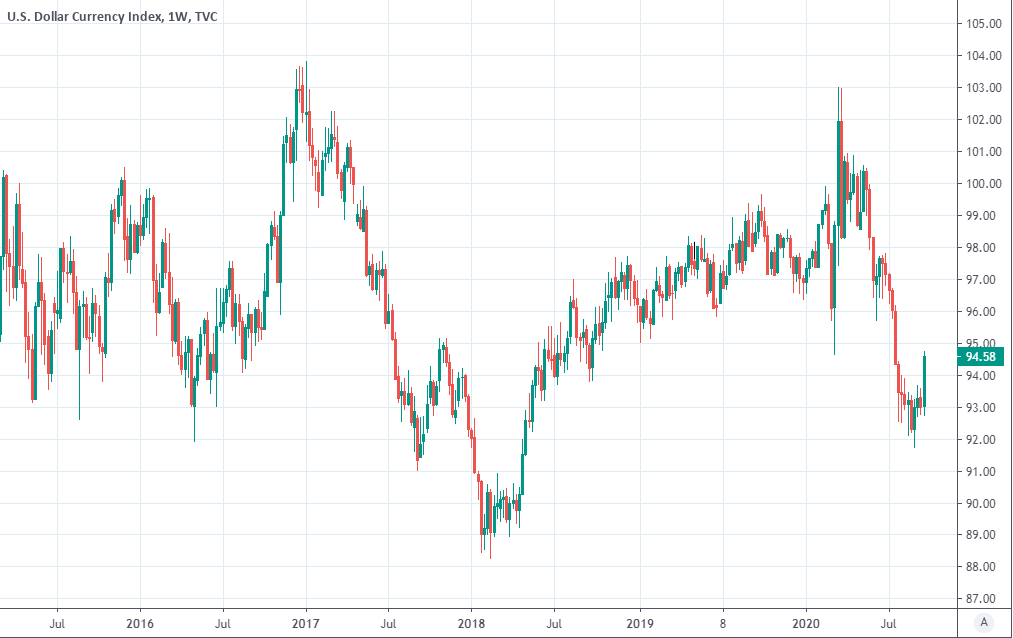 As a result, a poor showing from the challenger could be enough to keep the nascent Dollar rebound going and the Pound-to-Dollar rate under pressure, although not everybody sees it this way. Not least of all because the Dollar has a negative correlation with stock markets, which could rise in the event of a poor showing from the opposition.

“Investors will recall Trump’s strong performances in TV debates four years ago and Biden is prone to gaffs, so there’s a reasonable scenario of a poor performance by Biden next week raising the probability of Trump closing the gap in the polls which in turn raises the prospect of the worst case scenario of a very close election result with contested votes in battleground states and an unresolved outcome for weeks,” says Derek Halpenny, head of research, global markets EMEA and international securities at MUFG. “A poor performance by Biden next week could undermine the dollar versus core G10 currencies, especially versus JPY.”

Brexit and election sentiments will be key influences on the Pound but so too are government responses rising reported coronavirus infections, which have seen restrictions tightened in the UK, Spain and other European countries.

"The recent deterioration of the EUR and GBP outlook has coincided with the start of the second Covid-19 wave across Europe in September. Fears that the growing number of infections could force the likes of the ECB and the BoE to introduce fresh easing measures later this year could keep the EUR and the GBP on the defensive for now. We further note that the EUR has exhibited the strongest and statistically most significant correlation with the severity of the lockdown measures in the past," says Manuel Oliveri, a strategist at Credit Agricole CIB. "In turn, we would expect that any new measures to contain the virus in the Eurozone to have a detrimental impact on the single currency." 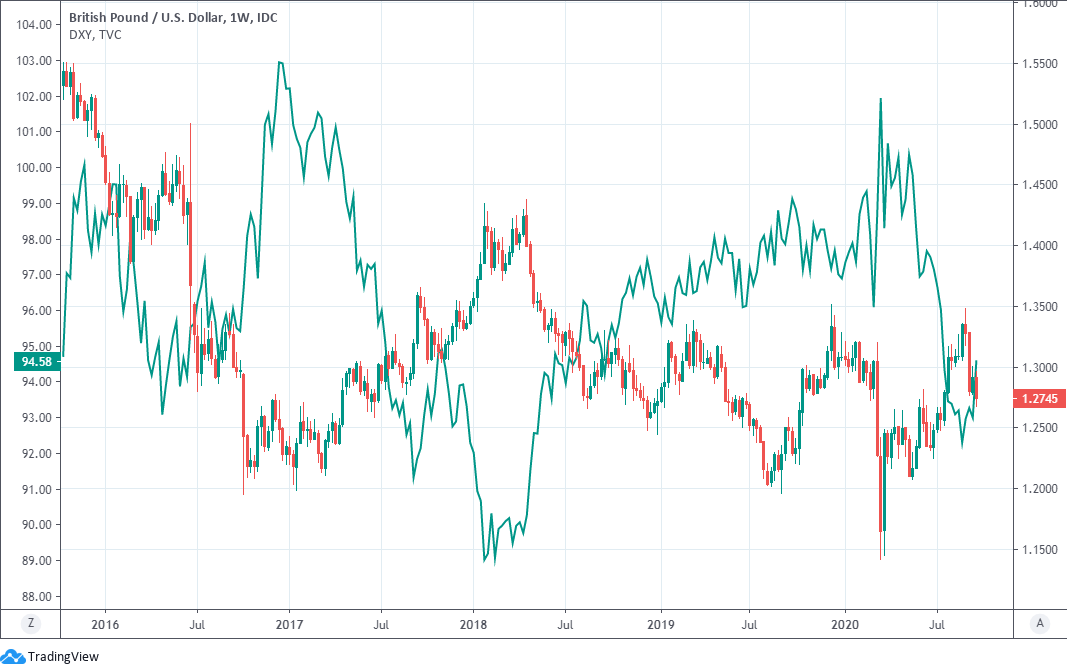 The UK government stole the headlines last week with its closure of hospitality venues after 10pm but with second waves building elsewhere in Europe it might not be the last to curtail activity. Any European rollout of further restrictions or return to outright ‘lockdown’ would be a free lunch for the safe-haven Dollar that likely weighs on Sterling.

"Relative to other European economies, the UK's part-time work scheme falls short in terms of the level of compensation, flexibility and eligibility criteria. Bottom line, this week's new labour market support won't do very much to stem the rise in unemployment," says Sanjay Raja, an economist at Deutsche Bank. "It will take some time for UK GDP to get back up to its pre-pandemic level. How long? Based on our updated projections, we think a few years. In fact, we only expect UK GDP to return back to its Q4-2019 levels sometime in late 2023 - significantly longer than the Bank of England's current assumption (late 2021)."

With election debates, Brexit and virus concerns aside, Friday’s non-farm payrolls report for September could also have influence on demand for the greenback and trajectory of the Pound-to-Dollar rate ahead of the weekend. Payrolls will provide insight into how well the U.S. labour market recovery held up through September, the second month in which households were without enhanced welfare benefits, which has been expected to have a knock-on effect upon consumer facing businesses and could at some point be felt by the job market. Consensus is looking for 900k new jobs to follow August’s 1.371 million and for the unemployment rate to decline from 8.4% to 8.2%.

"It’s clear we are now past the peak of macro data improvement. Momentum has slowed across a number of activity measures and global data surprise indices have started to roll over. A fresh set of restrictions in Europe is not helping, nor is the lack of clarity in recent Fed communications," says Daniel Been, head of FX research at ANZ. "The USD has broken out of its two-month trading range as renewed uncertainty triggers a more defensive approach in currency markets. Near-term momentum is pointing higher as hopes of any pre-election fiscal stimulus slip away and equity markets continue to come off. Next week, the spotlight will return to US politics."