“Even though we think the dollar can stay quite well bid for the rest of the year as the Fed takes the funds rate to 3.25/3.50%, dollar stability at the highs could see renewed interest in this high yield EM local currency bond space,” - ING Group

The South African Rand climbed against most of the currencies in the G20 bucket during the opening half of the week and could lead GBP/ZAR to one month lows with a break back beneath the 20.0 handle in the days ahead if the stalling Dollar brings high yielding currencies back into fashion among investors.

The Rand appeared to benefit on Wednesday when the Dollar eased lower against most major counterparts amid a mixed performance from risky assets like stocks and commodities, leading the South African currency to rise against around three quarters of the G20 basket.

“The rand is currently trading around the short-term technical support at 16,6000. A sustained and consolidated break below this level would provide the signal for a potential extension towards 16,3000,” says Walter de Wett, a fixed income and currency strategist at Nedbank.

“However, the previous extensions on the downside were met with USD buying interest, and this is likely to be the case again initially. Possible trading range for the rand today: 16,3500 to 16,8500,” de Wett said on Wednesday. 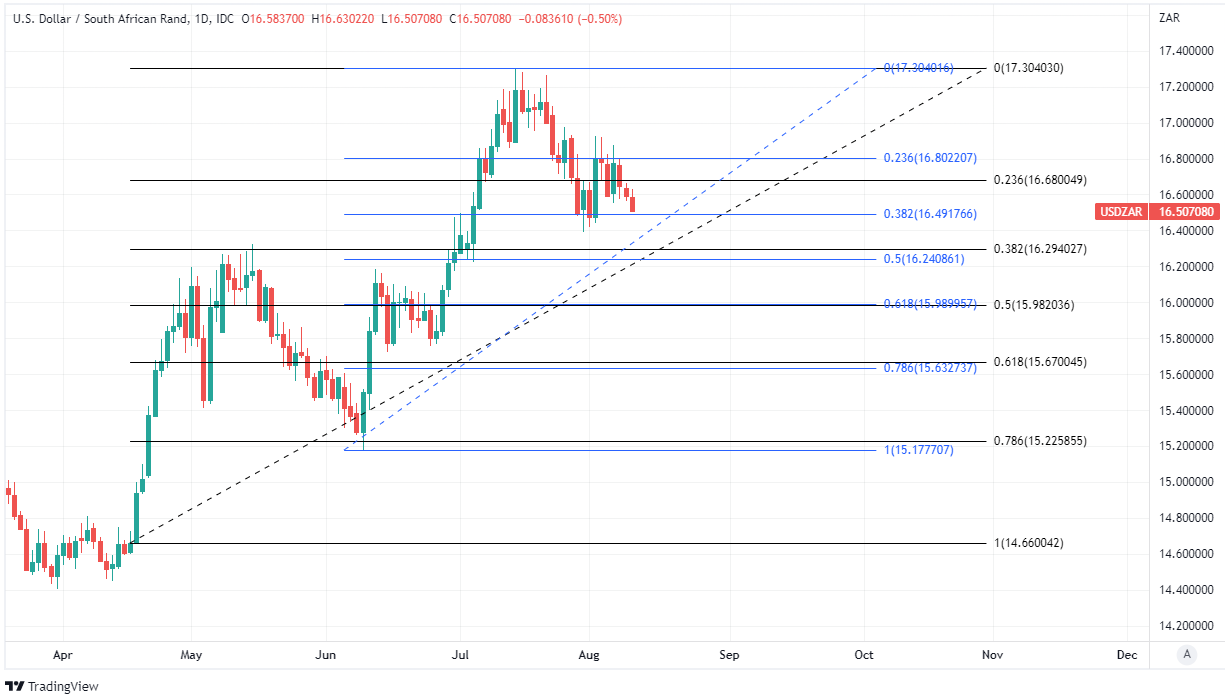 Above: USD/ZAR shown at daily intervals with Fibonacci retracements of June and late April indicating possible areas of technical support for Dollar and resistance for the Rand. Click image for closer inspection.

Rand gains came in advance of U.S. inflation figures for July, which are likely to be a key influence on market perceptions about the outlook for Federal Reserve interest rate policy over the remainder of the year with possible implications for the Dollar direction in the days and weeks ahead.

Wednesday’s performances from the Rand and Dollar have pulled USD/ZAR back near to the lows reached last Monday when a fortnight long correction in U.S. exchange rates was interrupted by a volley of economic data that poured cold water over the idea of an imminent recession in the U.S.

GBP/ZAR has also fallen throughout this period and more so than USD/ZAR, although both are likely to be sensitive to the outcome and implications of the U.S. inflation figures, which could lead the Fed to move at a faster pace toward the interest rate projections it set out in June. 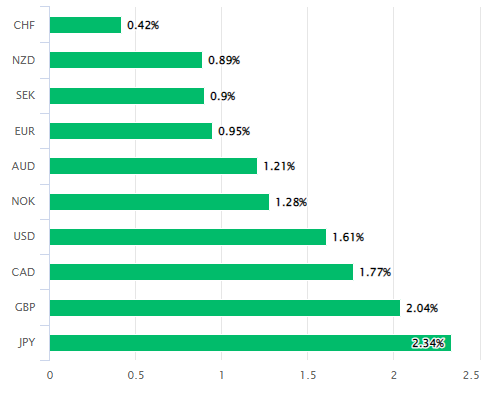 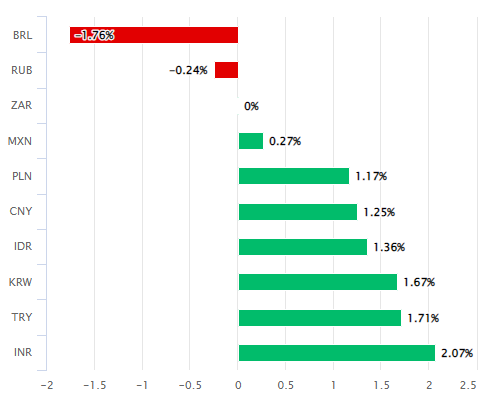 “Markets fear the persistence of a harsh interest rate hike cycle this year and into next. This has caused a notable withdrawal from risk assets over both Q2.22 and Q3.22, resulting in USD strength on safe haven inflows, and weakness in commodity prices and EM assets; and so the rand,” says Annabel Bishop, chief economist at Investec.

“High inflation is still worrying markets, and the prospects for it to remain higher for longer than was initially expected, which is being signalled by key private sector, regulatory and multilaterals research houses and departments. There is consequently risk for further high volatility (EM currency volatility is elevated compared to Q1.22) and the risk for even further rand weakness,” she added.

Rand gains have been sold and Dollar dips bought in the region of 16.40 in USD/ZAR during recent weeks and there is a risk that this would be the case again if U.S. inflation data pushes the Fed toward a faster pace of monetary tightening and bolsters U.S. bond yields. 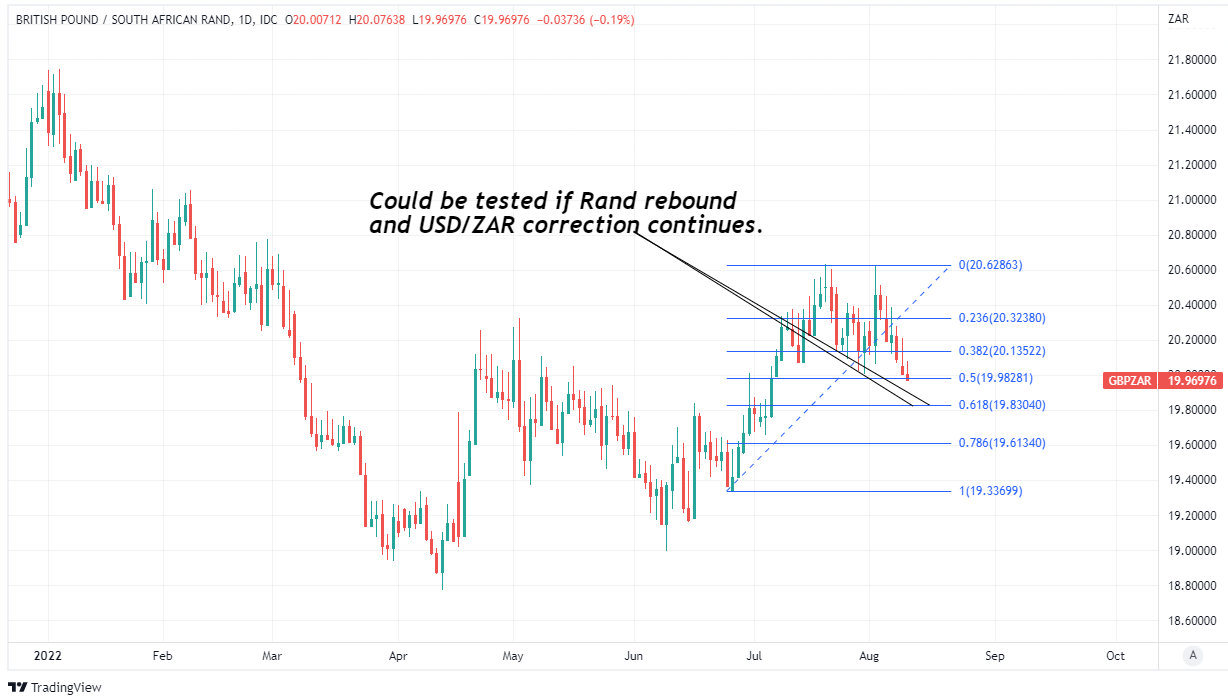 Above: GBP/ZAR shown at daily intervals with Fibonacci retracements of June and late April indicating possible areas of technical support for Sterling and resistance for the Rand. Click image for closer inspection.

“Aggregate EM local currency bond benchmarks are down around 8% year-to-date (better than equity benchmarks). Yet that 8% drop masks regional differences. EM Latam (dominated by Brazil and Mexico) is up 2% year-to-todate, while EMEA and Asia are down 23% and 6% respectively,” says Chris Turner, head of markets and regional head of research for UK & CEE at ING.

“Even though we think the dollar can stay quite well bid for the rest of the year as the Fed takes the funds rate to 3.25/3.50%, dollar stability at the highs could see renewed interest in this high yield EM local currency bond space,” Turner and colleagues said on Tuesday this week.

A faster Fed is far from assured, however, as consensus suggests that U.S. inflation likely stalled last month and the Dollar remained soft on Wednesday despite data released on the prior session showing employment costs rising by a double-digit percentage last quarter.

The unit labour cost data is widely viewed as a leading indicator of wage growth, which the Fed and other central banks view as important influences on the trajectory of an inflation rate that rose to 9.1% in the U.S. last month.

Fed policy is an important influence on demand for the Dollar as well as other currencies and assets, hence the importance of the U.S. data.