The Pound to Dollar rate extended an almost nine day rally before being stalled by technical resistance on the charts after the Federal Reserve (Fed) indicated it would likely raise interest rates in unspecified smaller increments if market concerns about the trajectory of the U.S. economy prove to be well founded.

Fed policymakers delivered on market expectations when voting to lift the Fed Funds rate range by 0.75% for a second consecutive occasion on Wednesday, taking it up to between 2.25% and 2.5%, its post-financial crisis high and also the midpoint of the estimated neutral range.

But Chairman Jerome Powell offered relief to a bruised bond market and put a break on the U.S. Dollar when telling Wednesday evening’s press conference that the size of the next increase in rates will be decided by economic data the bank will be watching closely ahead of the September meeting.

“That will start with economic activity. Are we seeing the slowdown, the slowdown in economic activity that we think we need, and there’s some evidence that we are at this time. Of course we’ll be looking at labour market conditions and we’ll be asking whether we see the alignment between supply and demand getting better or getting closer,” he said in one part. 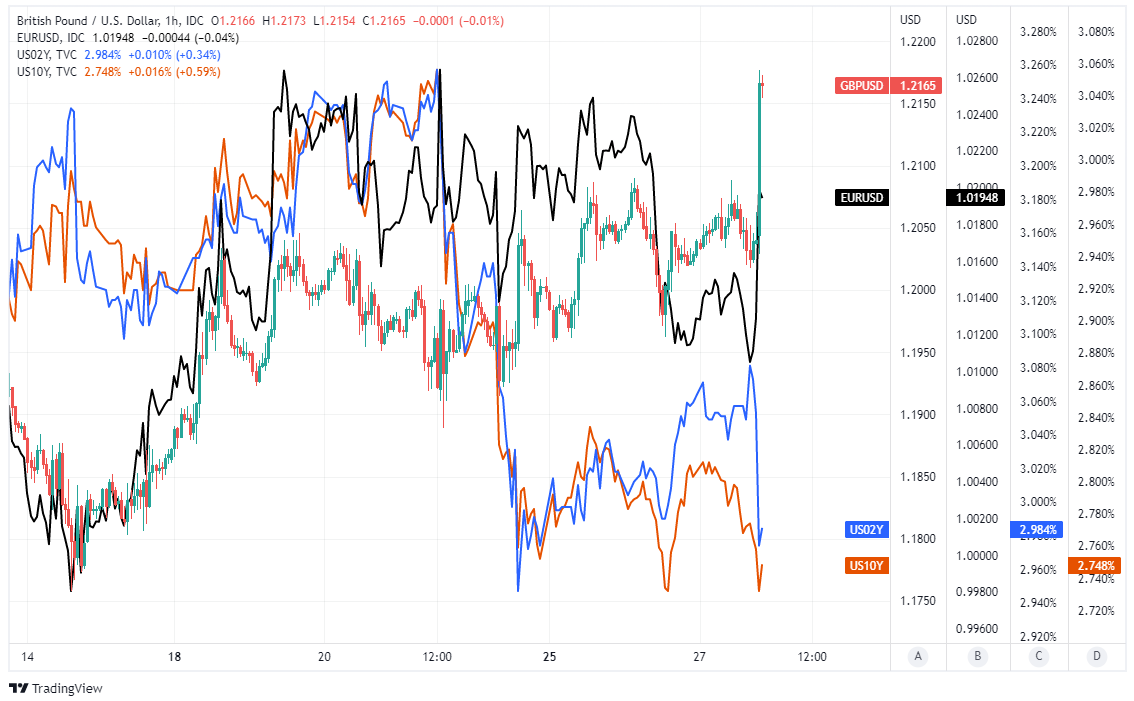 Above: Market reaction to FOMC press conference. Pound to Dollar rate shown at hourly intervals with EUR/USD as well as 02-year and 10-year bond yields. Click image for closer inspection.

Chairman Powell did not rule out raising interest rates by an “unusually large” 0.75% for a third consecutive occasion in September and reiterated that the Fed’s undivided attention remains fixated on bringing down an inflation rate which rose further in both overall and core terms at the last reading.

But he also made clear that the size of the Fed's interest rate steps was always likely to slow after reaching the neutral level and that any earlier than anticipated economic downturn could impact the bank's judgement about the extent to which interest rates still need to rise going forward.

That leaves a lot to be determined by U.S. economic data in the weeks and months ahead including Thursday’s second quarter GDP figures.

“So in light of all that data, the question we’ll be asking is whether the stance of policy we have is sufficiently restrictive to bring inflation back down to our two percent target. And it’s also worth noting that these rate hikes have been large and they’ve come quickly and it’s likely that their full effect has not been felt by the economy so there’s probably some additional tightening, significant additional tightening in the pipeline,” he said in one part. 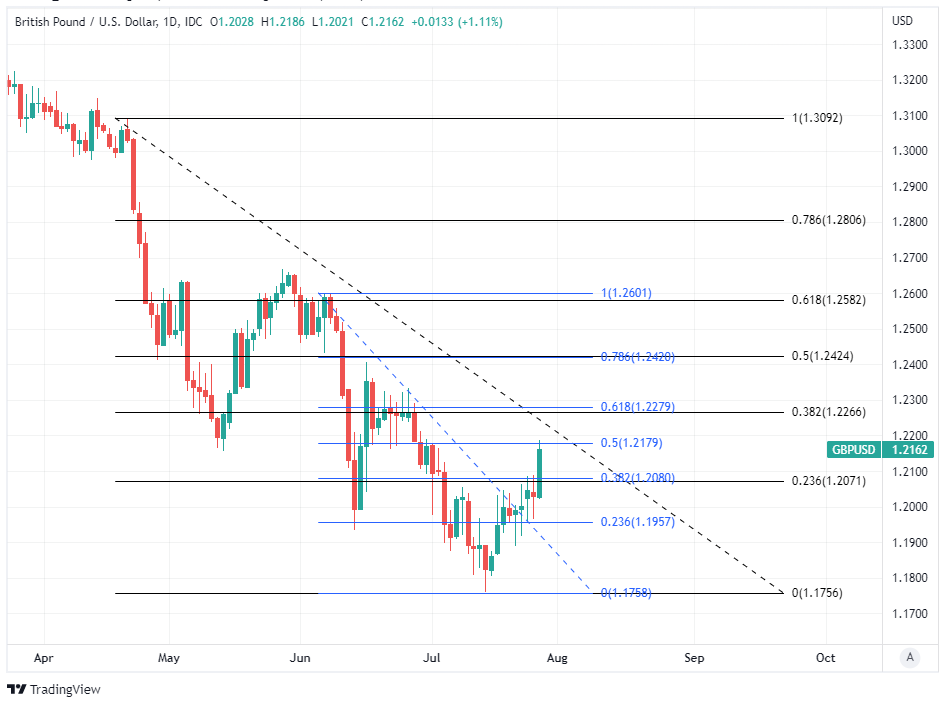 “We pretty clearly do see a slowing now in demand in the second quarter. Consumer spending, business fixed investment, housing and places like that. I think people widely looked at the first quarter numbers and thought that they didn’t make sense and might have been misleading in terms of the overall direction of the economy. Not true of the second quarter,” Chairman Powell also said later in response to a question from CNN Business.

Economists, analysts and financial markets themselves have all wondered aloud about the health of the U.S. economy in the months since the first quarter GDP suggested the economy opened the year with a surprise economic contraction, although the Fed has been circumspect about this notion.

Chairman Powell remained sceptical about the idea of the U.S. being close to a recession on Wednesday but the more cautious policy stance and acknowledgement that there are signs of a slowdown will ask difficult questions of would-be Dollar buyers in the weeks and months ahead.

These questions will ultimately be answered by the economic figures coming out of the U.S. ahead of the September meeting and by the decision at that meeting but in the interim, uncertainty about the policy outlook is potentially a roadblock in the path of the U.S. Dollar.

“The truth is we think that demand is moderating, we do. How much is it moderating, we’re not sure. We’re going to have to watch the data carefully,” Chairman Powell also said on Wednesday.