The Rand was lower by a fraction when compared with the Polish Zloty but had otherwise notched up gains over all of its major developed and emerging market counterparts for the day, month and 2021 year amid an ongoing run of outperformance by the South African currency.

South African outperformance has been described as bizarre by some analysts given the lack of an obvious domestic or international catalyst for its strength, which has coincided with increased optimism about the outlook for the U.S. economy and latterly a bottoming out of Euro-Dollar thus far in April.

"Local equities might not fare as well as the rand market despite Asian bourses outperforming and the S&P 500 notching up another record, albeit amid dwindling volumes on US exchanges,"  says Nema Ramkhelawan-Bhana, head of research at Rand Merchant Bank. 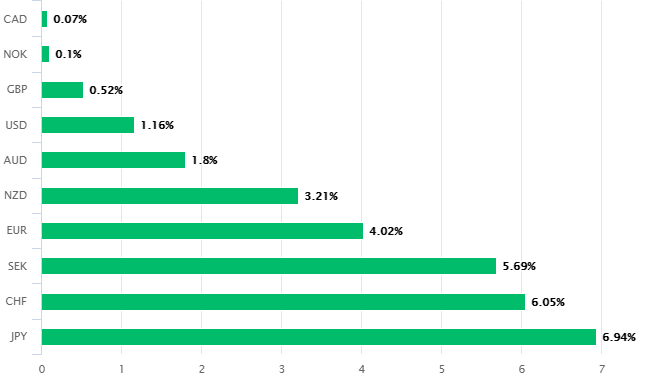 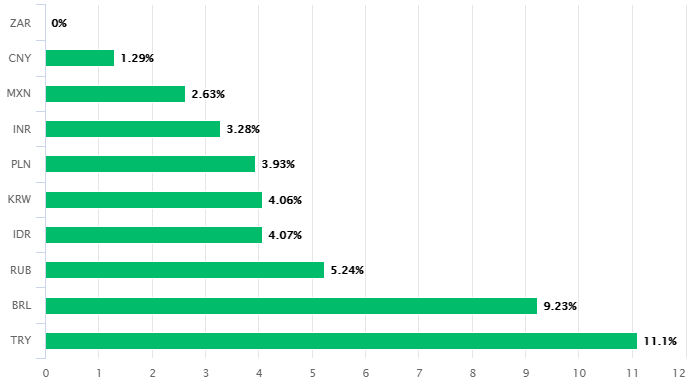 The Rand's comparative performance has been bolstered of late by profit-taking in certain developed markets that may have benefited key 'funding currencies' like the Euro, Swiss Franc and Japanese Yen, which were the only majors that South Africa's currency has declined against this week.

Funding currencies have risen in the last week while many of the earlier popular commodity and economic growth, like the Australian and New Zealand Dollars in the major FX sphere and the Mexican Peso as well as Indian Rupee in emerging markets, have fallen.

Weakness elsewhere in the emerging world has not reached South Africa's government bond market either, where prices have risen and yields fallen this month amid what some analysts have said is strong international demand for the yields on offer there.

Above: Correlation coefficients for USD/ZAR relative to G10 currencies over one week (left) and one month (right). Shows the Rand's correlation with the Euro rising in the last week, a response that may be little more than a mechanical default from the stabilisation of EUR/USD. Source: Ninjatrader LLC. Click each image to enlarge.

To the extent that this last week's Rand price action reflects an inflection point for the currency market and dominant trends of 2021, the Rand's ongoing strength and resilience throughout could be indicative of an underlying need or desire to appreciate further.

However, with the Euro and Renminbi showing signs of having bottomed out following a quarter of declines, the South African currency may have little choice other than to look to make gains over the Dollar and Pound if the overall trade-weighted Rand is to strengthen further.

China and Germany are South Africa's first and second largest trade partners while the U.S. and UK are its third and fourth largest while currencies of the former two have declined thus far in 2021 and currencies of the latter two have risen sharply. But if the market's appetite for U.S. Dollars has faded and the Renminbi has declined far enough then an ongoing downward bias in USD/ZAR and GBP/ZAR could be likely in the days, weeks and possibly months ahead.

"USD/ZAR is trading back at the 14.5044 December low below which lies key support at the 14.3952 February low. This we expect to continue to hold this week. If not, the 2011-2021 uptrend line at 13.8765 would be targeted," says Axel Rudolph, a senior technical analyst at Commerzbank, who sees little chance of the Rand making it below 13.87 currently. 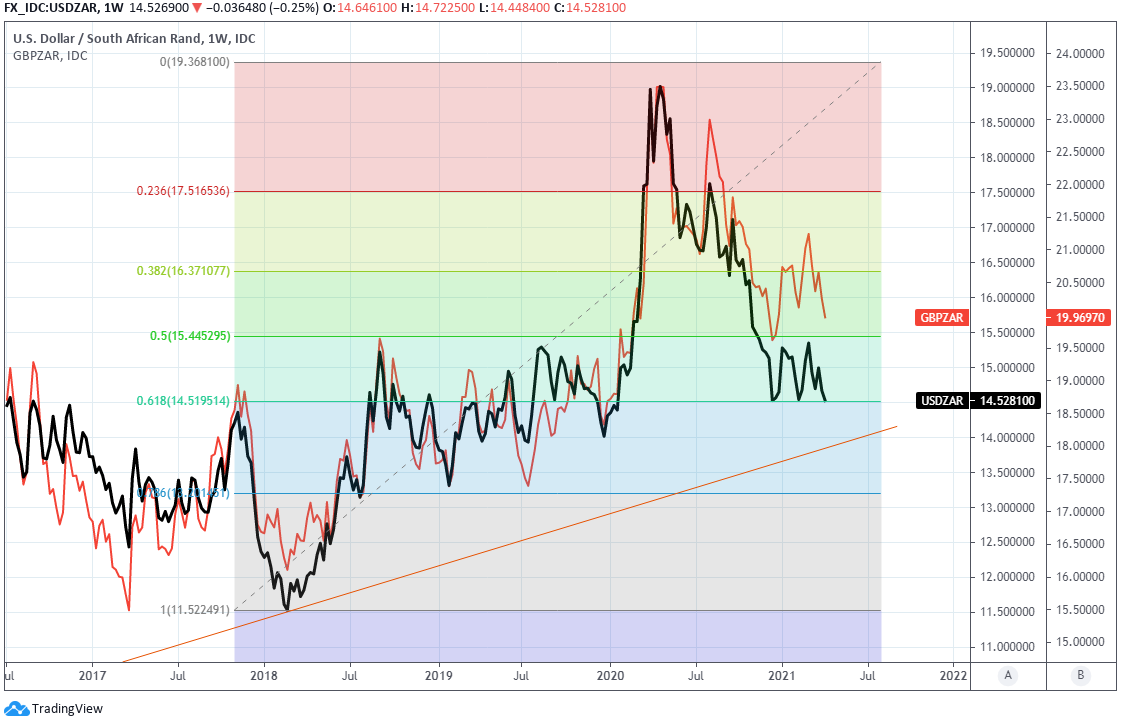 Above: USD/ZAR shown at weekly intervals with Fibonacci retracements of 2018 uptrend and long-term trendline. GBP/ZAR in orange. 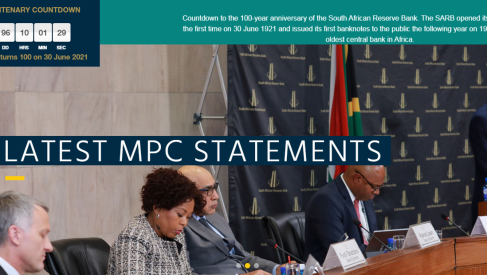 The Rand was soothed and the outlook for it smoothed on Thursday after the South African Reserve Bank (SARB) upgraded its forecasts and gave the currency market a not-so-subtle hint that it has no objections to a strengthening of South Africa's exchange rates this year.

Foreign exchange strategists at a leading European investment bank say they are compelled to retain an optimistic stance on the South African Rand's outlook.