The Euro-to-Dollar rate was finding its feet above 1.18 on Tuesday amid indications from the charts that its correction lower has all but run its course.

Europe's single currency furthered its recovery from 2021 lows near the round number of 1.17, which was almost seen last week.

Last week's low coincided with a turn higher by the relative-strength-index (RSI) on the daily charts and what technical analysts call "bullish divergence."

"EUR/USD’s low of 1.1704 charted last week was accompanied by a divergence of the daily RSI. Coupled with the fact that we have a 13 count on the daily chart and that we are close to the 1.1695 zone, 38.2% retracement of the move seen in 2020, we have exited remaining short positions," says Karen Jones, head of technical analysis for currencies, commodities and bonds at Commerzbank. "We have TD support at 1.1648 and the previous 2008-2020 downtrend lies at 1.1570 and we are reversing ahead of here."

Divergences between prices and oscillator indicators like the RSI are warning signs of a pending change in an underlying trend and in this case specifically, divergence suggests green shoots of a possible turnaround for the Euro.

Jones and the Commerzbank team turned bullish on Euro-Dollar Tuesday, buying at around 1.1805, but warned that the single currency could meet resistance at its 200-day moving-average around1.1882 and say it needs a recovery above 1.2014 in order to fully turn the tables on the Dollar. 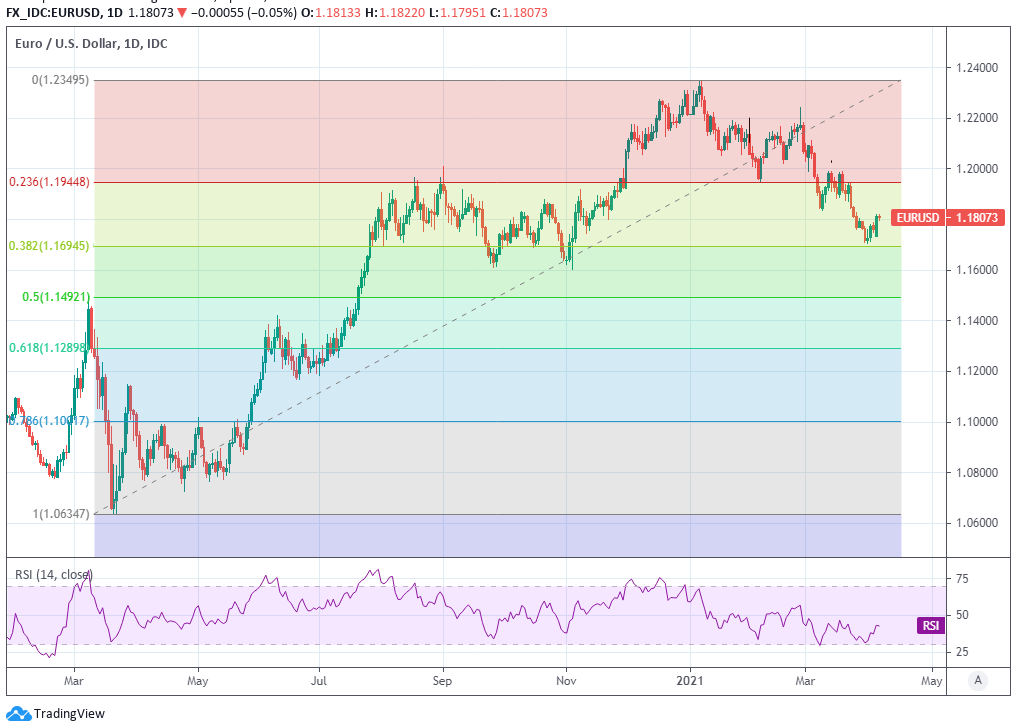 Above: Euro-to-Dollar at daily intervals with Fibonacci retracements of 2020 rally and relative-strength-index in lower pane.

The latter is something which likely requires Europe's third coronavirus wave to subside and for the bloc to make progress on vaccinations, given rising infections have recently seen Belgium, France and others returned to' lockdown' while the EU remains months behind peers on innoculations.

But with the trade-weighted Euro down more than 2% between the first week of January and the opening of April and with the charts suggesting a turn higher could be in the cards, it may be the case that the recent correction lower by the single currency has all but run its course.

"As long as the eurozone is locked in a challenging Covid situation vs the faster vaccination and stronger recovery in the US, the near-term upside to EUR/USD is limited and EUR/USD should stay below the 1.1900 level this week," says Petr Krpata, chief EMEA strategist for currencies and bonds at ING.

The Euro was higher against all majors except the Swedish Krona and Chinese Yuan early in a holiday shortened week where the economic data calendar is devoid of major event for Europe, leaving the single currency beholden mainly to investors' appetite for the Dollar and risk assets.

The main event this week for the Dollar is Wednesday's 19:00 release of minutes from the March Federal Reserve (Fed) meeting, following which it sought to convince markets that interest rates are unlikely to rise for years yet and that it's not even close to tapering its quantitative easing programme.

Dollars have been back in fashion in recent months owing to the combination of a swift vaccine rollout and extraordinarily large government spending on financial support for households, which has lifted expectations of the U.S. economy at a point where vaccine procurement troubles and a third wave of infections dirty the European outlook.

Appetite for the greenback may have been bolstered Tuesday by last week's blowout U.S. jobs report for March, with this being the first opportunity for Europeaninvestors to respond to it in light of public holidays, while Dollar buyers were evidently undeterred by last Thursday's FX reserve data from the International Monetary Fund.

IMF data showed the Dollar's slice of the global foreign exchange reserve pie falling to its lowest since 1995 in the final quarter of 2020, at 59%, reflecting a limited erosion of its status as the dominant global reserve currency as well as the evolution of the global economy. Meanwhile, the Euro's share was seen rising to $2.5 trillion and 21.2% of the total, which was its largest since 2014, in what may offer hope to European offficials eyeing a more prominent international role for the Euro.

"A fair bit of the decline over the last few quarters was due to valuation effects as the Dollar depreciated but the decline in Q4 can be partially attributed to active selling as well. The Euro, Yen and Renminbi were the main beneficiaries," says Michael Cahill, a G10 FX strategist at Goldman Sachs. "The Euro’s share has enjoyed a modest rebound and last quarter moved decisively out of the range where it has been stuck for the past few years."