Tuesday's trading session was choppy with the balance of flows tipping and turning between favour for the Dollar and currencies elsewhere in the world, though notably those in Europe as well as Asia, and with price action turning clearly against the U.S. unit by the close.

European currencies were outperformers while commodity currencies mostly declined in what were both novel developments by recent standards, with gains for the Euro, Swiss Franc, Swedish Krona and Japanese Yen more than offsetting declines in Sterling as well as Canadian and Australian Dollars.

"EUR-USD has retained yesterday’s gains even as the USD rallies against other G10 plays," says Daragh Maher, head of research, Americas head of FX strategy at HSBC. "An internal EU memo, seen by Bloomberg, projects that there will be sufficient vaccines for 70% of the adult population by the end of June, earlier than official EU forecasts currently project."

This left the ICE Dollar Index down around 0.2% and near 92.40, with price action coming amid European investors' first opportunity to respond to last Friday's blowout U.S. jobs report, which saw March numbers running far ahead of expectations while February's figures were upgraded sharply. 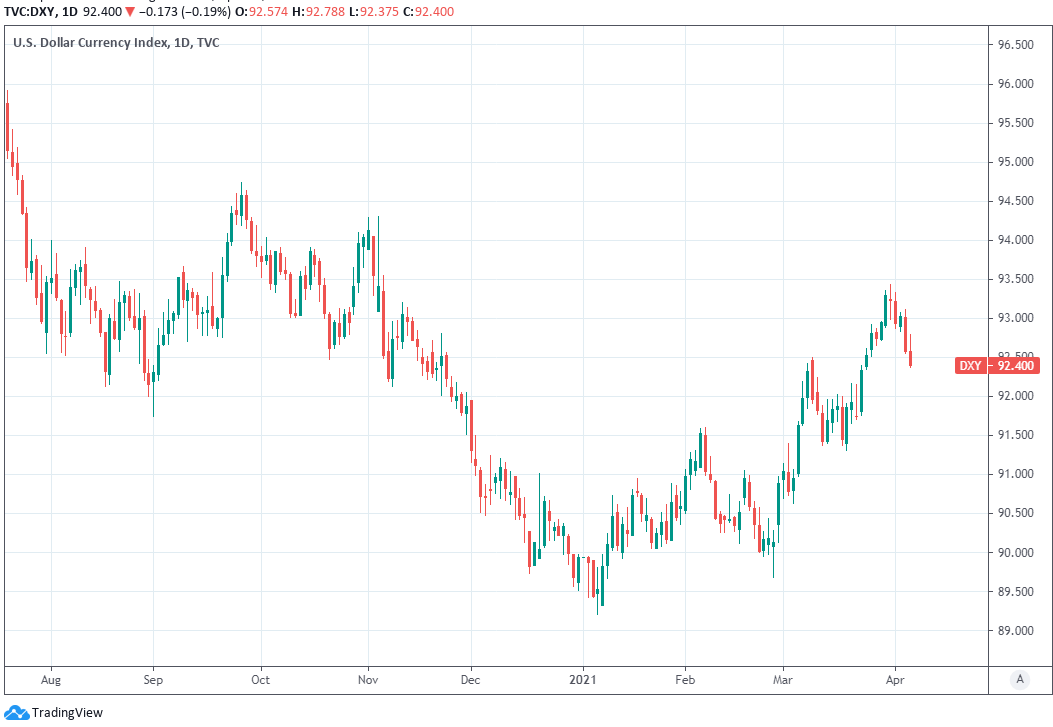 There were some 916k jobs created or recovered from coronavirus-inspired stoppages of activity in the U.S. last month, almost 50% more than the roughly 650k implied as likely by various consensus estimates, while February's jobs number was revised up from an initial 379k to 468k.

"It’s all about the stimulus combined with emergence from Covid lockdowns. The reaction in markets is another matter, and here the narrative is trickier to conjure up, particularly in the Treasury market. The over-the-top, strongest ever pace of improvement in the services sector, as represented by that ISM Services survey jump, merely elicited a shrug of the shoulders at the longest end of the yield curve," says John Hardy, head of FX strategy at Saxo Bank.

Payrolls growth and last week's Institute for Supply Management survey of the services sector both bode well for the U.S. economy, where recovery already began in earnest last quarter but is expected to be bolstered further by the effects of Washington's extraordinary financial support for households.

This all makes a curious sight out of the Dollar's losses on Tuesday and one which is in contradiction of the idea that U.S. economic outperformance would continue to drive the Dollar higher against other currencies in the coming months. More so after Tuesday's Eurozone job data disappointed expectations, with unemployment holding at 8.3% in March rather than falling to 8.2% as expected, while the U.S. jobless rate fell from 6.2% to 6% last month.

The two sets of job data illustrate divergent economic fortunes and given recently popular expectations for U.S. outperformance and resulting U.S. Dollar strength, they might have been expected by some to lift the greenback and burden the Euro on Tuesday, which accounts for 57% of the ICE Dollar Index.

But Europe's single currency rose emphatically back above 1.18, extending its recovery from near the round number of 1.17 last week, while technical analysts are mindful that a more protracted reversal higher may now be in the cards.

In addition quantitative studies of changes in trading activity across different time zones suggest the Euro could continue to rise this week, according to BofA Global Research, which recommended on Tuesday morning that clients buy Euro-Dollar as the quantitative teams preferred trade of the week.

"Our models expect EURUSD to turn higher and we are tactically bullish. The signal had emerged in positioning analysis last week and has persisted into this week," says Vadim Ilaralov, a quantitative strategist at BofA Global Research. "Positioning analysis shows USD continues to have more downside risk in the coming week. Compared to a week ago, the USD uptrends against EUR, CHF, and SEK now had flipped to showing reversal signals. On the other hand, the USD downtrend against GBP is set to continue."

Of high importance for Euro and Dollar price action in the weeks ahead, Ilaralov noted that the BofA Octave Model has withdrawn the Euro from its basket of funding currencies, which means the model and quantitative strategy team no longer advocate any 'carry trade' involving the Euro.

The Octave model is "designed to produce an optimal currency portfolio based on carry, momentum and valuation considerations," and takes direction from a range of factors including bond yields and changes in them.

The Euro was advocated widely as a "funding currency" from January, leading to widespread participation in a process that saw investors borrowing it with the intention of selling in exchange for currencies offering either higher bond yields, or simply better return prospects for other reasons. 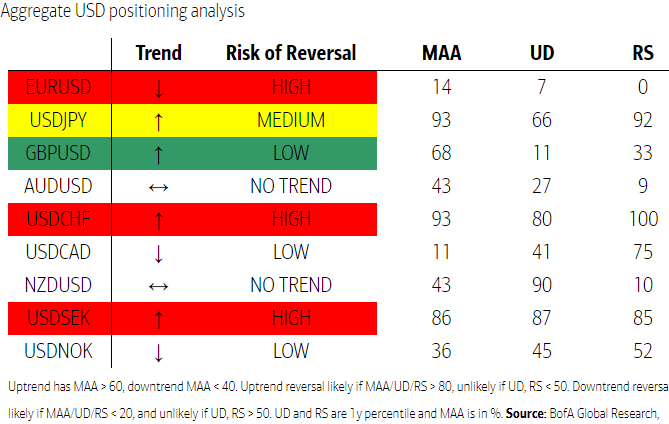 Commodity currencies like the Canadian, Australian and New Zealand Dollars as well as Pound Sterling all benefited greatly from the Euro's use as a funding currency during this period, and were all also among the most notable underperformers on Tuesday.

Commodity currencies would have to be sold and Euros bought back in order for investors to exit those Euro-funded trades, although the resulting increases in some European exchange rates wouldnt necessarily mean that those particular exchange rates are set to go on rising.

In at least some instances the exchange rate moves in question will be little more than a flash in the pan, although exiting wagers on the U.S. Dollar in favour of positioning early on for a European economic recovery later this year is what makes the most sense to some analysts.

"Beyond the next few weeks we think the main opportunity in G10 FX markets will be positioning for the likely recovery in European activity," says Zach Pandl, global co-head of foreign exchange strategy at Goldman Sachs. "We are keeping our 3m and 12m EUR/USD forecasts unchanged at 1.21 and 1.28, respectively. Clear evidence that Europe’s covid situation is getting under control would likely warrant fresh USD short recommendations."

There are numerous ways in which Tuesday's price action could yet be rationalised but if the Euro bid is sustained through the week then it may quickly look like a 'buy the rumour and sell the fact' response from investors to a strong indication that the U.S. recovery is well and truly under way.

That would have implications for other economies, but especially for those running trade surpluses with the U.S. These would benefit most if and when American demand for imported goods begins to rise with consumer spending.

The Euro, Swiss Franc, Yen and Yuan were the big risers against the Dollar on Tuesday and they all underwrite big trade surpluses with the U.S. 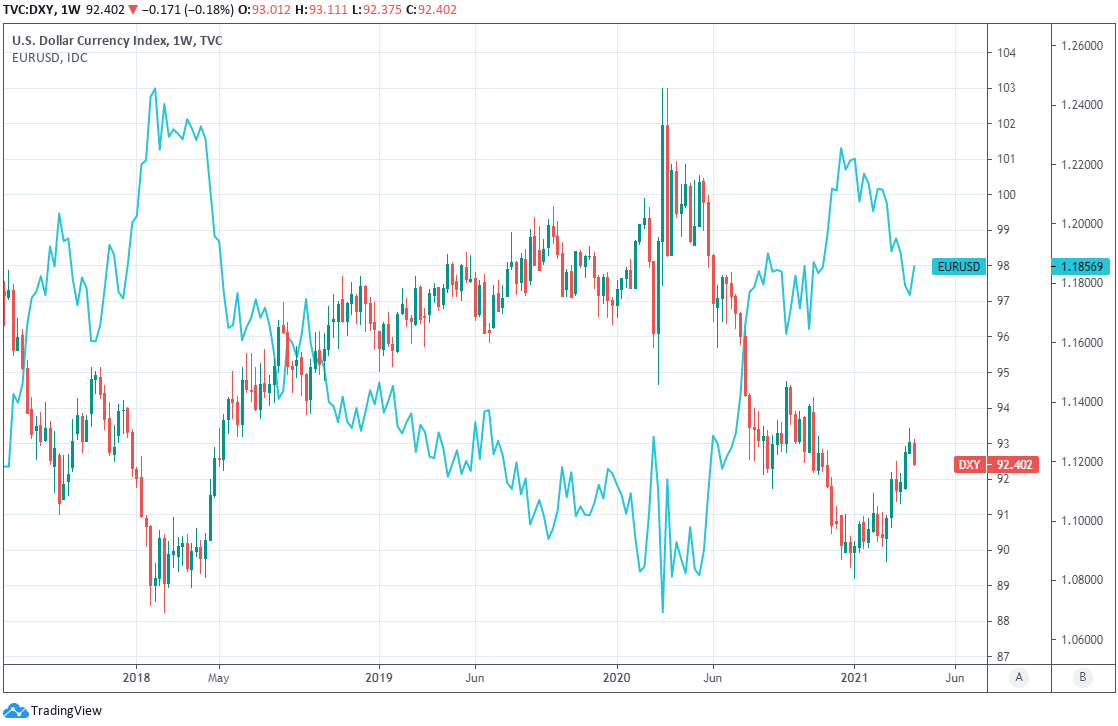 Above: U.S. Dollar index at weekly intervals with EUR/USD (blue).